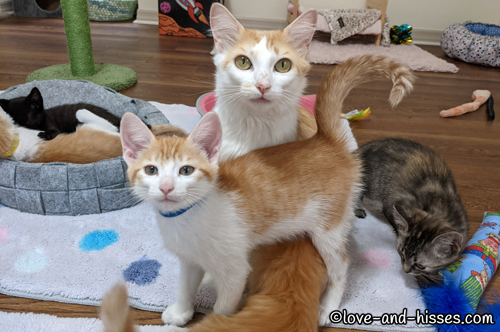 Alfie Alfredo’s trying to imitate Molly Marinara’s “Is it time for treats yet?” face, and I’d say he’s doing a pretty good job of it. (Please also note: Theo Pesto at the milk bar and Tia Teriyaki checking to see if there’s room at the milk bar.) 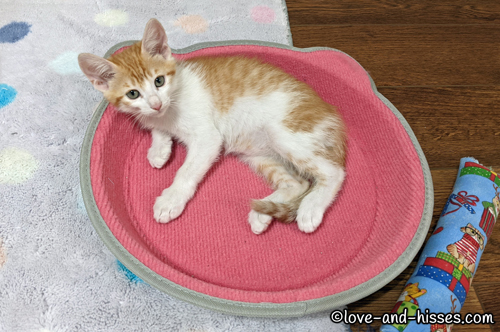 It’s an Alfie Alfredo pie! (Side note: I’ve been meaning to mention this, but keep forgetting – the pie plate scratchers are BACK IN STOCK and you can get them here! Can’t beat that price, and look how cute!) 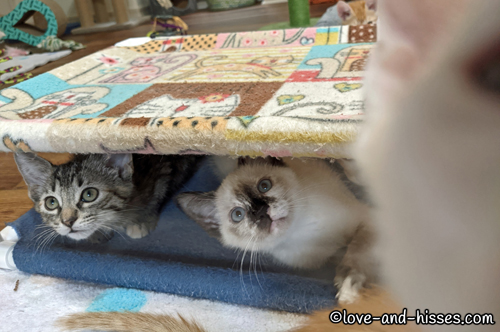 Tia Teriyaki and Hannah Hollandaise were playing under the ham-mick, and I was trying to get a picture of them when Christopher Chutney was all “WHAT IS GOING ON HERE?!” 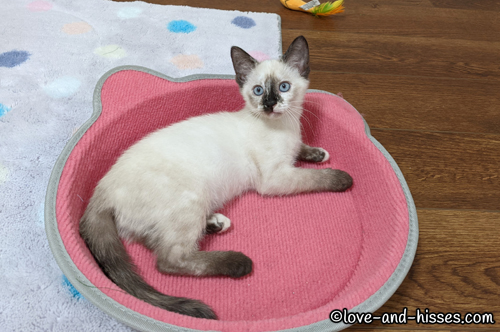 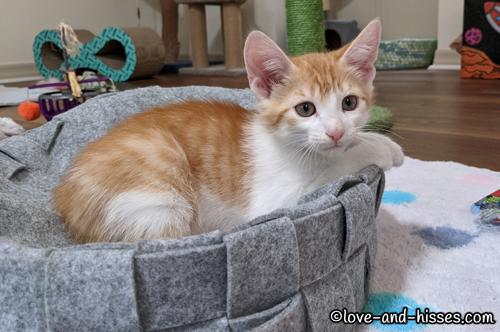 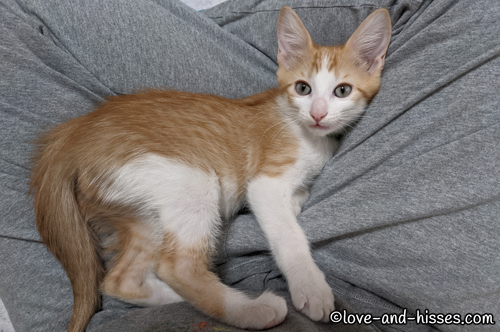 Franco Fondue in my lap. 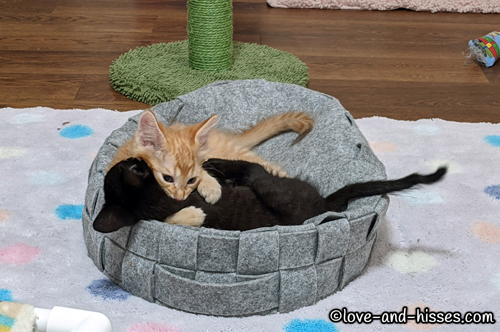 Theo Pesto and Sofia Soy Sauce in: Fight! To! The! Death! 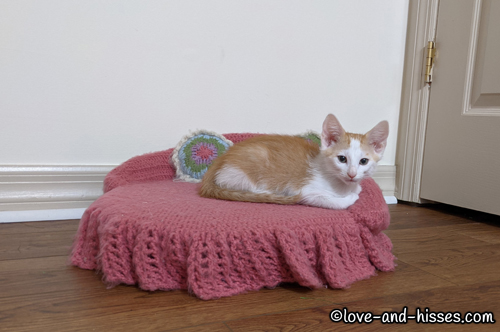 That’s a fancy Christopher Chutney on his fancy sofa. 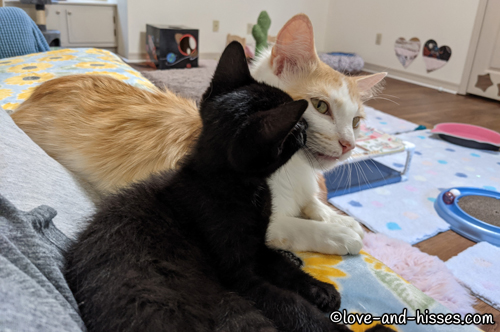 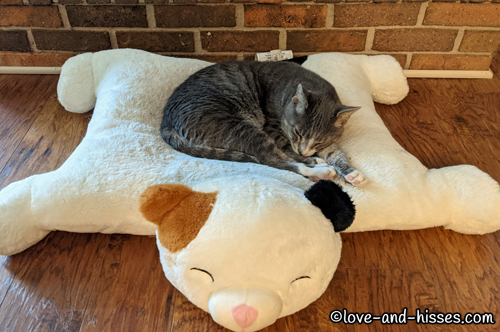 Archie is comfy. (That bed was Charlie’s favorite in the last house, but he spends more time in the ham-mick these days, so Archie claimed it.) 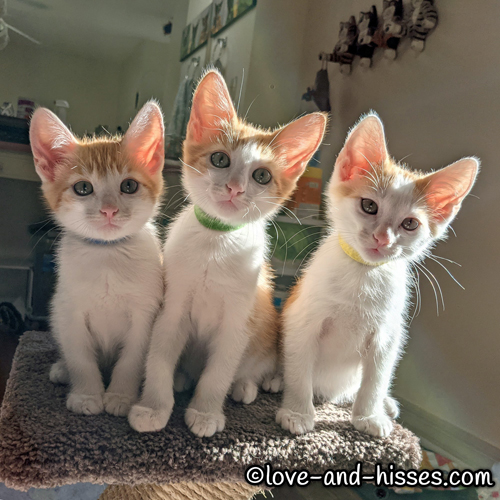 Did you know that these three little muffin heads are still available for adoption? Their descriptions are below, but let me summarize: they’re cute, they’re sweet, they’ll allow a cuddle, and sometimes they’ll even seek one out. They’re super energetic, love to play, and love to eat. They’re awesome!

Need a kitten or two or three? Email Forgotten Felines of Huntsville at info (at) ffhsv.org to inquire. All kittens must be adopted with another kitten OR be joining a home with another playful cat in residence. We’re located in Huntsville, Alabama and adopters must come here to complete the adoption. We tried putting kittens in tiny planes and letting them fly themselves home, but the cockpit controls were too hard to maneuver – they ain’t got no thumbs. 😕

Alfie Alfredo (male, date of birth 6/4/21) was one of 5 kittens born to Molly Marinara. Alfie Alfredo is, shall we say, a little on the dramatic side? He talks, he hisses at new things, he floofs at the drop of a hat, and then he gets over himself because underneath his dramatic ways he’s just a sweet little snugglebug. Alfie’s usual immediate reaction to new things is “NO THANK YOU,” but once he’s had a few moments to suss out the situation, he nearly always changes his mind. New food? NO. Okay, wait, this is kind of tasty. New kitten? NO. Well, wait, this could be a fun friend. New toy? NOPE. Oh wait, he means YEP. And so on. He’s a very playful kitten and will run run run until he drops for a nap. He loves to pile up with his siblings for a snooze, and then he’s up and running again. He loves to play with ping pong balls, toys with feathers attached, and he loves to leap up after feather teasers. He enjoys a good track ball toy and tussling with his siblings, and every now and then he’ll come looking for a snuggle – but not for too long, ’cause he’s got things to DO. He gets along great with his siblings and though he would likely initially be somewhat hissy toward new cats, he should adjust pretty quickly.

Christopher Chutney (male, date of birth 6/4/21) was one of 5 kittens born to Molly Marinara. We like to think that Christopher Chutney’s mama was trimming his bangs and lost control of the trimmer, so he ended up with those lovely super-short bangs. He’s a fashion icon! Christopher Chutney is the goofball of his litter and can often be spotted rolling around on his back with his feet in the air, popping up to grab a toy or a sibling, and then skittering sideways across the room to jump on a sibling or a toy or nothing at all. He’s a lapkitten and enjoys a good snuggle after he’s eaten, and might even snooze on your lap for a bit if you’re very very still. He loves to leap up after the feather teaser, enjoys chasing ping pong toys that you toss for him, and particularly likes to carry toys around in his mouth. He gets along great with his siblings and would do great with other cats.

Franco Fondue (male, date of birth 6/4/21) was one of 5 kittens born to Molly Marinara. Franco Fondue is everyone’s friend – he’s the most confident kitten in his litter, was the first to climb into his foster mom’s lap, and when he’s grabbed up for a kiss he just smiles, tolerates it, purrs a lot and patiently waits to be put back down so he can race off to play. He views new things with interest, and if there’s a toy tossed for the kittens, he’s the first one to run after it and grab it. He loves to boing up in the air after the feather teaser, is 100% sure he will solve the mystery of the track toy, and if you toss a ping pong ball, a rattly mouse, or really any toy at all, he will race right over to investigate. He loves a good belly rub (when he can slow down enough), enjoys a snuggle, and loves to pile up with a sibling or two to nap. He gets along great with his siblings and would do great with other cats. 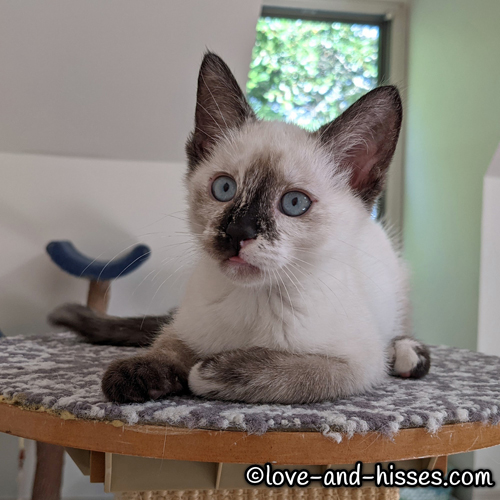 Oh, that Hannah Hollandaise. What a cutie!

YouTube link
Tia Teriyaki is NOT sharing her toy. Now, no one’s ASKING her to share, but she’s making sure they know anyway. Better safe than sorry! 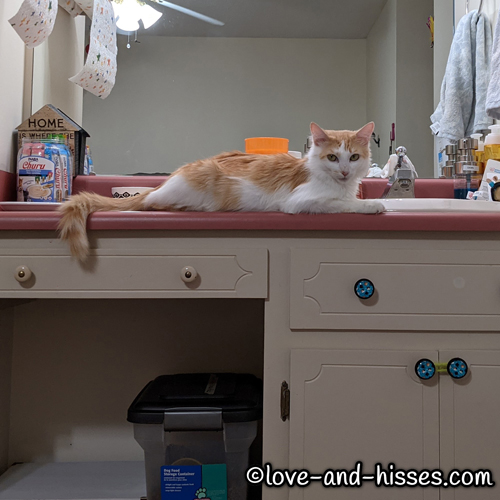 In case you were wondering, this is where Molly Marinara goes to get away from her kittens. I tried putting a cat bed up there, but she wasn’t having it. I’m sure the cool counter feels good on her belly. (She also gets her breakfast and dinner up there, too. Otherwise the kittens will abandon their food and eat hers even though it’s the exact same food.)

YouTube link
Someone specifically requested a kittens-eating video, and – well – this is what I came up with. I suspect the tornado siren in the background doesn’t actually add to the ASMR experience, but not bad for a first try, I guess. 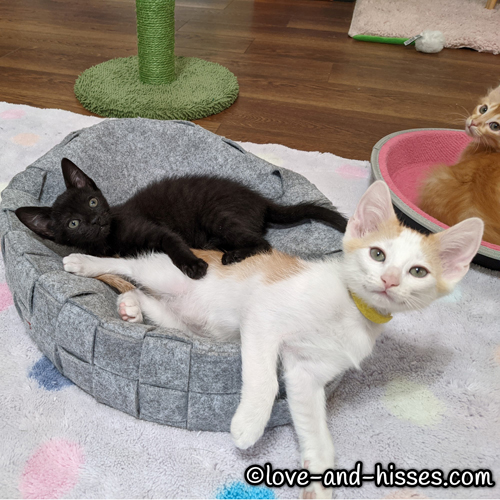