(Not that I’m asking you to send me anything, but a few people have asked. You can also find it over there in the sidebar about halfway down.)

Hannah Hollandaise is quite bit older that the rest of the dippers isn’t she. She is part of the meezers that are taking a break from PetSmart (right?), and they are like 3 months but just very tiny. They are a hoot btw super active, cute ant talkative – Hannah seems to be a lot calmer.

Yes, she’s a sibling to the kittens who were briefly at Petsmart and are taking a break at Michelle’s (I think?) She is definitely older than the rest of the Dippers – size-wise she’s almost exactly the same size as the orange and white boys, all of whom are now just over 2 pounds – and so we assigned her the same date of birth. But watching her this past week and a half, I think she’s probably a few weeks older, just happens to be on the small side.

Believe me, I need to get video of that girl racing around the foster room – she’s not as calm as she’s seemed so far. She’s super playful and is forever jumping on the other kittens, making them hiss, and then racing off again. She’s a blast!

Has Uncle Charlie met Molly and the Dippers?!

I guess Charlie visiting the fosters isn’t in the any-time-soon category?

We’ve been talking about putting Molly Marinara in the sitting room and letting Charlie in to meet the kittens. We haven’t done that yet, but I’m sure we will one day soon. I’m not comfortable with the idea of letting Charlie in to meet them with Molly in there, because I don’t think Molly would handle it well – Charlie’s a big cat, and I imagine she would surely see him as a threat.

I guess it’s safe to say the Permanent Residents are pretty relaxed in the new house now?

I’d say the permanent residents are nearly completely relaxed now. It helps that they can go into the back yard during the day, and that there are two ways out into the back yard (more about that in a future post.) They’re still deciding on their favorite spots, but they’ve settled in and they know the routine.

Dewey is still SO camera shy and it’s frustrating – but I am posting an old picture of him at the bottom of this post so y’all don’t forget what he looks like!

Charlie’s hammick keeps shrinking! He’s such a long, tall glass of water. How much does he weigh now?

He was 13 1/2 pounds in mid-June; I don’t think he’s gotten much bigger, but I’ll report his weight after his vet visit in a couple of weeks.

Regarding weaning, will you be using the Weansie again?

I don’t plan to at this time because I think Molly Marinara is weaning them on her own – though I may pull it out if I think I need to.

Khal’s floof could substitute for a swiffer!

it certainly could! I wonder if he’d let me tie him to a stick and push him around the floor to pick up all the roaming dust bunnies.

I’m reading the various questions you were answering above, and got to the one that started “…Kia Soul…”, and my brain is all “wait, which one is Kia Soul?? Did I miss a new singletons!?”.

Kia would be a good kitten name!

Now that you’ve been in the house for a couple of weeks, how is the foster room working out for you? What changes are in store for that room (other than a new paint job)? Have you chosen a color yet?

It’s actually working out really well so far! The only change that really needs to be made is that I need a storage cabinet or small dresser to replace that plastic organizer next to the sink. Oh, and I need some sort of small desk or table to put those darn kittens on so I can take their pictures properly. I haven’t even thought about a paint color yet – repainting that room is far, far in the future because it’s fine for now.

I really like how you’ve expanded your (kitten-eye-level) mirror collection over the years…and the shapes! Where are you finding such unique mirrors? 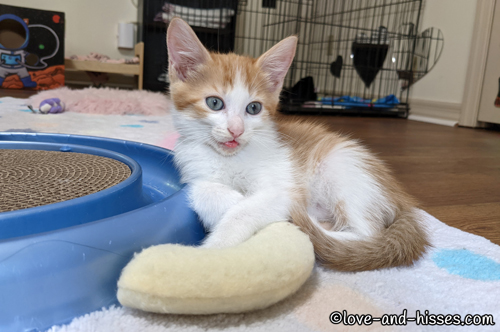 Franco Fondue and the blep. 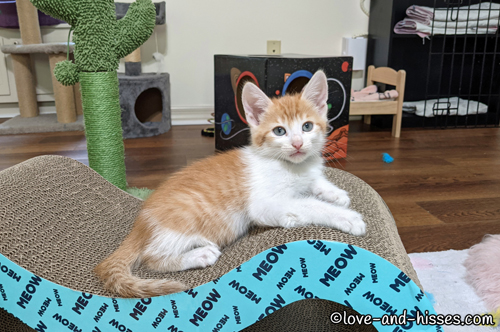 Alfie Alfredo and the pout. 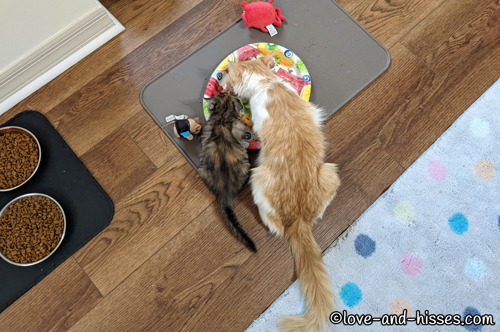 Tia Teriyaki’s having lunch with Mama. 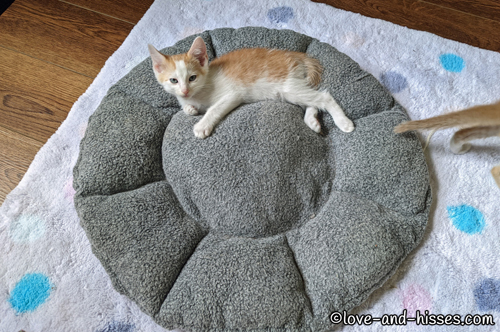 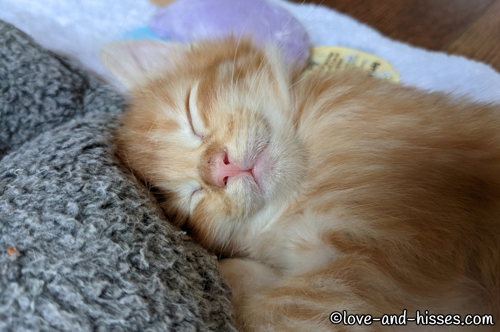 Oh, Theo Pesto. How have you not been squooshed flat by now? 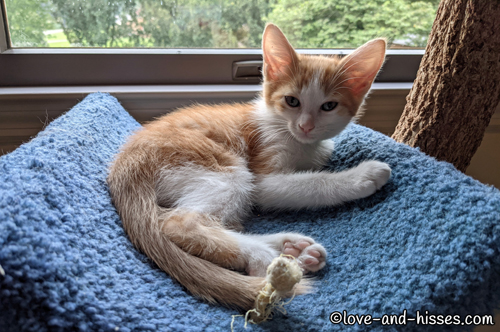 Not sure I’ve ever noticed the magnificence of Franco Fondue’s ears before this moment. 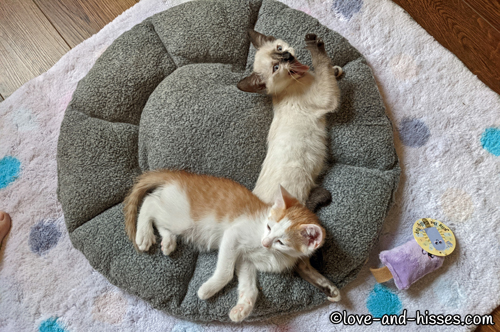 Hannah Hollandaise is raaather pleased that she got a snuggle in with Christopher Chutney. 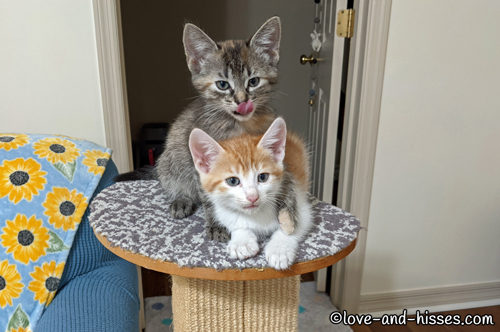 Tia Teriyaki and Alfie Alfredo have a… well, I’d say it’s a snuggle but in actuality she had just been gnawing on his neck. 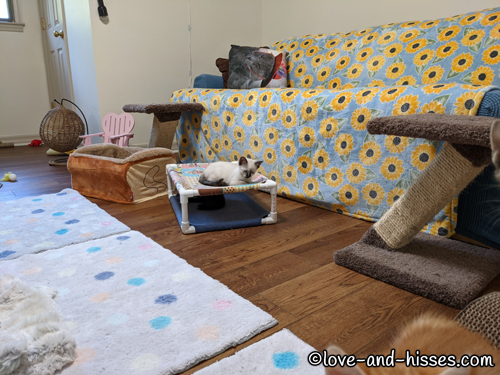 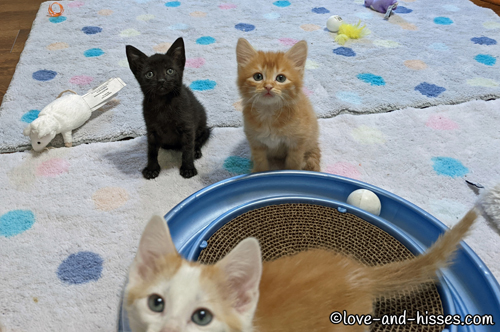 There might’ve been a feather teaser up there. Sofia Soy Sauce and Theo Pesto in the back; Christopher Chutney in the front.

So Molly Marinara seems to have decided that Hannah Hollandaise is not a threat to her kittens. I left Hannah in the foster room all day yesterday (with many checks to see how things were going), and there were no kerfuffles. In fact, Molly is pretty much ignoring Hannah, and if Hannah jumps on one of the other kittens and makes them growl or hiss, Molly ignores that too. I don’t know that Molly and Hannah will ever be buddies, but Molly tolerates her, and that’s way better than I would have expected even a couple of days ago. So, yay! (I did get the pink onesie in the mail yesterday, but I’m not planning to deploy it at this time.) 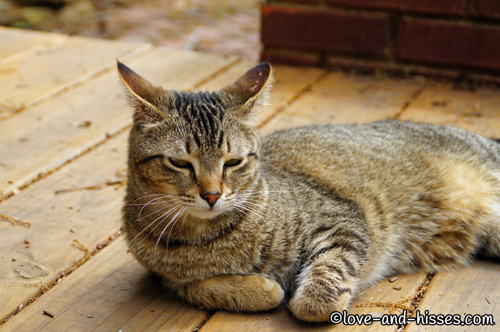 An old shot of Dewey so y’all won’t forget what he looks like. I haven’t gotten one solitary picture of him in this house – if anything, he’s become more averse to having his picture taken since we moved. He’s doing just fine – he was one of the first ones to really settle in – but if I even think of taking his picture he’s off like a shot. I don’t know what his issue is – maybe he’s on the run from the law. Maybe he’s in witness protection! – but he’s the boss. I’m going to stop trying to take his picture, and if at some point in the future he decides he’ll let me get the occasional shot, well, we’ll consider ourselves lucky.