That’s Toby (formerly Charming), checking out his (of course!) favorite web site. He used to be my spell check assistant when he was here with us, and clearly he wants to keep an eye on my spelling just to make sure I’m spelling everything rite. 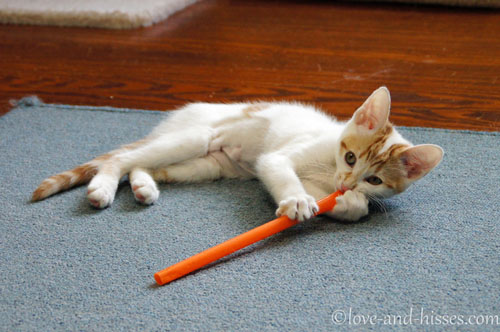 Ember looks like she’s playing the flute (it’s actually an oversized straw. I’d tell you where I got it, but I don’t remember. Possibly I got a pack at the dollar store.) 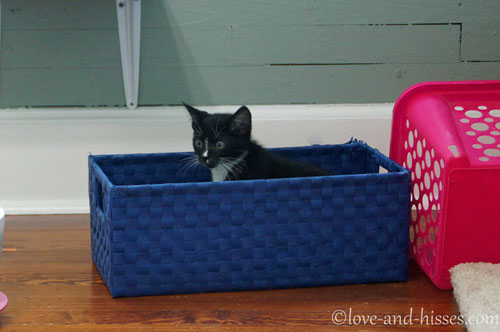 Norbie’s got himself some crazy eyes. 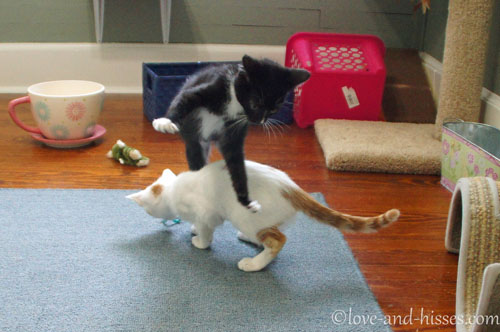 Norbert is the lightest-on-his-feet cat I’ve ever seen. He’s always popping straight up in the air or jumping over his siblings for reasons known only to him. 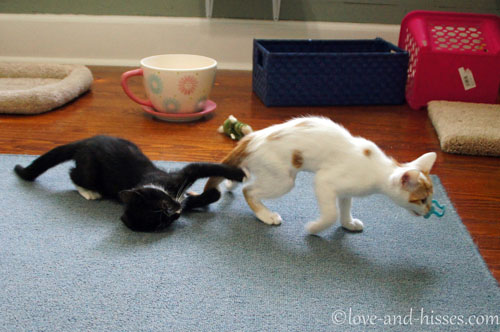 “Wait, where ya GOING, come and PLAY with MEEEEE!” 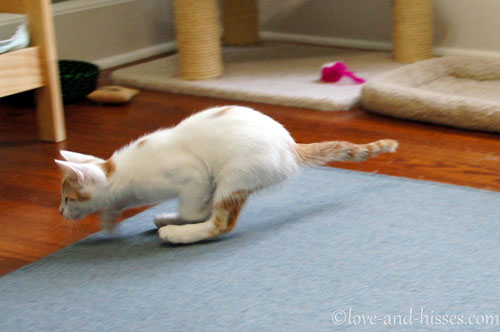 Ember’s got other places to be. 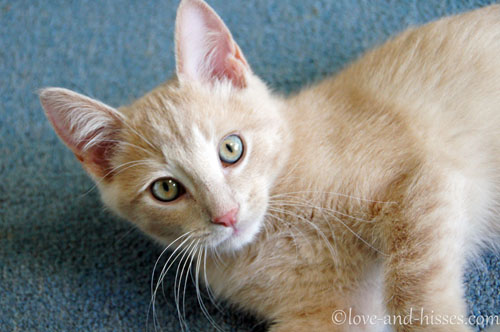 Scorch shows off his pretty eyes. 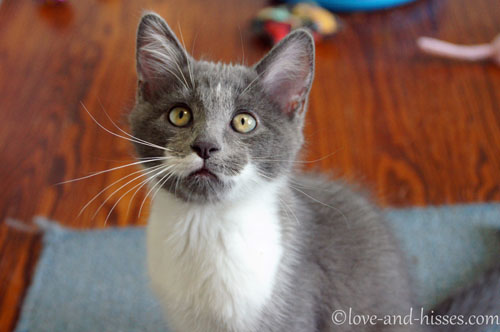 And Puff shows off HIS pretty eyes. 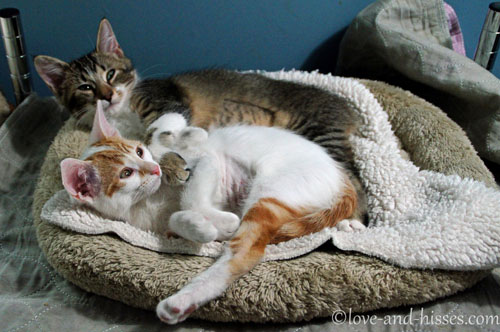 The Dragon girls are wondering who turned that bright light on, and could they perhaps turn it back off? 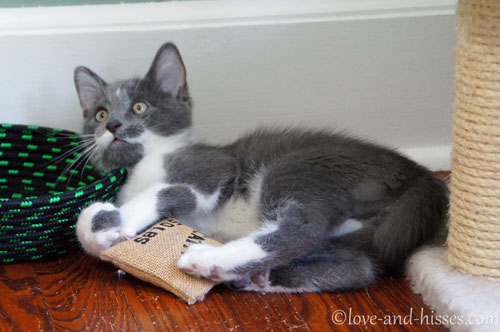 There he goes, lookin’ loony again. 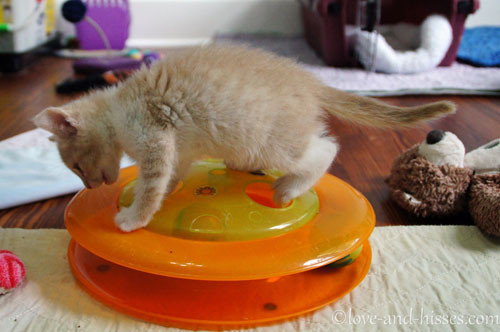 Hodor talks to the trackball toy. “Hodor!” he scolds. 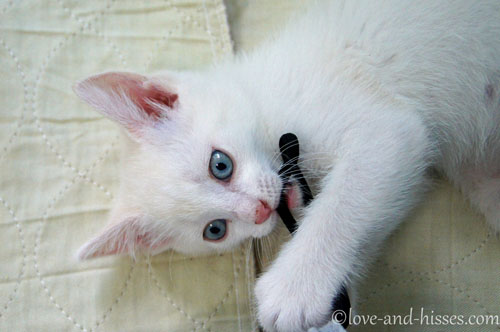 I was taking pictures with my big camera and had the little one in my pocket. Jon Snow found the cord to the camera and claimed it as his own. 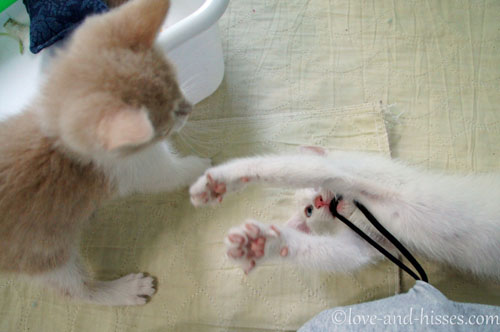 “You get away, Hodor! This is MY string!” he said, flailing his paws all over the place.
“Hodor!” said Hodor dismissively. 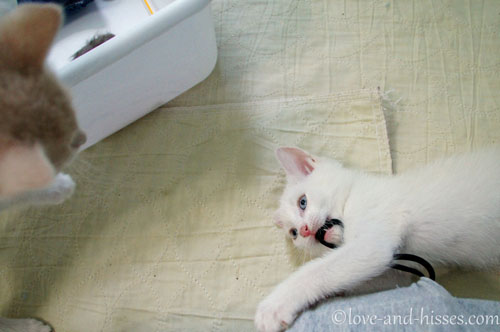 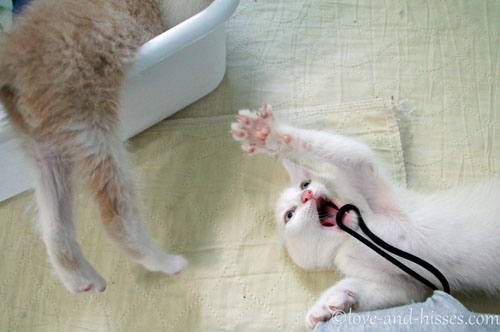 “MINE! MINE I SAY!”
Hodor said nothing, because he found more interesting things to occupy his attention. 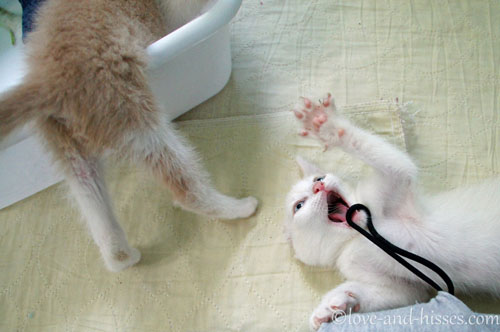 “I am showing you my Paw o’ Doom so you don’t think you can sneak back here and take this string from me!”
Hodor didn’t even hear the threat from Jon Snow. 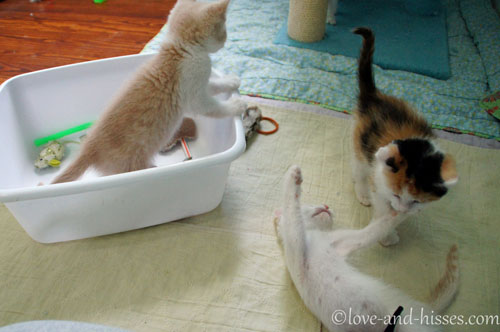 “Hey! I see you lookin’ at my string! I’m going to kick your butt!” Jon Snow said to Arya.
Hodor set sail in his dishpan, hoping to find friendlier waters. 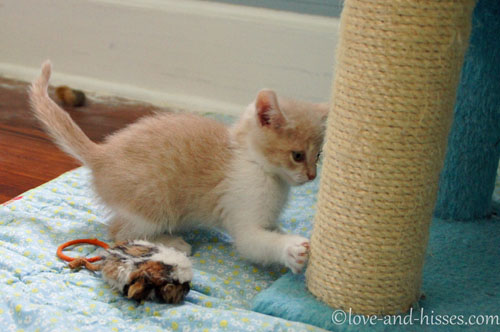 “Hodor!” he said triumphantly when he hit land, and claimed the little blue cat tree as his own. 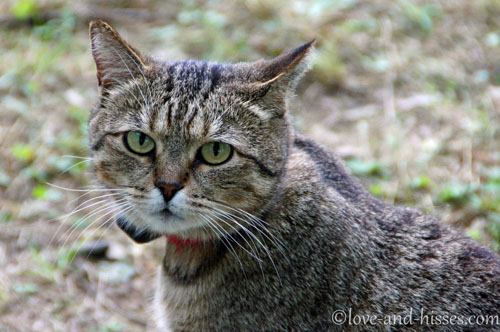 Sheriff Mama (aka Kara) would like you to know that she SEES what you’re doing, and is considering placing you under arrest.

If there’s anything Sheriff Mama loves NEARLY as much as putting little rapscallion kittens under arrest for having a bad attitude, it’s Snackin’ Time. She always seems to be hanging out in the back yard when it’s time for Snackin’, though, so I have to call her in. I got a couple of videos of her racing for the back door; in the first one she was on the patio when I called, and in the second section she was on the platform in the middle of the yard and had to get down from there before she could run for the back yard.