Meet Tenuki – he needs a home. 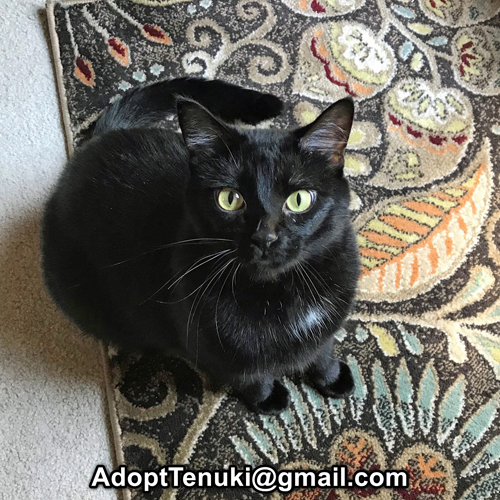 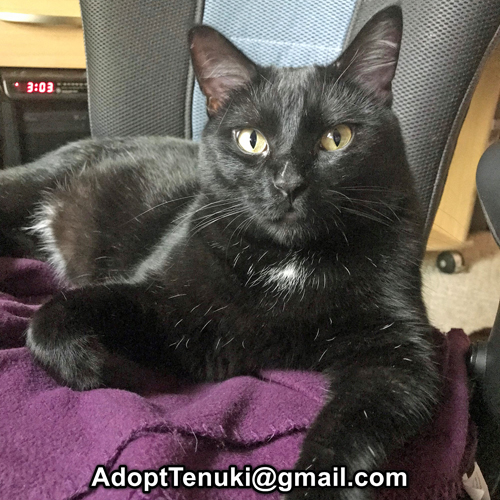 Lori has asked for help finding Tenuki a home. Here’s his story: Tenuki and his 3 brothers were born on August 21, 2019 to a feral mother cat. She showed up pregnant (of course) on the doorstep of Lori’s brother’s house, and by the time she gave birth, she trusted him completely. Lori’s brother took in all 4 kittens and their mother and cared for them, and Lori eventually took two of the kittens. Unfortunately, in January of this year Lori’s brother passed away from cancer. Lori brought home three of his cats and hoped that the brothers to the two kittens she’d taken in would be friends the way they were when they were kittens. One of the cats gets along fine – the other, as you may have guessed, is Tenuki.

Despite the very slow introduction, the use of Feliway, making sure everyone has room to have their own space, Tenuki just doesn’t get along with his brothers, though he gets along fine with the older female cat. (They are all neutered and fully vaccinated.) It got pretty bad, with injuries sustained during the fights, so currently he’s spending most of his time in a bathroom, but he gets time out to explore the house in the afternoons when the other boys are napping in a bedroom with the door closed. Lori’s been trying to find a home for Tenuki with no luck – and of course, she worries that as a black cat if she takes him to the pound he will ultimately be euthanised.

Lori says of Tenuki: He’s a sweet cat with a big personality (he’s kind of like the cat version of Chris Farley). He gets along fine with all sizes of dogs and my spayed, older female cat. He can play a little rough at times, but he’s never tried to play with my older female cat at all and has never chased her, but he did do those things with his brothers which caused some of the issues, I suspect. He loves to play with track ball toys and feather teasers and is a big talker. He will often come to you if you call him. I will also say that he’s one of those cats that will put his teeth on your arm. It’s like a bite, but he’s never broken the skin or really applied any sort of pressure. He usually does that when he’s happy. He likes to be held over your shoulder and snuggle up with you. He also likes to stretch out in your lap in front of the TV or sit in my office in the chair next to mine. He also loves being up high on the cat trees. He’s not declawed and is very good about using the scratchers. He’s not really spent any time outdoors except when he was a kitten. He’s fully vaccinated, neutered, and in good health.

Lori lives in central Illinois and would be willing to drive up to 12 hours in any direction to ensure Tenuki a loving home. If you or someone you know might be interested in learning more about Tenuki, please email AdoptTenuki (at) gmail.com to find out more information. Please spread the word and help us find this sweet boy a home! Thank you.

If you’re not following the Forgotten Felines of Huntsville online auction (on Facebook), you may not have seen… 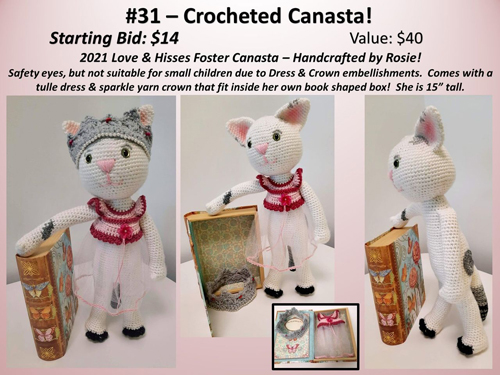 This crocheted Canasta! Complete with her very own crown, wearing an adorable dress. Is this the CUTEST, or what? 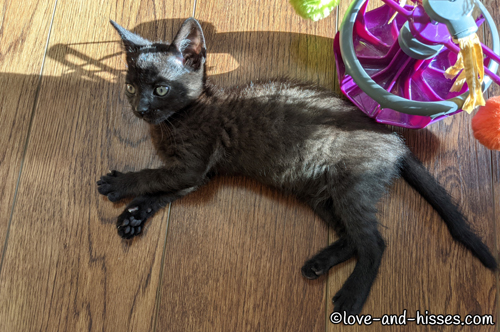 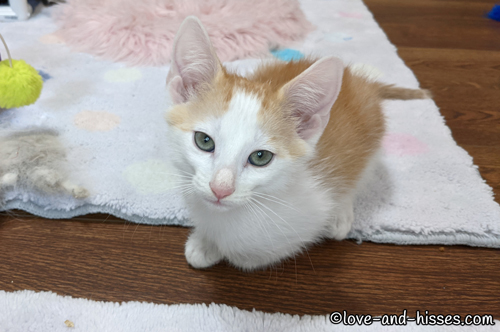 Christopher Chutney and the face of “Seriously, lady?” 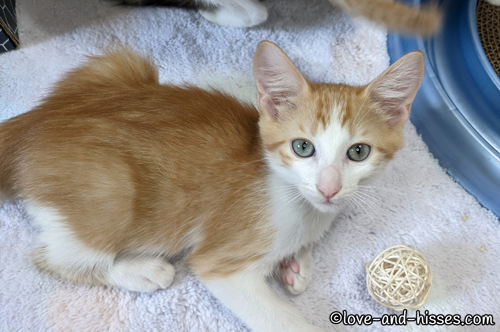 Oh, that Franco Fondue. Does he need a squeeze? I think he does! 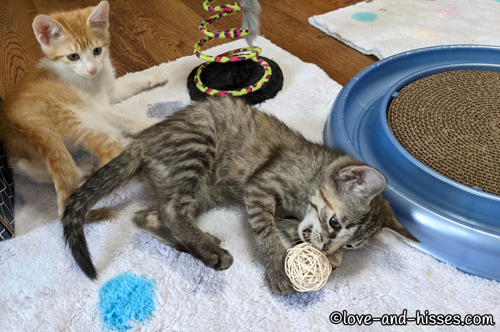 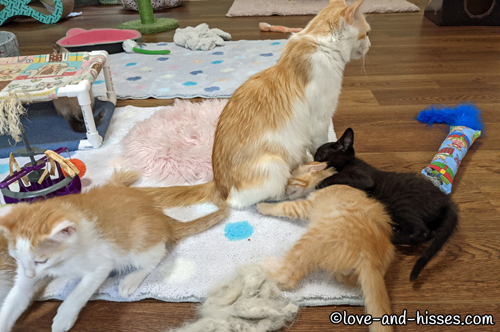 I can’t swear to it (I wasn’t watching the moment before I took this picture), but I think Theo Pesto was nursing, and Sofia Soy Sauce pushed him away. 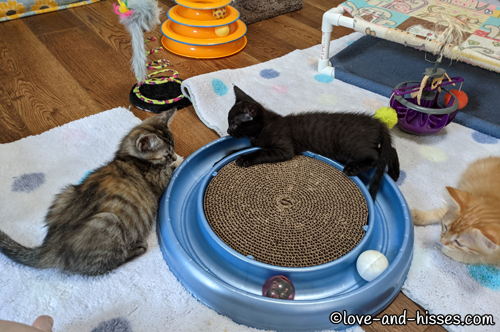 Sofia Soy Sauce doesn’t fit in the track as well as she used to. She’s now (barely) a member of the 2-pound club, after all! 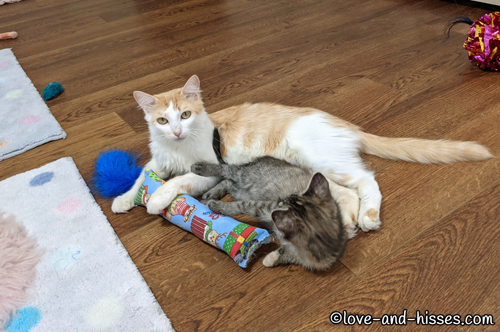 Poor Molly Marinara. “Just wanna hang out and play with my kicker toy, lady. Is that so much to ask without this little whippersnapper barging in?” 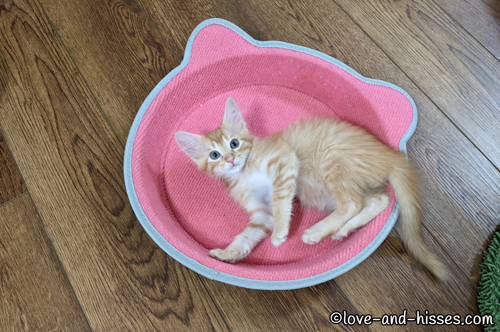 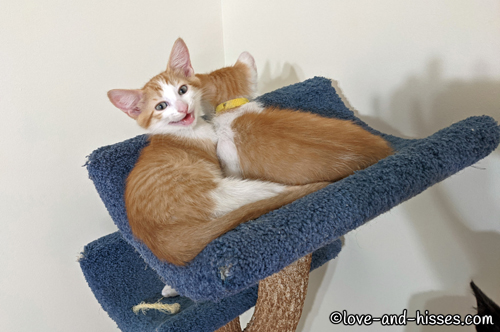 Franco Fondue and Christopher Chutney were sleeping in the cat tree. I tried to get a shot of them sleeping, but Franco Fondue was too fast for me. 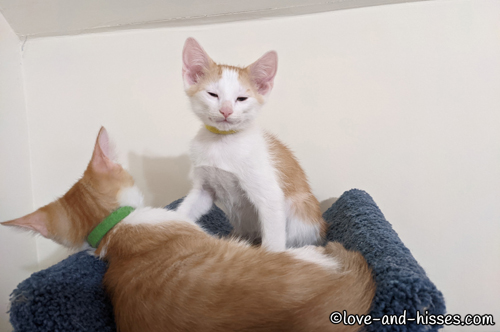 Christopher Chutney’s not very awake, though. 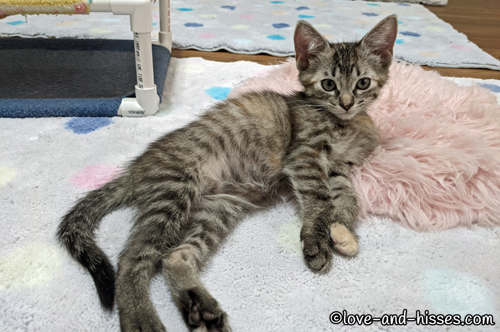 Tia Teriyaki is just so CUTE (and I think she knows that.) 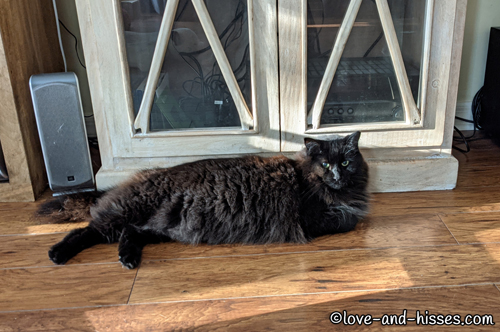 The dust bunnies in this house are getting out of hand lately.

Posted on social media on Friday, Saturday and Sunday. 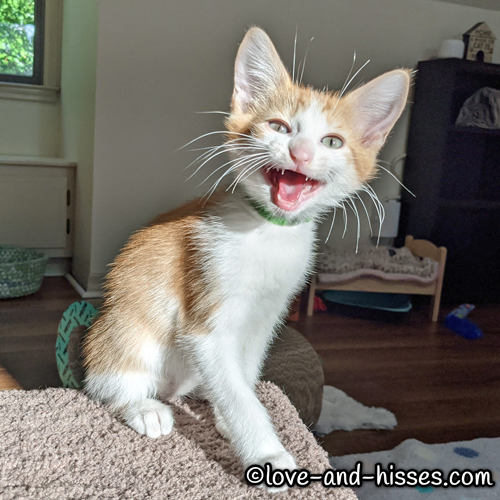 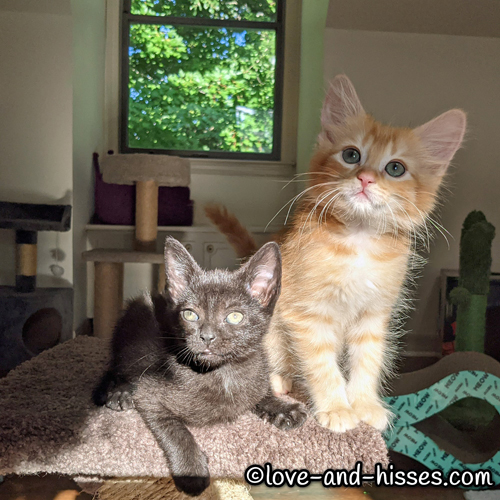 Seriously, Sofia Soy Sauce and Theo Pesto are the best little posers (when they feel like it.)

YouTube link
Mama Molly Marinara ran across the room to chase a ping pong ball and it scared a couple of the kittens so much that they went floof-tailed and moved slowly for a little bit. 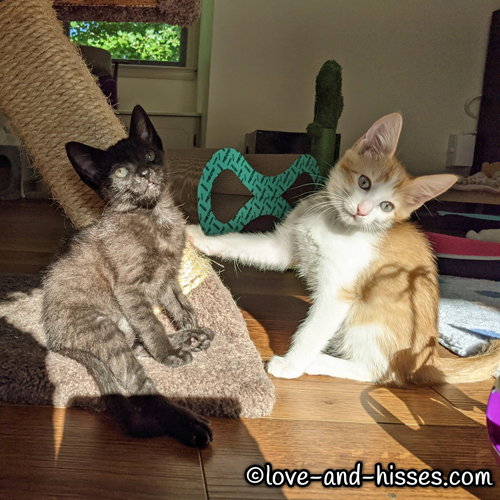 I swear Sofia Soy Sauce and Franco Fondue look like they’re posing for the JC Penney Back to School catalog, they just need some tiny backpacks tossed over their shoulders. I’m gonna fold this page over; maybe Mom will get me this look and I’ll be the coolest cat in 7th grade. ⁠

YouTube link
Kittens watching the storm. The kittens heard the rain hitting the window and had to see what was going on. They’re so freakin’ CUTE when they stand up and look out that window, I just wanted to squoosh them all. 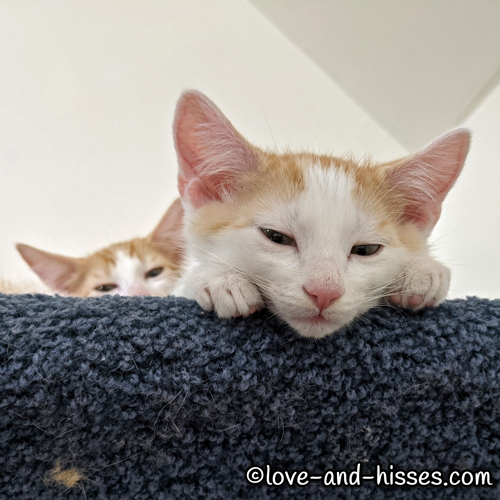 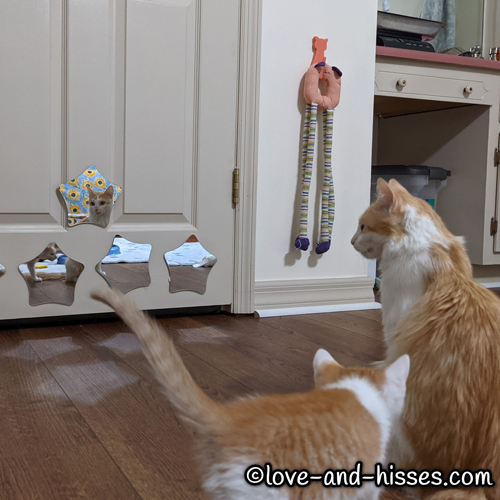 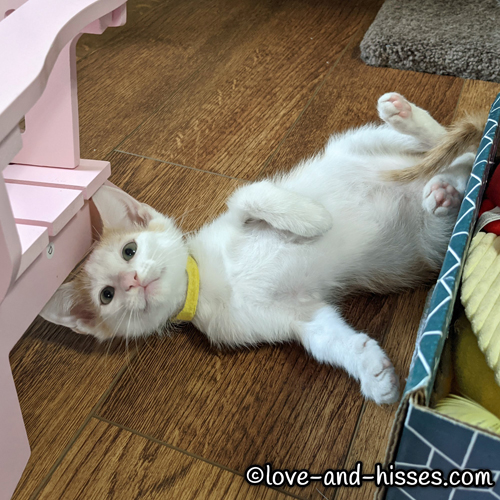 Christopher Chutney likes to let it all hang out. 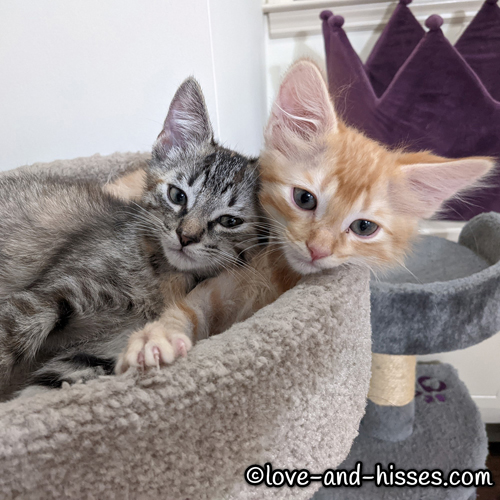 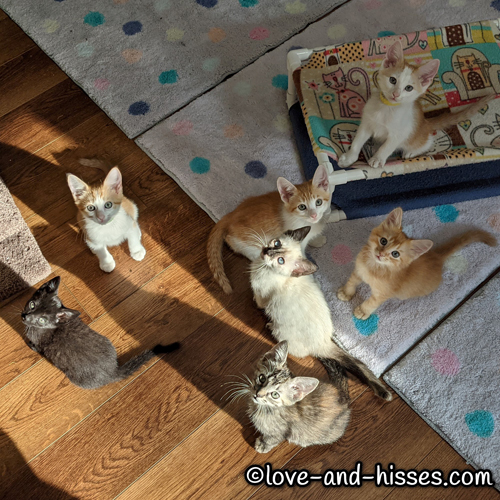 All 7 kittens in one picture (yes, there was a feather teaser up there!) One of these days I’m going to get Molly Marinara in a good picture with them, and then my job will be done.

YouTube link
Milk bar on the move. Mama Molly Marinara isn’t up for milk bar duty at the moment… but of course that doesn’t stop the kittens from following her around and trying to latch on! 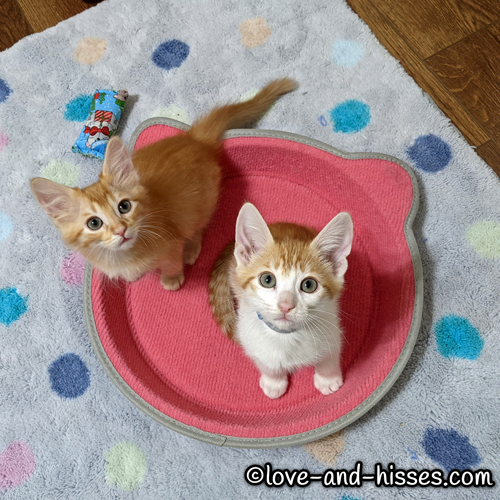 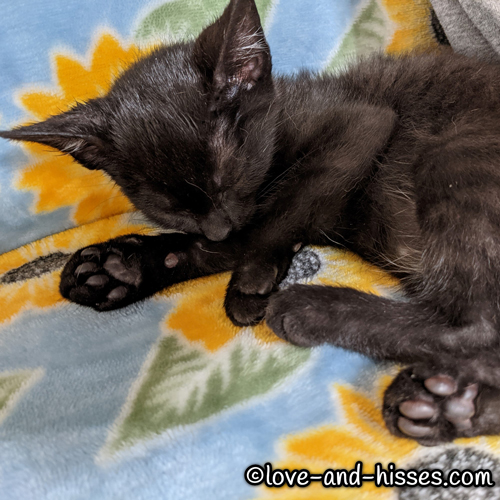