In case you missed it on social media… We found out that she’d already been spayed (and wasn’t microchipped) on Wednesday. On Thursday, a family came to meet her. She was great with them, rubbed up against them immediately, purred, rolled around on her back. She was exactly what they were looking for, and I think they were exactly what SHE was looking for.

I delivered her yesterday, and that girl came out of the carrier and stomped around every inch of that house. She is going to be spoiled rotten! (Yesterday afternoon she was getting all the pettins from her new little boy, and loving it.)

This is the fastest adoption we’ve had – from a “possibly pregnant” stray to “oops, already spayed” and adopted in 9 days. She is one lucky girl.

Here are the rest of the pictures I took of her before she went home. Look at her, perking up the instant I walked through the door. “Oh, is it snuggle time? Well, you weren’t on my calendar, but I suppose I can make time!” She is one gorgeous girl. I had to literally sneak up on her to get a picture of her lying in that bed.

They’re planning to keep her name as Natalia.

And we are taking a break from fostering. Not a long one, but I’ve got a lot of stuff to get done this week and early next week, so at least a week. The permanent residents are already hanging out in the foster room again, of course.

Speaking of our adopted fosters, look at these little faces. 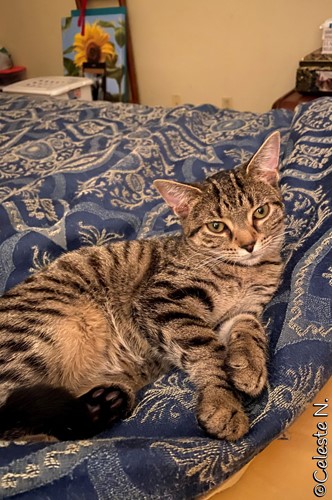 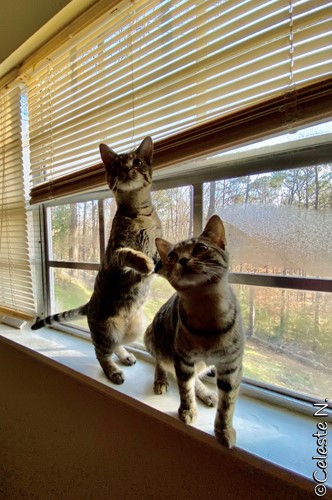 Gabrielle and Josephine: eyes on the prize. 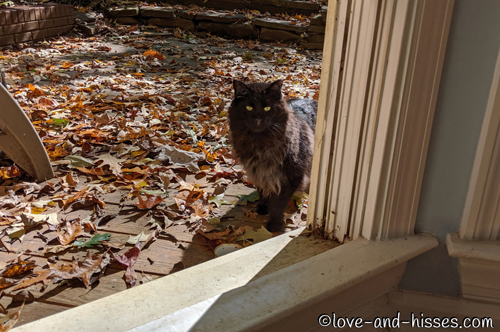 That’s okay Khal. It’s only FREEZING out there, you go ahead and take your time deciding whether you actually want in or not. I’ll just stand here with the window open.