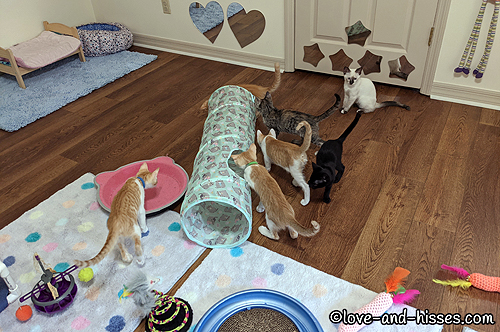 Checking out the tunnel. 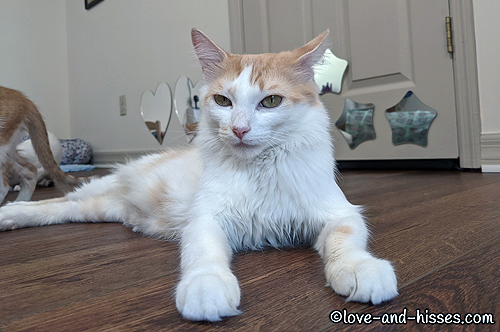 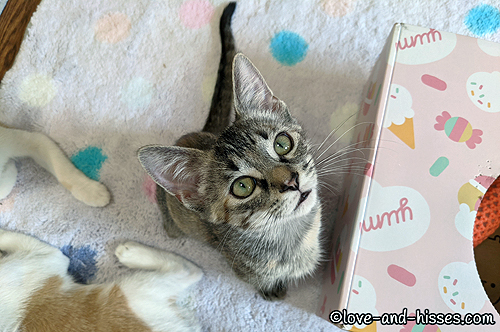 Tia Teriyaki keeps an eye on me. 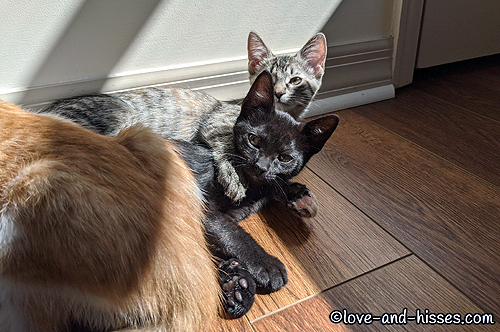 Tia Teriyaki and Sofia Soy Sauce snuggling in the sun. 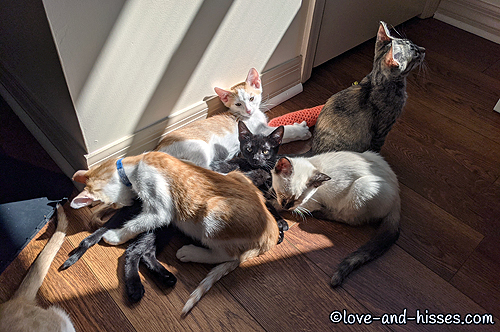 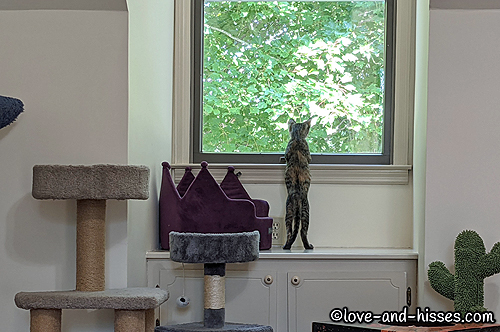 Tia’s keeping an eye out. 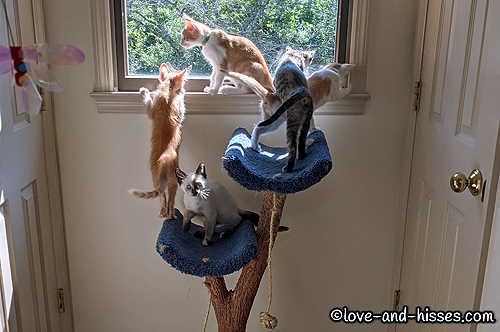 I like to change things around in the kitten room to keep the kittens on their toes, and moving this cat tree to the window that gets the morning sun was a big hit with the kittens. 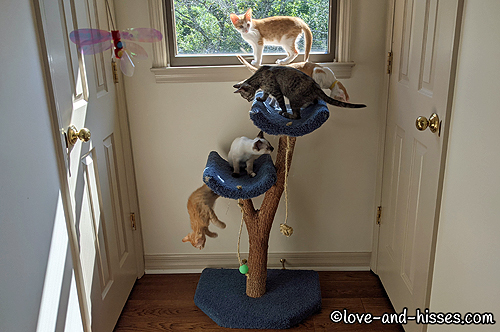 Please note Theo Pesto in the lower left, mid-leap to the floor. 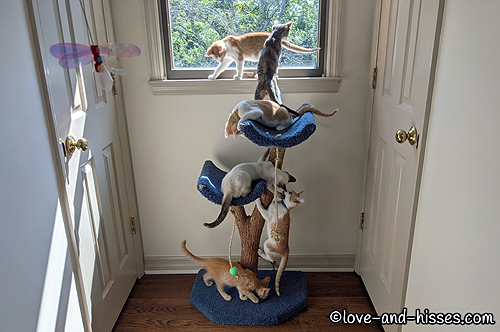 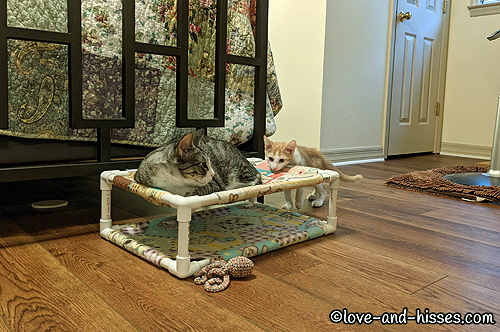 Franco Fondue gets a look at Uncle Charlie. 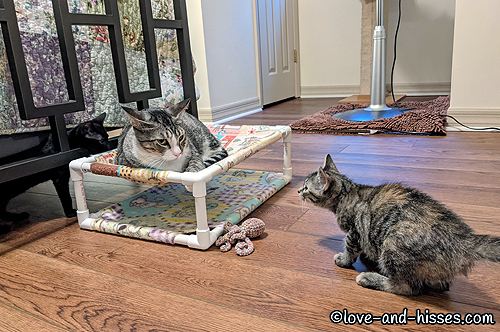 As does Tia Teriyaki (and Sofia Soy Sauce from behind!)

So the girls (Tia Teriyaki, Hannah Hollandaise and Sofia Soy Sauce) came through their spay surgeries just fine. I got them back here by mid-morning Friday, and the boys hissed at the girls, the girls ignored the boys because they were too busy racing around, and Molly Marinara was tired of all of them. By bed time Friday they were all friends again. (I should add that we are still in the midst of having ventilation fans put in the bathrooms, and the workers had to access attic space off the kitten room, so the kittens probably bonded over their fear of strange men coming into the room. The workers were great about being as quiet as they could be when working off the kitten room, and being sure not to let the kittens out, although the kittens mostly hid behind the couch, so didn’t really try to escape the room.)

Tia Teriyaki and Hannah Hollandaise are headed home this morning AND the boys are off for their neuter surgeries. So it’ll be only Molly Marinara and Sofia Soy Sauce in the foster room for the better part of the day. The boys actually don’t have to spend the night (neuters being much less invasive than spays), so they’ll be back here this evening. (Edited to add: I misspoke – the boys will spend the night at the vet and will be back here tomorrow morning!) 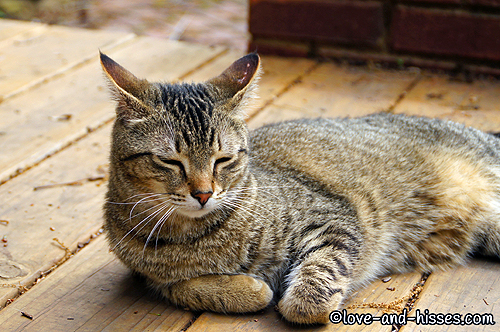 Since Dewey continues to completely avoid having his picture taken, I’m going to share old pictures of him until such a time comes that he forgets his dislike of the camera and lets me take his picture again. This picture was taken in April of 2018 as Dewey and his Ears of Annoyance were snoozing on the deck.

Posted on social media (Facebook/Twitter/Instagram/Tumblr) on Friday, Saturday and Sunday. 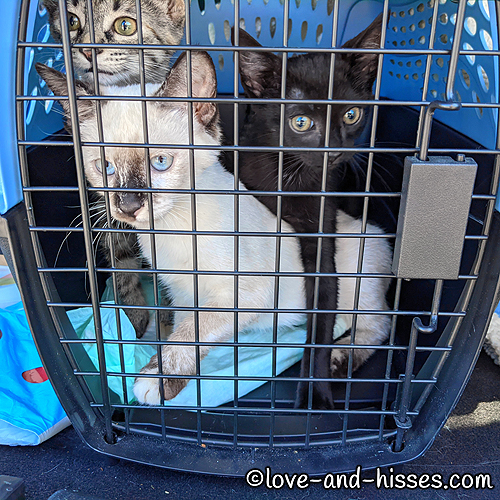 The girls came through their spay surgeries just fine and were MUCH more vocal on the drive home. They’re reunited with the other kittens, and everyone is hissing at everyone else (as I expected). 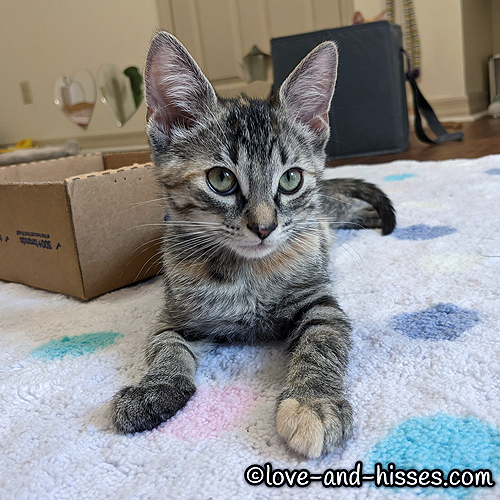 Tia Teriyaki still isn’t quite sure what happened to her at that vet, but she’s glad it’s over!

YouTube link
The Milk Bar is a TRAP. Watch out kittens! 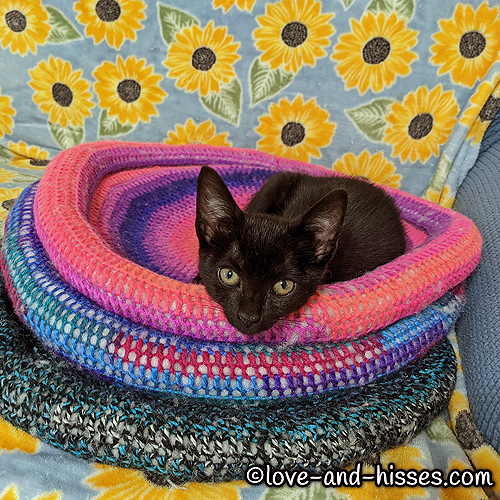 YouTube link
Home again home again. The girls were spayed Thursday and spent the night at the vet. When I got them home yesterday morning, they were very happy and raced around playing – but they smelled strange to the boys, who got hissy with them. And Mama Molly Marinara was tired of the drama and wished everyone would take a nap.

YouTube link
In the foster room, everything becomes a toy. 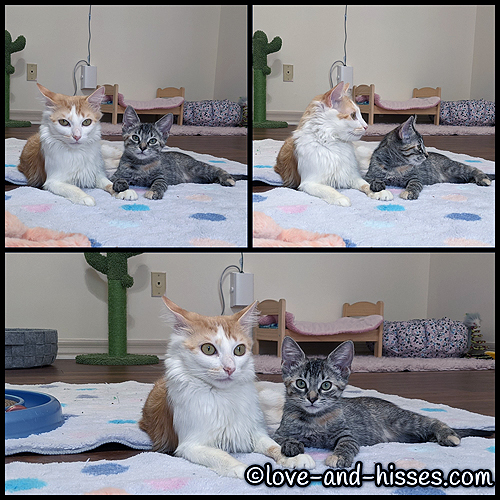 I adore this series of pictures – Mama Molly Marinara and her girl Tia Teriyaki just hanging out, holding paws… then something happens off-camera that they both look at… and then they ponder what they’ve seen!

YouTube link
Tia Teriyaki gets her skitter on. That girl is a NUT. 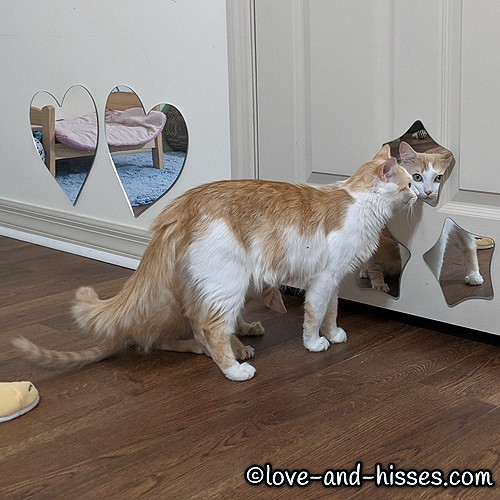 “Watching you, lady. Watching… you….” 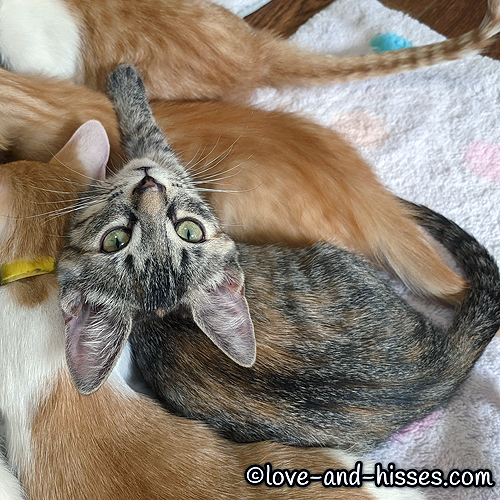 Good night innernets. (Tia Teriyaki, and a pile of orange and white kittens.) 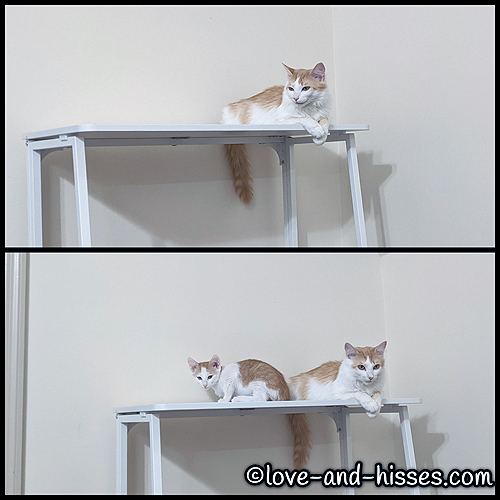 I love the little smile on Molly Marinara’s face in the first picture – and the lack of a smile in the second. Can’t a mama get a few minutes of peace and quiet?! 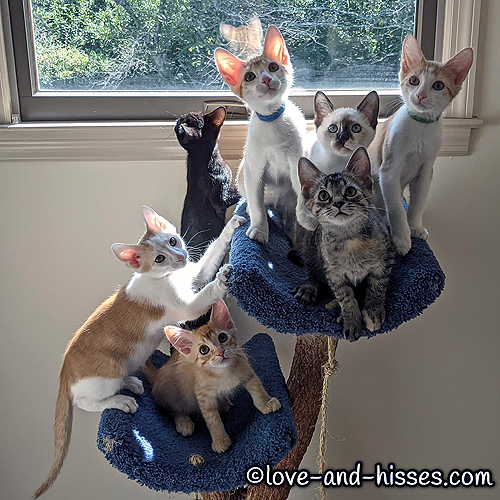 I moved the cat tree so that it was in front of this window, and I think you could say it was a huge hit! 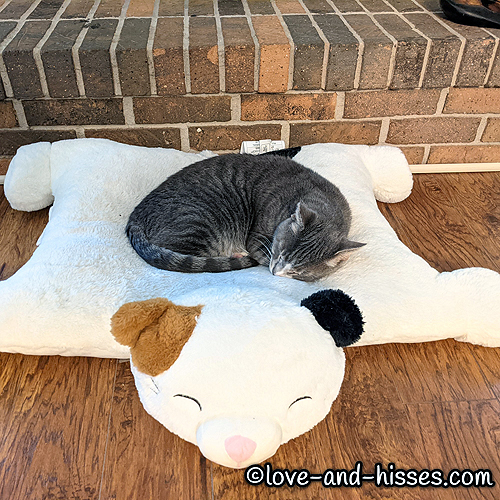