Hey, I haven’t had a chance to go read through all the posts & comments to see if this has been addressed… what’s up w/ Sofia’s tail? It looks broken, sort of bent to the side.

It has a crook in it – I believe it was broken and healed before she came to Forgotten Felines. It doesn’t bother her at all, and she doesn’t notice or mind when I mess with it.

Hello, I’m Charlie, Prince of Wails
I dream of little Cottontails
While snoozin’ in my ham-mick bed all day

Wait, what? How did I miss this?

Are Tia Teriyaki and Hannah Hollandaise going together? Fingers crossed!

Yep, they’re going together – and Theo Pesto and Sofia Soy Sauce are going together as well, later in the month. (I don’t know how you missed it – I mentioned it on the blog at least twice. It’s nearly as though you don’t memorize every magical word I type. ::sniffle:: )

Remind us: are Hanna AND Sofia wonderful Molly’s adoptees? Bonus question: do all cats have white/clear claws? I might have to give dogs some credit, because I have seen adorable matching and/or multi-colored tonails on them, but all the cats I’ve had had the same claws.

They are the add-ins – Sofia Soy Sauce was added in when she was tiny (which is probably why Molly Marinara took her in so easily) and Hannah Hollandaise came to us about a week after I got Molly and her kittens (and Sofia). It’s now been five weeks since we added Hannah Hollandaise and despite the rough start (Molly Marinara went after Hannah; I think she saw her as a strange cat rather than a kitten who needed mothering) I would say that Molly Marinara has no recollection of the fact that Hannah isn’t actually her kitten. She treats her exactly the same as her own kittens, and in fact she might even like her a little bit more because Hannah loves to groom her.

To my knowledge, most cat claws are clear/white, but some of them are more grayish brown (but also clear). I suppose I need to pay attention to their claws more than noting whether they need to be trimmed!

Look at Tia’s wee paw resting on your hand as she goes for gold in the Churu event! Was she the runt of the litter? She always seems tinier than the others.

Theo Pesto and Tia Teriyaki were pretty much the same weight when I first got them, and for the first few weeks Tia was bigger than Theo. Recently he’s started to gain more weight – he may weigh more than she does at this point (I haven’t weighed them in a little while; I plan to today and will update the weight chart on their page.) Edited to add: I updated the weight chart on their page. As of this morning, Tia still weighs 5 ounces more than Theo. I think his floof makes him look bigger than he actually is.

Pretty confident Earl the Squirrel was left behind but do you have an Earl 2.0?

Not yet – but I need to figure out where to put the window bird feeder in order to lure him in! We have squirrels on the bird feeders in the back yard, but none of them have really distinguished themselves yet as being worthy of the name. Step it up, squirrels!

That photo of all the kittens on the scratcher, who is the one “mooning” everyone? LOL 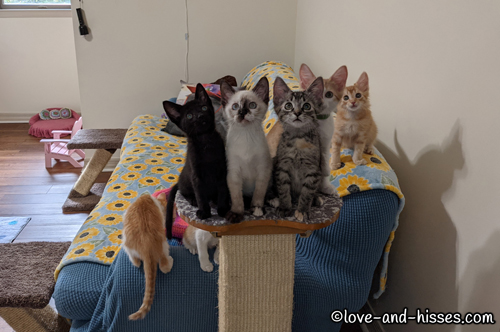 That’s quite the little screened in porch area they have there! Nice… Is that glass, or screened-in? 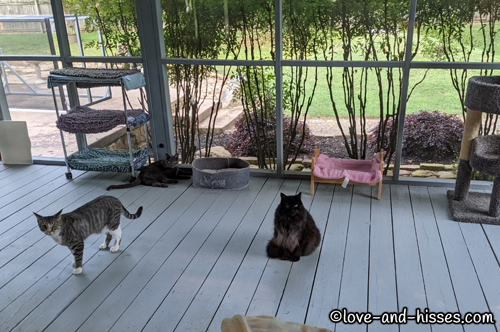 It’s screened in – and the cats love it! I might prefer to have it glassed in (it gets awfully wet on that porch when it’s raining and windy), but I’m not sure the cats would like it as much – and I can’t get Fred on board with the idea of a glassed-in porch, so I guess that point is moot. 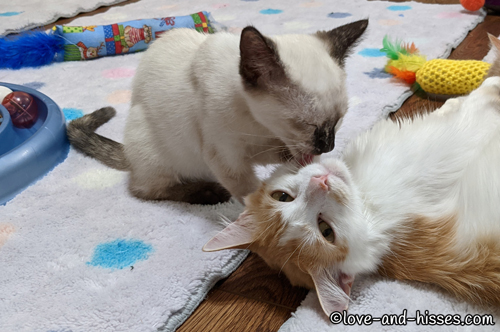 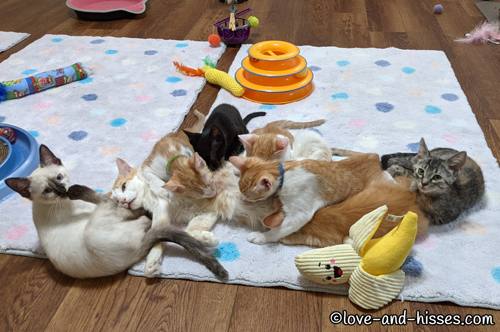 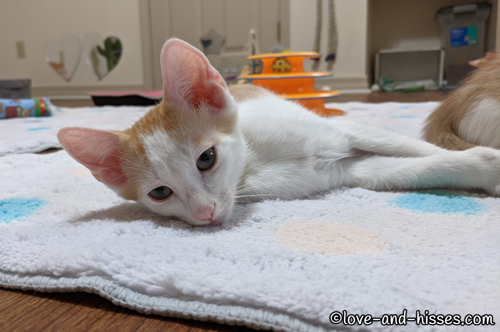 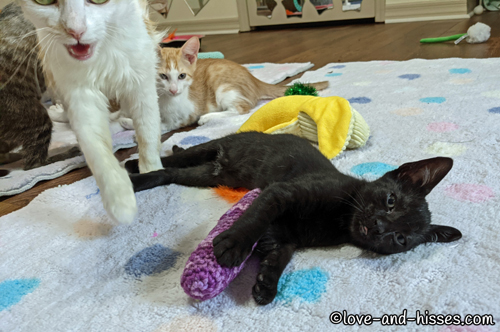 So is Sofia Soy Sauce. And Molly Marinara is all “Hey! You! I believe it’s treat time!”

Hangin’ with the babies. Theo Pesto and Tia Teriyaki in the pile o’ beds at the end, Molly Marinara on the little scratcher to the right, Hannah Hollandaise in the ham-mick on the floor, Christopher Chutney flopped against me, and Alfie Alfredo and Franco Fondue fighting in my lap. (Sofia Soy Sauce was using the litter box, I think.) 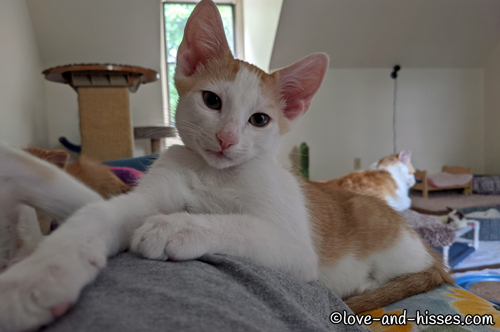 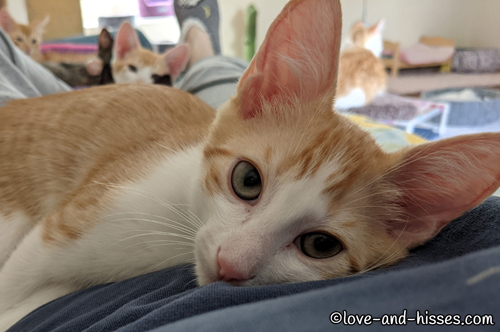 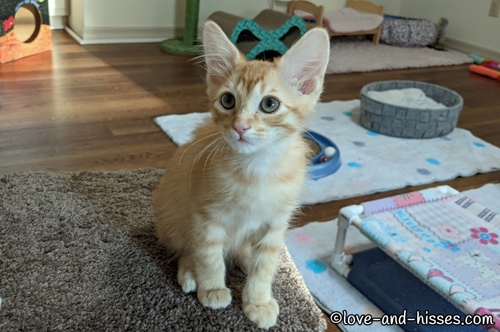 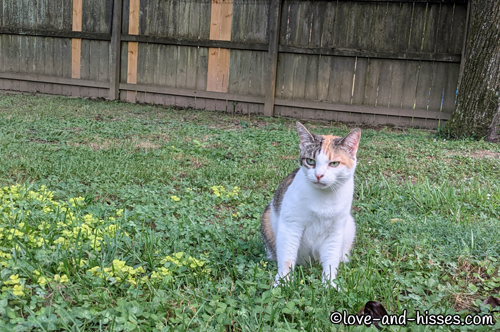 Alice Mo would like us to know that we have a mole problem in the back yard (we know.) 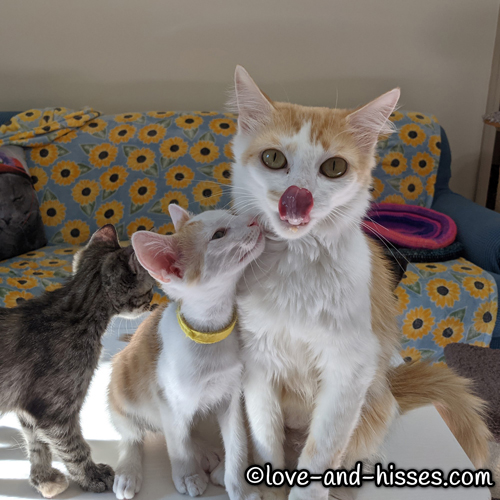 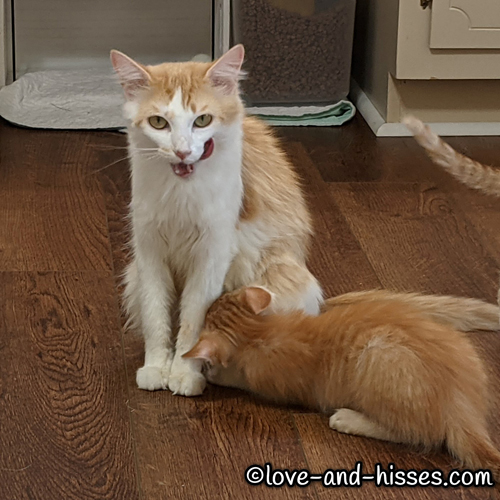 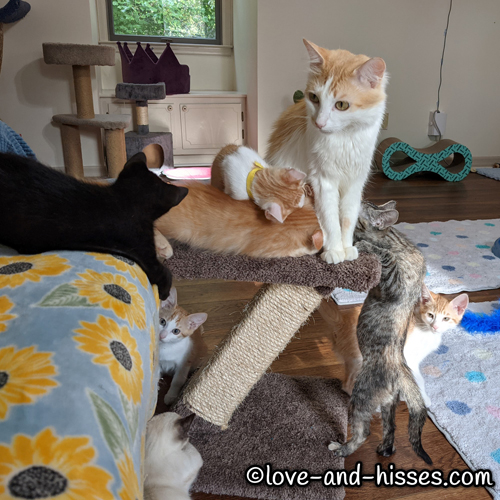 I love Tia Teriyaki trying to sneak in from the side (she didn’t have much luck.) 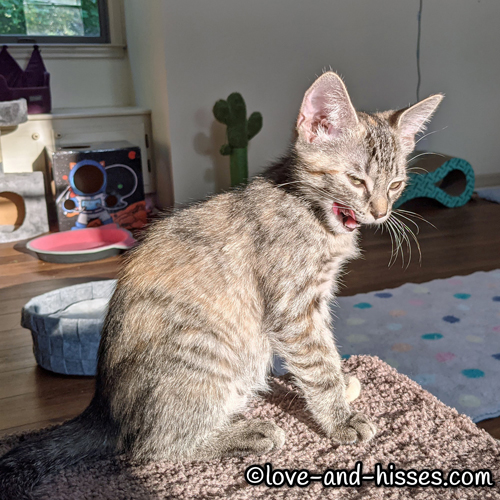 YouTube link
Question answered: the moving bed. Every time I walk into the foster room, it seems that the big puffy bed has been moved all the way across the room from where I like it to be. I move it before I leave the room, I come back and boom: there it is, across the room. I wondered how they moved it – it’s light, but it’s a big bed – so I set up the Nest camera to find out. Along the way, I got some cute playing time… and ultimately, an answer to my question. 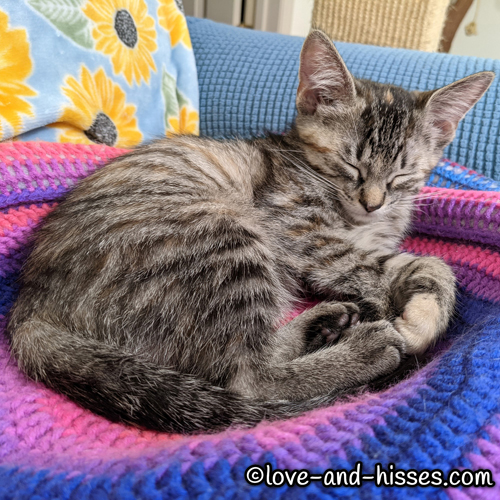