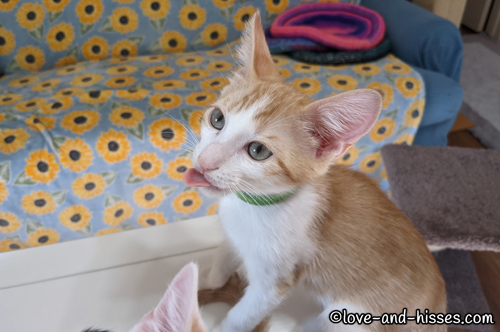 Franco Fondue shows off his tongue. 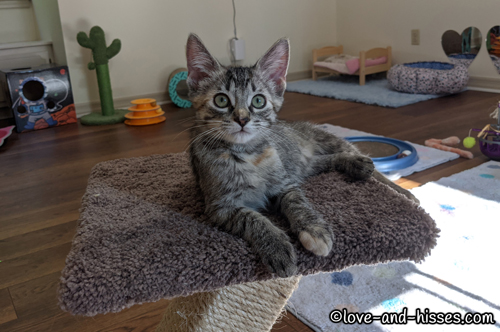 Tia Teriyaki is such a little poser (and yes, that is a blop of Churu on her nose.) 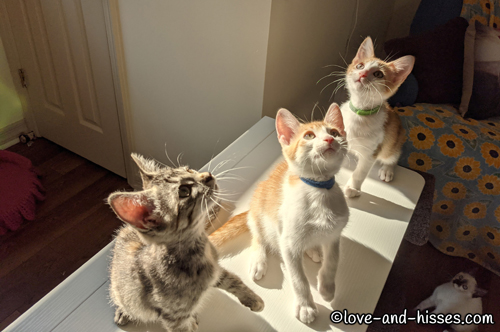 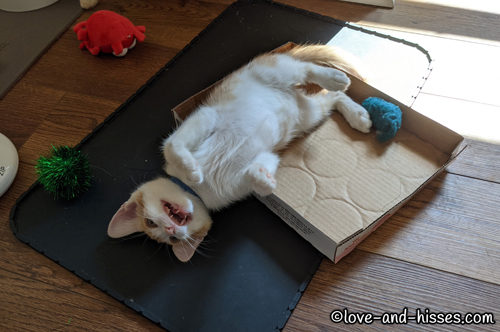 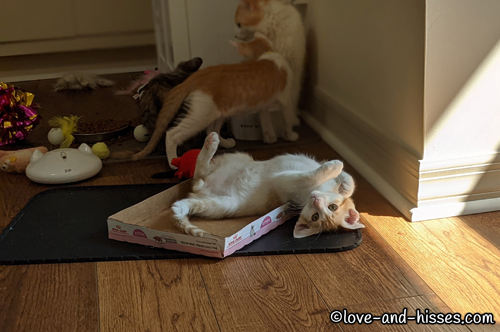 Apropos of nothing, I am reminded that I have not told y’all that the girl kittens (Hannah Hollandaise, Tia Teriyaki and Sofia Soy Sauce) are off to be spayed next week and the boys (Alfie Alfredo, Christopher Chutney, Franco Fondue and Theo Pesto) will be neutered early the following week (the same day Tia Teriyaki and Hannah Hollandaise are going home, actually!) Mama Molly Marinara has, of course, already been spayed. 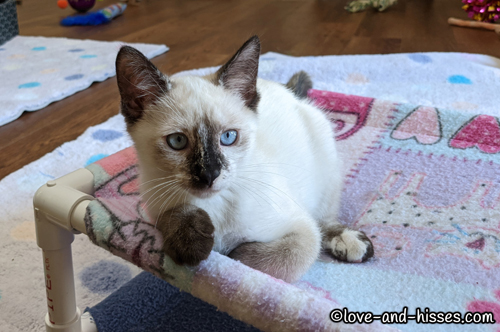 “Not sure I care for the sound of that, lady.” 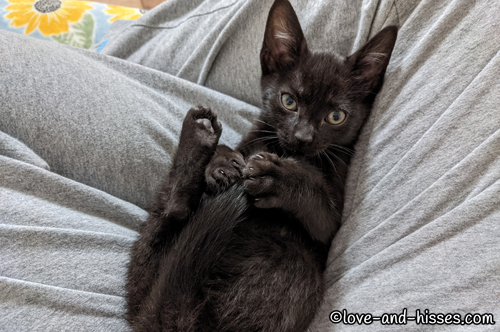 Sofia Soy Sauce is such a lapkitten. Every morning after breakfast she comes and climbs in my lap and then I squoosh her. 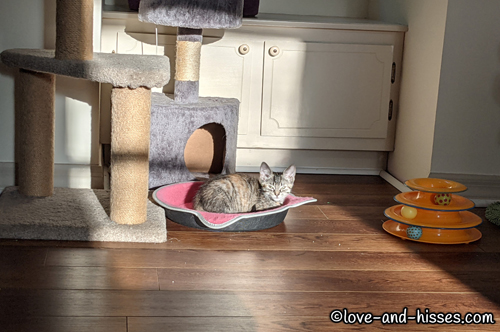 I keep my Tia Teriyaki pie warm by placing it in the sunshine. 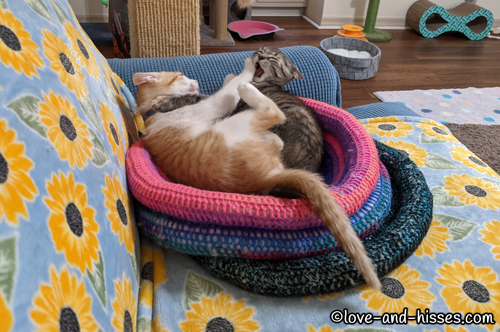 Alfie Alfredo and Tia Teriyaki have a tussle. 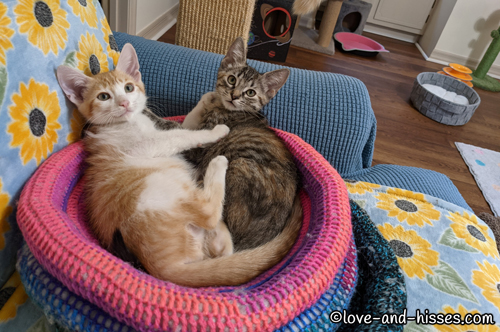 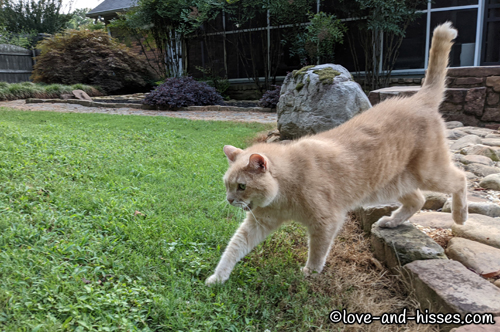 Regarding the permanent residents: Teresa and Karen were here on Monday to pack the boxes of stuff people had won in the auction (did I mention there was an auction?) and the only cat who came looking for attention was Archie. Newt did allow them to pet him for a brief period of time before fleeing, but the only other permanent residents they saw were Charlie (who was hiding in the bathroom and went racing by when we went upstairs to see the kittens) and I think Teresa caught a glimpse of Alice. All the others were hiding, as usual.

A few people were surprised after I mentioned that Archie let the workers pet him last week. The truth is that Archie is perfectly fine with people and will often approach strangers for petting. As long as you don’t try to restrain him in any way (and as long as you’re not a strange cat), he’s got no issues with you.

And regarding Teresa and Karen seeing the kittens and Molly: we walked into the room, and Molly Marinara came right over to be petted (she’s got no stranger danger concerns). The kittens gathered around Molly, a couple came over to be petted by me, and just as the thought “Oh, this is going well” entered my brain, the kittens VERY SUDDENLY realized there were strangers in the room and they VAMOOSED (except for Sofia Soy Sauce, who did not care one tiny bit.) Teresa did get a chance to pick up Tia Teriyaki, and I think Karen got to barely touch a kitten or two. But most of them hid behind the couch and stared suspiciously out at Karen.

I suppose I can’t really blame them – they’ve only seen the two of us for the past 6 weeks, so strangers are new and scary. If we’d had more time, I suspect they’d have started to come out and investigate – they were SUSPICIOUS but also CURIOUS – but we had boxes to pack, so only spent about 15 minutes in there. 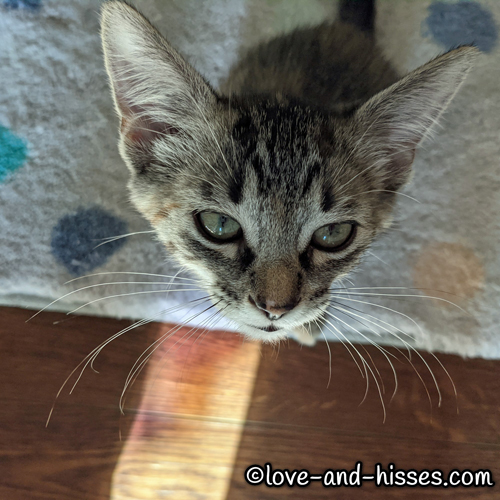 Thanks to everyone for your concern – at this point we are only seeing lots of rain from Hurricane Ida (which has been downgraded to a Tropical Depression now) and I expect that’s all we’ll see. (We’re located in the Huntsville, Alabama area, about half an hour from the Tennessee border.) 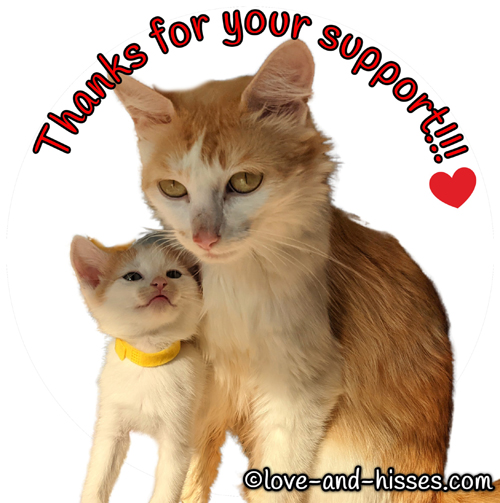 Thank you so much to everyone who took part in the online auction for Forgotten Felines of Huntsville (it ended Saturday) – it got super nuts in the last five minutes – the winning bids totaled $5178. Thanks to Teresa and Karen (who can pack a box like nobody’s business) all the stuff we’re shipping will be in the mail tomorrow. Local winners will be getting their winnings in the next few days – and then it’s time to prepare for the November auction, which will be BIG. (Extra super special thanks to Teresa, who captains every single of one these auctions and without whom they would never happen!)

YouTube link
Hannah Hollandaise has done this waving-paws-in-the-air move many times, but this is the first time I’ve caught it on video. It’s absolutely adorable and makes me want to squoosh her. 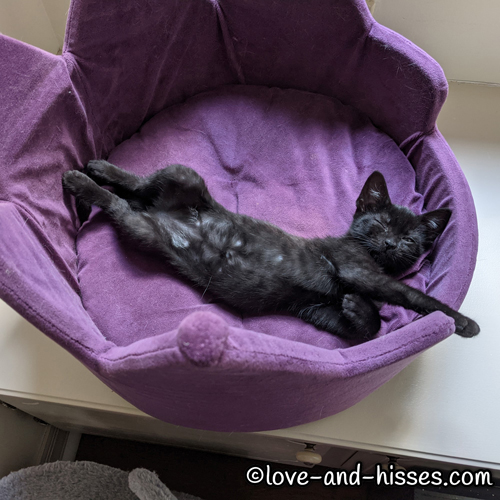