Someone asked in yesterday’s comments if Sam can close his eyes. He certainly can – in fact, we had a bit of a scare on Sunday when we walked in to give him his medicine, and his eyes were mostly glued shut by, I guess, post-surgery gunk (I noticed that his eyes were tearing a little on Saturday). We put some drops on the outside of his eyes, and soon enough he was able to open his eyes and he hasn’t had the problem since, thank goodness.

He’s not one of the kittens who couldn’t close his eyes completely before surgery. Terry and Bill are the ones with so much of an upper eyelid missing that when they close their eyes, you can still see their eyes. Sam’s eyelids weren’t nearly as bad as that, though with the pieces of eyelid missing, he had fur rubbing directly on his eyes every time he blinked. Now, his eyes are protected from that abrasion.

I’ll try to get some more pictures of him later today so you can see how well he’s doing. From a distance, I’ll say that he looks like he has completely normal eyes, it’s not until you get up close that you realize something’s different.

He had the last of his pain medication yesterday morning, and today he’s perfectly fine. When I went to let them out of their room, he came running right over with his tail sticking straight up in the air, let me squirt medicine down his throat, put ointment in his eyes, and then ran off to play.

Now, however, we’re going to talk about another of the True Blood 6, someone who doesn’t get his picture posted nearly often enough.

I speak, of course, of Lafayette.

Lafayette, being a black cat, is kind of difficult to photograph because he tends to show up as a dark mass in pictures. I can take his picture with the flash on, but his fur is so shiny that it reflects the light and looks terrible. Yesterday, as I was visiting the kittens (I visit them many times a day, as you can imagine), he flopped down in the sunlight, and I managed to get a few good shots of him. 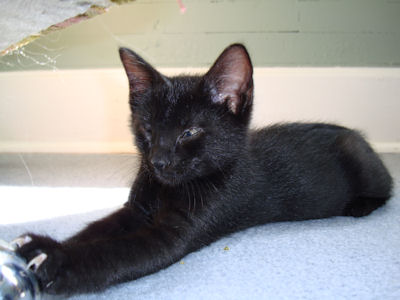 “O crystal ball, when will I get my fancy new eyelips?” Soon enough, sweet boy, I promise. 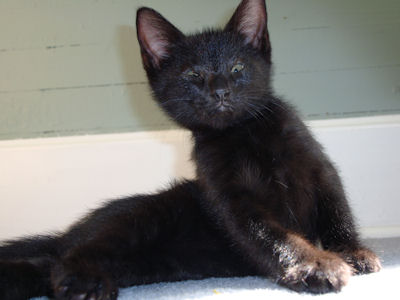 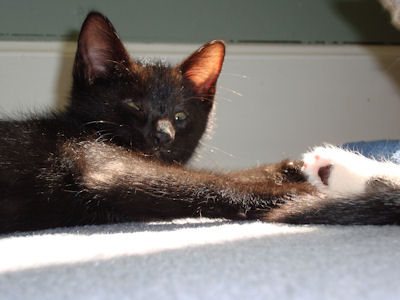 Casually considering whether to chomp on Sookie’s foot. 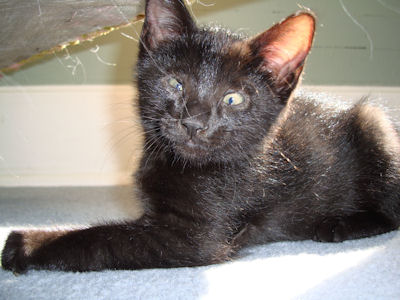 Happy boy in the sun.

He is not only a good-looking boy, he’s super-sweet. He’ll come over and press up against my leg and wait for me to notice him, and then when I speak to him, he purrs and purrs. He likes to be held on his back like a baby, and when I give him a belly rub, he starts off cleaning his own paws, and finishes up by cleaning my fingers.

He’s all about the cleanliness, sweet boy.