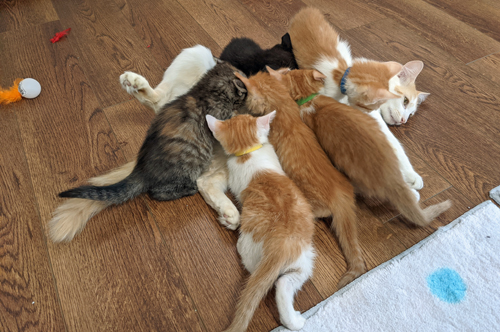 Molly Marinara was found as a stray, wandering through a neighborhood hugely pregnant and looking for a safe place to give birth to her kittens. She went to Michelle’s house, and on June 4th gave birth to 5 kittens – Alfie Alfredo, Christopher Chutney, Franco Fondue, Theo Pesto, and Tia Teriyaki. A few weeks later a tiny black kitten – Sofia Soy Sauce – was discovered alone on a loading dock in a rural town and came to join Molly and her kittens. Molly cared for her immediately and at this point she’s pretty sure Sofia was hers all along. On July 21st, Molly and her kittens came to me. 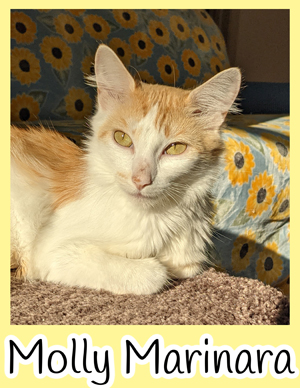 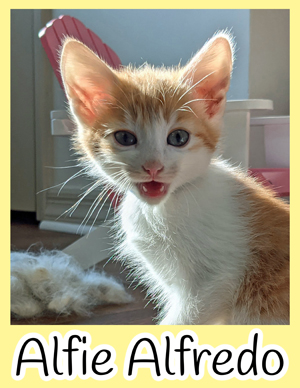 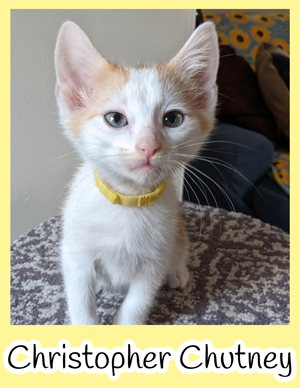 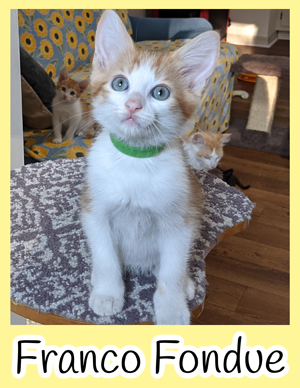 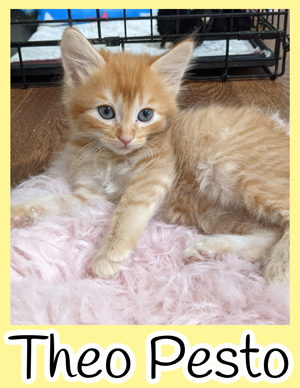 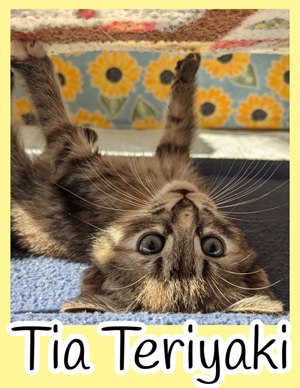 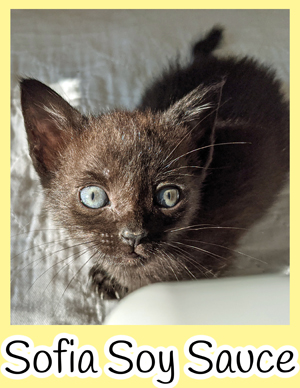 A week after Molly and her kittens came to me, a little siamese mix – Hannah Hollandaise – was trapped as part of a colony. She was too small to be spayed with the rest of her litter, so we decided to see if Molly Marinara would want to mother her. Molly did NOT want to mother her at ALL, but after a week and a half Molly decided she could tolerate her, so now Hannah plays with the other kittens and tries to befriend Molly. (I suspect Molly will eventually cave; she’s too sweet not to.) 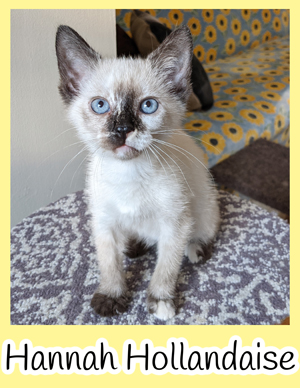 You can read about Molly Marinara and the Dippers beginning here. There are links at the top and bottom of each entry; click on the one on the right to take you to the next entry.

You can see all the pictures taken of the Dippers here at Flickr, or scroll through them below.

Tia Teriyaki and Hannah Hollandaise were adopted together on September 13, 2021 – they’re now residents of Myrtle Beach, South Carolina and you can see them on Facebook here!

Sofia Soy Sauce and Theo Pesto were adopted together on October 20, 2021 – they’re now residents of Sacramento, California and you can see them on Facebook here!

Franco Fondue was adopted on October 25, 2021. He joins a family that includes kitty sister Miso, and he will now be known as “Fondue.”

Molly Marinara was adopted on November 13, 2021. She joins a family with two adult cats and a Pomeranian who thinks he’s a cat. (She is going to remain Molly Marinara.)

Alfie Alfredo and Christopher Chutney were adopted – together! – on December 11, 2021. They join a family with two kitties and three dogs, and now live in Mobile, Alabama. You can follow them on Facebook here!

Franco Fondue was returned at the end of February – he was too rambunctious for the other kitty in his home and it was making her sick, so the adopters decided it was best for everyone to return him. A week later, he was adopted by the same family who had adopted Alfie Alfredo and Christopher Chutney! He went home on March 2nd, and you can see him with his brothers on Facebook. 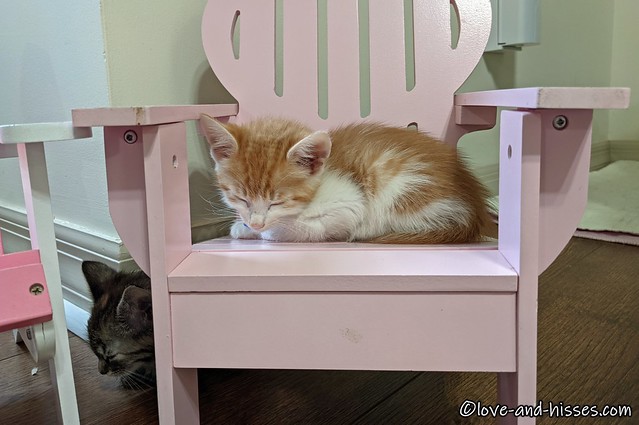