Yesterday after I dropped Melodie, Martin, and Dodger off at the vet for their operation, I headed into Huntsville to stop by Sam’s Club.

Now, if you’re unfamiliar with Huntsville or where I live, you might not know that to get from Sam’s Club to home, I had to go RIGHT by Petsmart. I stopped, of course, because I am only so strong. I just wanted to peek at Bolitar and Rhyme and make sure they were okay. So I got to a point at the end of an aisle where I could peek into their cage and they couldn’t see me. I peered around the corner, and Bolitar was sitting next to the litter box, and the instant I peered around the corner, his head SNAPPED around, and he saw me immediately.

I couldn’t help myself, I went over to the cage and started talking to him. I couldn’t figure out where Rhyme was, so I looked and looked, and finally realized that he was in the litter box, sound asleep. I spoke to him and got his attention, and just hearing my voice, he came out of the litter box and stretched and pawed at the glass.

Well. What would YOU do? I couldn’t just leave!

No, I didn’t snatch him up and bring him home – but I did go find a manager to let me into the cat room, and I let them out of their cage, and I sat there on the floor and cuddled and kissed and played with them for 45 minutes. They were SO happy to see me. They climbed into my lap, they purred, they hugged me. They showed me their toys, they ran back and forth, stretching their legs, and they climbed into my lap for more love.

After 45 minutes, they were ready to go back into their cage for some food and a nap, so I gave them each one last kiss and cuddle, and left.

I was so relaxed that I felt like I’d had a massage.

I’m keeping my fingers crossed that someone falls in love with them tonight or tomorrow during adoption hours. But if they don’t, I know I can always go back to Petsmart and spend more time with them.

I forgot to mention this – Amy asked how it was that Bolitar and Rhyme were the first to depart. Basically, we were having an issue with Bolitar picking on the babies upstairs and also with him getting out into the back yard and then OUT of the back yard a couple of times, so even though (I know this will shock you) he was my favorite, I decided that he should probably be the first to go. And since he and Rhyme are best buddies, I let Rhyme go with him.

An interesting side note is that when I was at Petsmart with Bolitar and Rhyme, Bolitar went over to a cage of smaller kittens and sniffed at them… and then he did NOT hiss or growl or smack at them. Very interesting. So maybe when he was picking on the babies upstairs, he thought he was defending his territory or trying to establish dominance, and in a new setting like at Petsmart, he didn’t feel like he needed to do that? Then again, maybe it’ll just take a few days for him to be comfortable enough to let his inner drama queen out.

Dodger, Melodie, and Martin are now spayed and neutered. All the way to the vet’s office, I expected them to start howling, but after I got them into the carrier, they did not make a single peep all the way there, and when I picked them up last night, they didn’t make a peep all the way home, either. None of them seem to know they’ve had anything done at all – the instant I let them out of the carrier last night, they ran around like their tails were on fire, and they played hard all evening long. I was worried that Melodie would revert to her scaredy-cat ways, and she was a wee bit nervous this morning, but she came over to me pretty quickly to be petted.

So they’re ready to go to the adoption center when room is available, but I’m guessing that it’s going to be a while before that happens!

(Someone asked a couple of days ago whether Martin’s meow has changed since he was little. He still has a pretty distinctive meow, but I intend to get another movie of what he sounds like now, so y’all can judge for yourselves! It’ll take me a few days to get that done, though.) 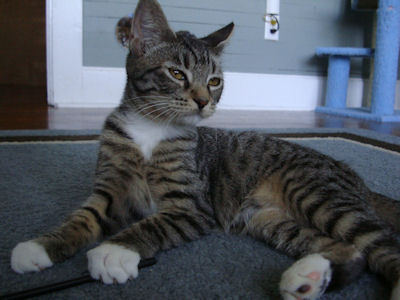 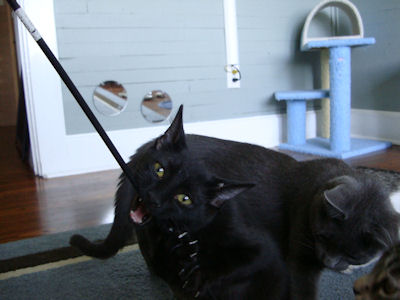 Dodger shows his teeth and claws. 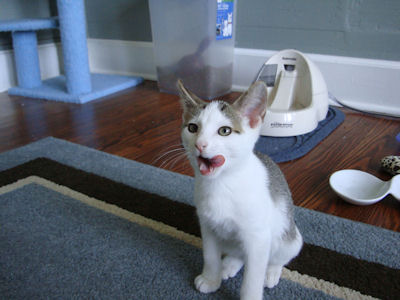 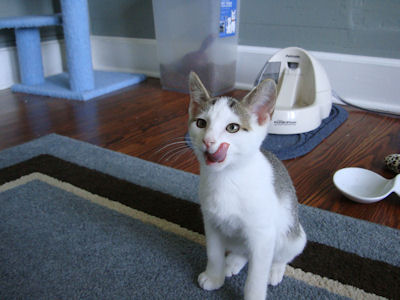 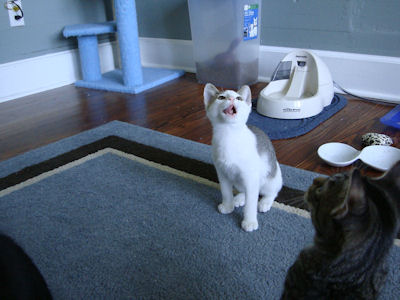 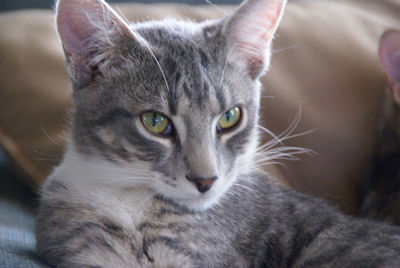 Reacher has turned out to be a middle-of-the-night foot attacker. But that’s okay – he also respects the can of compressed air. 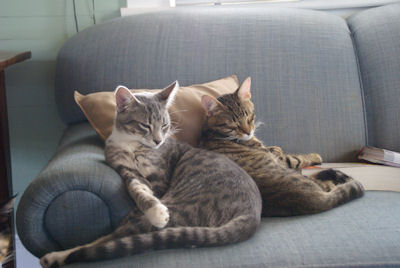 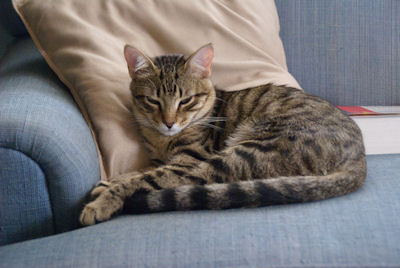 I just cannot stand how GORGEOUS these boys are! 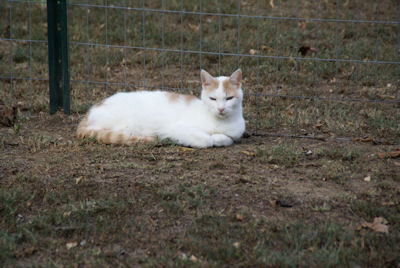 Spanky would like you to know that he’s no dummy. Since he doesn’t wear a collar (he’s never ever climbed over the fence, so we consider it safe to leave him collarless), he can get right up against the fence and the collared cats can’t get to where he is (or they’ll get zapped from their collars), and so they can’t bug him. HA HA HA ON THEM!