On this particular day, the chickens were closed up in their chicken yard, but Frick and Flappy (our two Americauna hens) have been flying over the fence into the back yard, where they spend all day pecking around at bugs and such while their sisters stare sadly through the fence at them. Fred has, in my opinion, let the chickens hang out in the back yard far too often. First he would do it on particularly hot days, because there’s more shade in the back yard, and the chickens like to hang out near the air conditioning unit and if it’s hot enough, they’ll stand in the little pool of condensation that runs out of the runoff pipe (?) and cool off. Now, I don’t mind chickens in the back yard all that much – they’re not aggressive, though they are a little obnoxious in that they run over and make demanding piggy noises at me when I walk into the back yard, because they’ve become accustomed to the idea that whenever a human walks into the back yard, that means it’s snack! time! (In the evening when it’s snack time for the kitties, I’ve been known to holler “Whooooooo’s ready for the snackin’?!” so that whoever’s out in the back yard will come in. Nowadays, whoever’s in the back yard has to go through a crowd of chickens, who think I’m talking to them, and gather around and on the back steps.) However, the bigger the chickens get, the bigger their poop gets, and I am mighty sick of not being able to sit at the table on the concrete pad because the table AND chairs are covered in chicken poop. That is some seriously unfair, if you ask me.

Anyway. Where was I? Oh right, the filling of the bird feeders. So I was filling the bird feeders and Frick was clucking at me through the fence, all “Give me some of that bird seed, woman!”, and I glanced up to see that Flappy had not only flown over the fence into the back yard, she’d also flown over the fence separating the back yard from the rest of the property, and she was wandering along the fence, a little cartoon question mark over her head, trying to figure out how to get back in.

I stomped in an annoyed manner across the back yard to the gate at the back of the fence, close to where she was hanging out. I went through the gate, and tried to shoo her into the back yard. She ran from me, but instead of running through the gate, she ran past the gate toward the garden. I ran after her, waving my arms to herd her, and we soon ended up at the gate at the side of the yard. I pulled the gate open and waved my arms at her, and instead of running through the gate, she ran back toward the garden. Holding the gate, I waved one arm at her, hoping she’d get the idea and run into the back yard. Instead, Mister Boogers ran over to investigate, saw the open gate, decided the shock would be worth it, and ran out of the back yard toward yard next door.

“You,” I said to Flappy through clenched teeth, “Are the stupidest animal in the entire world. GET IN THERE!” I got behind her and herded her into the back yard, closed the gate, and went after Mister Boogers. Who had decided that under the shed next door was the perfect place to hang out, so I had to sweet-talk him into coming out, and when he decided he did, in fact, want to be friends, I grabbed him up, said “I hate you, you [bleep]ing [bleep]hole”, gave him a kiss on top of his pointy little head, and carried him into the back yard. Then I realized that I’d left the back gate open, and Sugarbutt (who was collarless) had wandered through and was sniffing around, so I had to chase him down (not difficult, because he didn’t realize he’d gone into forbidden territory and when I approached him, he was all “Hi, Mom!”) and carry him back into the back yard.

Later, when I relayed the experience to Fred, he said “You realize that during your entire story, the Benny Hill music was playing in the back of my head, right?”

As far as the foster kittens go, the three brown tabbies went to the pet store on Tuesday (they do adoptions Tuesday night) and so since I was in the area yesterday, I stopped to see how many had been adopted, and was disappointed to see all three of them there. I guess there weren’t a lot of adoptions Tuesday night, though, so hopefully they’ll get adopted over the weekend.

The other three stayed behind because Billy Bumbler and Susannah are having eye issues. I tried Terramycin for two days with no results and then Erythromycin for two days with no results, so now I’ve got them on a triple antibiotic ointment that seemed to make them better, but now I don’t know, they don’t seem to be making any progress over the past day or so. Not to mention that all three of them spontaneously developed diarrhea, so I put them on Albon for that.

They were originally supposed to go to the pet store on Friday, but I don’t see that happening unless their eyes completely heal and they stop with the diarrhea overnight.

Poor monkeys. These three are the biggest babies I’ve ever seen. I go in and sit down on the floor, and they surround me and just give me the saddest little baby meows. Even if I’m holding and petting them, they still give me the sad-baby meow. I don’t know exactly what message they’re trying to send, but if they don’t watch out, I’m going to end up squeezing them to death. That, or bite through my tongue, because I bite my tongue constantly when I’m with them so I don’t squeeze them to bits. 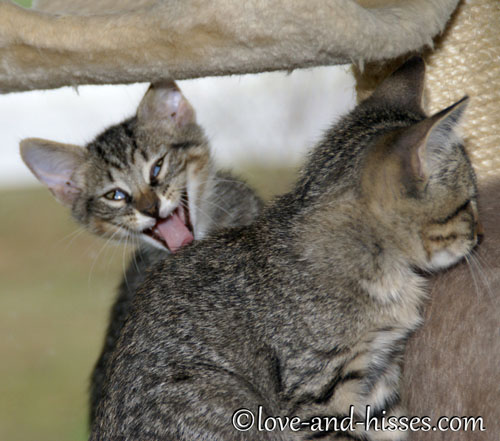 Oh, the face cracks me UP. 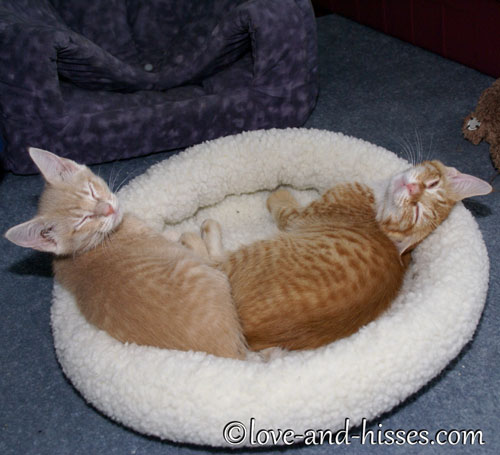 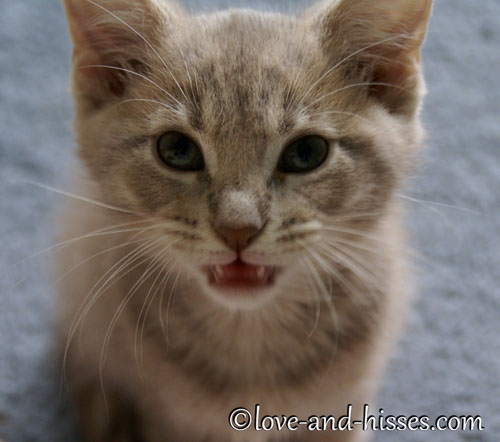 Speaking of cats, when I went to the pet store Tuesday to drop off Eddie Dean, Roland, and Jake, the shelter manager asked if I’d get a couple of pictures of one of the other cats while I was there. I did, and I think they came out really well. 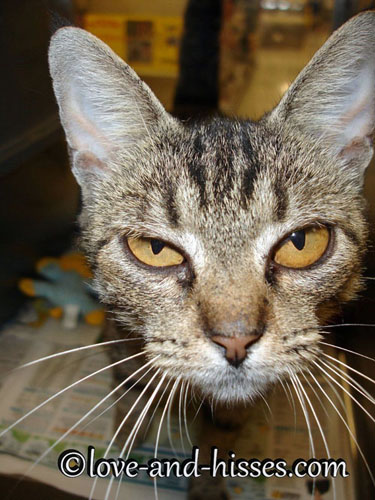 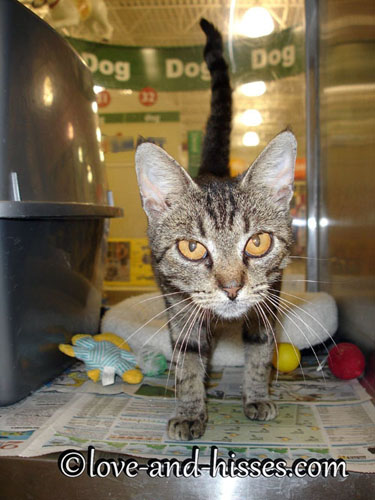 Her name is Copper Girl, and she’s a sweetheart. 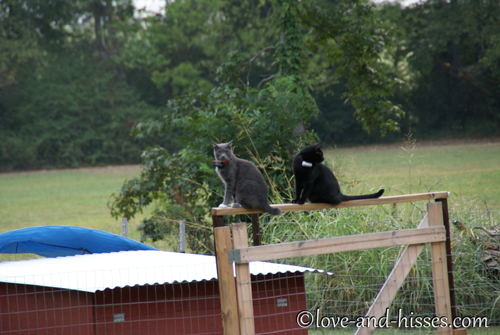 Tom and Boogs, hanging out atop the gate to the chicken yard. 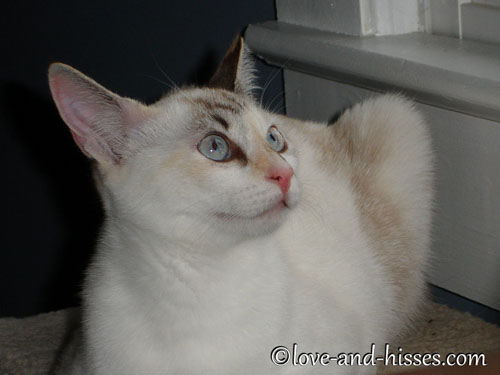