Friday evening Fred and I were sitting in the living room watching TV, when the phone rang. It was the manager of the no-kill shelter I volunteer for (you know, the shelter that provides me with an unending stream of kittens. Suckers!). She asked if I wouldn’t mind going to the pet store to pick up Jake, Roland, and Eddie Dean the next morning. They’d developed, as she put it, “yellow poop.” Y’all KNOW I wasn’t going to turn down the chance to bring them home for a few days, so Saturday morning I went and got them.

They might be poopin’ yellow (you weren’t eating, were you?), but they’re just as active as they ever were. They all three come over and look for love (they really like being held like babies and have their bellies rubbed), but they also spend plenty of time racing around like howler monkeys.

When I walked into the foster room and put the carrier down and opened it, Susannah looked at me and said “NO! What is THIS?!”, and Billy Bumbler and Callahan said “Woohoo! Playmates!” and jumped on them.

After a couple of days of medication, they’re doing better. I don’t know if there’s going to be room at the pet store tomorrow or not but if there is, I think I’ll take the three orange tabbies to the store and let the brown ones stay here ’til the end of the week so I can make sure they’re completely over the diarrhea. 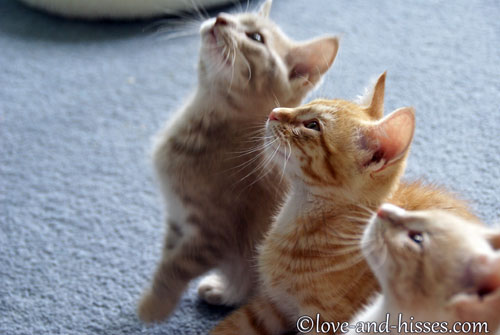 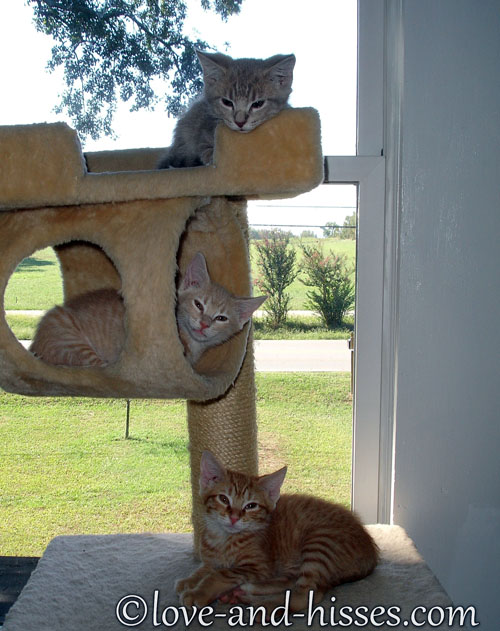 With the cooler weather, the jalapenos, habaneros and bell peppers have really taken off, and they’ve been piling up in the refrigerator, so I finally decided to do something about it. First I made a batch of habanero hot sauce (no pictures), and when the hot sauce was all mixed up, Fred took a little dab of it and put it on his tongue, and reported that his tongue burned for five minutes afterward. He doesn’t know that he’s going to use an entire batch of the stuff in this lifetime, but it’s good to have around in case he wants to add heat to something, I suppose. Then I took care of the jalapenos: 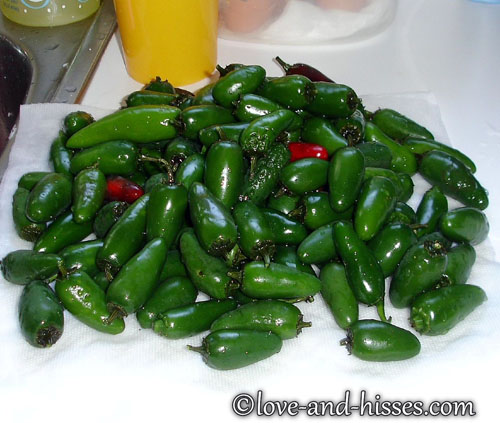 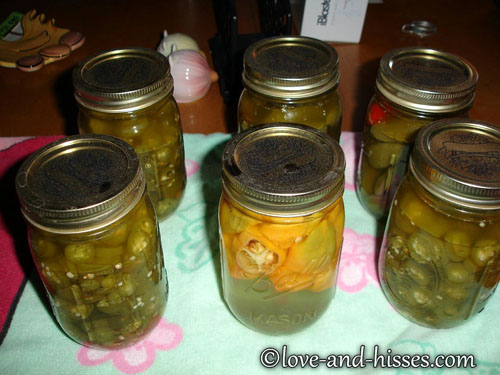 I use this recipe for the pickled jalapeno peppers, but I don’t use the pickling spice (Fred doesn’t like the peppercorns) or the bay leaves. And I used this recipe for the Habanero Hot Sauce (scroll down). Oddly, that recipe is the exact same as this one, but the one I didn’t use calls for 1 1/2 cups of white vinegar. That might explain why my hot sauce ended up being so thick. I think I need to go add white vinegar to the stuff I made, and see if that works a little better.

Once those were done and cooling, I did what I’d been meaning to do for quite some time: I made and canned spaghetti sauce. 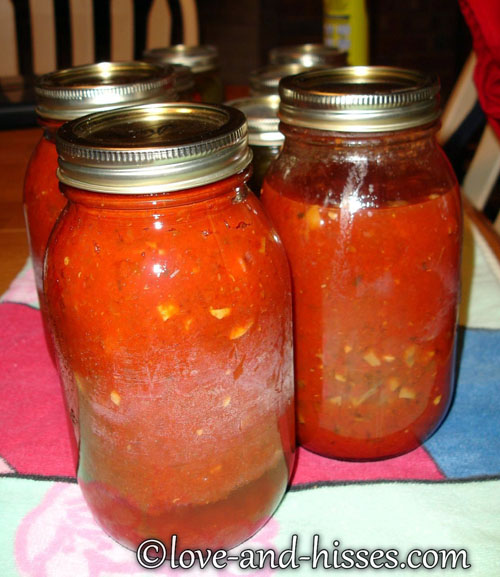 My recipe: Approximately 12 cups of tomato sauce (made and frozen at a previous date by moi); a small can of tomato paste; a package (8 ounces, I think) of mushrooms, chopped coarsely; 1 medium onion, chopped coarsely; a couple of cloves of minced garlic; a generous sprinkling of Italian Seasoning, and plenty of salt (I thought I’d added too much, but a taste test told me that I absolutely didn’t). Mix together, bring to a boil, turn it down to a simmer and let it simmer for about an hour, or until it’s reached the thickness you desire.

I ended up with three quart jars of spaghetti sauce, and I tell you what – this stuff was GOOD. I processed it for 25 minutes in a steam pressure canner (at ten pounds) and let the jars sit overnight. One of the jars didn’t seal, so rather than re-process it, we had it last night with leftover meatballs, over angel hair pasta. I thought it was really good, but Fred especially sang the praises of the spaghetti sauce.

One caveat: I didn’t know until after I’d canned the spaghetti sauce that onions and garlic aren’t particularly recommended in canned spaghetti sauce, because they can turn bitter. Had I realized that, I would have frozen the spaghetti sauce instead. The sauce we had last night wasn’t bitter at all, but I don’t know if it’s the canning process that’s supposed to turn them bitter, or sitting in the jar for a long period of time. 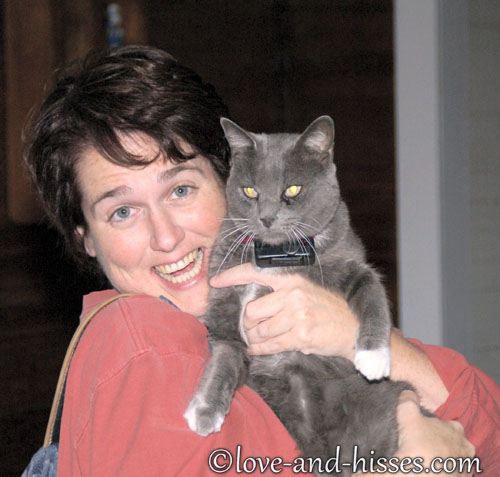 “You might have mentioned that I looked like an idiot before you snapped the picture. Is my head really that big?” 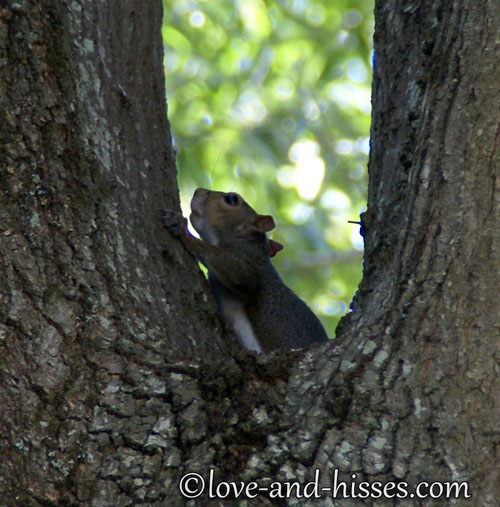 Fred took this picture a few weeks ago, and since he hasn’t used it yet, I’m claiming it for my own journal. 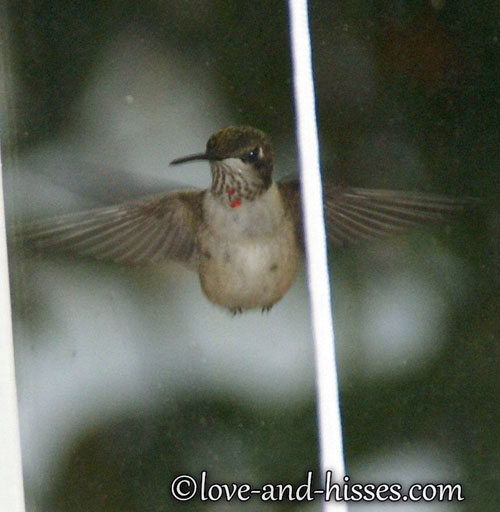 I honestly didn’t expect this to come out so well – I snapped it through the window (that white string hanging down goes to the blinds). 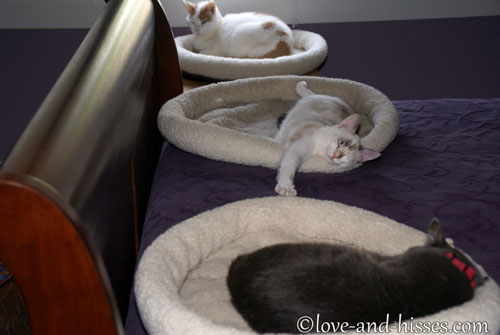 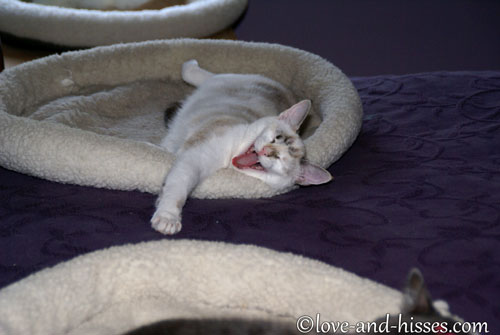 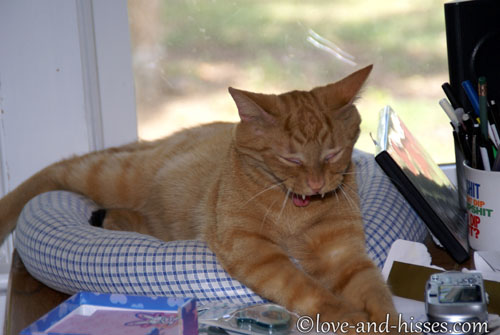