Kathy said: Glad you are in place and have kittens! BTW we have a kitten born April 12 and I am so curious about what his eye color will be. Don’t know about his parents; at the moment his eyes are IDK a moss brown. Any thoughts? Thanks!

Katherine said: Eyes usually start to change around 6 weeks so you are probably seeing his permanent eye color now. Mossy brown is very unusual in a cat!

Kathy said: Thanks for the information. Maybe a better description would be as though they were going to change from green to darker gold, then got stuck :). He’s a ticked tabby, so they match his grey coat.

Cats and their eye color is an interesting topic to me – in my experience the color doesn’t really change much past 6-9 months (which your guy isn’t yet, so his eyes may still change for the next little while). But when we first saw Newt in 2006 at about 1 year old, he had eyes that were a golden bronze-y shade, and in the years since they’ve turned green. They were green by the end of 2009, and they’ve stayed green since but have lightened.

Here’s a collage that shows his eye color through the years. 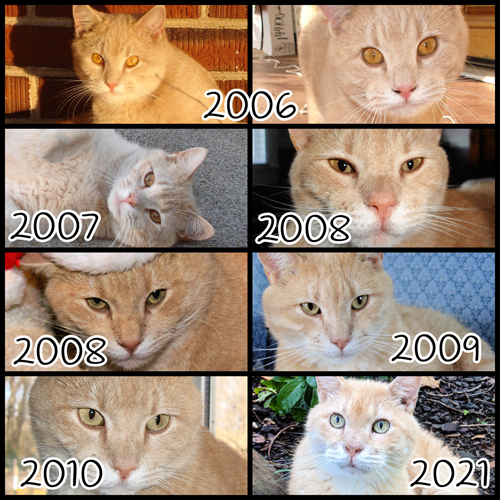 He’s the only cat I’ve ever seen that change in, but maybe it happens all the time? (I don’t think it does, though.)

And yes, I am 100% sure that that’s the same cat. Newt has a spot in his tail near the end where it was (the vet thinks) broken and then healed. It was there as a kitten and it’s still there, ergo: same cat.

If he were someone else’s cat, I might wonder if there was a health issue – but since he’s ours and I know that he sees the vet every 6 months I’m not. His only health issue is his thyroid (which he’s on medication for) and some joint stiffness (which he’s on Cosequin for), so it’s a mystery.

I just read the 2017 post where Belle is giving the the Ultimate Stinkeye. What an awesome cat. She was a true character!

Does Theo have a little Stompitude in him? Every time I see a little orange kitten I can’t help but think of our friend the one and only Stompers!

Theo is actually more timid than Stompers was. He likes to be petted and to sit in my lap, but is hesitant about climbing into my lap. Sofia Soy Sauce actually has more of a Stompers attitude!

Does Tia have an orange blotch on her back?

She does! She has random orange blotches all over, including the one on top of her head that I call her angel’s kiss.

Does Sofia Soy Sauce hang with you a lot? I ask because she seems to be missing from most of the “group” photos of the kittens. Can’t get enough of that adorable little one.

Sofia Soy Sauce is a total lap kitty and we always have some snuggle time when I first go into the room. Sometimes she stays and snuggles, sometimes she runs off and plays after a few minutes, I never know what I’m gonna get!

OMG the horror story of the flooring! Were you able to return the stuff that didn’t work? And how the heck are people supposed to know what won’t work? Are you supposed to have installers look at the place before ordering?

Yes, we were able to return the stuff that didn’t work, thankfully. Part of my own personal gripe about the flooring issue is that the installation company sent someone out specifically to measure the rooms so that we’d know the correct number of boxes of flooring to order. At that point, WOULDN’T IT MAKE SENSE for the guy to say “This is the kind of flooring that will work best in this situation”? But NOPE. He measured, he proclaimed that our staircase was “Dope” (that’s a good thing, if you were wondering, and he is correct it is very “dope”) and he passed the measurements along to the main office. I feel like a lot of nonsense could have been avoided if we’d known BEFORE WE ORDERED what kind of flooring would work best.

I love that the permanent residents loved the foster room– it shows that you really saved the ~best room~ in your house for the fosters and THAT is part of why you are amazing!!

Have you heard anything further from Fizzbin’s new family? She was my personal fav from Canasta’s litter.

Not recently, no. Last I heard, things were going great and she had settled in very well.

Will the cats be able to climb any of the trees in the backyard or are they all too close to the fence?

There are two trees that are located very close to the fence – we (Fred) dealt with that by putting up braces and fencing around the trees so that the cats could only go up as far as right below where the branches branch off. The other three trees are far enough from the fence that the cats can climb them if they want – but I haven’t seen them do any climbing yet. I’m sure it’s only a matter of time!

Ah, yes. The joys of moving cats into a new home… I never realized how much smaller Jake is to Khal!

Jake is definitely much smaller than Khal – but of course Khal’s floof makes him look even bigger than he is.

And how cool is that attic space, did you not know it was there?

We knew there was attic space back there, but had no idea how much there was to it (or that the flooring was such that we could safely walk on it) because there were racks of clothes in front of the access door and we couldn’t get to it.

I’m so happy you and the gang are happy in your new abode, but…I would have killed for your old place and I’m sorry to see it go!

If we could have picked up that whole house and moved it to an acre of land in a quiet location, I’d have been happy to do so!

Speaking of sound… are your new neighbors fireworks fans? I remember that was something you were happy to leave behind when you moved to Shady Cove. I’ve heard that the kibosh on public gatherings due to the pandemic has driven up sales of both legal and illegal fireworks pretty much everywhere.

We haven’t lived here through a holiday yet (we owned the house on July 4th but weren’t living here yet), so I don’t know for sure – but I will say that I expect there are probably fireworks fans out here. The seller said that they never heard fireworks, but I’m skeptical of that. We’ll certainly see! (And as it turned out there were fireworks fans in the city too, so it’s not likely that we’ll ever successfully get away from people shooting off their own fireworks until we win the lottery and move to a private island in the middle of the ocean.)

Are you going to keep the P.O. Box or get one closer to the new home?

I’m going to get a PO Box closer to home – I haven’t yet, but plan to do so very soon!

Love all the photos!! And since you mentioned your bedroom is downstairs, I was wondering which downstairs room the kitten room is over and how it sounds with the li’l Dippers running around. And thank you in advance for tracking the painting progress – of all my online addictions, interior house painting is definitely the weirdest.

The kitten room is actually located right over the living room – and those kittens race around a lot but I never hear them at all. Even when they get bigger and make more noise, I doubt I’ll ever hear them from my bedroom.

What type of flooring did you initially order that didn’t work out with your out of level floors? I suspect this will be a problem for me, too.

We ordered some sort of Pergo laminate – the installation guy said that they could install it if we really wanted, but when we walked across it the floor would sink in the low spots as we walked over them. And since the previous owners put laminate flooring in the downstairs I can tell you that that’s exactly what happens. There are spots in the downstairs where I feel like I’m walking across a listing ship. (We are eventually going to replace that with the vinyl.) We ended up with Procore Luxury Vinyl upstairs, and it doesn’t move at all.

Side note: After the installation guy came, told us they couldn’t install and left, I told Fred “I guess that makes naming this place easy. We’re gonna call this place Crooked Acre. Without the “s” because it’s just the one acre.”

Maybe I missed it, but why the move?

There are too many people in the city, as it turns out, and the back yard was not in the slightest bit private. Our neighbors were lovely, but walking outside and having people outside on both sides of us RIGHT THERE is something that was unappealing to us both. (And look, I know that people gotta live their lives, but the lady behind us ABSOLUTELY ADORED sitting on her back deck and having phone conversations AT THE TOP OF HER LUNGS and no one wants to listen to that for hours on end. Is all I’m saying.) We also wanted to have a little land so we could have a small garden and some fruit trees… and possibly a few chickens. We basically went from one extreme at Crooked Acres (in the country on 4 1/2 acres of land) to the other (in the city on 1/3 acre, all treed) and it didn’t work for us.

Do you still have the Kia Soul, (12-11-17 Monday) The cats were split into three sets for their stay at the vet – Jake, Alice, Kara and Joe Bob together; Stefan, Dewey, Khal and Frankie together; Newt, Maxi and Archie together. Hope the move went well.

Yep, I still have the Kia Soul and still love it! (And the move went great, not least because the cats didn’t have to be boarded at the vet at all.)

Have you noticed any critters wandering your property yet? Wonder what surprises await you there?!

So far we’ve seen a few rabbits, a couple of frogs, one chipmunk, a few spiders, and a bazillion hummingbirds!

Very important question – do you ever still call Khal “Fancypants“? 🙂

We do not – we call him “Floomp” almost exclusively! 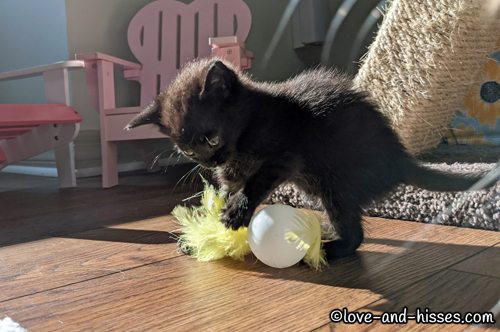 Who Sofia Soy Sauce (above) reminds you (and me!) of: 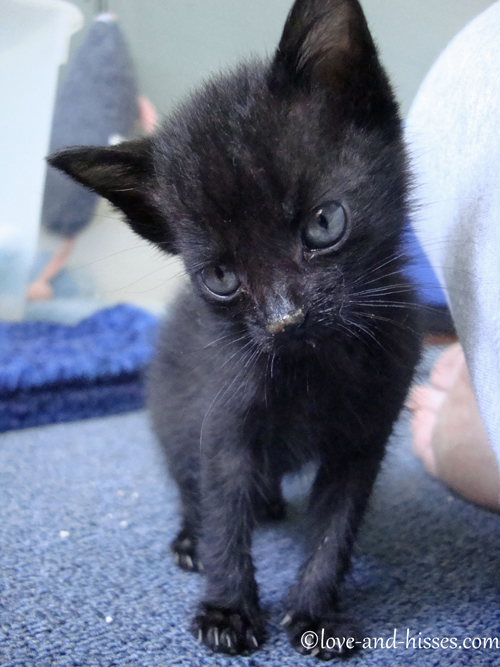 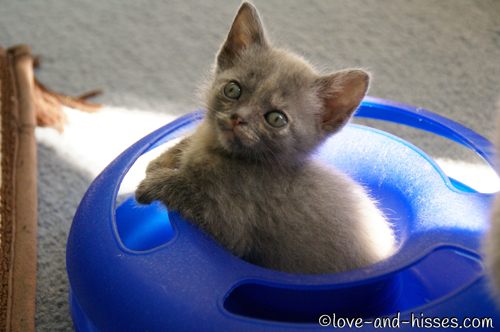 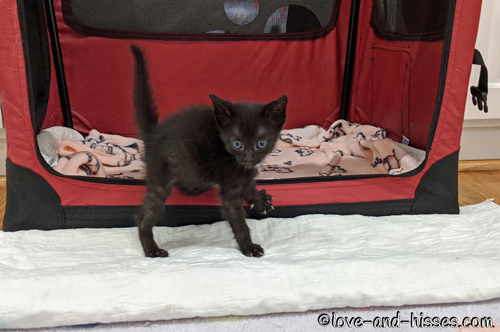 It’s the great big foreheads and the big ol’ alien eyes that does it, I think. 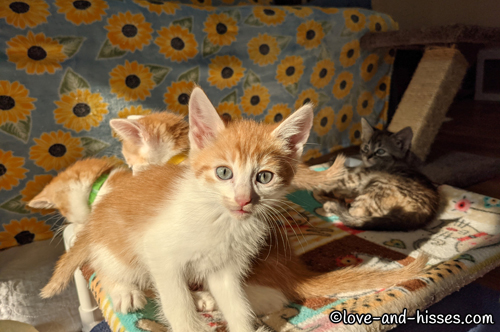 Alfie Alfredo keeps an eye on me. 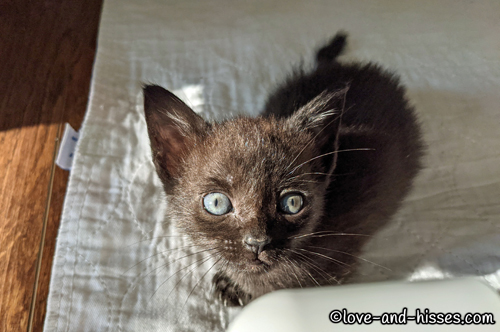 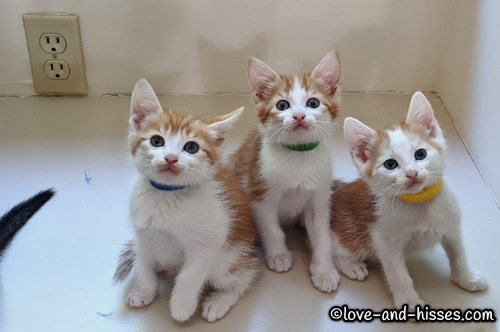 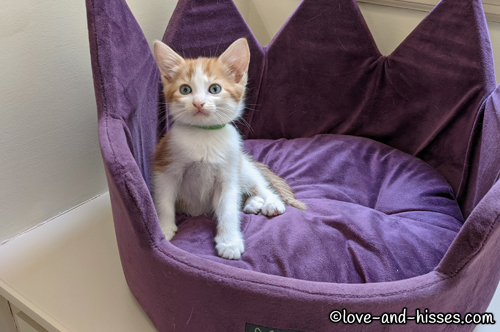 Franco Fondue has had a disturbing thought, apparently. 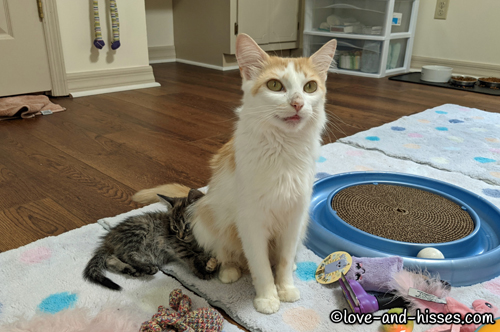 Molly Marinara is wondering if it might be eatin’ time. 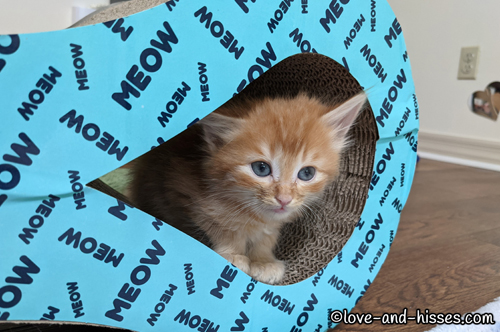 Theo Pesto is lost in thought. 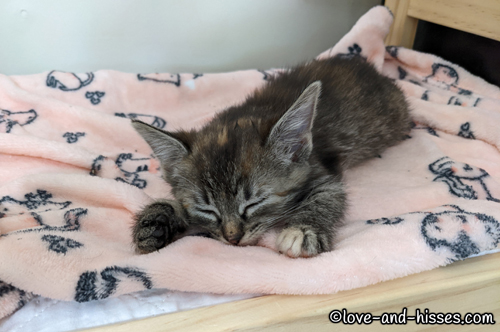 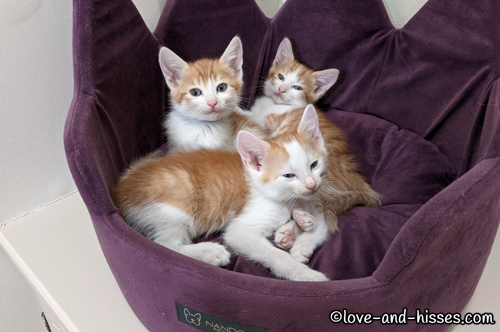 The little princes, in their bed. 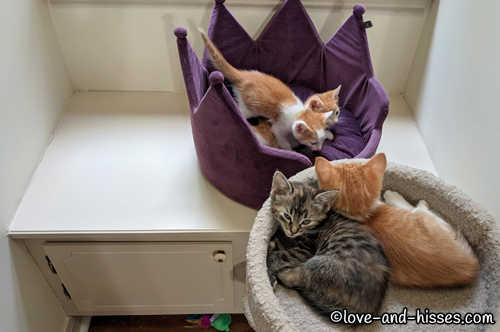 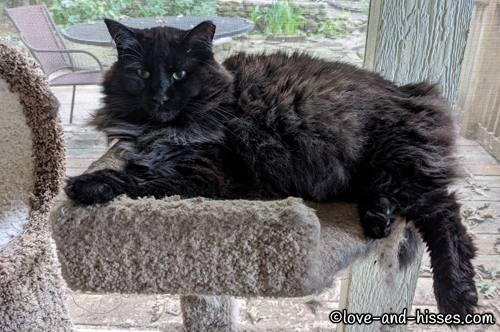 I’m pretty sure this is the last shot I got of Khal at the old house.