Annnnd we’re back! I’ll do a more in-depth post next week about the move itself, but the long story short is that my back is completely better (funny how actually taking a few days off from aggravating it will do that) and here are a few pictures of the progress of the kitten room.

This is what it looked like a few days after we closed on the house. 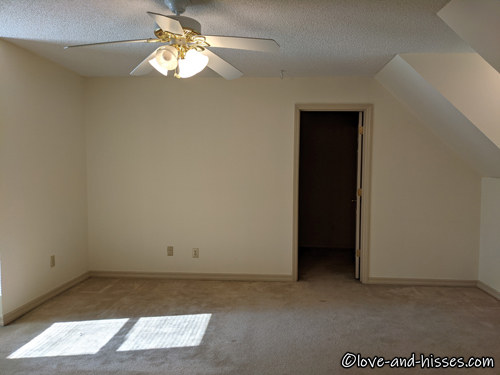 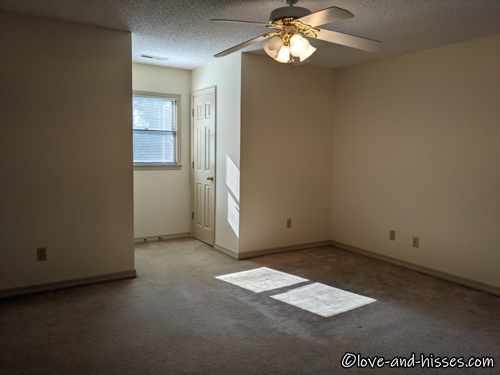 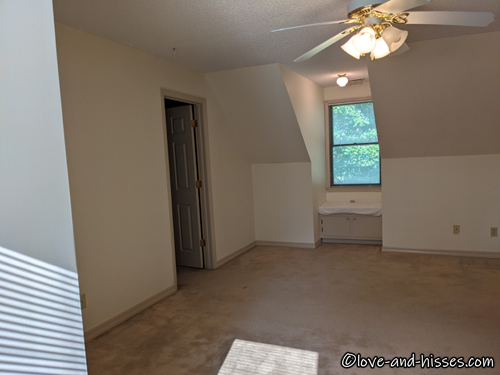 This is what it looked like the day before we moved in. 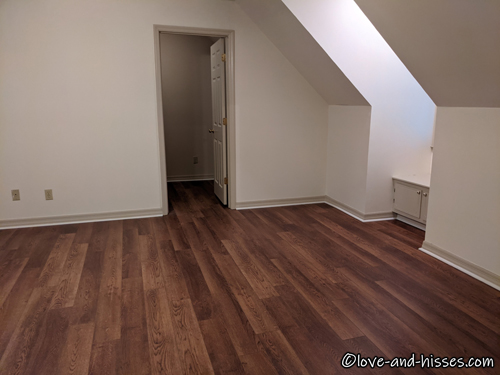 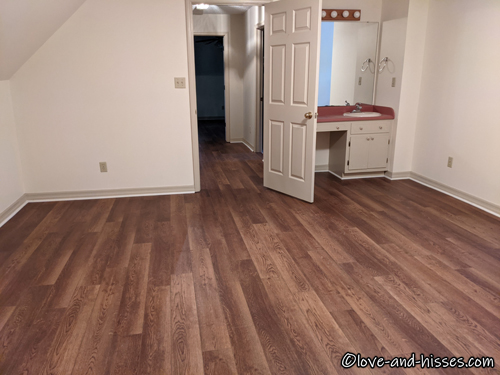 That is vinyl flooring, and I think it improves the look of the room approximately 1000%. (Also, that room is eventually going to be repainted. I don’t know when and I don’t know what color, but that is far too neutral a color for me.)

And this is what it looked like two days ago. 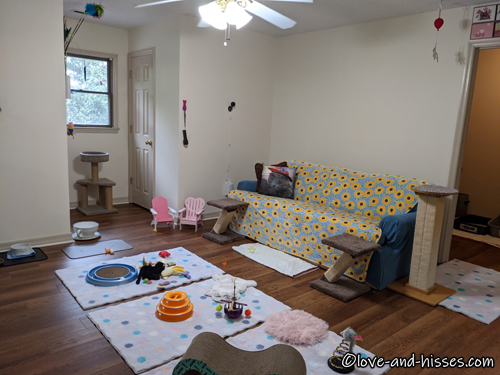 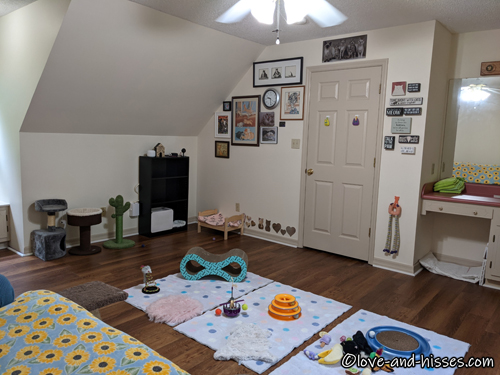 Y’all ready to meet the new fosters? Here we go! 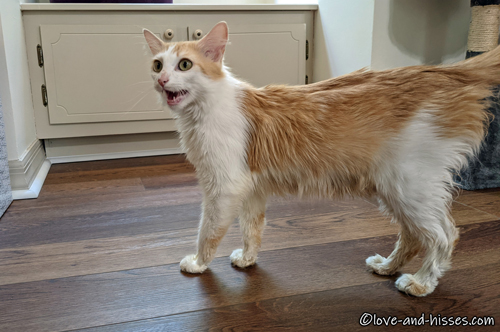 Here’s Mama Molly Marinara. She is floofy and gorgeous and oh so sweet. She looks a little rough because she had an accident in the carrier on the drive home from Michelle’s house and needed a partial bath. I don’t know how old she is, but she strikes me as young – I’m going to say she’s 2. 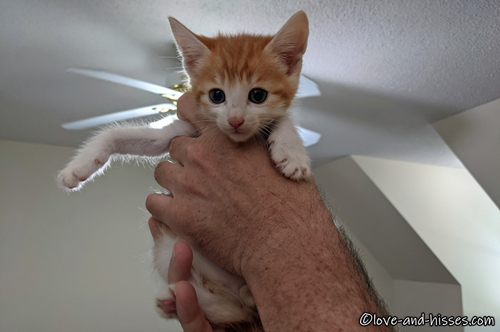 Orange and white boy Alfie Alfredo. You can’t see his collar, but it’s blue. Also, he doesn’t have a white stripe up his forehead, which is how I differentiate him from his two look-alike brothers. 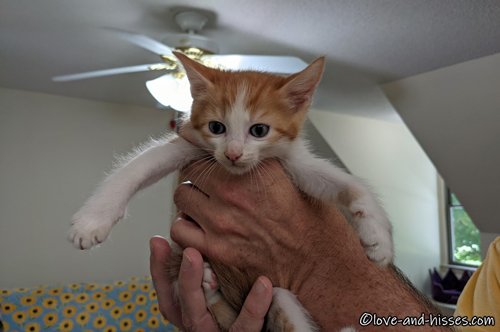 Orange and white boy Franco Fondue. He’s got a green collar and a thin white stripe up his forehead. 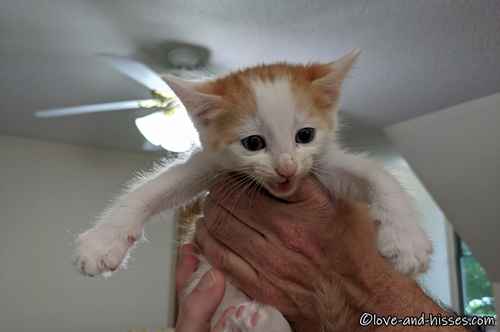 Orange and white boy Christopher Chutney. He’s got a yellow collar and a thick white stripe up his forehead – kinda looks like someone was trimming his bangs and lost control of the shaver. 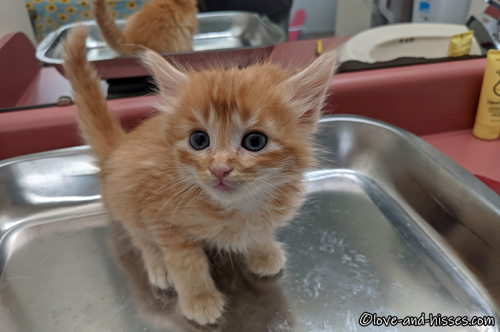 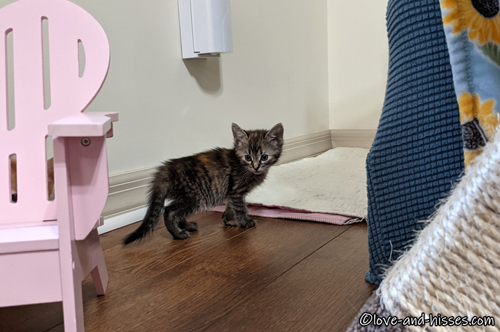 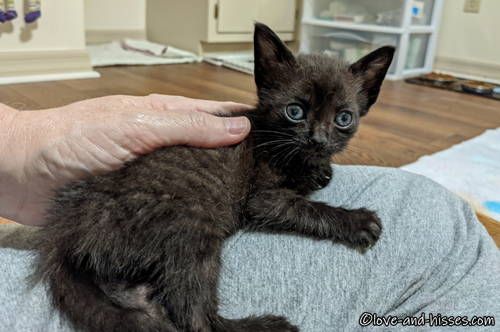 Molly’s story is a familiar one: she was a hugely pregnant stray wandering around a neighborhood looking for a safe place to have her kittens. Someone called Michelle, Michelle took her, and all of the kittens except Sofia Soy Sauce were born on June 4th. That makes them 7 weeks old today.

Add-in Sofia was found, all alone, on a loading dock in a rural town and luckily Molly was willing to care for her. Sofia’s much smaller than the others, but judging by her teeth Michelle thinks she’s only about a week younger than the others. She eats great, she plays with the other kittens (they seem to regard her as kind of a pesky little sister) and uses the litter box like a champ. I suspect she’ll find her growth soon enough.

Here are a few pictures I took right after I got them home. 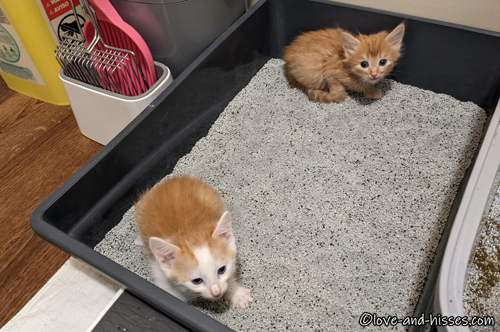 I always put new kittens right into the litter box when I get them home so that they’ll know where they are. Christopher (front) and Theo apparently thought they were supposed to stay there (they eventually wandered out.) 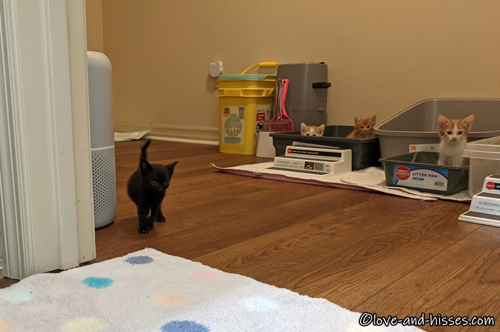 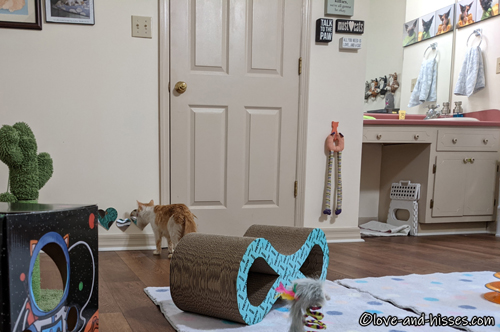 Molly checks out the sights. 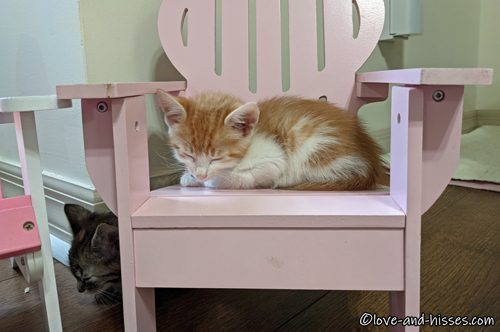 So, given their names – Molly Marinara, Alfie Alfredo, Franco Fondue, Christopher Chutney, Theo Pesto, Tia Teriyaki and Sofia Soy Sauce – anyone got suggestions for what to call the litter as a whole? The individual kittens have names (please do not suggest names for the kittens, THEY HAVE NAMES and when people suggest names for already-named kittens, it makes me want to flick them on the forehead really hard) – I need a name for the entire litter. I thought of The Sauces (copycatting Random Felines), but I don’t think that fits here. Suggestions? Please? 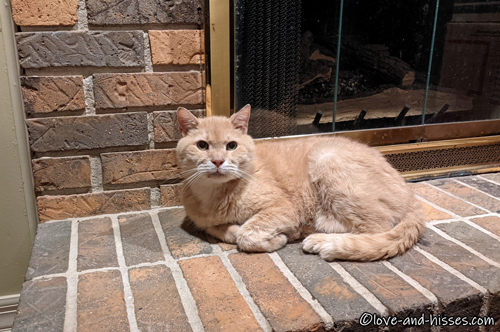 I’m not entirely sure Newt realizes we moved, to be honest. He didn’t miss a beat.