First things first: Norland (aka “General Grumpy”) was adopted on Saturday! And not only that, but there were a total of five adoptions over the last week, so maybe this means adoptions will pick up now. Fingers crossed!

This leaves Logie, Newbery, Razzie, and Cap’n Floof (Russet) still at Petsmart, waiting for their forever homes. I feel like this is going to be their week!

Remember a couple of weeks ago when Gail asked for suggestions on how to fatten up her new kitten? (You can read here for a refresher.)

Well, I have an update! Gail says:

So, as I am now the official owner of Micah, he is being renamed Tyrion Micah. I am almost positive he has dwarfism. He goes for testing next week at my awesome though 1.5 hour away vet. He hasn’t grown in three weeks. Well, a tiny bit in the legs but that could be from being stronger and standing up. He is still 14 oz as of yesterday. But he has only been with me for two days. He eats a mixture of liver, chicken baby food, soaked baby cat kibble, and blue wilderness kitten. All ground up. Going to try to get him up a bit before testing. He has met the cats and is playing his heart out! I have hopes that he will thrive to the best of his ability. I will send a pic of him with his overbite ( licks up food fine) and with my big boy Mist who I think may have some Maine coon in him :). I may have to start a dwarf kitten blog. My husband says no more. What is six, or really 5.1 cats? 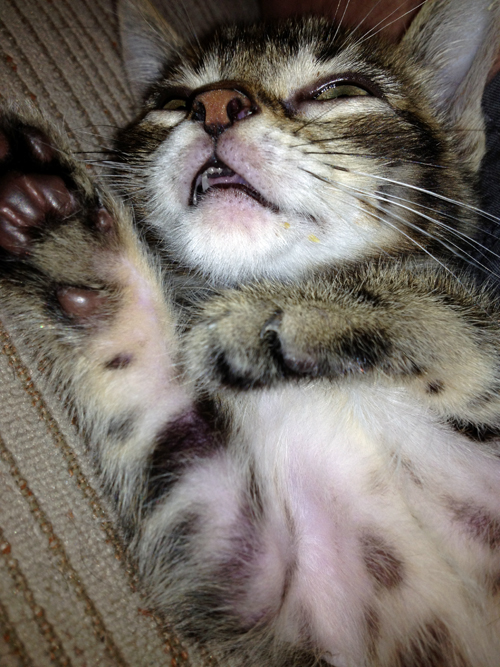 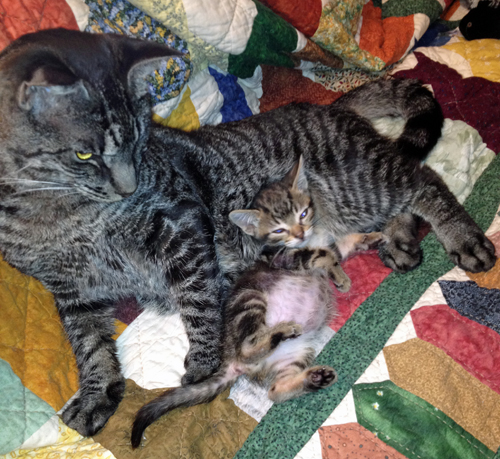 I don’t know about y’all, but I think Gail DEFINITELY needs to start a dwarf kitten blog! Isn’t he the cutest little thing you’ve ever seen?

Thanks for the update, Gail!

Back in February, I introduced y’all to the cats who were, as my fosters, Javert and Eponine. They were adopted together and renamed Gus and Belle, and I got updated pictures of them from their mom, Eileen. You can read about them here.

Well, Eileen and her husband built a mini cat staircase for Gus and Belle and their long-term boarder cat Pishi, and you can see it over on Jackson Galaxy’s Catification page!

(Fred said, when I showed him the picture and told him who Gus was, “Well, isn’t he living the life of Valjean!” Ha.) 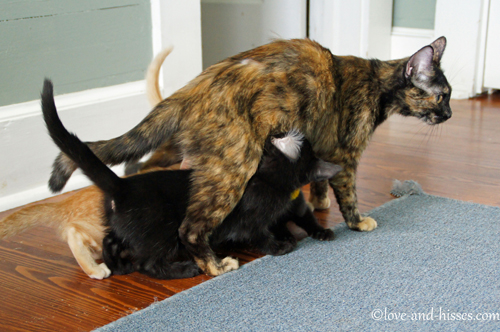 Brandywine, harassed by the little ones. 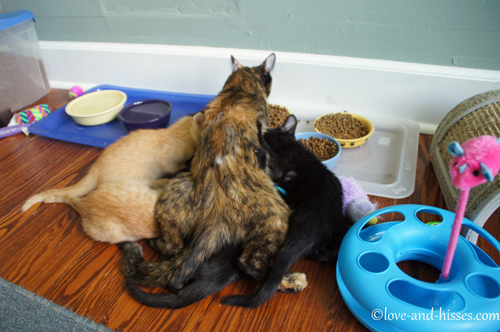 I’d feel sorrier for her, but she does have the ability to get away from them when she wants to – she just doesn’t want to, it seems. 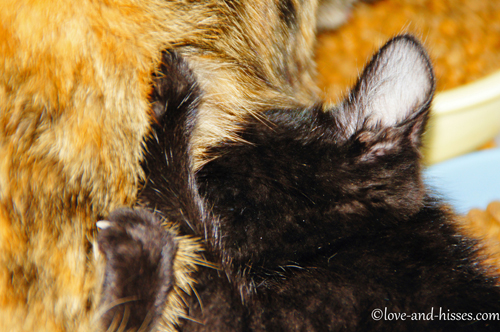 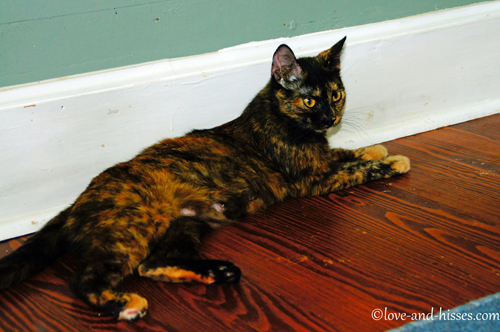 This picture is from before she was spayed, obviously, as her tummy isn’t shaved. 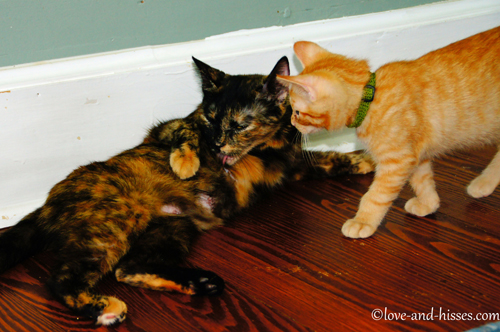 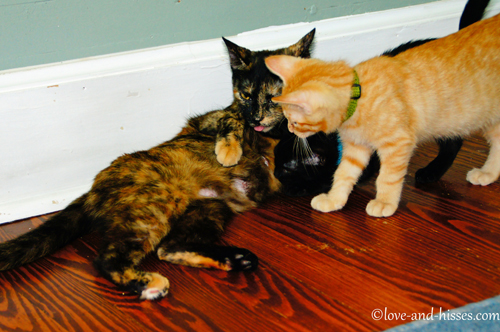 “One minute, child. ONE MINUTE, that’s all I ask!” 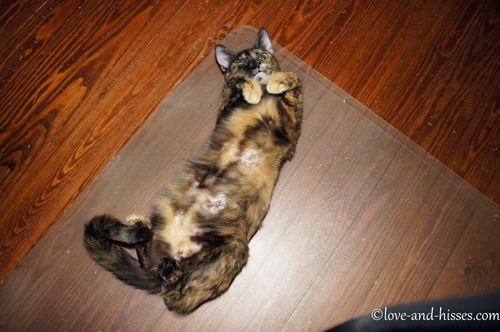 Rolling around in the computer room (again, before she was spayed.) 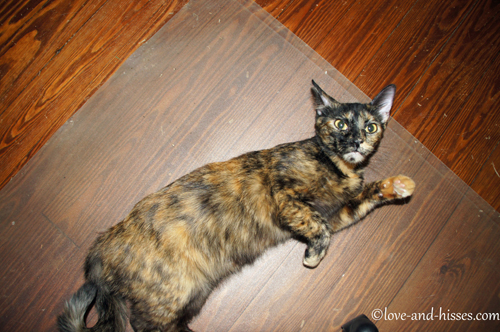 Giving me a Hard Look because she’s pretty sure it’s time to eat. 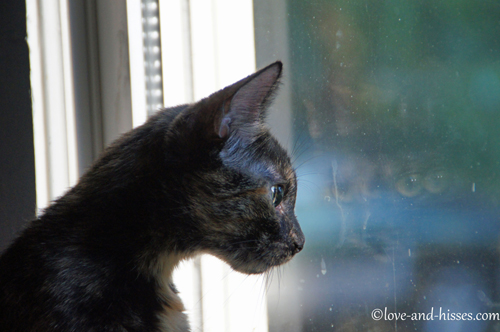 Brandywine reflects that it’s high time someone cleans this window.

The little ‘Maters are going to be neutered tomorrow. I made the appointment, and then I worried that maybe I was wrong about Caspian being over two pounds. So I reweighed him, and he’s just over two pounds, so off they go! Tonight’s going to be super fun, because I’ll be taking everyone’s food away at bedtime, and they are NOT going to like that. At least I can get them off to the vet early in the morning.

Guess who else is going to be neutered tomorrow? 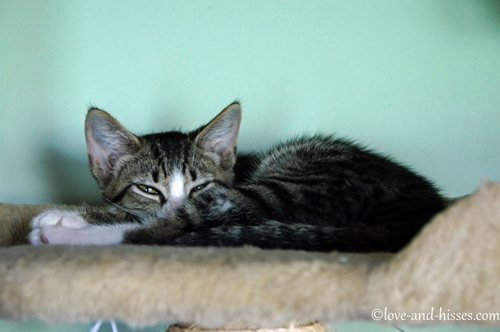 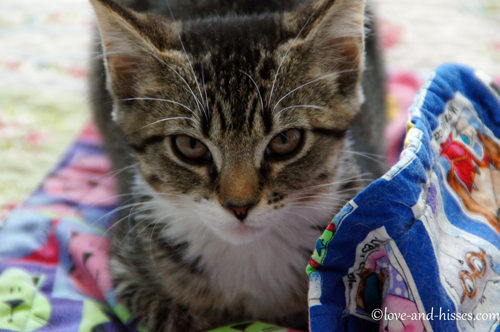 “I will cut you if you try to put me through that again.” No, not Agata, either. 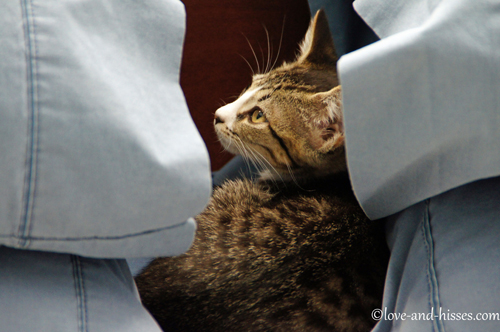 Fianna’s just going to hide ’til the talk of neutering has stopped. 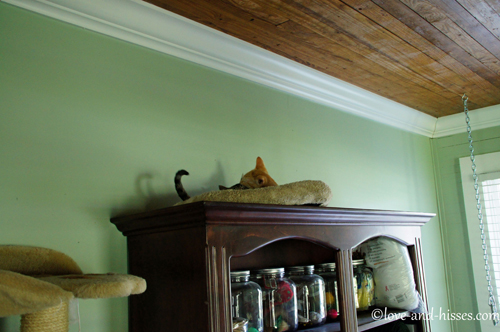 And Kennebec (not him, either) and Agata are going to hang out on top of the bookcase where I can’t reach them. 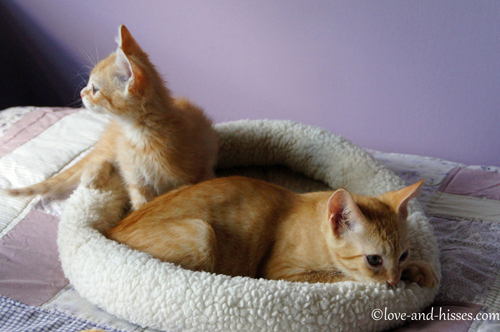 Kennebec’s pretty sure he’s invisible when he’s “nursing” on the cat bed, but Stompers is all “What’s that, you say?” 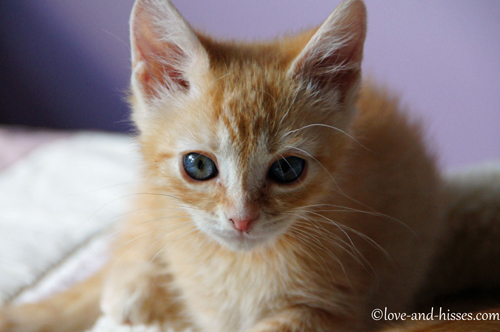 That’s right – Stompers now weighs over two pounds, and he’s going to be neutered tomorrow with the ‘Mater kittens. And then he’s going to have his last vaccinations.

And on Thursday, he’s going to his forever home. 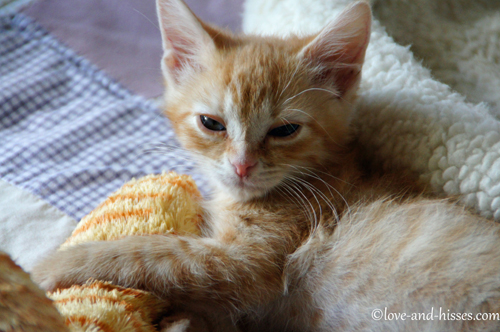 “Do they know about the kissing?” 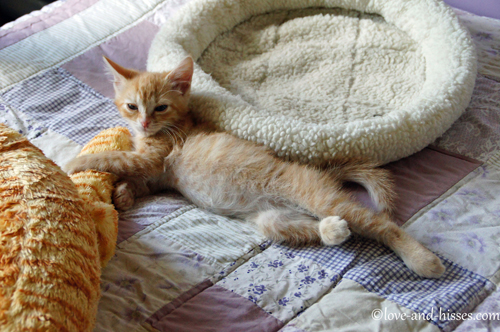 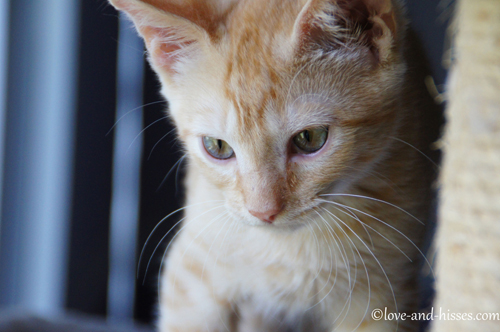 “With that whippersnapper out of the way, I bet my kissin’ quotient will be going up a LOT.” 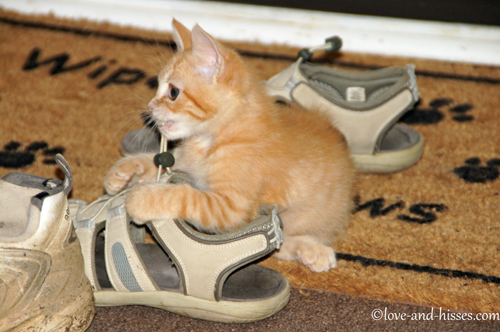 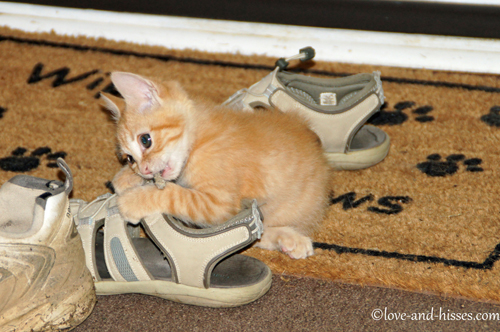 I’ll make sure they know, little one.

So, yes. Stompers will be going to his forever home in Georgia later this week. And I’m excited that he’s going to go to his new home, but of course we’ll miss him around here a lot. Until then, I will kiss him one million times, and snuggle him as much as he’ll allow (luckily, he allows a lot of snuggling!), and take a zillion pictures. 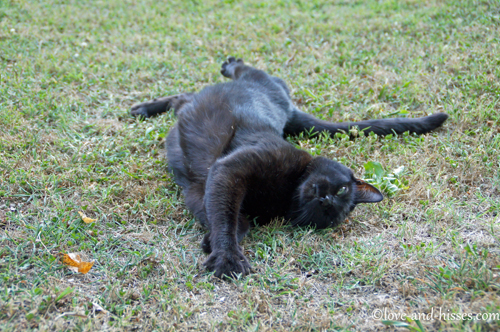 Tommy sure does love to roll around in the grass. First one way… 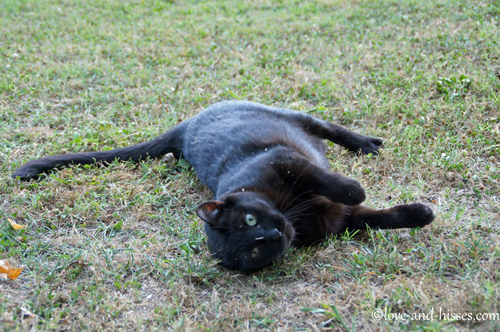 …and then the other!