Would you look at this sweet face? That is the face of a cat who was pretty overwhelmed with 7 kittens this time three years ago. You know her as Lucy (or Lucille Ball, if you’re going to be formal). She’s now Gilly, and she’s one happy girl. She still spends lots of time upside down. I have more photos of her this way than right side up!

And a belated happy birthday to her kittens the Fools. One of whom you can see right here: I could not let today go by without posting a birthday update! Today this little booger turned three!!! Ty and I just could not imagine the world without Mr. Gir Shecky! He still runs the show, is still super dramatic and still gets his way with everything. Happy Birthday to The Fools!!!

If you’re not following Gir Shecky’s brothers Red (formerly Skelton) and Georgie (formerly Carlin) on Instagram, you oughta be – you get to see their big brother Bill (from the True Bloods) too.

(Thanks for letting me share your pics, Pam & John!)

Also, happy birthday to Nola’s Cajuns – two of whom, Andre (formerly Andouille) and Bella (formerly Beignet), you can follow over on Facebook! Brian Boitano’s all “You get away, Tessa! Oksana is MY snuggle buddy!” Kristi considers her life choices. (Debi and Picabo were snuggled in the front corner of the crate and didn’t fit in this picture.) Dean was trying SO HARD to get into the big litter box, but couldn’t quite make it. Katarina and Oksana check out the view from this crate. (It looks like Oksana’s head is 3 times the size of Katarina’s, but it’s because she was closer to the crate opening.) Oksana’s got the crazy eyes. 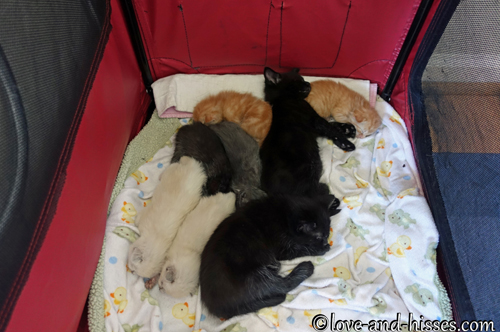 Torvill and Dean, asleep amongst the little ones. 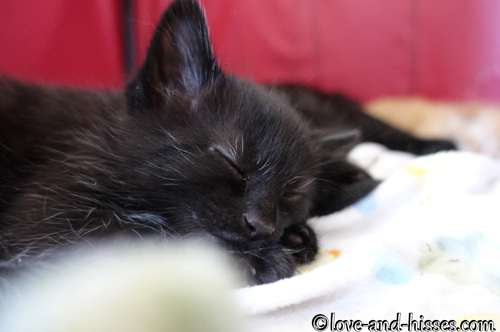 Torvill. SUCH a pretty boy!

You know that Brian Boitano has an extra thumb, as seen here. 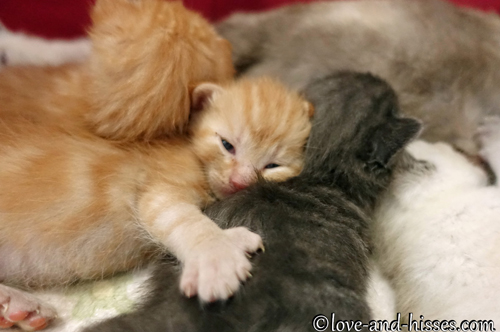 So I was looking at the kittens the other night, and suddenly realized that he’s also got an extra toe on each of his back feet. 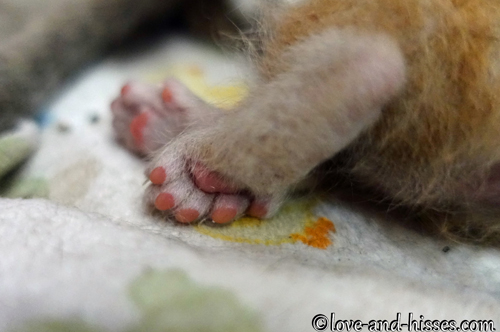 How on earth did I miss that?? To recap: Brian Boitano has an extra thumb on one front paw and an extra toe on each of his back feet. That’s a total of THREE extra toes.

I did take a second look at all the other kittens’ toes, but it appears that Brian Boitano is the only polydactyl in the litter. 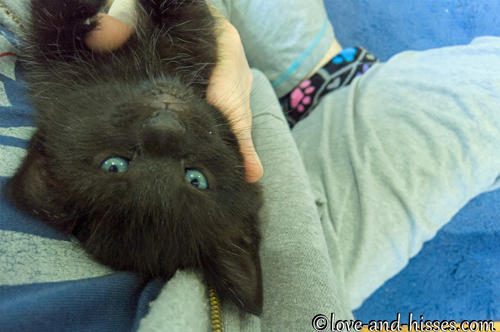 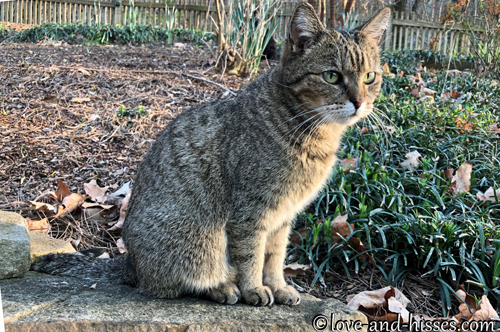 Were you wondering at all what kind of creatures the cats would be bringing into the house now that we’re in a rocky location rather than the fields we were surrounded by at Crooked Acres? Well, at this point in time the answer is: skinks. First Stefan brought one inside the house yesterday morning, and Fred scooped it up and took it out into the front yard and let it go. Then in the afternoon we saw Alice looking very intently under the secretaire in the computer room, and I pulled out the drawer to find another skink, which went out into the front yard, too. (Fortunately neither of us is ooked out by lizardy creatures.)

We’ve rescued a couple of chipmunks (or possibly the same chipmunk twice, who knows?) from Kara and Frankie in the back yard, but none have made it into the house. YET.