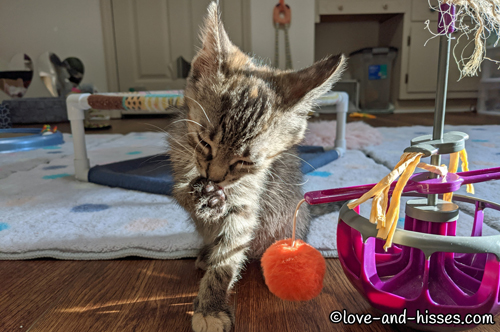 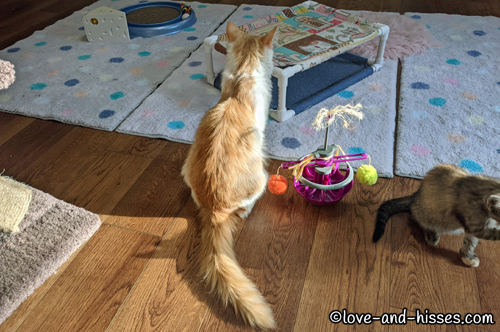 Molly Marinara has the outline of a kitten on her back, if you hadn’t noticed. 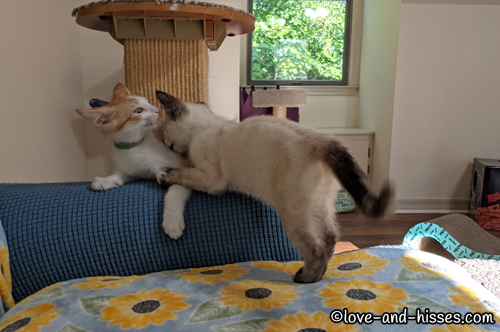 Hannah Hollandaise puts the ol’ chomperoo on Franco Fondue – who looks more amused than anything. 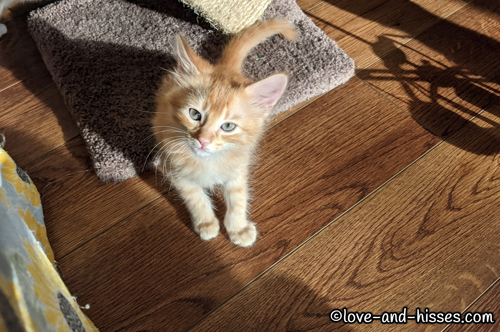 Theo Pesto in the sun. 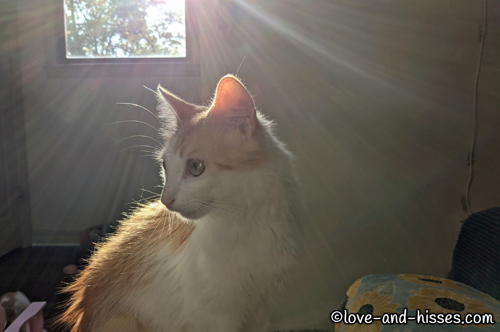 Molly Marinara in the sun. She is SUCH a pretty girl (I know I never mention that.) 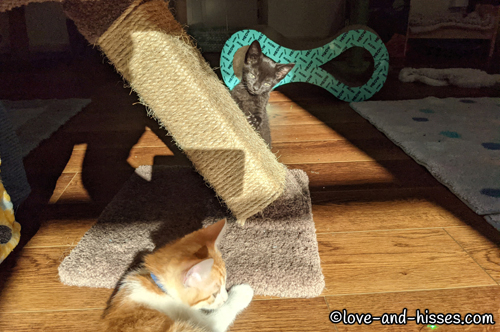 Sofia Soy Sauce is keeping an eye on Alfie Alfredo. 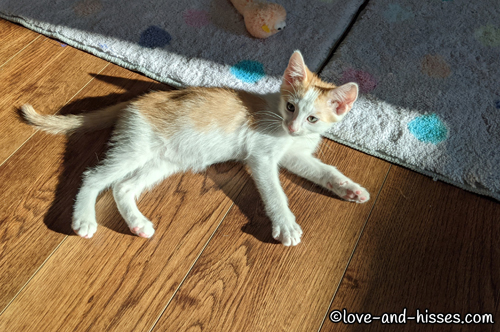 Christopher Chutney in the sun, needing a squeeze.

When one moves into previously occupied home, there are always little oddities. In this house, there’s this hook in the ceiling of the foster room. I have no idea what it was used for (it looks like a hook where you’d hang a plant, but that seems like an odd location for it), and since – for now – I’m just using things as they are (all the pictures on the wall are using the nails that were already there; as we repaint the house, pictures will be moved, I’m sure), I thought I’d hang this – a felt cat hanging from a balloon, created by local crafter Foxes and Felines – from the hook. I think it’s cute up there, and none of the fosters have given it a second look. 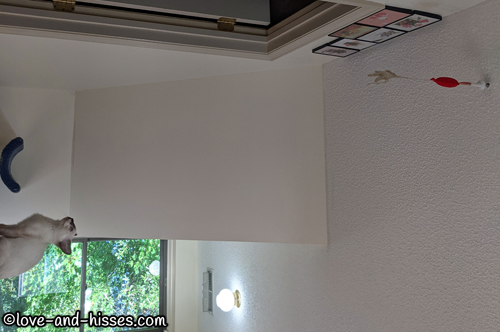 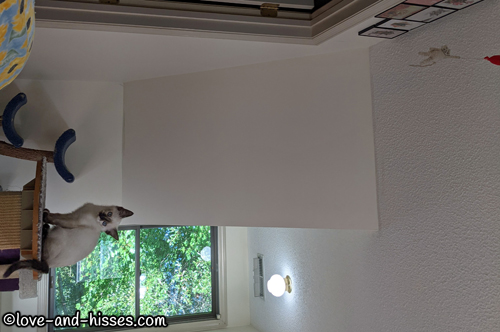 “I bet I could jump high enough to grab that!” says Hannah Hollandaise. (She hasn’t tried yet; I’m probably going to move it so she isn’t tempted.) 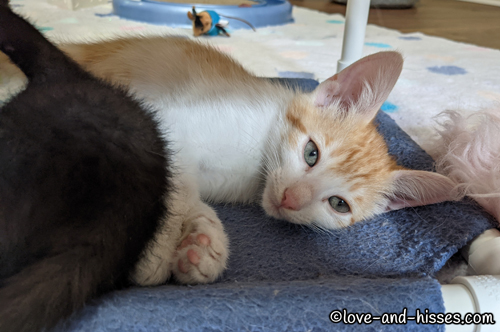 Alfie’s got the sleepies. 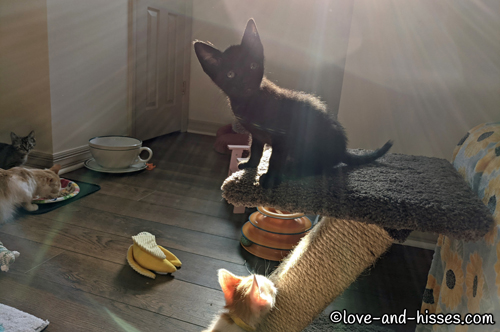 Sofia Soy Sauce is pure sunshine, is what she is. 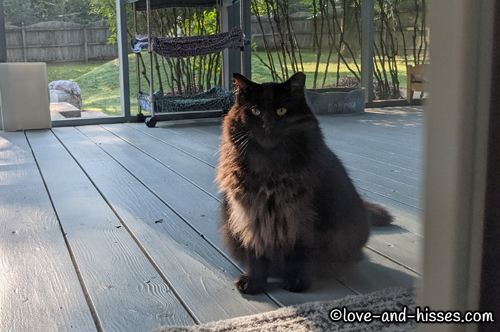 Khal’s keeping an eye on me, magnificently. 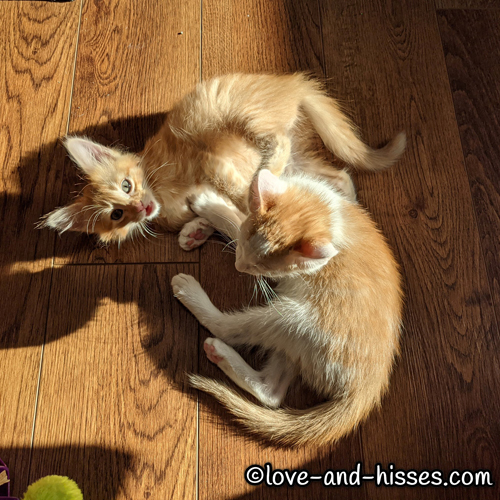 Theo Pesto and Christopher Chutney are tusslin’ in the sun. 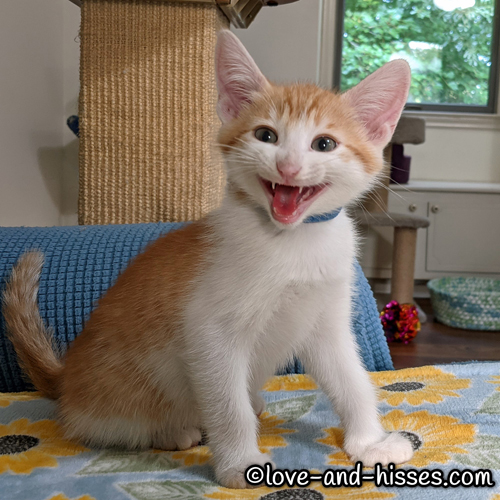 “Oh gosh HIIIIIII innernets! How you doin’?! I haven’t seen you in forever, you look fabulous!” says Alfie Alfredo.

YouTube link
This is a very very short one, but I try to grab these sweet moments when I see them! 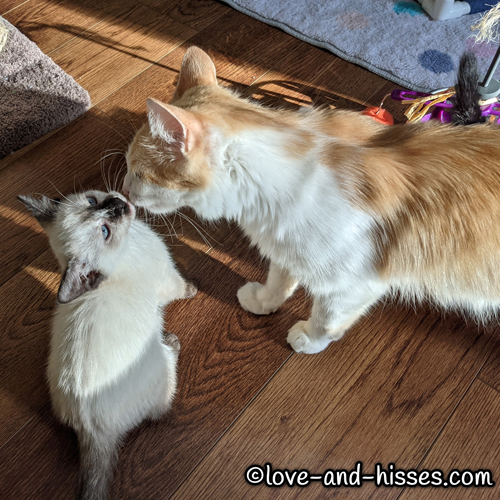 Molly Marinara initiated this contact and Hannah Hollandaise was all “I suppose my chin could use some cleaning, thanks!”

YouTube link
Milk bar shenanigans. Watch as the kittens nurse… and occasionally use Molly Marinara as a jungle gym. She’s such a patient mama. 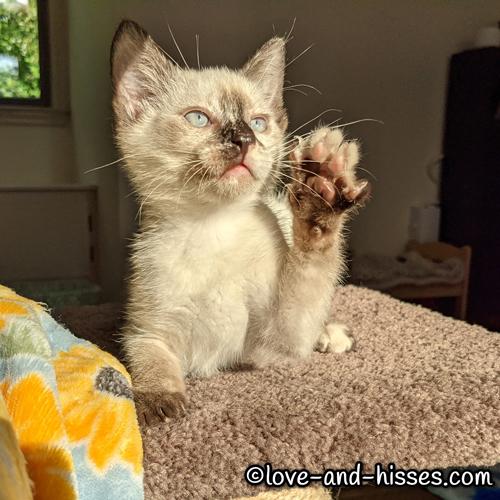 Hannah Hollandaise is all “Whoa, dude…. What’s up with this really bright light?” 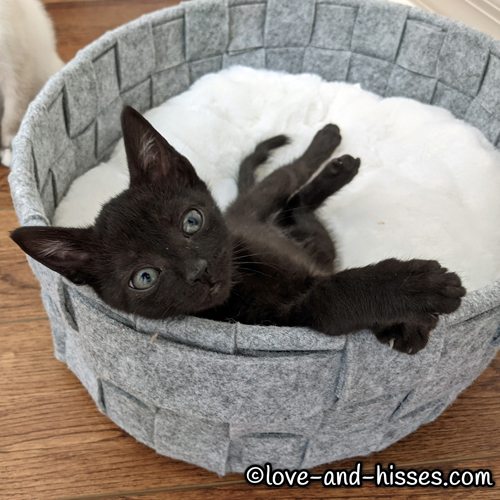