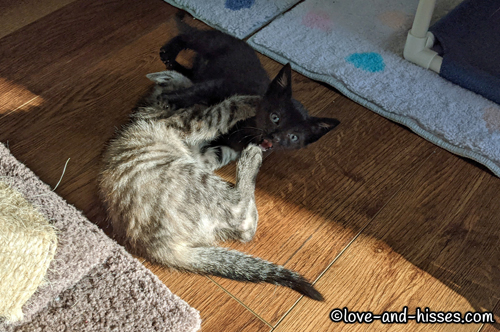 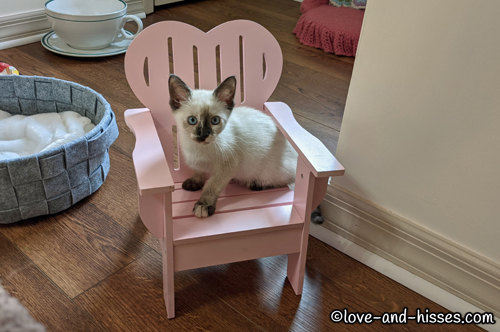 Hannah Hollandaise is all “Whatchoo lookin’ at, lady?” 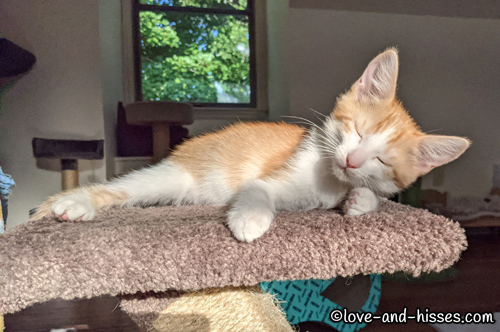 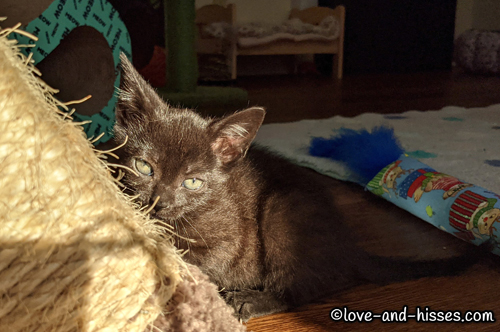 I can’t get a picture of Sofia Soy Sauce that adequately conveys just how soft and plush her fur is. It’s like velvet! 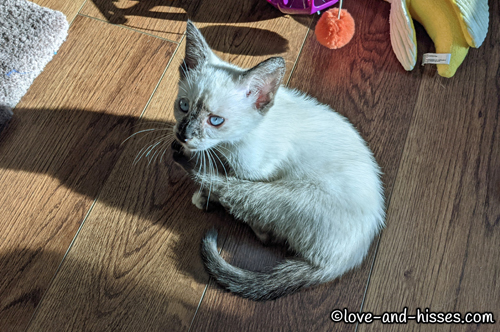 Hannah Hollandaise puts her toes in the air like she just don’t care. 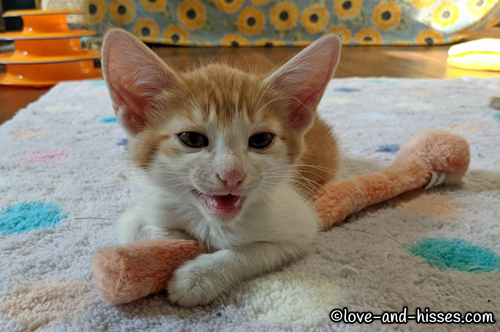 Alfie Alfredo has the long-tailed mouse and he’s raaaather pleased with himself. 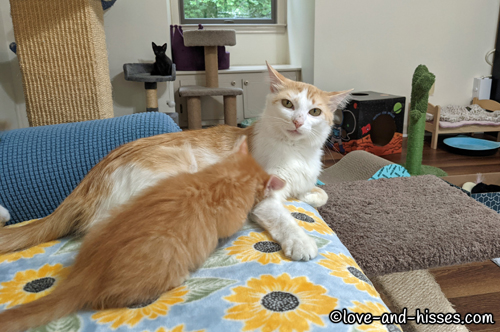 Molly Marinara’s face is killing me. She’s all “LADY. What the frick does this child think he’s doing?!” 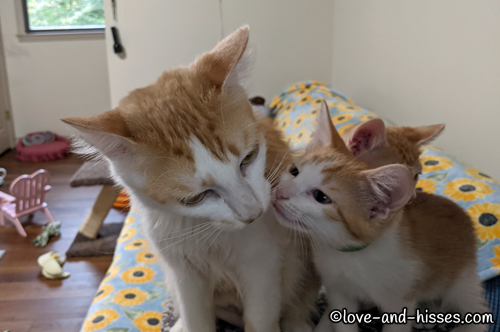 Molly Marinara was yelling about how she was dying of starvation (sure, Molly) so I put her on top of the scratcher to give her a Churu, and then Franco Fondue (and Alfie Alfredo behind him) came sniffing around to see what was going on. (I offered them some Churu, but they weren’t sure what they thought about that.) 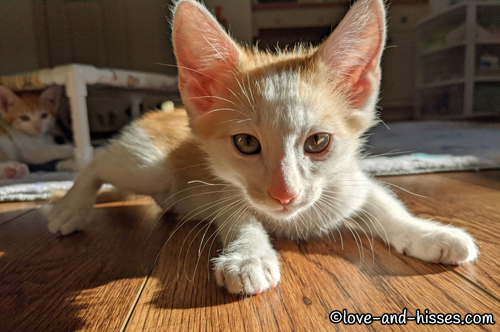 Christopher Chutney in the sun (and Alfie Alfredo in the background.) 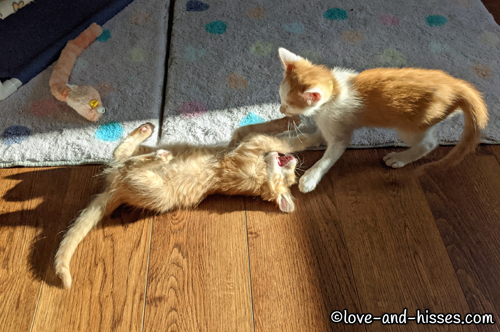 Theo Pesto is all “Bring it on, Christopher Chutney! My feets is little, but they pack a wallop!” 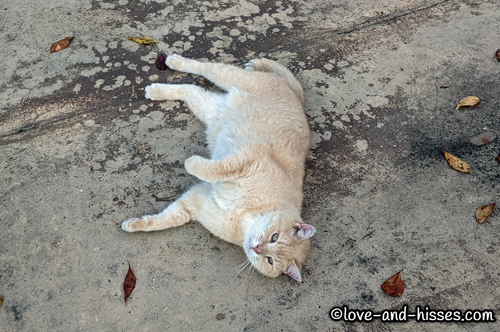 106ºF with the heat index? No PROBLEM. Newt says “How can I get WARMER? Oh, I know, I’ll roll around on the concrete. It’s not warm enough ’til my fur sizzles.” 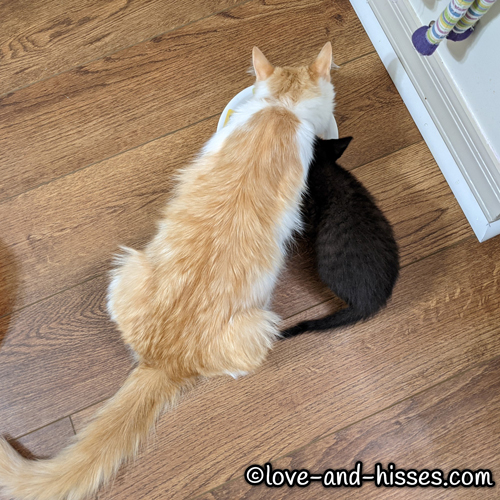 Having finished her own breakfast, Sofia Soy Sauce wanders over to Molly Marinara’s plate to help clean that plate as well. She’s a giver. 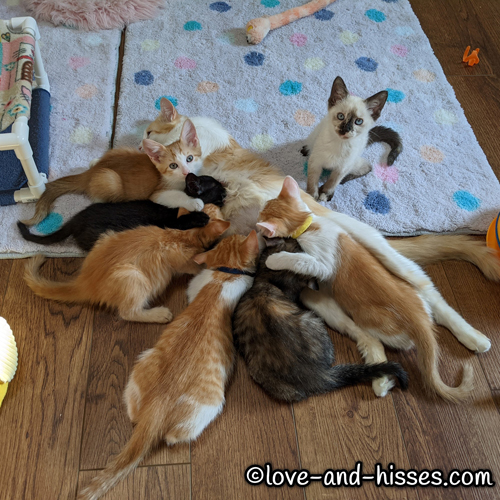 The milk bar is open – and crowded! (Don’t feel too sorry for Hannah Hollandaise, she was more interested in playing and was kind enough to come over and pose so that I could get the entire family in one picture.)⁠

(The kittens do eat on their own and are mostly weaned; however, they will nurse as long as Mama Molly Marinara will allow it. She has places to get away from the kittens if she so wishes, and she’s perfectly capable of getting up and walking away when she wants; she does it often. They want to nurse and she wants them to and they’re all totally unaware that some people on the internet think that kittens nursing at 10 1/2 weeks old is a travesty. 🤷🏻) 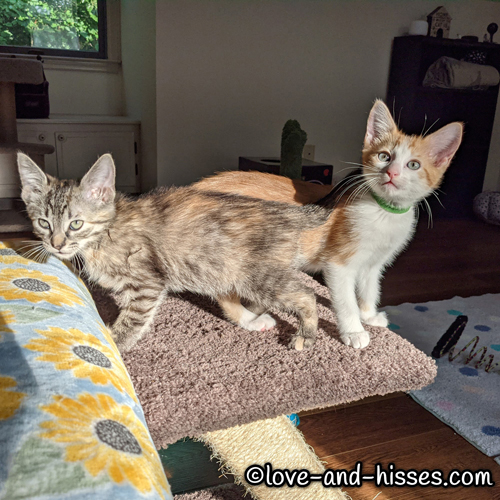 Franco Fondue’s all “Hey guys, what’s going on up here?!” and Tia Teriyaki’s resting suspicious face is on display.

YouTube link
Oh dear, oh dear, Alfie Alfredo is TRAPPED under the Fruittasan! (He can’t have been under there for more than a few minutes – I had just left the room for about 10 minutes and then come back in.)

YouTube link
The kitten think it’s dinner time (it’s not!) and Alfie Alfredo would like you to know that he is, indeed, Da BAYbee. 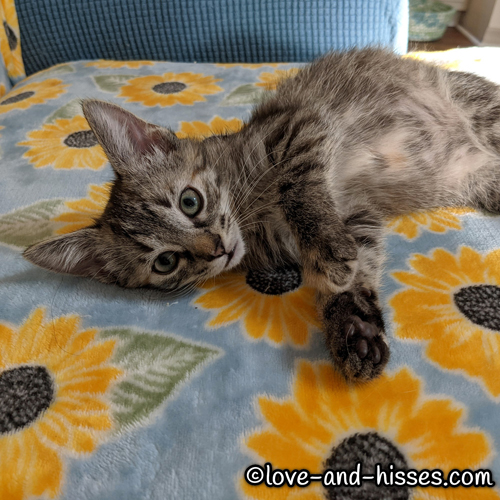