On Saturday, Fred and I went up to Tennessee to Amish country. I have a cabinet in my bathroom where I keep my assorted bathroom crap (I know I’ve put up a picture of it in the past, but I’m too lazy to go look for it). The problem is that I have the tendency to just shove stuff in there because I don’t want to dig through the various organizational baskets I’ve put in there, and then of course I can’t find anything.

I did some looking around online and found this storage etagere at JC Penney. 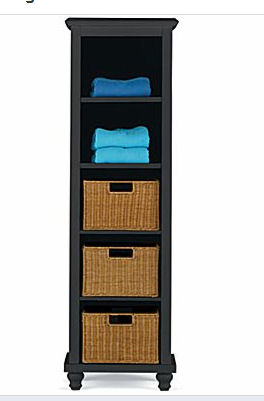 I thought about it and considered it and babbled at Fred about it, and then I came up with a better idea. Why not go up to Amish country and ask the man who built our pantry (still out in the garage, partially stained, waiting for cooler weather before Fred polyurethanes it) how much he’d charge to build something similar? That way I’d have, basically, the same thing – only it’d be a nice, solid version made of real wood and built to stand the tests of time.

We went to Lowe’s and found some baskets to use on the shelves, and then Fred drew up a rough sketch of what we wanted, and what the measurements for each shelf should be.

We got to Amish country late morning, Fred talked to the furniture builder, placed our order, we stopped at a few places for cabbage and cantaloupe and watermelon, and then we headed home. I’m pretty excited about having another solid piece of Amish-built furniture in the house, and I’ve promised that on this one, I’ll do the staining and polyurethaning.

At home, we each grabbed stuff out of the car and headed for the side stoop.

And there we found a mystery comprised of three parts (though it seems that probably two of the parts go together): 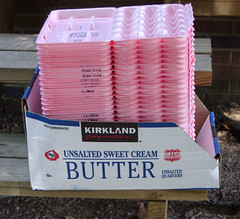 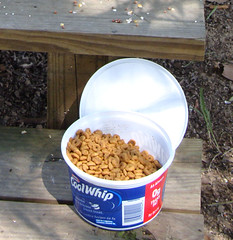 (I haven’t the slightest idea whether the egg cartons and kittens/ kitten food came from the same person. Maybe, maybe not. It’s a mystery!)

The fact that several weeks after our favorite little gray cat died, two little gray kittens have shown up on our side stoop, well, kinda seems like a sign, doesn’t it?

(Fred has a theory on the whole thing.)

They are both boys. They both weigh right around 2 1/2 pounds, so I’m guesstimating their ages at about 9 or 10 weeks. One was friendlier than the other, right off the bat. He’s also got a lot of sass and charisma. The other one took a little time to warm up, but he’s coming around too. Less than two days after we brought them into the house, they both come running over to greet us when we walk into the guest bedroom (where they’re currently staying). They both seemed super healthy at first, but after the first few hours we realized that they both had diarrhea (SIGH), both sneezed a few times, and both have semi-watery eyes. We’re treating the diarrhea and keeping an eye on the sneezing.

I emailed the Challenger’s House shelter manager to see if they could become shelter cats, since we’re willing to foster them. She was perfectly fine with that, but I have to say that given Fred’s behavior in the last few days, those kittens aren’t going anywhere. Fred’s sister expressed some interest in adopting one of them, but I suspect she’d have a fight on her hands if she tried to take one of them.

I could be wrong – but I don’t think I am. I think we’ve got two new kittens.

As far as names, we first talked about giving them good old-fashioned biblical names (I was pushing for Ezekiel and Zebediah – Zeke and Zeb!), but Fred doesn’t seem to care for that idea any more. Then we talked about giving them demon names, but don’t really like any of the ones we’ve seen. Maybe angel names? Right now, we’re calling them “Scabby” (because the little Mister Boogers lookalike has a scab on the back of his neck) and “NonScabby”, and I’d really prefer it if those names didn’t stick.

(Fred wants to name them Lieutenant Dann and Boo Radley. I say they need to at least come from the same ERA. In fact, we should probably just give them both the same name since no doubt we’ll always be mistaking one for the other.) 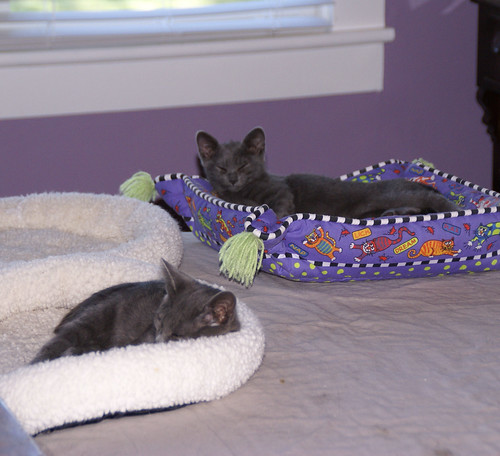 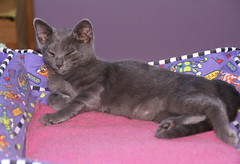 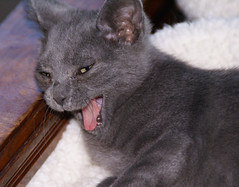 Thanks, you guys, for your concern regarding the True Blood kittens. Still waiting to hear what the next step is, but these kittens are not suffering, believe me. I put drops in the eyes that need it twice a day, and while that’s not particularly any fun, they manage to shake it off and go jump on another kitten or chase a ball or race around like their tails are on fire.

(And when I say I’m putting “drops” in their eyes, the stuff I’m actually using is an ointment meant for severely dry eyes. The vet recommended it, it’s called “Gen-Teal”, it’s a gel and I imagine it works a lot better than trying to put actual drops in their eyes. I can’t imagine how THAT would go!)

I weighed them this weekend, hoping that they’d all gained half a pound in the past week so I could have them spayed and neutered. Not that I’m so desperate to spay and neuter them, but when Terry is neutered, he’ll have his hernia fixed at the same time and I’ve got to confess, his hernia is FREAKIN’ ME OUT, MAN. It doesn’t bother him in the slightest, he’ll let me pick him up and hold him with my palm over his stomach to encourage the hernia to go back from whence it came, but it always slithers back out into a bulge. I guess that hernia’s got places to go and things to do, and staying where it outta be isn’t one of those things it wants to be doing.

(For the record, it just looks and feels like a little bulge of fat sitting there on his tummy. And the vet did look at it and said that it could wait until he was neutered, rather than put him through a separate operation.)

I had a brief time of worry this weekend wherein I decided that all the kittens were deaf – because wouldn’t that be the CAPPER? I am a worrywart, and apparently felt I didn’t have enough to worry about with these guys – but as it turns out, they were just ignoring me. I guess if you baby-talk kittens for long enough, they’re not so impressed by it anymore. 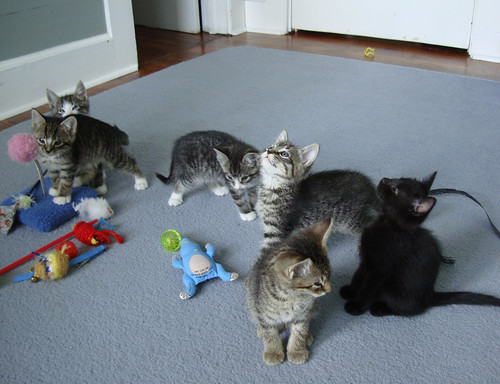 All six in one picture! That rarely happens, as you can imagine. 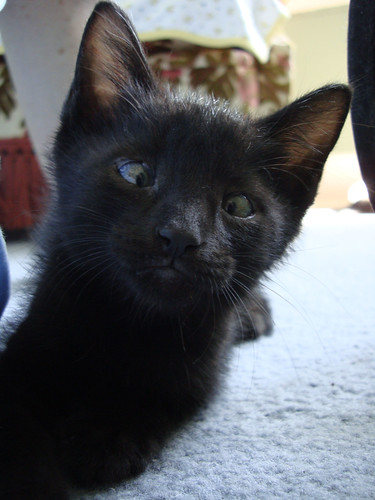 He looks more cross-eyed sometimes and less cross-eyed other times. But at ALL times he is adorable! 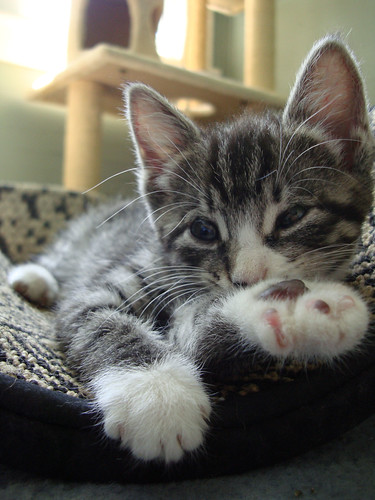 Sookie’s playing hard to get. 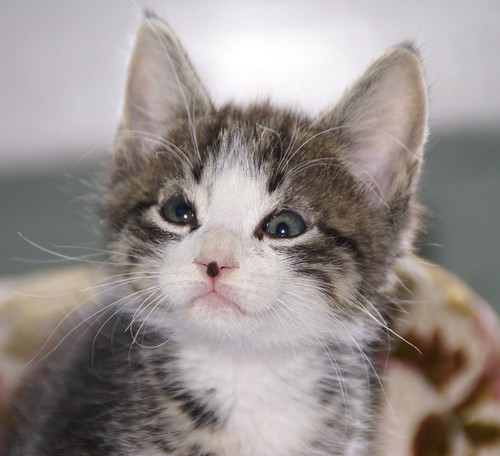 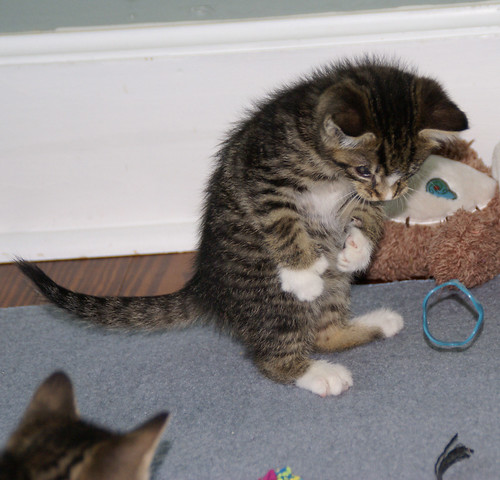 I love how it looks like Terry is scolding the plastic ring (which, you’ll note, is mid-air). He says “Plastic ring, you said you would play with me, and now you’re not playing with me, and that is MEAN! I’m gonna tell my Mommy on you!” 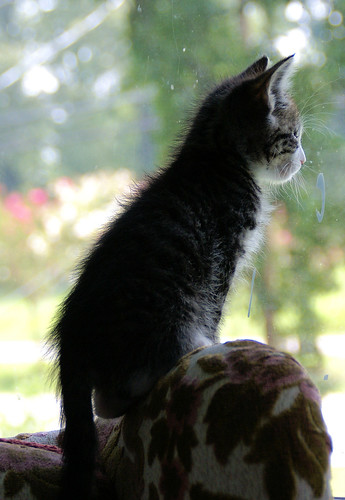 Sam checks out the outside world.