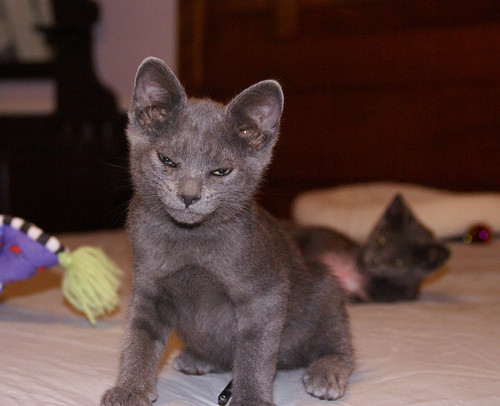 Thanks, you guys, for your name suggestions for the new guys. I really liked Loki and Bart, but Fred did not. I am very enamored of the names Ham and Egg, but Fred is not.

Since they’re really his boys (he really does call them “My boys”, but then I always say “I’m going to hang with my homies” when I’m headed upstairs to hang out with the foster kittens. I’m not sure what my point is here. Maybe that I’m a dork.), I gave him final say on their names (as long as I don’t HATE them – he wanted Remus and Romulus, but I nixed that right quick). I thought we should just give them the same name, or similar names that could have the same nickname, because I cannot tell the two of them apart. 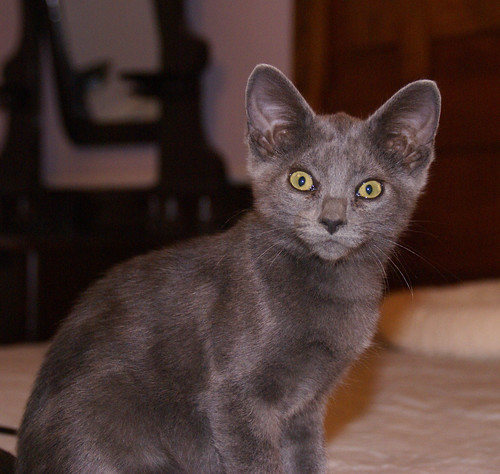 I also really like Bubba and Gump, but Fred doesn’t (odd, since that’s his favorite movie). I suggested George and Lenny (Of Mice and Men), Stu and Larry (The Stand), Fred suggested Javert and Valjean (Les Mis) or Jesus and Judas (heh).

He did suggest Frick and Frack, which I kinda liked.

Lisa suggested Thing 1 and Thing 2 in my comments, which I liked a LOT, but Fred did not.

What I really really REALLY liked and couldn’t convince Fred of, was that Samuel and Jackson would be EXCELLENT names. Sam and Jack! How perfect is that?

But, last night, we found names that we could agree upon, at least for the time being. (It took a long time before Mister Boogers’ name came to be. He started out as “Stanley”, became “The Bean” for a while, turned into Mr. Boogers before he finally became Mister Boogers. I don’t know that the names we’ve given these two will stick, but we’ll see.) 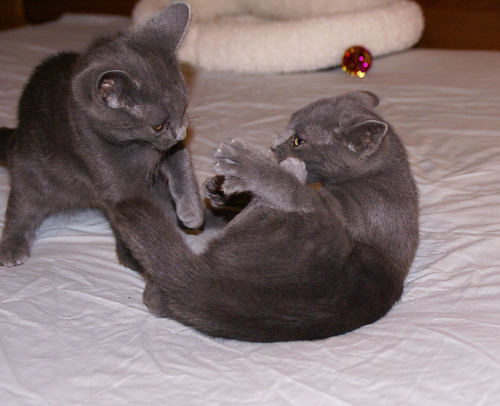 The kittens are doing well. They recognize the sound of me walking down the hall toward the kitten room, and when I open the door all six of them are lined up waiting for me, and begin howling for attention. A couple of them invariably make a run out the door, but I have a fireplace screen across the door (I call it “the airlock” so they don’t get far.

Today marks two weeks since they came here, they’re all very good about using the litter boxes, and the diarrhea appears to be almost completely gone. I very well may begin to allow them the run of the upstairs in the next few days.

Have I mentioned that Sam is a back climber? He’s the only one who consistently climbs up my back, sinking his needle-sharp claws into the skin of my back, and then perches there (as I lean forward so he won’t tumble off). Sometimes he chews on my hair. 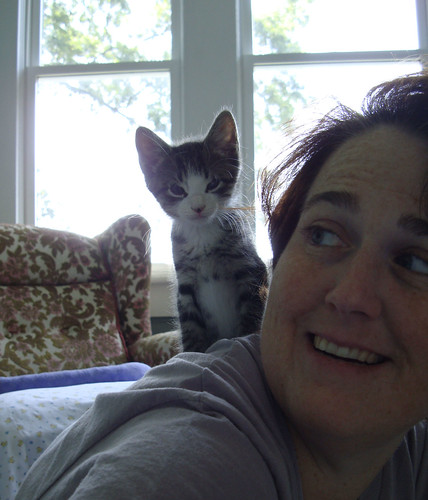 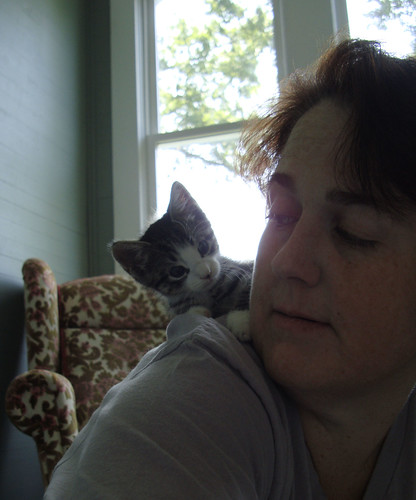 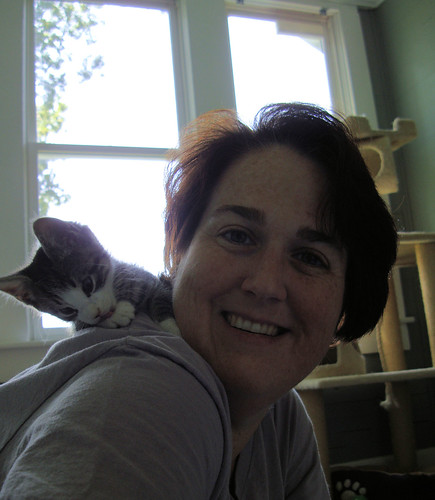 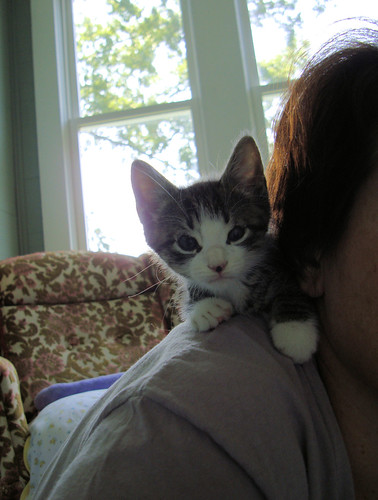 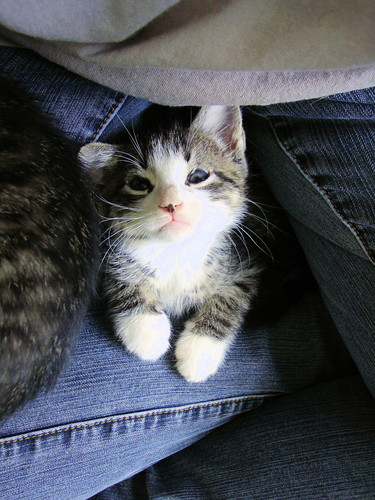 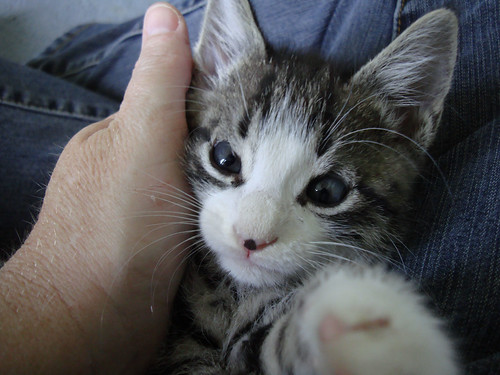 He likes to sit in my lap, too. I guess what I’m saying is that Sam is a people person. 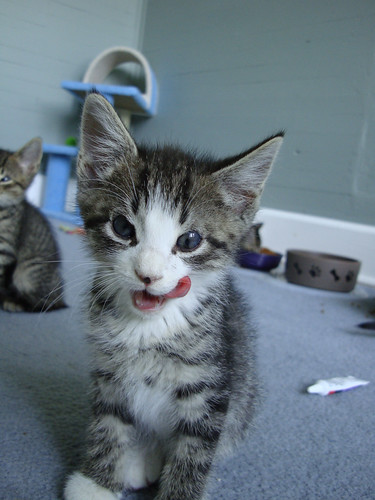 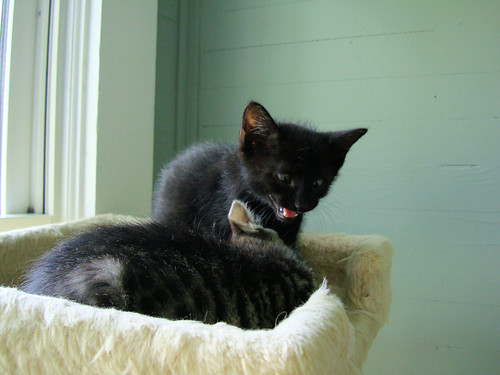 For a few days, Lafayette would get up on top of the cat tree and then cry and cry and cry for me to come rescue him. He figured out how to get down on his own, finally, and now he races up and down that cat tree faster than you’d think a little kitten could move. 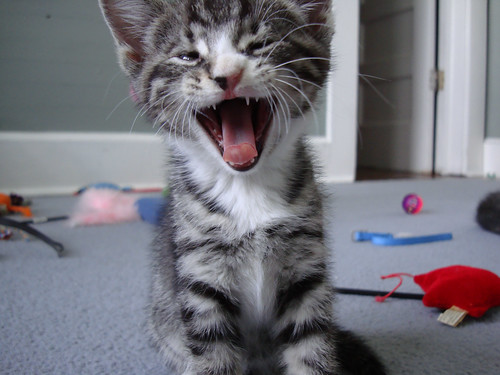