So just in case you missed it, there’s an adoption pending on Sofia Soy Sauce and Theo Pesto (together!) 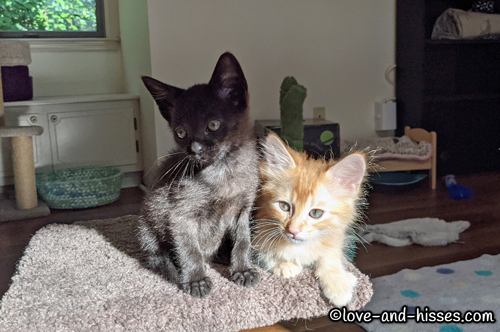 ALSO there’s an adoption pending on Hannah Hollandaise and Tia Teriyaki – together! 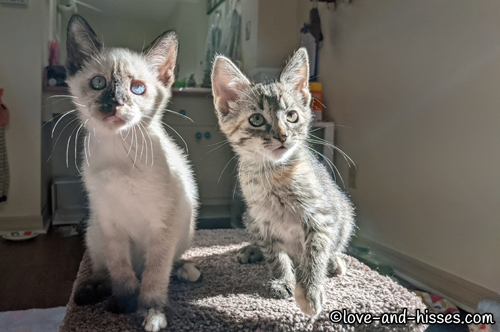 Of course, all the kittens (and Molly) will be with us for a while longer, so we’re definitely not saying goodbye yet. 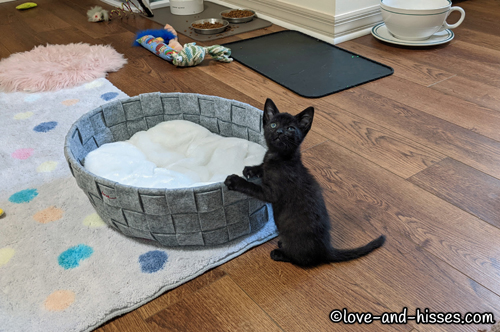 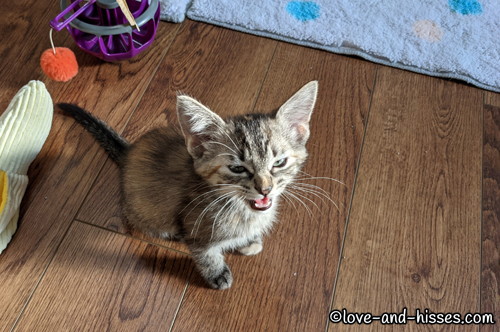 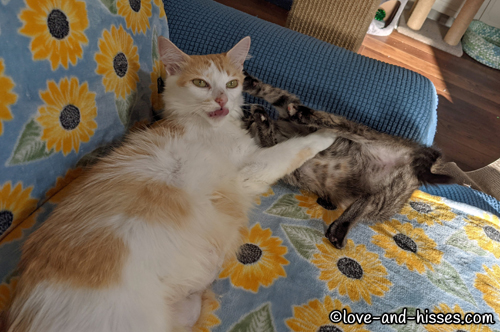 Perhaps she’s complaining about the fact that Molly Marinara pinned her down and gave her a bath. 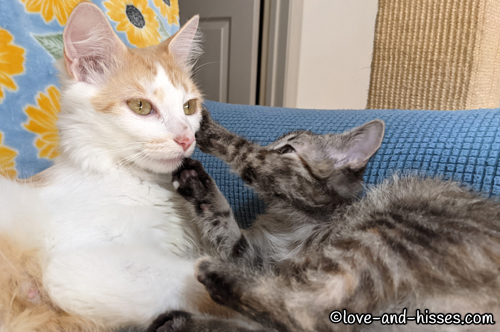 But she loves her mama. 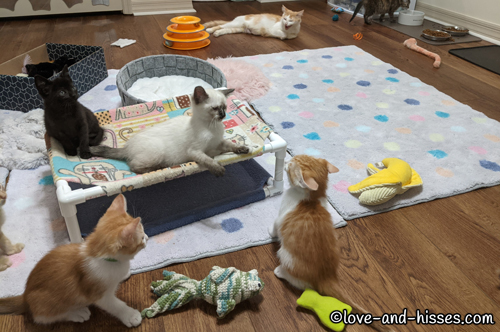 Hannah Hollandaise was minding her own business, and Alfie Alfredo felt the need to give her the ears of I Don’t Like You; I’ll Think of a Reason Later.
“You are very rude,” said Hannah Hollandaise. 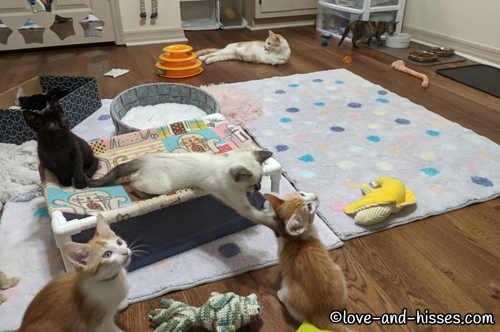 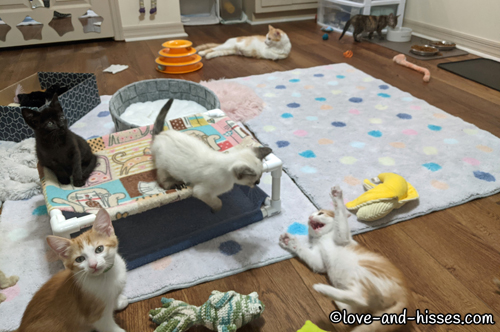 In case you ever wondered who the MOST dramatic kitten in the litter is, there’s Alfie Alfredo, rolling around and hissing like he’s been terribly wounded. 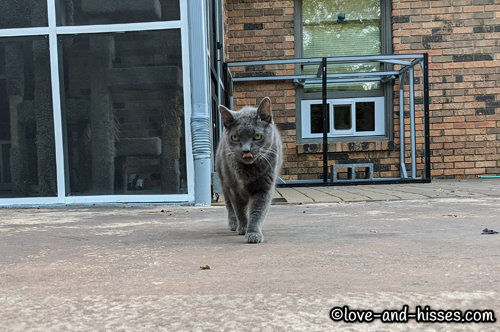 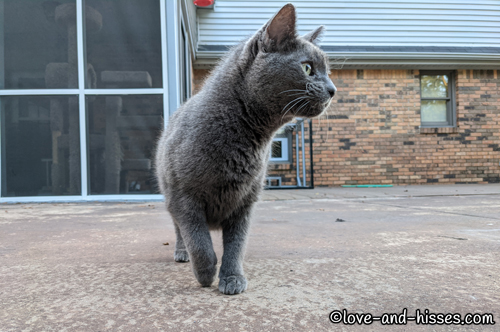 Keepin’ an eye on things. ‘Cause someone’s gotta!

Posted on social media over the weekend. 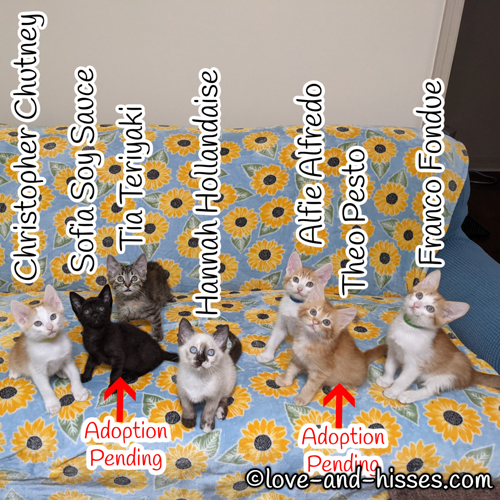 Forgotten Felines of Huntsville is now accepting applications for Molly Marinara (not pictured, because she didn’t want to be involved in this “group picture” nonsense) and her kittens. The kittens are (hopefully) going to be spayed/neutered the first week of September and can go home soon after. (Molly has been spayed and could go home sooner.) ⁠

Note: we are ADOPTION PENDING on Theo Pesto and Sofia Soy Sauce (together), though they won’t go home for several weeks.⁠ (And also on Hannah Hollandaise and Tia Teriyaki, also together.)

All kittens must EITHER be adopted with another kitten OR be joining a home with a playful cat or kitten already in residence. We are located in Huntsville, Alabama and applicants MUST come here to complete the adoption and get their kitten(s). We do not ship kittens even though they fit perfectly in a Large Priority Flat-Rate box with plenty of room left over for toys.⁠ 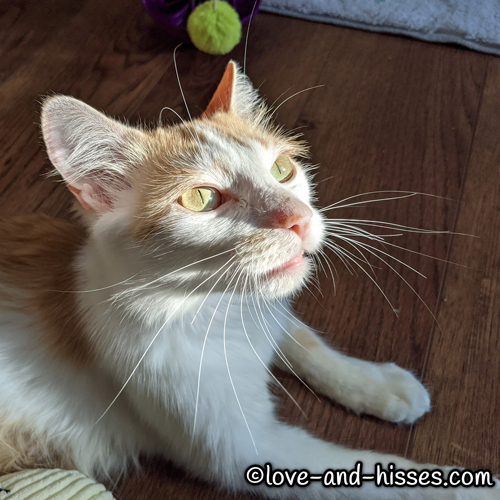 In case you missed it earlier, we’re taking applications for the Dippers – and that includes gorgeous mama Molly Marinara! She’s been spayed and vaccinated and dewormed and brushed and is basically waiting for her people to come along. Her hobbies include eating, cleaning kittens, and staring at me until I give her treats (she’s put on 1 pound since we got her 3 weeks ago, but could put on another pound or so, she’s still on the skinny side.) She’s a very mild-mannered girl, loves to be petted and brushed, and occasionally climbs into the nearest lap for a snuggle. At about 2 years old, she’s ready to put her kitten-raising days behind her and have a chance to be the baby herself (and we think she deserves it). ⁠

If she sounds like your kinda girl, drop an email to Forgotten Felines of Huntsville at info (at) ffhsv.org to inquire. We’re located in Huntsville, Alabama and adopters must come here to complete the adoption. We will not ship or transport cats and our giant slingshot is on the fritz at the moment. 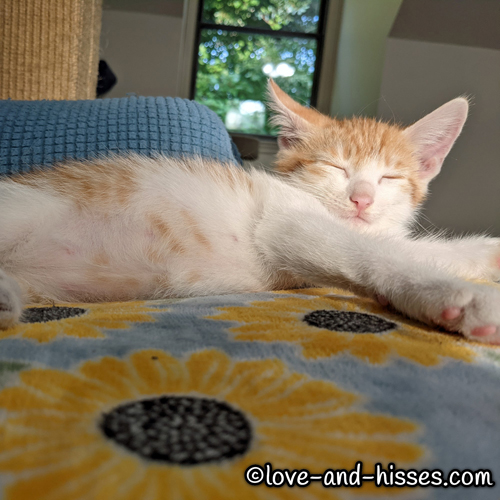 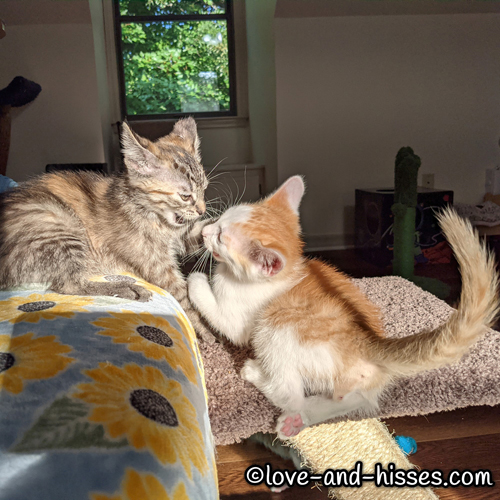 Tia Teriyaki’s all “I AM NOT HAVING YOUR NONSENSE TODAY, CHRISTOPHER CHUTNEY.” 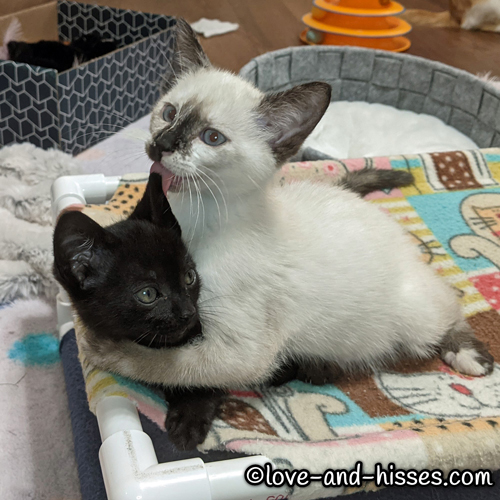 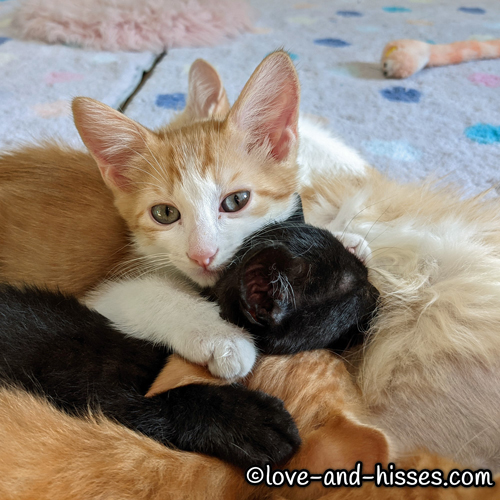 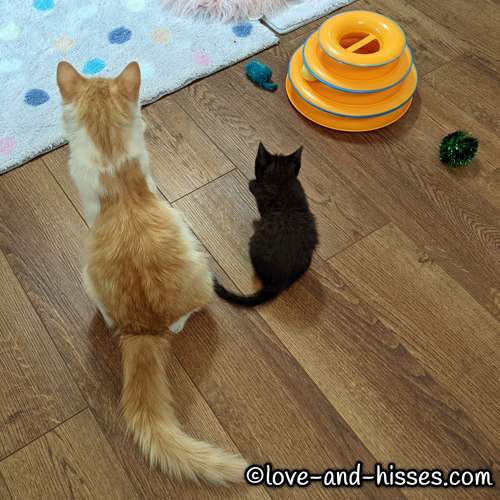 Molly Marinara and Sofia Soy Sauce from behind..

YouTube link
Good morning from the kitten room! They’ve eaten and now some of them are sleepy and the others are racing around like their butts are on fire. As usual! 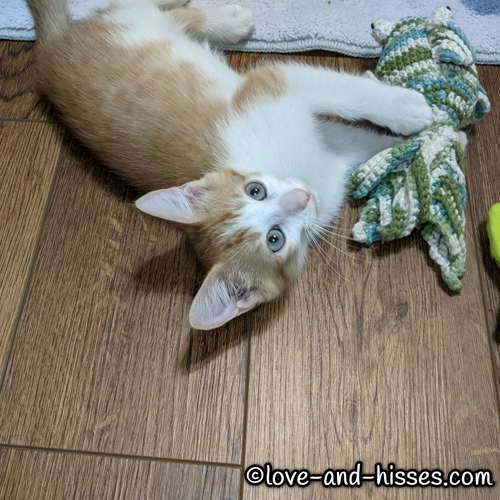 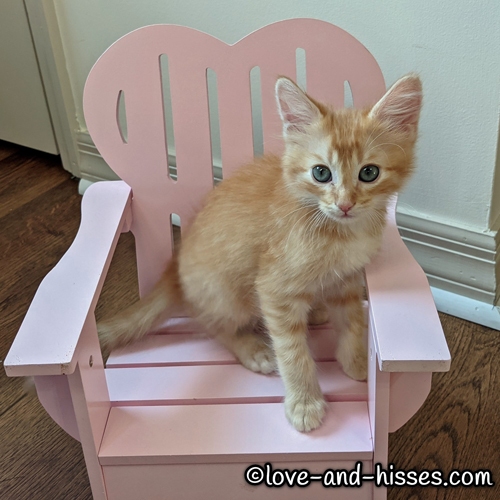 YouTube link
I’m not sure why Christopher Chutney felt the need to floof his tail, but mama Molly Marinara didn’t seem too concerned. 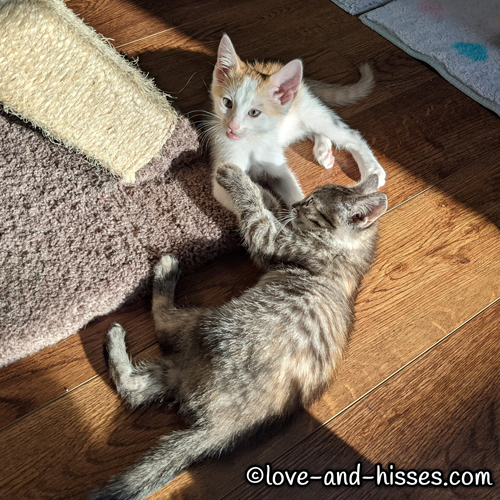 Christopher Chutney’s all “Excuse you lady, I am tussling with Tia Teriyaki. You mind?” 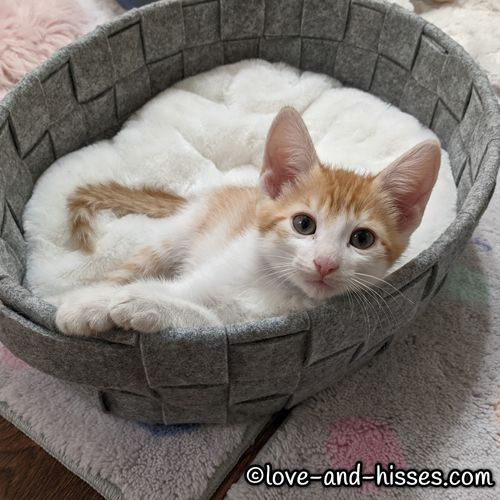