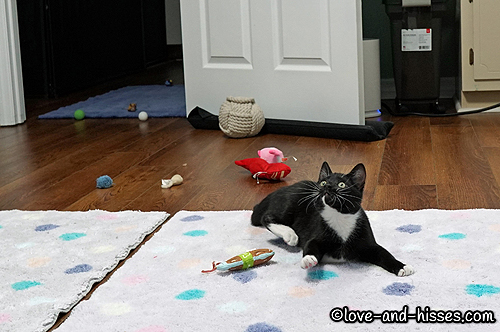 I love how 3 of Nacho’s paws are off the floor (I don’t remember exactly, but I suspect she had just jumped up after a toy and this was her landing.) 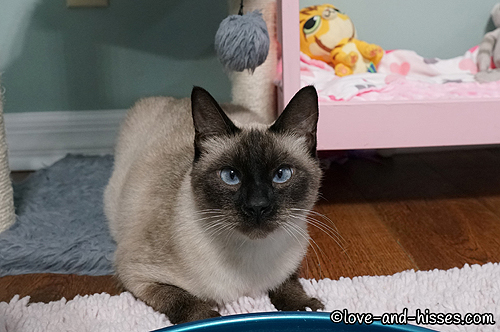 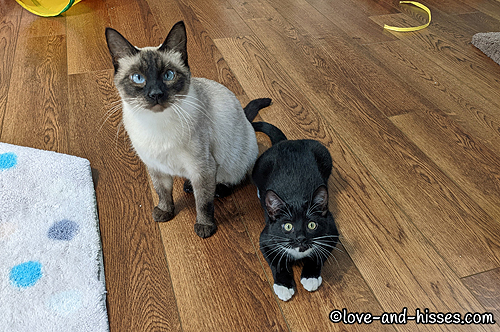 Do you think Kim and Nacho are waiting for me to toss another toy? 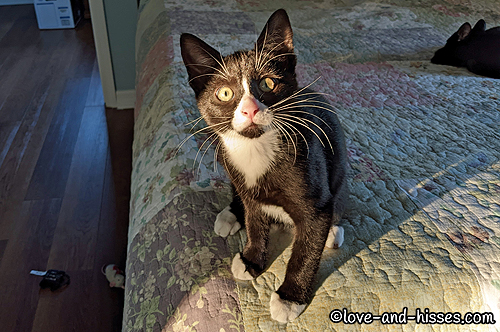 Saul (and his whiskers) in the sun. (Side note: that’s Mike in the background with his ears back. When I first saw this picture, I thought it was him on his back with his back feet in the air and I thought “How have I never noticed how short his legs are?”) 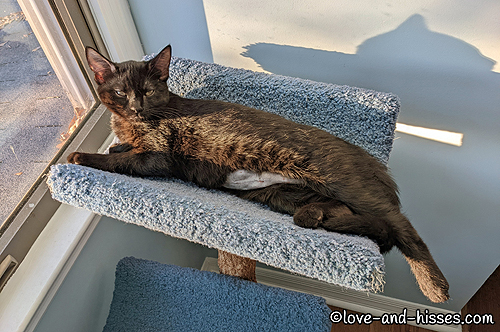 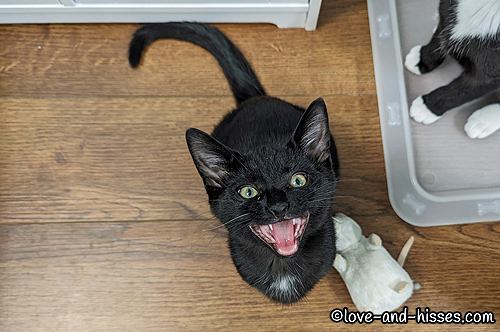 I don’t know. You think maybe it’s time for breakfast? Another side note: I don’t know how I didn’t notice this before now, but Mike has one white whisker. How cute is that? 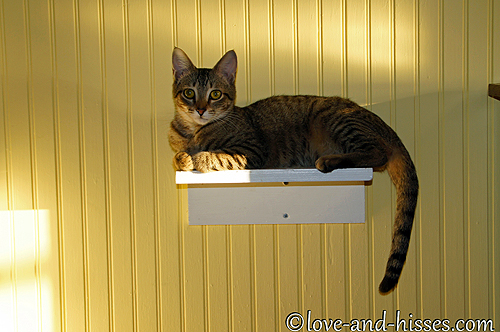 An old picture of Dewey, so y’all don’t forget what a pretty boy he is! I loved those shelves in the kitchen at Crooked Acres.

YouTube link
Mike, Lalo and Nacho are big fans of the packing strap. Y’know, it really doesn’t take much to entertain the little muffinheads. ⁠
⁠
(Video made before Lalo and Gus went home, obviously.) 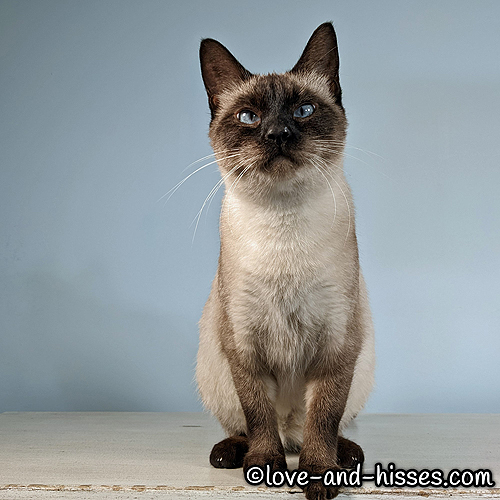 Did you know that this silly, sweet, lovable girl is available for adoption? She is! She was recently diagnosed with Glomerular Disease, which is a kidney disease that will require medication, a special diet, and regular visits to the vet. (We are realistic that it’s hard to get people too excited about adopting a cat with special medical needs, but we hope very much that the right people for her are out there.)⁠
⁠
Kim Wexler – DOB August 1, 2014 – came to us on August 1st along with her 5 kittens (Francesca, Gus, Lalo, Nacho and Saul). She was an owner turn-in at our local animal control facility, and gave birth while with them. Her kittens were only a few days old when they came to us to foster. A few days later, Mike – a kitten who was left behind by his mother – needed a family, and he came to join us. Kim immediately accepted him as her own, and he’s grown up with her own kittens. Kim is pretty sure that since her mothering days are over, it’s time for HER to be the baby!⁠
⁠
Kim is the absolute sweetest, most chill girl with a wide playful streak. She loves snoozing the day away in various spots (she particularly likes to sit and look out the window), and occasionally race through the house, play with toys, and otherwise entertain herself. She loves to be petted – and especially scritched under her chin and behind her ears, and loves to be held for short periods of time. She doesn’t understand when the humans try to kiss her – she thinks it’s weird – but she will tolerate it. She has been spayed, microchipped, and is up to date on her vaccinations.⁠
⁠
We are located in Huntsville, Alabama. Please email Forgotten Felines of Huntsville at info (at) ffhsv.org to inquire about adopting Kim Wexler.⁠

YouTube link
Nearly 3 minutes of jumping kittens. Most of the jumping in this video is Nacho and Francesca, but the boys get a few good jumps in, too!

(Video was shot earlier this week; the girls were spayed on Wednesday, and this is from before that. I don’t have them leaping about with fresh spay incisions, I promise. We’ll give them a few more days to heal before I start tossing toys again! Also, this is obviously before Lalo and Gus went home.) 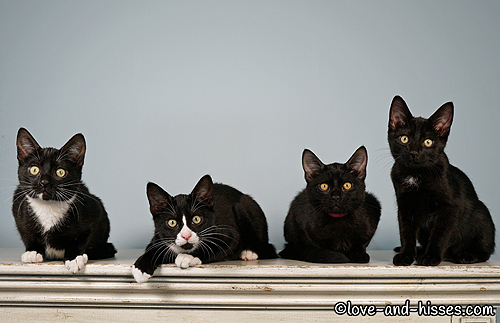 Here they are in pictures from the time I brought them home at just a few days old, until they went home yesterday. Enjoy the purring, and watching them grow. 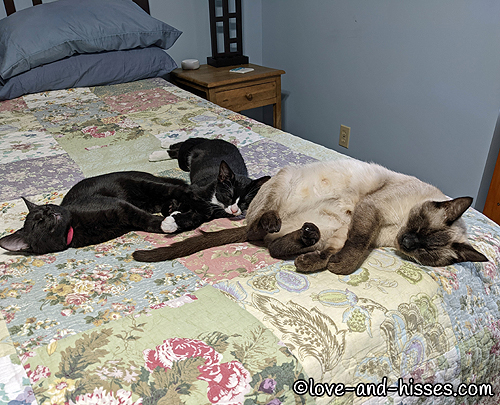 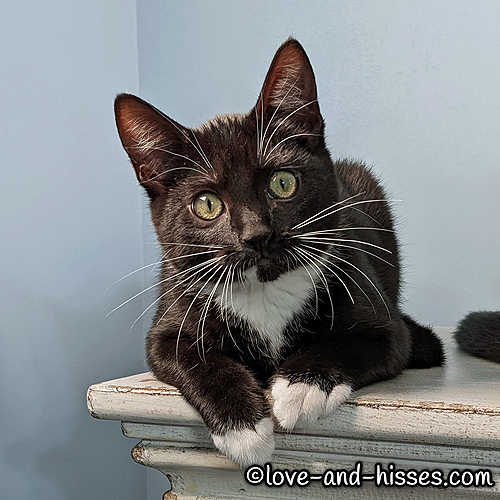 Good morning from Nacho, who just keeps getting prettier every day.⁠ 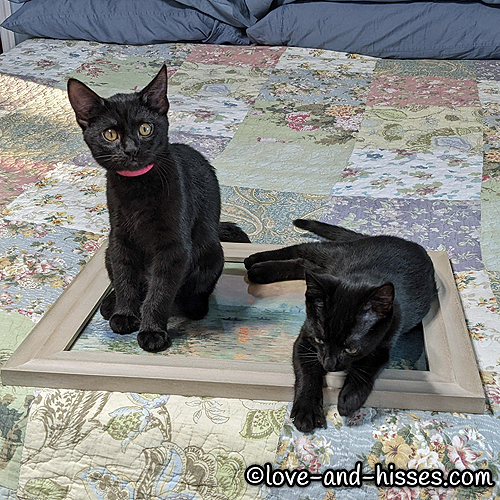 I set this picture on my bed for a moment, and naturally Francesca and Mike volunteered to keep it safe.⁠

YouTube link
Just hanging out in the kitten room, watching them do what they do – and getting some up-close time with Mike. 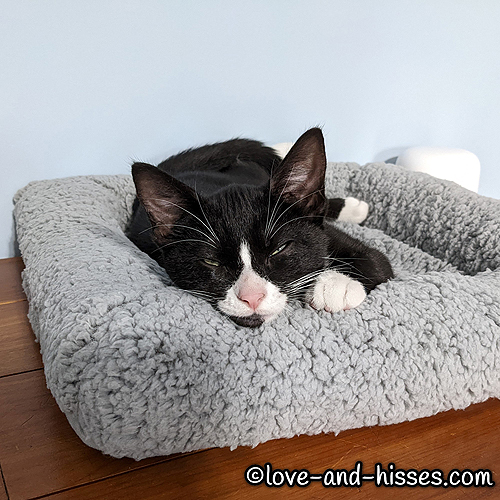 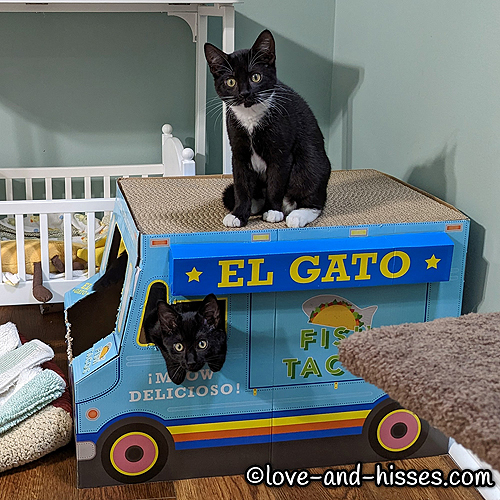 Nacho and Mike are ready to serve your fish tacos. Come visit our taco truck, open all day (or at least for the next 3 minutes, until the staff gets sidetracked and wanders off.)⁠ 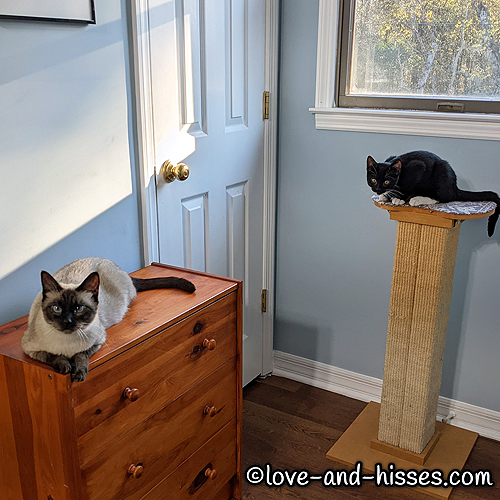 Nacho’s considering making the leap from the scratcher to see if the milk bar is open (it’s rarely open these days.)⁠

YouTube link
Nacho is a big fan of that feather teaser (I mean, the other kittens are too, but Nacho is especially so.) 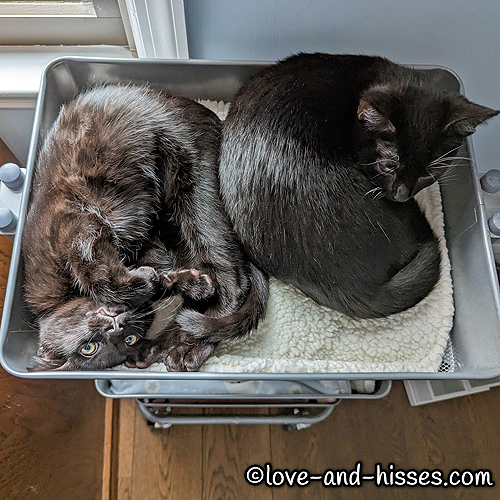