The Forgotten Felines of Huntsville Auction page is having a jewelry auction. It starts tomorrow and goes through next Saturday (November 12th). It’s to benefit one of the foster homes – the Davis family – who is currently caring for a lot of sanctuary cats. 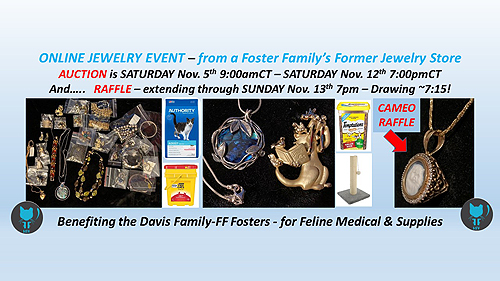 Now listen, I am not a jewelry person, but I can admire some pretty jewelry, and there is some amazing stuff going up in this auction. If YOU are a jewelry person (and even if you aren’t – there are a few non-jewelry items) check it out!

Who are the porch (and subsequent sofa) cat(s) Fred is posting?

Those are two cats who belong to someone in the neighborhood, and who have been hanging out on our porch, and now they think they LIVE there, and Fred is letting one of them inside because that’s how he is. We have no idea what their real names are (or exactly who they belong to, though we have our suspicions), so we’re calling them Trixie and Rocco. 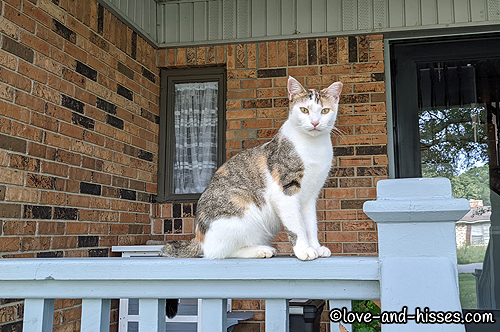 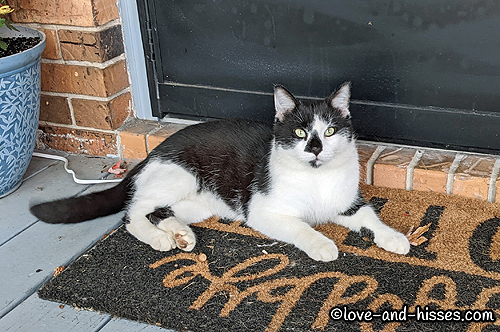 They first showed up late last fall and at first only came around every so often, but I mean – you (FRED) put out food, they’re going to keep coming back. Trixie is a girl, and we had her spayed in the spring (I drove her down to the spay/neuter clinic in Birmingham because at that time they had a program where you could drop off ferals – or “community cats” – without an appointment and have them spayed/neutered.)

Yes, you read that right. If you’d like to clutch your pearls and gasp over the fact that I had the audacity to spay a cat who doesn’t belong to me, who would – I guarantee it – have had kittens on my front porch, I invite you to call our local animal control and ask them just how many unwanted kittens get dumped on them in the course of an average week. (Rocco’s going to be neutered next week.)

They started out as not particularly friendly, and became friendlier – Trixie is the friendlier of the two, and Fred decided we should let her come inside and get to know the permanent residents so that in the winter when it gets really cold, he can bring her inside without worrying there’ll be a kerfuffle. The permanent residents mostly ignore her; she hisses a little at them. (Thus far, Rocco has zero desire to come inside.)

(And let me just point out that there are three heated beds on the front porch now. So there’s not ACTUALLY any need for her to come inside, and did I mention SHE HAS A HOME?)

If you’re a long time reader, you’ll know that this is nearly exactly the same way we ended up with Maxi and Newt. We had them spayed/neutered, they were supposed to belong to a neighbor after that, and they decided they preferred our home. That was in 2007.

I’m not considering Trixie and Rocco permanent residents (THEY HAVE A HOME), but I’m sure they don’t agree with that. 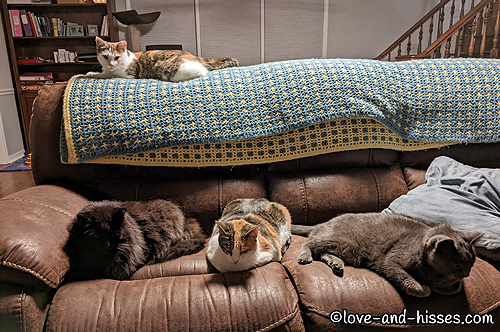 Trixie on the back of the couch; Khal, Alice and Jake on the seat.

Why did you put Mike in a girl costume? It has a tutu. Just curious.

I’m not Robyn, but I have two theories.

1. Cats only care about sex/gender if they want to make kittens. They aren’t even aware of human clothing norms. If they don’t care, why should we? It’s not like we’re not already putting them outside of cat behavior by dressing them.

2. The costume fit and the kitten was willing to wear it long enough to take a picture. You’ll note that Stefan (another neutered male) in the immediately previous picture is wearing a traditionally human female hat. Because he’s stinking cute wearing it. And he didn’t tear it off before Robyn could get a picture.

Here’s the original, from Halloween 2016, complete with caption: “Stefan Ingalls [Little House on the Prairie ref] reporting for butter-churning duty” in his slightly-too-small bonnet. It’s just adorable, is all. Awww, Stefan. He was the BEST.

I put Mike in the tutu because I thought he was the kitten most likely to be okay with having a costume pulled over his head. I wish I’d made a video of the experience, because not only did he NOT care, he kept jumping down off the desk and running off to play while totally ignoring his costume.

But for the most part, I don’t pay attention to whether I put a girl in a boy costume or a boy in a girl costume or what, it mostly depends on what costume I have in my hand, what kitten is nearby, and who I think will put up with wearing a costume long enough for me to take a picture. (You will please note that Kim and Lalo did not want to wear costumes, and I didn’t push it.)

Also, I just remembered this picture, and you can’t deny that Mister Boogers carried off that fancy hat like no other cat could have. Has Mike caught up, size-wise, with the other kittens? I used to be able to immediately pick him out, but he doesn’t seem to be littler anymore.

He is pretty close to their size frame-wise – he’s about as tall and long as they are, but he’s skinnier. I can always tell which kitten is Mike because he’s got that long rat-like snout (don’t look at me like that, I think rats are cute), but sometimes I have to look pretty closely to figure out who’s who in pictures.

In case you missed it on social media yesterday, Gus and Lalo went home yesterday afternoon! Today’s pictures include the rest of the pictures I have that includes them. 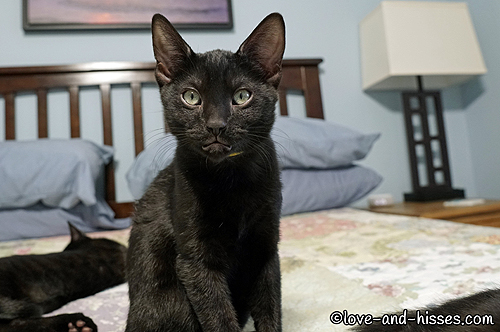 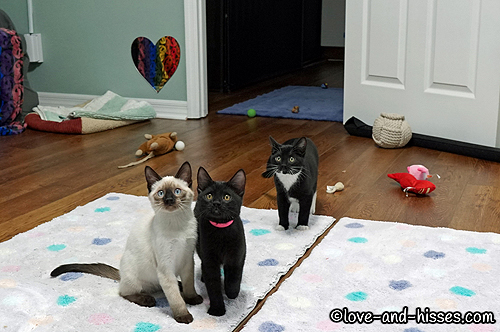 Lalo, Francesca and Nacho know that I’m about to toss a toy. 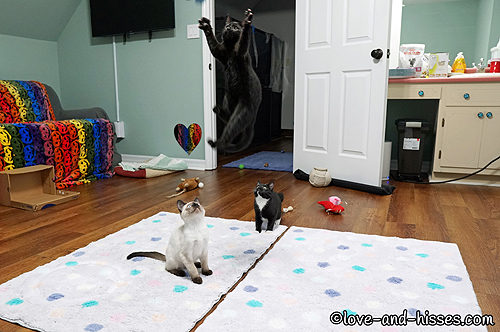 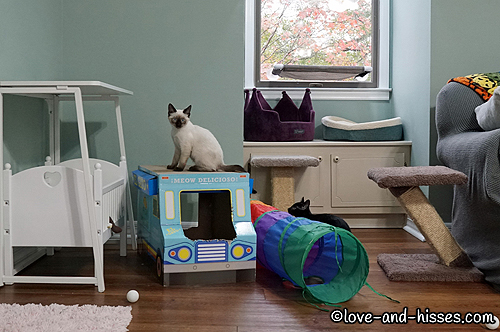 Lalo’s all “I’m gonna miss (chewing on) this taco truck.” 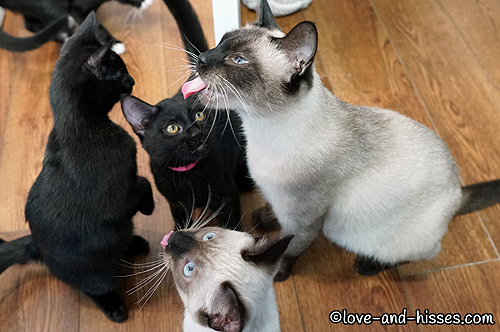 There might have been a little Churu in the vicinity. 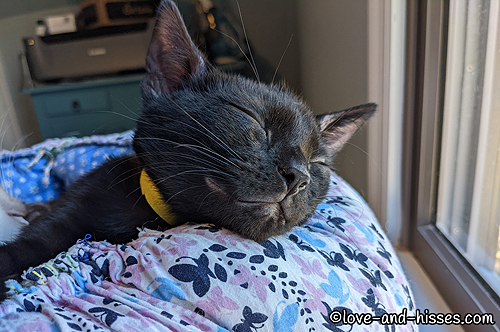 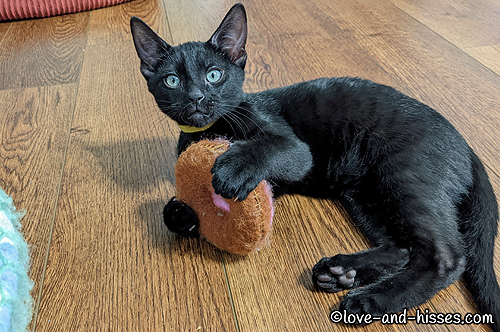 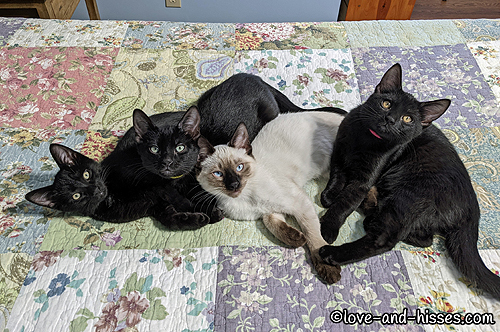 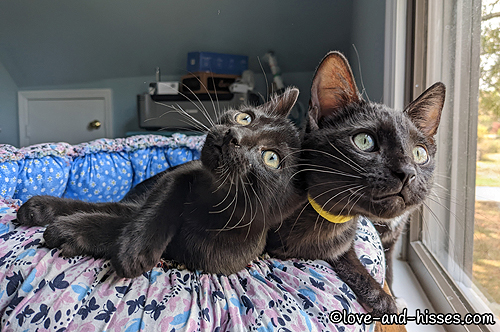 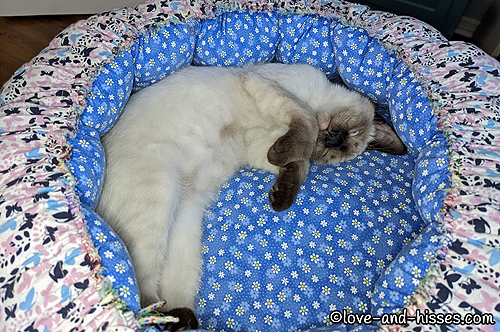 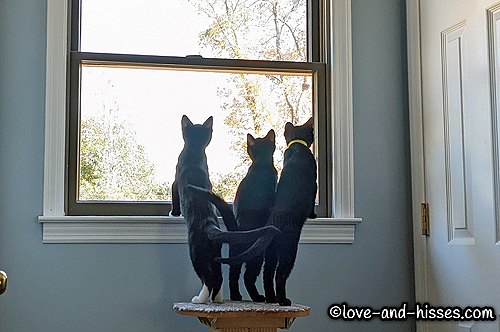 Nacho, Mike and Gus watchin’ bugs out the window.

This leaves Kim, Nacho, Saul, Francesca and Mike still available for adoption. Hopefully their people will come along soon! 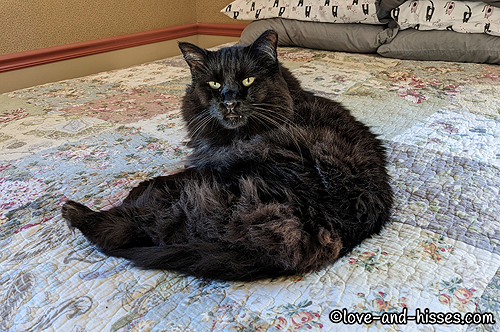 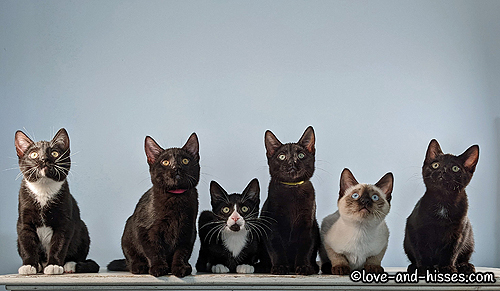 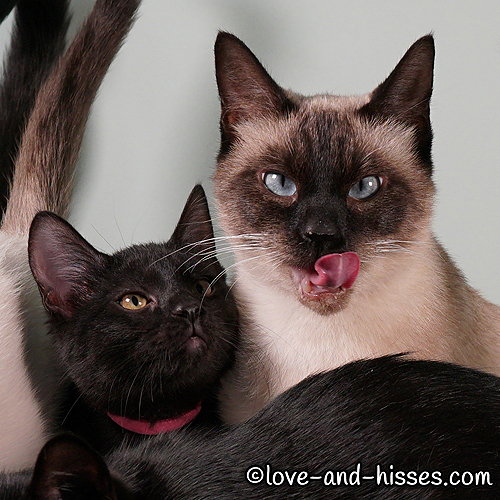 YouTube link
Just hanging out in the kitten room, watching the kittens be the goofballs they are. 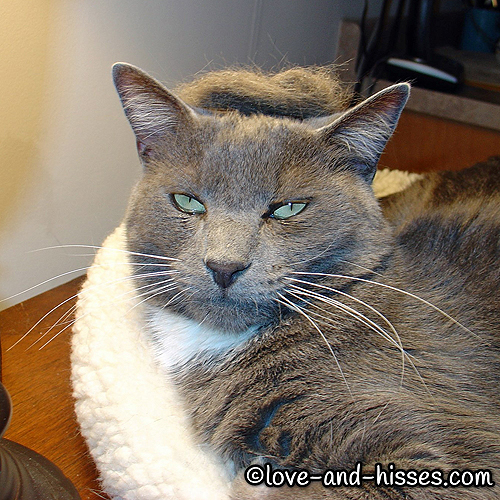 Throw Back Thursday: I mentioned the other day that I didn’t have a tiny toupee for Saul’s Halloween costume, and someone mentioned the idea of using fur brushed off of a cat as a toupee, and then I remembered that I have actually done that exact thing! Here’s (permanent resident) Mister Boogers back in 2004 sporting a fabulous toupee created of his own fur. (He was such a character, that boy.) 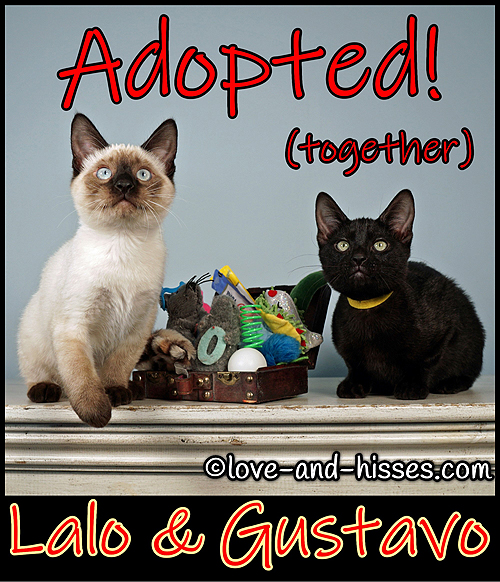 YouTube link
I sure do love watching Mama Kim Wexler play, both by herself and with her kittens. 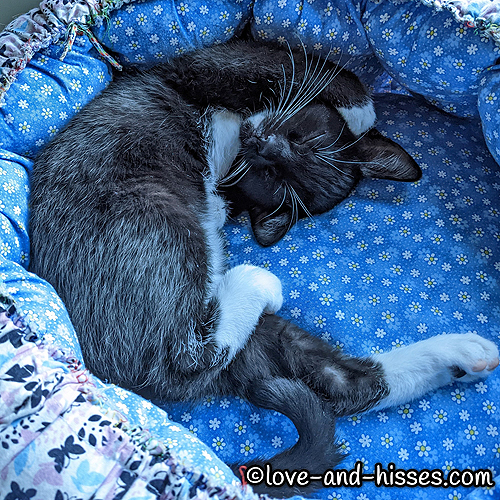