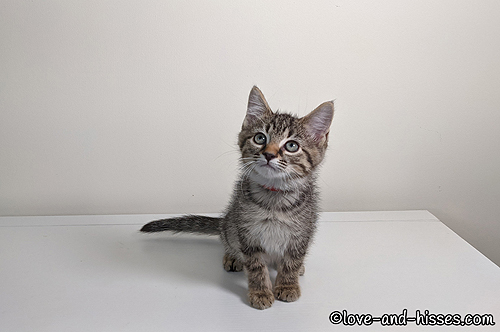 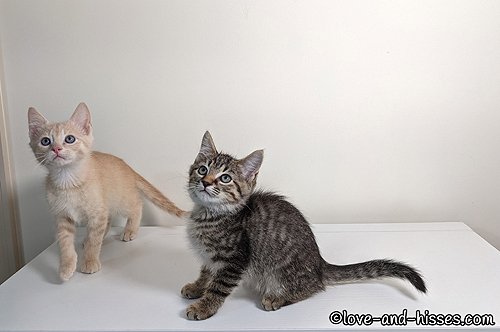 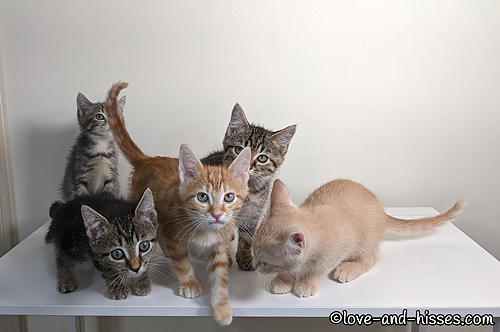 EVERYONE wants to know what’s going on. 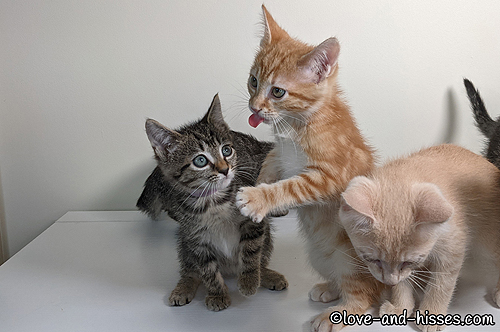 Not sure which I love more: Ozzy’s tongue or Nikki’s “Whoa, that’s a really big tongue!” expression. (Or maybe Sammy checking out the Love & Hisses watermark.) 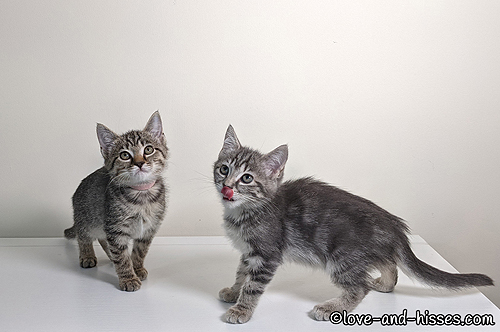 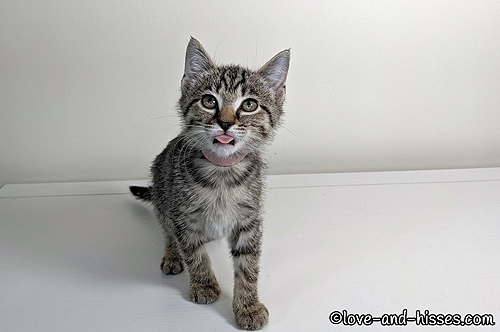 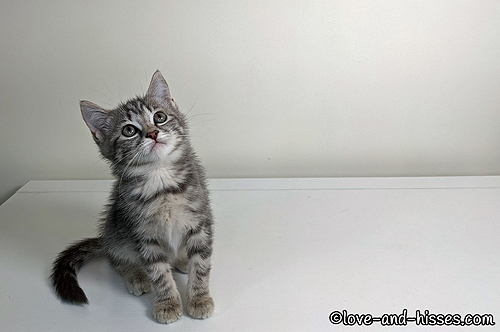 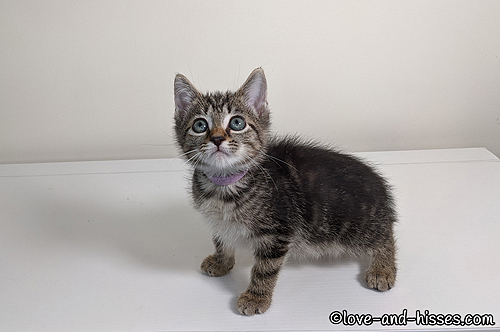 And Nikki’s Precious Moments eyes kill me, too. 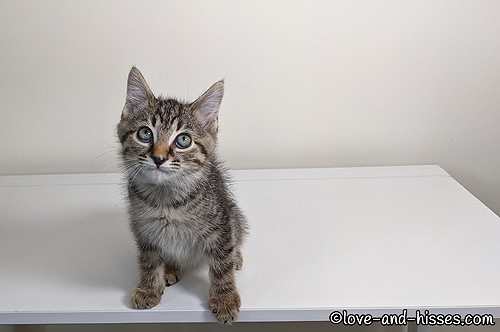 Barry’s all “Gonna GET that feather teaser, lady!” 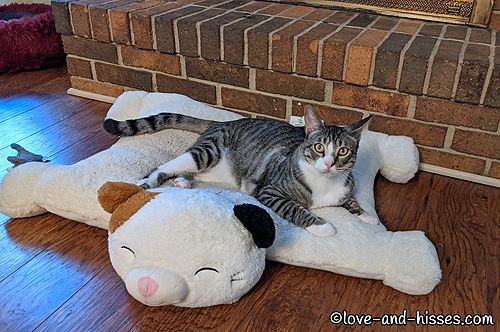 That bed (which is actually a big pillow that I got from Aldi last year) continues to be one of my best impulse purchases. If Charlie’s not on it, Archie is. They love it! 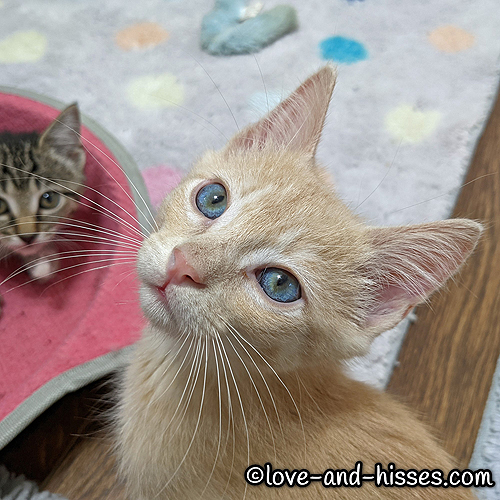 So we thought Sammy Samarium might keep his blue eyes, but it looks like they are ever-so-slowly changing. If they stayed this exact color right here, they’d be pretty awesome… but whatever color they end up, he’s gonna be a gorgeous boy! 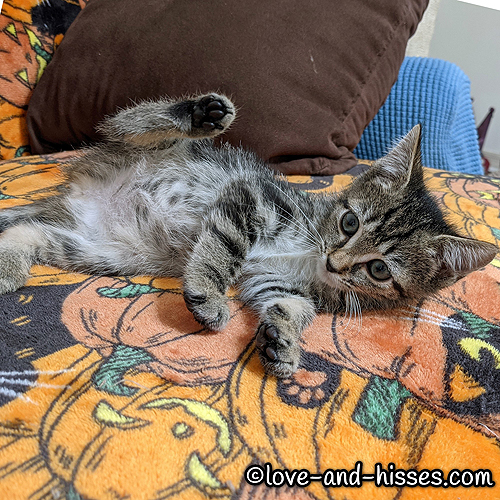 Nikki Nickel invites you to admire her foot, please.

YouTube link
It wasn’t until later that I realized Nikki was gazing in adoration at herself in the mirror through pretty much the entire thing. I mean, who could blame her? SO CUTE. 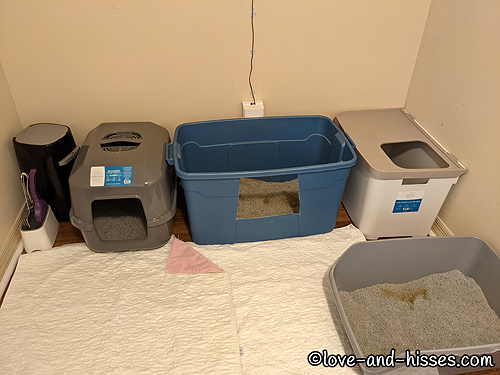 There have been questions about my litter box setup – how many I have, what kind they are, and what I use in them. Right now I have four litter boxes, and it’s really more than I need for 6 kittens but I’d rather give them too many than not enough. (I scoop nearly every time I go into the foster room, which is like 10 times a day – I could probably get by with two litter boxes. But I like to give them options.)

On the right is the So Phresh XL Scatter Shield box (Petco) – I like the high sides; it’s actually the box I use for my own cats.

In the corner on the right is the Exquisicat Top Entry Litter Pan (PetSmart) It’d be good for tall pee-ers, but I wouldn’t use it for my own cats because I don’t think Newt or Jake could use it (they’re getting older).

The blue box is a 31 gallon Rugged Tote storage box, an entry way cut into the front with a jigsaw (and then sanded smooth). (I got it at Lowe’s.)

The box on the left is the Exquisicat Hooded litter pan (PetSmart). I don’t use covered boxes very often, but like I said: I like to give them options. All four boxes get a lot of use; I’d say that the XL Scatter Shield (on the right) gets the most use, but none of them go unused. I use clumping clay litter (Tidy Cats Free & Clean Unscented, which has been hard to come by lately, so I also use Cat’s Pride something or other unscented. I think it’s the one that claims to be Low Tracking, but I have not noticed any lack of litter being tracked all over this house.)

Far left is a Litter Genie (I highly recommend them) and the scoops – my favorite is a heavy duty one called It’s the Scoop, made by K-Kat LLC. I also have a Litter Lifter scoop for smaller pieces, but I rarely use it. On the floor are washable bed pads – I’ve had these for at least 5 or 6 years and they’ve held up extremely well). I usually use the iPrimio Trapper Litter Mats once kittens get really good at using the litter boxes, but just haven’t gotten around to switching them out.

When I dump, clean, and refill the boxes, I use REScue One-Step Disinfectant Cleaner & Deodorizer spray to clean the box before refilling. 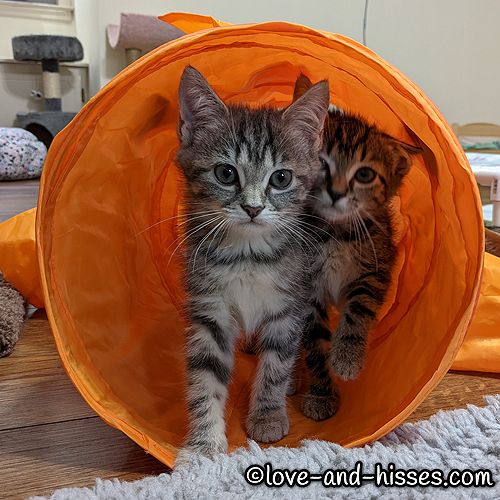 This looks like a movie poster – Carli and Nikki, caught coming through the portal from another dimension… one where KITTENS RULE THE WORLD. (Oh, wait. That’s THIS dimension, isn’t it?) 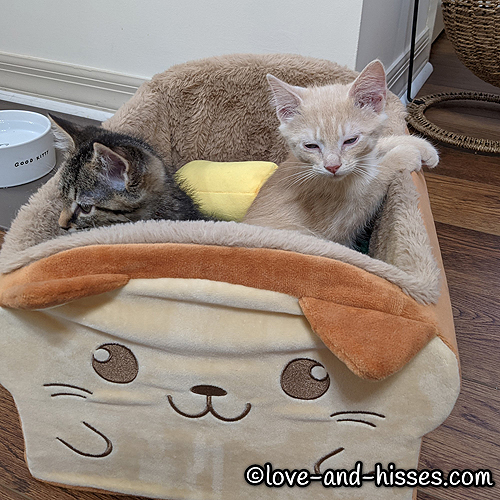