Clover’s reaction to having new fosters in the foster room? Zero reaction at all. I cleaned the foster room the day his siblings went home, and as soon as I closed the door so he couldn’t go in there, he seemed to completely forget that that room even existed. I worried that I might have to stop him from going into the foster room, but that hasn’t been an issue at all. He’s so busy hanging out in the rest of the house, flirting with the permanent residents and eating their food (while they eat his) that I honestly don’t think he’s noticed. 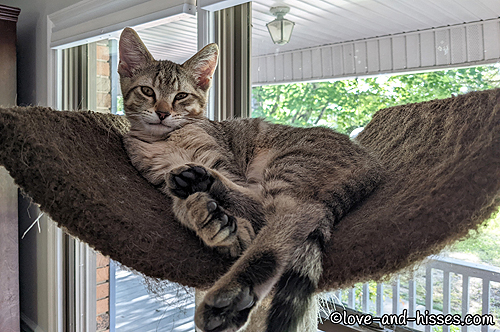 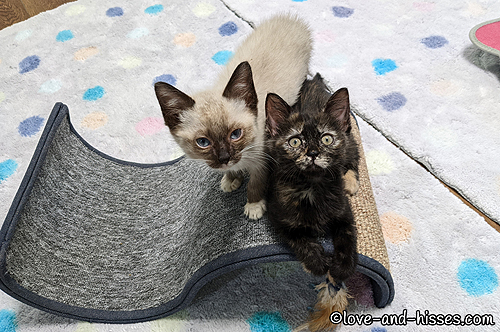 Fergus and Jenny think this scratcher is very cool. 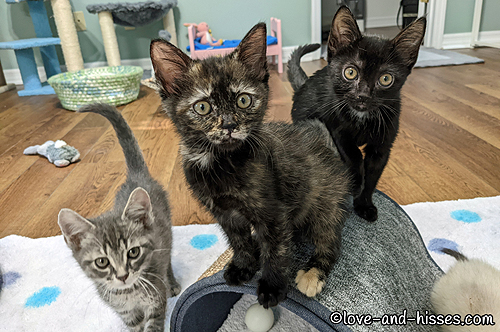 Angus (left), Jenny (front and center), and Lizzie would like to know just what I’m doing. 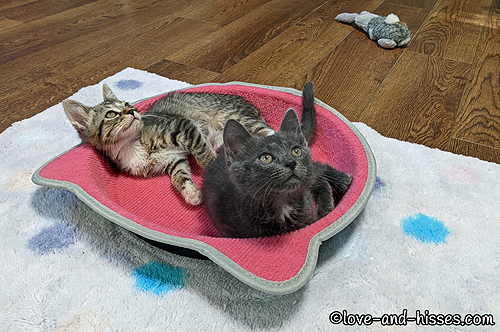 Marsali and Lord John Grey discovered the pie plate and declared it comfy. 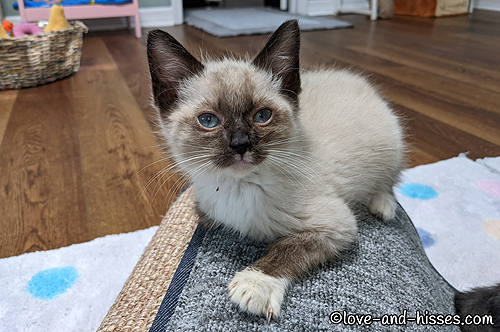 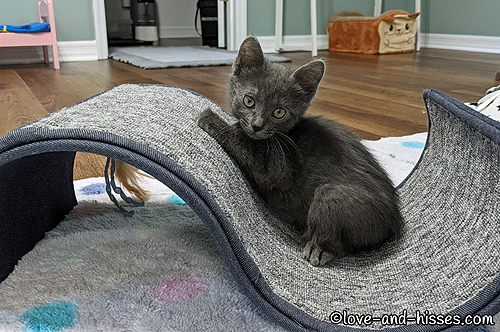 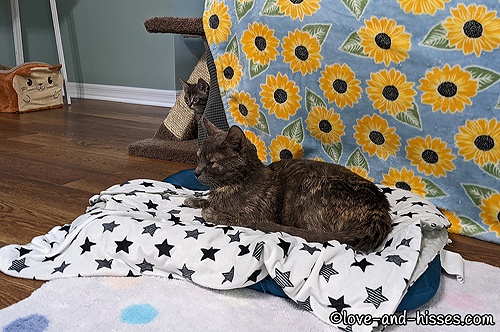 It took Jocasta no time at all to find this bed, and she decided it was the most comfy place to sleep and keep an eye on things. 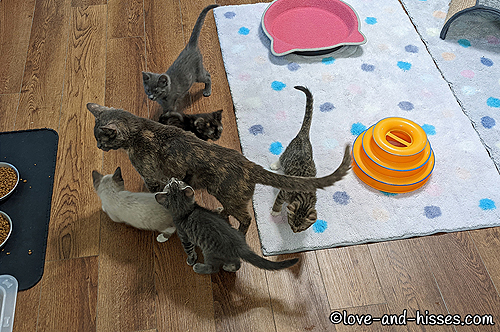 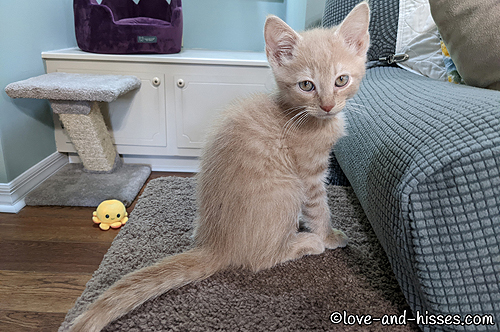 Jamie gives me A Look. 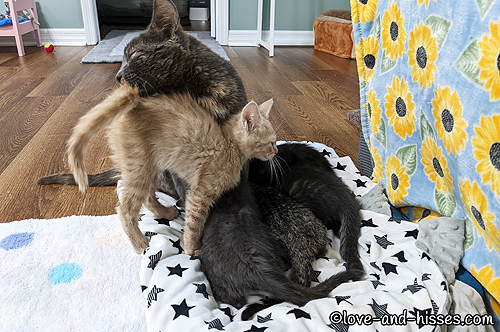 Then he gives his mama a butt to lick. He’s a giver!

I don’t think I mentioned this in yesterday’s post – Jocasta’s kittens are still nursing when she’ll let them, but Lizzie, Ian and Fergus don’t try to nurse at all. They do rub against Jocasta and she’s happy to groom them, but that’s as far as it goes.

Brianna and Roger are still in the bathroom so I can keep a close eye on them (mostly her.) She’s started being interested in food, is eating on her own, and has started putting on weight. I’m still not ready to move her into the foster room, but if she keeps going like she is, I likely will by the weekend. Roger is just fine – whenever I walk into the bathroom he comes bouncing out of the carrier, rubs against me, and purrs like a little motorboat. He looks a mess, but he’s feelin’ fine. 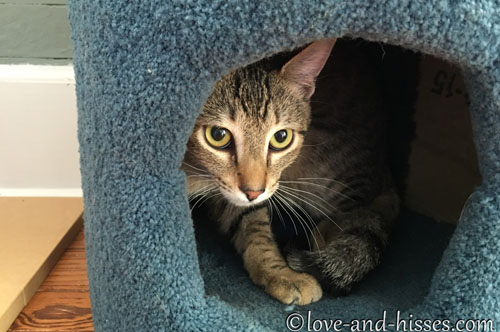 Here’s a shot of Dewey from 2016, so y’all don’t forget what a cutie he is. (Still doesn’t want to have his picture taken, because he is sweet but MEAN.) 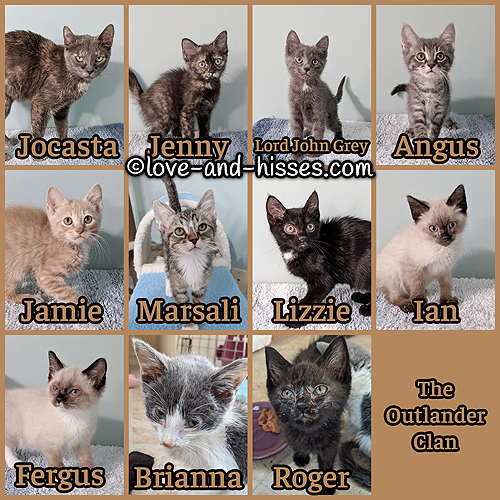 We have new fosters! Meet mama Jocasta, her kittens (Jenny, Lord John Grey, Angus, Jamie & Marsali), her niece (Lizzie) and 4 add-ins Ian, Fergus, Brianne, and Roger! Jocasta’s kittens are about 9 weeks old, Brianna and Lizzie are a bit older (around 10 weeks), and Ian, Fergus and Roger are about 7 1/2 weeks old. And they are VERY friendly!⁠
⁠
They’re named after characters from Outlander (which I haven’t read or watched, but it’s on my to-read/to-watch list!) and I’ll call them The Outlander Clan unless someone out there has a suggestion I like better.⁠
⁠
If you’re familiar with Outlander, you might be asking “Where’s Claire?” Well, it’s a long story, but there is a Claire, she’s unrelated to any of this bunch, and she has been adopted out. We kept on with the naming theme because it’s a good one.⁠ 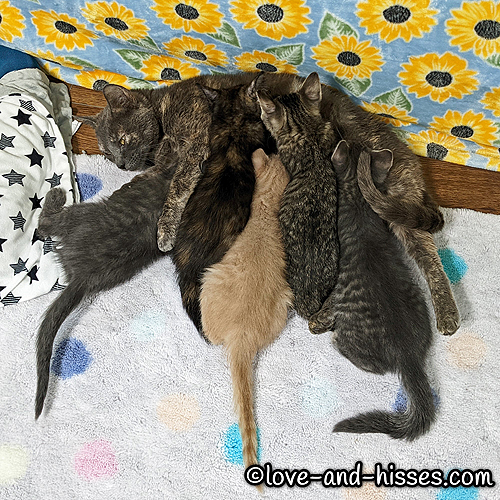 Yes, Jocasta’s kittens are still nursing, though she’s not producing much milk (and she doesn’t let them nurse for long, either.) From left: Lord John Grey, Jenny, Jamie, Marsali & Angus.

YouTube link
Meet our new foster litter: Mama Jocasta, her 5 kittens, her (possible) niece, and some other add-ins! 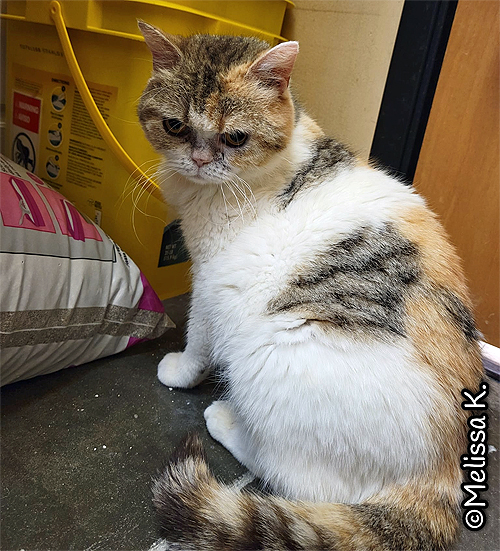 This is Claire, for those of you wondering where she is in our Outlander Clan foster litter. She’s a straight-ear Scottish Fold, which led to the Outlander theme because of the Scotland connection. (Her previous owners got her with the intention of breeding her, but when her ears didn’t fold, they tossed her outside. Eventually she came to Forgotten Felines of Huntsville, where she had 1 single (very large) kitten.)

I was initially going to get Claire, her son Fraser, and Ian, Fergus, Roger and Brianna as my next set of fosters. But Fraser passed away unexpectedly, and Claire was ready to be spayed and adopted. Since the 4 kittens were still coming to me along with a mother cat (who is now Jocasta) and her kittens, we decided to keep going with the Outlander theme.

Claire (the cat) is reportedly not the sharpest tool in the shed, but she’s got a good heart and her sweet disposition attracted an adopter pretty quickly. She was adopted and went home last week!

So that’s where Claire is. 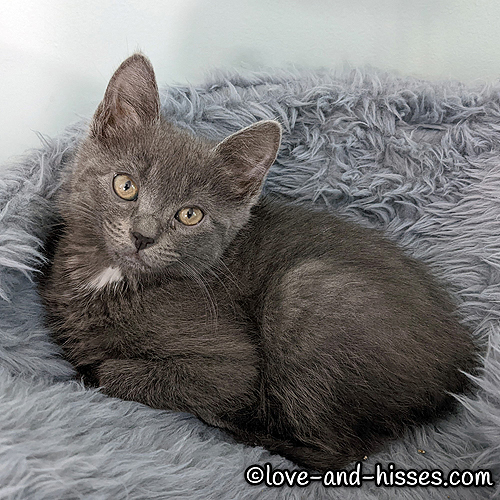 Lord John Grey is a little charmer, is what he is. 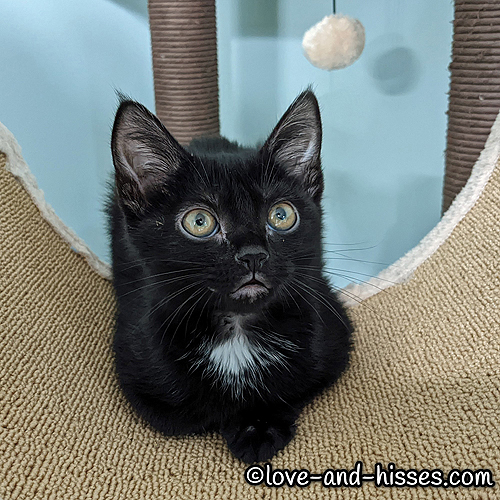 I can’t stand how utterly adorable Lizzie is. A black kitten with a white locket, an instant purr and a husky little meow? It doesn’t get any cuter than that. 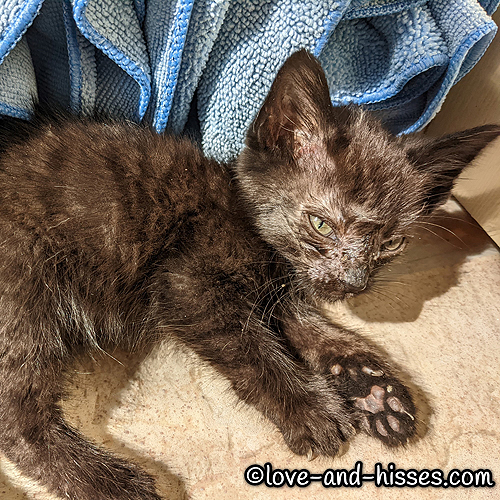 Good night innernets from Roger, who is just a mess but the absolute sweetest little dude ever.