Question for the L&H Community: Our oldest cat, Stella, is a 14.5 years old Angora-mix and has lost too much weight-she is down to 7.5 lbs. from her normal 10+ lb. weight. She recently started hyperthyroid meds, and when the vet retested her the thyroid numbers were good. But, she didn’t gain any weight in the 2-month period between starting to take the meds and the re-weigh. We bought a pet scale and are weighing her weekly, and she has actually lost a few ounces over the past few weeks. We feed our four cats Wellness Core Original dry and canned, and she likes the canned well enough, but isn’t too fond of the dry anymore. I think it may be a tooth issue (she’s prone to tartar), but don’t want to put her under to have them cleaned right now due to her weight loss and her tendency to be very sensitive to any procedure/meds (I’m surprised the hyperthyroid meds haven’t bothered her–knock on wood). So, here’s the question (well, 2): 1) Robyn, what is the name of the stuff you give to older cats to help with nutrition/appetite? 2) For everyone–any suggestions as to what is best to help her “pack on the pounds”? What about kitten food–any suggestions? I know that’s good for pregnant mama cats, so I am thinking of trying it. Any other suggestions? Thank you in advance. Stella is just the sweetest, best cat and it kills me whenever I pick her up and feel how light and bony she has become.

There were several suggestions in the comments – you can see them here – but I wanted to post Lisa’s question in today’s post for anyone who missed it in the comments and wants to chime in.

And the name of the supplement we give older cats is Liqui-Tinic. We get ours at Amazon and always keep it on hand. We first got it from a vet for Spanky, and I am positive that we can thank Liqui-Tinic for helping us get several more good months with him.

(I swear, at some point I’m going to put everything I recommend on one page so y’all can find it easily.)

Am I the only L&H fan that takes it kinda personally when one of “our” kittens is returned??

I always feel personally offended at first, even though I know it’s got NOTHING at all to do with me, and most of the time it’s got NOTHING to do with the cat. I try to just be glad that they (1) remembered that they could return the cat to Challenger’s House, and (2) actually did return the cat to Challenger’s House rather than dump him or her at a shelter, but it’s hard! 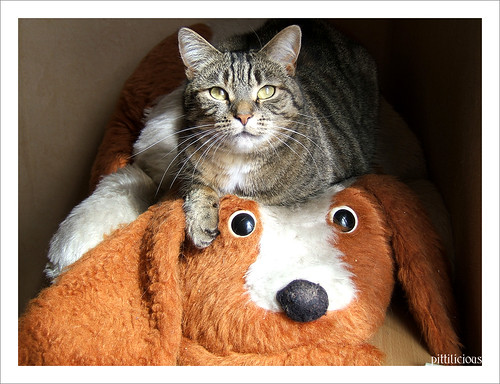 That is WAY too cute! That is one huge nipple being used there.. you have luck with that? No wonder I have problems getting kittens to latch on.

We fed all of the Squash Bugs, Swimmers, and BeeBees with that one nipple last year. Something about it made it the favorite – they would grudgingly use other nipples, but that exact nipple was the one they always preferred. Right up until Badger bit the end off of it and made it unusable!

I’ve gotten a pack of Miracle Nipples since then, since so many other fosterers raved about them, but of course I haven’t had any bottle babies since, so I can’t swear by them.

And as a bonus, here are Calabash and Pattypan nursing from that nipple last year. OH, those wiggly ears!

How’s Archie’s foot doing after its Stefaning? Please pass on skritches to those boys – I’m cat-crushing hard on both, and simply cannot take sides!

Archie’s foot is just fine now. He limped around on three legs for three or four days after the vet drained the abscess, but now he’s back to using all four legs and giving Stefan the Look o’ Hate. Juniper, chilling with her teddies. Privet, snoozing in her condo. “Lady, just pick me up. You know you wanna!” Juniper is such a gorgeous sleek panther girl. “Lady, you need a pedicure but gee, your toes smell terrific!”

Video. Juniper spotted Fred outside, mowing the lawn, and started digging at the window. And then she just kept on digging!