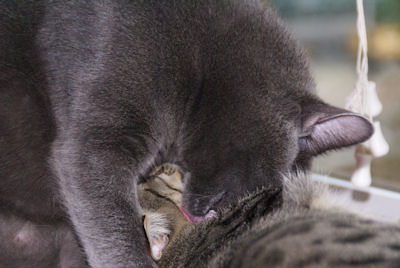 Oh Elwood, you MONSTER, must you lick ALL the Bookworms to death? 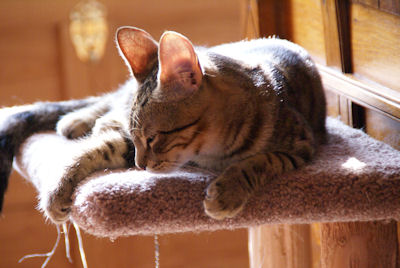 Pretty Corbett in the sun.

This is what I love about Corbett: I give all the cats a snack in the mid-afternoon (Snackin’! Time! was cancelled for a little while because I got tired of dealing with all the mess and confusion. I found that when I moved it back a few hours so that it was NOT centered around our dinnertime, life got a whole lot easier.) The Bookworms get their snack in the guest bedroom because otherwise Jake and Elwood would move in on their snacks and Hoover them up. So the Bookworms know to follow me into the guest bedroom and wait while I divide up their snacks on four plates. Then I put the plates on the floor, and when I leave the room, I shut the door so that none of the big cats can go in there. Then I give the rest of the cats THEIR snack, and I wait about five minutes, then open the guest bedroom door so that the Bookworms can come out.

Every single time, Reacher, Rhyme and Bolitar are clamoring at the door to come out. But Corbett is curled up in a cat bed on the bed. And he always looks at me, surprised, like he’s saying “We can come out? I thought it was night-night time!” Every time. How I have not squeezed the stuffing out of that boy, I do not know. 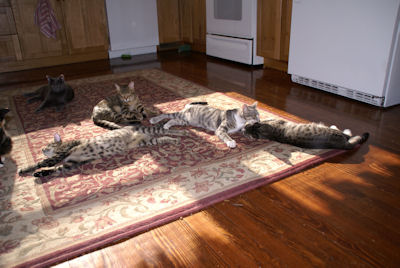 The Bookworms, Jake, and a sliver of Miz Poo over there to the side. 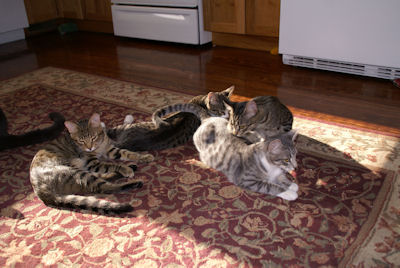 Bookworms in the sun. 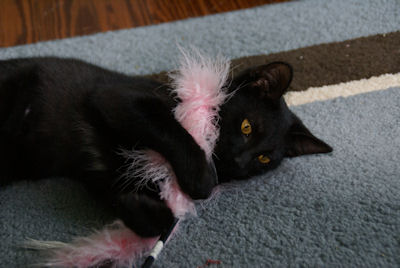 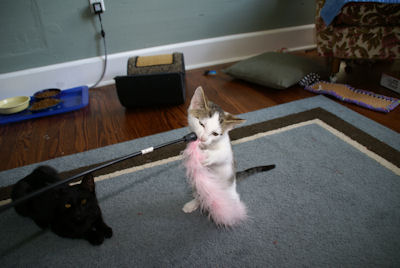 “I find this toy tasty. Two paws up!” 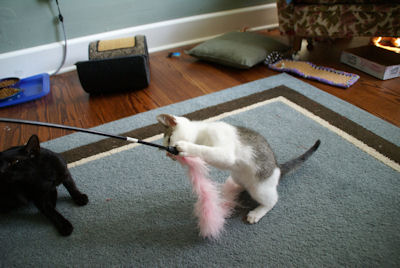 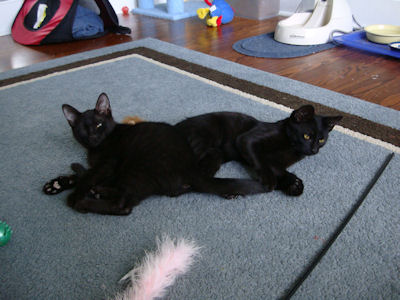 They were laying there playing with each others’ tails. Too cute. 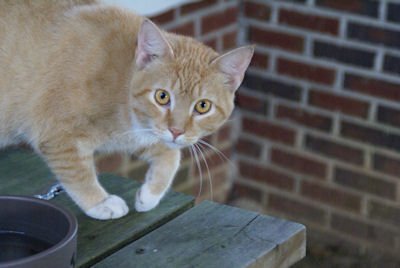 Coltrane, looking guilty. (The sound of the camera was freaking him out.) I generally only see Coltrane at night – Fred goes out to give him a scoop of food, and then he spends the night in the back yard. He’s still there in the morning to greet Fred, and I’m not sure where he spends his days. We’re talking about moving the old chicken coop (the first one Fred ever made, for our initial flock of 12 hens. Oh, how I long for the days when we only had 12 chickens….) into the back yard so that the outside cats will have shelter when the weather turns cold.