Back in January – which feels like it was about 13 years ago – we briefly fostered Natalia. She came to us as possibly pregnant, but very much was not – she’d already been spayed, but had not been microchipped, and as I recall, I felt pretty sure that someone had either dumped her or moved and left her behind.

In any case, she was adopted and only spent 9 days with us. Unfortunately, she was recently returned – she needs a home without a small child. She is currently at Petsmart on University Drive here in Huntsville, Alabama. She’s a sweet lovebug who loves cuddles. The lady who brought her to me in January reported that she gets along great with dogs. At the moment she’s not thrilled with other cats, but I suspect that in a home environment where she’s slowly introduced, she’d be fine.

You can email Forgotten Felines of Huntsville at info (at) ffhsv.org if you’d like to meet her! (I’ll keep y’all updated if/when she gets adopted.)

After I posed the Amber and Phoenix picture last week, warriorinside inquired after Stardust and Deb was kind enough to pass along a picture of her. Stardust is fine, she still is a bit quicker than the rest to run if something startles her, and she absolutely will not stand for claw clipping. She greats me every morning by nudging my arm or hand until I pet her, and she walks underneath my hand and then circles and circles!

That girl knows exactly how good she’s got it! (Thanks, Deb!) Lola keeps an eye on me just in case I think I’m going to get any ideas about grabbing and kissing her. Clyde is a fan of the curvy scratcher. As is Bunny! I don’t think I’ve ever had fosters who didn’t love that thing. They’re also loving the wedge scratcher, as illustrated by Clyde. And Honey! (Note to self: we need pics of Lola and Cutey in that scratcher to make the set complete.) Benjamin chillaxes in the pink Adirondack chair while Lola thlurrrps and waits her turn. The cage has been removed, since once Clyde and Cutey got their 24/7 freedom no one ever went into the cage anymore. I left the heated pad and the snuggle kitty there, and occasionally they hang out there. I didn’t really expect anyone to be able to climb into that llama basket, but all of them have climbed in at one point or another. They love to prove me wrong! 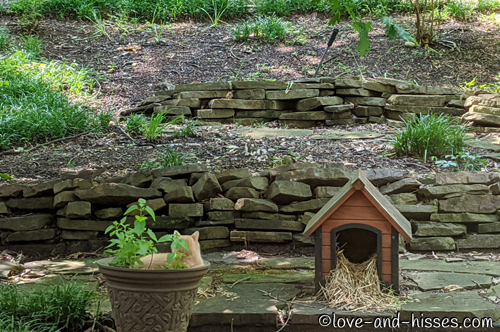 It’s hard to tell from the small version of this picture, but Newt is sitting in the pot of catnip watching a chipmunk and a squirrel play on the wall about halfway up the yard. You can click on the picture to see the larger version, or click here to see the larger version with Newt, the squirrel and the chipmunk pointed out. (Newt did not bother to leave his pot and go after the rodents, because when you’ve got a good snooze going in your pot o’ ‘nip, you don’t want to ruin it by doing activities.