About the kittens who are getting adopted soon, don’t they need to get spayed/neutered beforehand?

They’ve got an appointment to be spayed and neutered in a couple of weeks. Ordinarily they’d need to be done beforehand, but this time was an exception.

Let me tell anyone who is thinking of adopting the mommas that taking on these two kitties would be a challenge but sooo worth it! I have taken in a kitty in just this situation and after some time, she has become my little heart. We snuggle all night long and are very close. It can be so rewarding but it takes patience and time. I thank God that my Lola found me.

I love this so much! I really think that, with enough time and patience, Kristi might turn out to be a lap cat – we’ve gotten to the point where she’ll stretch up to be petted, and in fact Fred got her to take a couple of steps toward him to be petted. I don’t know about Katia, but I also suspect that over time she’ll be a cat who’ll hang out nearby, even if she doesn’t want to be petted (and really, for that matter, she might eventually want to be petted!)

I notice that Katia is willing to roll over and nurse with you in the room. Is that a change?

She’s been doing it for a while – I think she trusts me enough to know that I won’t come over to her and try to pet her when she’s indisposed (and also, I was across the room sitting down, so she knew she could outrun me if she needed to!)

Is it just me or do the grey ones usually seem more loony than the rest?

They do seem to be a bit loonified, don’t they?

Do the Permies still like to hang out in the house in the back yard (the dog one you brought over from CAs)?

I’ve only seen one cat (Dewey) in one of the houses, one time. They seem to have decided that if they want out of the elements, there’s a nice big screened porch with plenty of comfy places to snooze, so that’s where they go. We decided we’re going to clean out the houses and put fresh straw in them. If the cats don’t use them this winter, we’ll rehome them. (The houses, that is. Not the cats!)

I have three foster kittens that were born in my closet on March 11. They will be eight weeks old on Sunday. The girl is super friendly and cuddly (very food motivated, but also loves to just hang out and snuggle), and one of the boys is friendly in an indifferent kind of way, but the other is just downright skittish.

It makes no sense to me because he’s known me literally every day of his life, and he’s been handled plenty. What can I do to gently encourage him to be friendlier and thus help make him more adoptable? I’ve already promised him I won’t eat him…

Have you tried separating him from his siblings for short periods of time and having one-on-one time with him? That’s the only thing that springs to mind – sometimes separating less confident kittens from their more confident cohorts can help to bring them out of their shell.

If you guys have ideas, please chime in!

In my attempts to get a good picture of Deanzilla and Katarina to post on Instagram (etc.) yesterday, I actually ended up with a few of them! Aren’t they just the CUTEST? This really shows off her whiskers.

AND I even managed to get a shot of all four of Katia’s kittens together. It would have been nice if Katia had been in it too, but that didn’t happen, of course. Oksana in the back, Dean in the front left with the crazy eyes, then Katarina and Torvill.

You guys, it was NOT easy to get Deanzilla and Katarina into the carrier. First Ashli had to OPEN the carrier. And then she had to PUT IT ON THE FLOOR. And then we had to wait, like, THREE seconds before Dean went racing in to check it out. Then Katarina was snoozing in the pie plate, so Ashli had to pick her up and put her in the carrier. It was so harrrrrrrd. 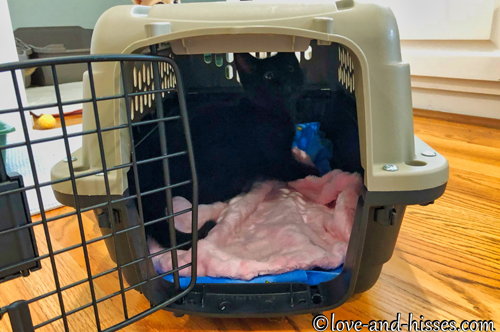 (Actually, I did have to pull Brian Boitano out of the carrier. He wanted to go, too!)

I predicted that they’d be a little subdued, but that their innate nosy social director natures would overcome any trepidation, and a little while later I got a text letting me know that I was right!

The kitten room is slightly quieter, but there are still 8 kittens (and 2 mamas) in there, so it’s not really QUIET, just… less noisy. As far as I can tell, no one has really noticed that there’s anything different in there – although if they did notice, they probably paused for a moment, said “Huh!” and went about running around like crazy things.

Before Deanzilla and Katarina went home, the kittens needed some spiffing up. “I just wants to take a quiet bath. Is that too much to ask for?!” wondered Brian Boitano. Deanzilla took a quick bath, but he had places to GO. Debi, on the other hand, thought a nice long soak was just the ticket. Oksana daydreamed and kept an eye on the ceiling fan. “I am QUITE clean enough, THANK YOU!” declared Picabo. Torvill found that tub quite comfy!

Katarina and a couple of the little ones clearly didn’t think they NEEDED a bath, but that’s okay. We got MOST of ’em clean!

(I am fully aware that I need a little shower cap and towel and backscrubber to make the kitten tub pictures complete. I’m workin’ on it!) 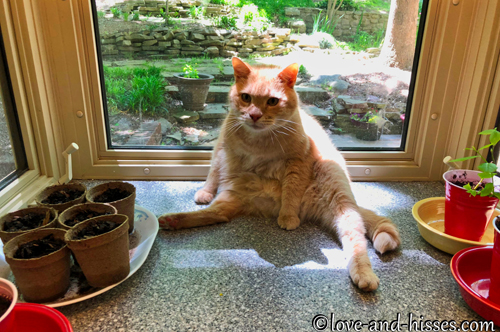 Newt does daily yoga to keep himself limber. Seems to be working pretty well!