There was, I have to admit, far more interest in the fact that Alice and Rufus were eating egg yolks in one of the pictures yesterday than I expected. Basically, some cats like egg yolks and some cat don’t. Alice discovered at some point that she LOVES egg yolks, and now no matter where she is when I’m cracking open an egg, she comes flying into the kitchen and demands her egg yolk. I usually split an egg yolk in two dishes for her and Rufus (who decided that Alice knew a good thing and he wanted in on the action).

Any cat who wants a yolk can have some, but those are the only two who are consistently interested. Occasionally Jake and Elwood will come in and have a slurp or two, but most mornings it’s just Alice and Rufus. I’ve heard rumors that egg yolks will help make their coats shiny, but they’ve had pretty shiny coats all along, so I can’t say for sure.

For those of you who aren’t hip and with it like the rest of us (heh), Dorothy was named after Dorothy Gale from The Wizard of Oz. We were actually calling her “Stormy” for the first day, and then I said “OBVIOUSLY her name needs to be Dorothy!”, and so it is.

Dorothy went to the vet yesterday for her Combo and fecal tests. Her Combo test came back negative (yay!), but she has a few lovely parasites, so will need treatment for those. She only weighed 1.7 pounds on the vet’s scale, so she wasn’t spayed (and I clearly need a better scale!) She was an absolute little angel baby all the way there and home again, just lay there and watched the rain, and looked over at me from time to time. 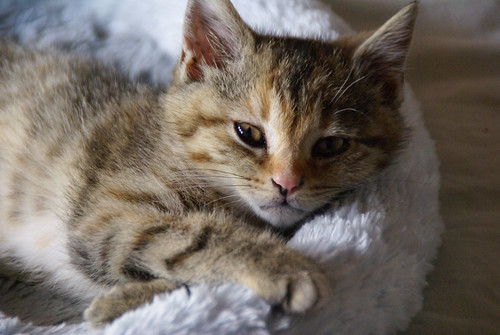 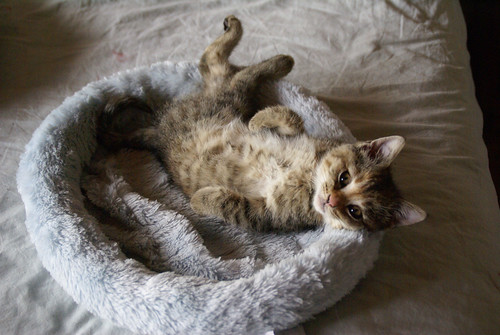 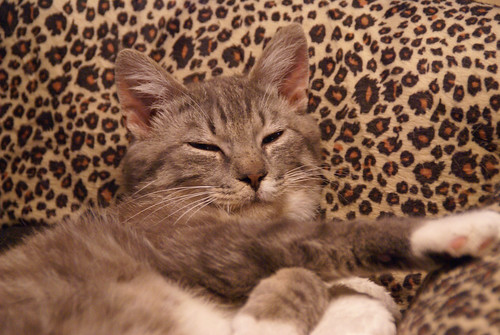 “I was SLEEPIN’, lady. I had a hard night. Of sleepin’. Followed by a hard day. Of sleepin’. You gettin’ the theme here?” (That’s Rufus.)

This video just kills me. It’s Finnegan basically learning to drink water, and the LOOK he gives Maggie at 22 seconds SLAYS ME. I think he might love his mama, is what I think.

The McMaos are doing well. They’re all peeing in the litter box, and I’m seeing more and more poop as the days pass. I’ve seen a few of them trying out the kibble, and last night I offered them some chicken baby food mixed with canned kitten food. Macushla and Declan really liked it – when I wiped some on Declan’s mouth and he licked it off, his tail went straight out, and he got so excited he was shaking. They both ate some, but when I decided they were the only ones who were going to give it a try, I stood up and Fergus Simon RAN over to one of the plates, climbed on, and licked every bit of food off that plate.

Maggie was acting like she was still hungry, so I opened a small packet of tuna in broth (or something like that – it was cat food, but I don’t recall the exact flavor) and put it in a bowl for her. She dove right in, and I left the room. About five minutes later I realized I’d left something in the room, and when I walked back in, Fergus Simon was bellied up to the bowl eating every bit of food Maggie had left behind.

In other words, the eating is going well for the McMaos.

I weighed them on the 1st, and their weights were pretty close. The lightest was Fergus Simon at 1 pound, 1 ounce. The heaviest was Declan, at 1 pound, 2 1/2 ounces. Cillian was 1 pound, 2 ounces, and the remaining three (Macushla, Ciara and Finnegan) were at 1 pound, 1 1/2 ounces.

I’ve actually never had a litter of kittens so close, weight-wise, this is a first for me. They’re right on target and growing like weeds, and it’s a lot of fun to watch. 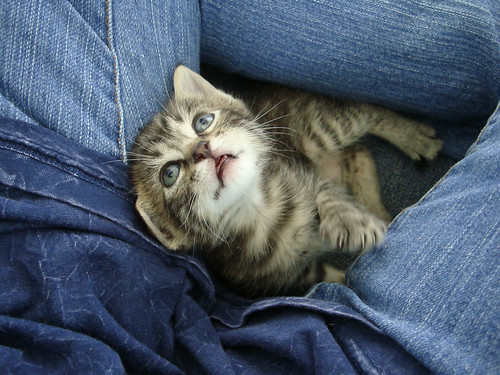 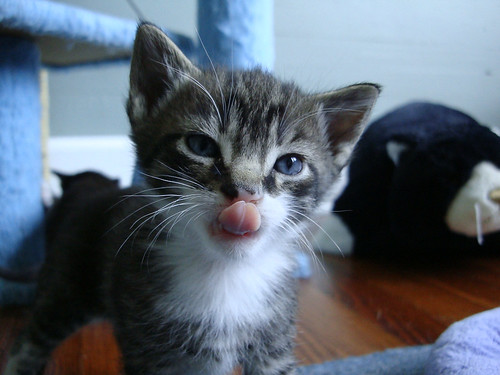 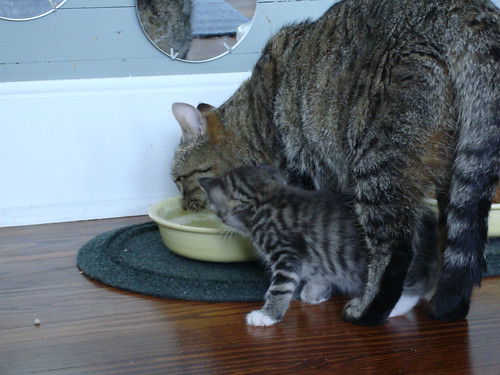 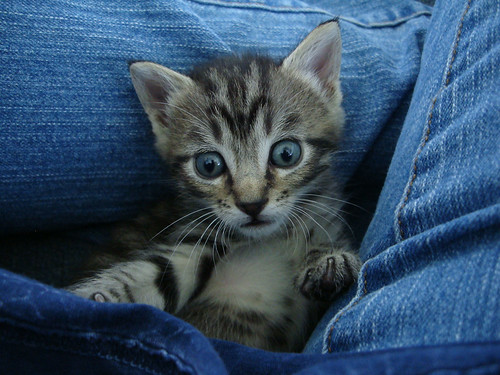 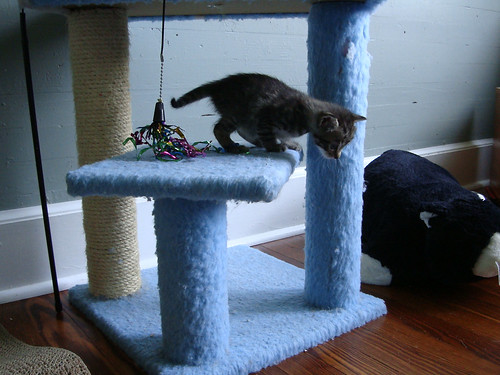 No, really, it’s okay. Just FLING yourself off that thing. I won’t have a heart attack or anything. (I put a cat bed down there after he did just that.) 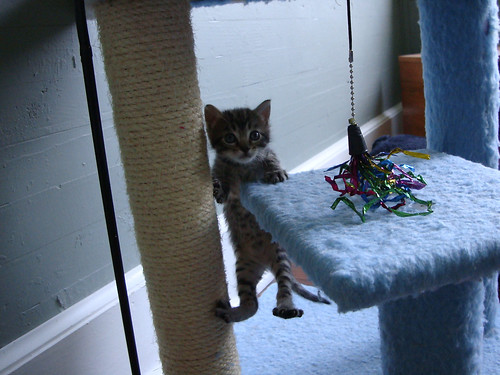 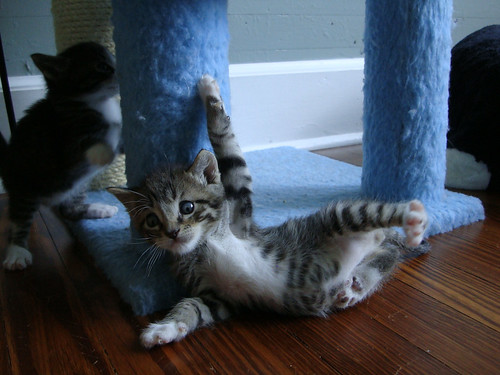 Cillian works on his ballet skills. 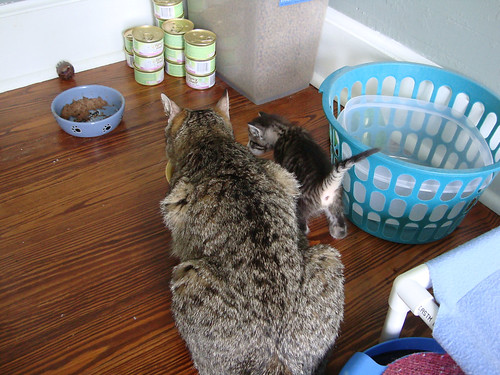 “Whatcha doin’, mama, huh? Whatcha doin’? Are ya eatin’? Can I have some, too? I bet that’s yummy, it looks yummy, I should eat some so I’ll grow up big and strong, right?” 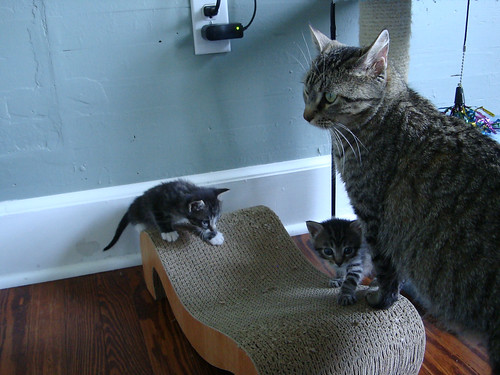 “Whatcha doin’, mama, huh? Are ya sharpenin’ your claws? I can sharpen my claws too, mama, watch! Watch me, mama, watch me! WATCH ME!” 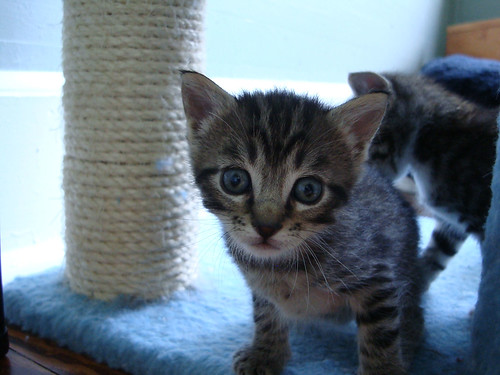 “I hope that lady doesn’t ::boop:: my nose again. I hate it when she does that.” 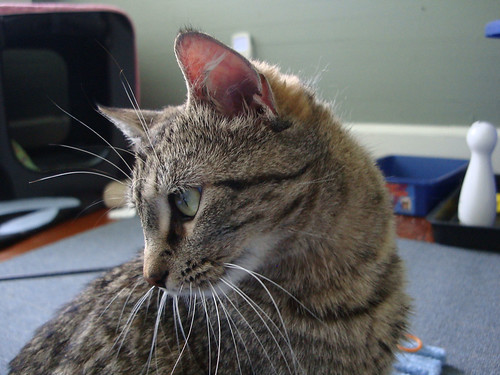 Maggie keeps a watchful eye out. 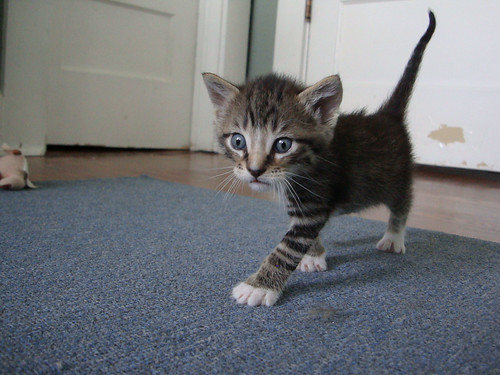 Everything REALLY amazes Cillian. Always. Most amazing thing ever, no matter what it is. 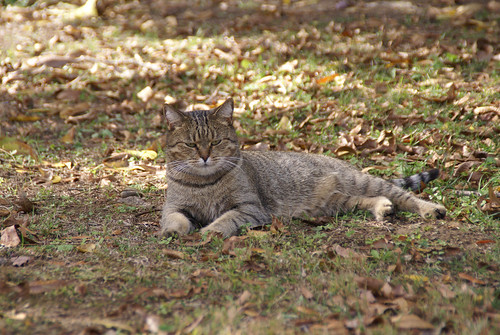 Sheriff Kara keeps an eye on stuff. And things. Sheriff of Stuff and Things, that’s her job description.