I found this comprehensive list of low-cost spay and neuter clinics nationwide while I was reading Black Cat Rescue, and thought it was definitely worth sharing.

Over the weekend, poor Maura developed diarrhea. Ten seconds after the vet’s office opened, I was calling to make an appointment for her. And since I was going anyway, I piggybacked the Bookworms onto the vet visit so that they could be Combo tested. I was completely certain that they’d come up negative and could be neutered and ready to go to the adoption center by the end of the week.

Maura’s on medication for her diarrhea… and the Bookworms came up positive for FIV.

I was so sure that they’d test negative that I was already missing them! But they’ll be around for another couple of months at the very least. I’ll take them back at the beginning of July for retesting, and hopefully they’ll be negative.

(For those of you who weren’t reading back then, the Bookworms’ siblings, the Wonkas, initially tested FIV positive and then were negative on the retest two months later.)

On the ride to the vet, Maura settled down and napped – she did not make one single peep of complaint, I swear she’s the most laid-back cat on earth – and the Bookworms howled and yelled and did their best to dig their way out of their carriers. I was about two minutes from the vet’s office when I thought “Huh. I swear I smell food. Maybe it was that restaurant I just passed…” Only, the smell of food didn’t go away, and I found out when I reached the vet’s office that there was vomit in BOTH of the carriers containing Bookworms. And Reacher had apparently gone swimming through it.

Of course, this was the ONE TIME I left the house without my bag of cleaning rags in case of emergency. Luckily, they deal with that stuff all the time at the vet’s (probably after all the nasty stuff they have to deal with on a daily basis, kitten vomit is like roses to them), and got ’em cleaned up and tested.

So anyway, yeah. They’re positive. But I don’t believe they’re truly positive, I’m sure they’ll come up negative on the retest. And Maura is sequestered back in the foster room, being medicated twice a day, and lolling around like she just don’t care. 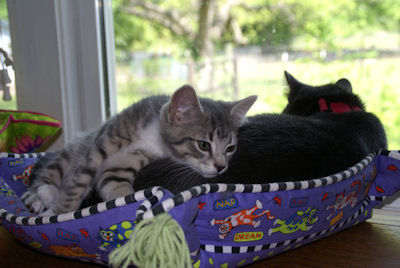 Reacher and Corbett, curled up sound asleep in the recycling bin. 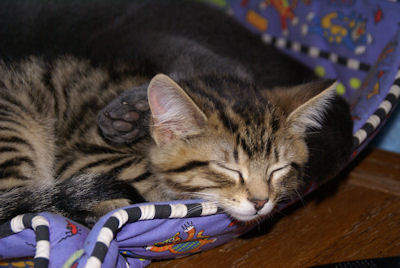 Please note Jake’s foot on the back of Corbett’s neck. 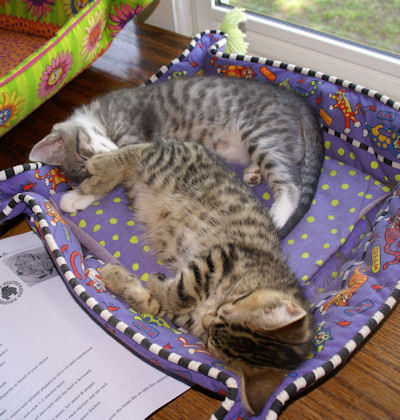 Corbett’s feet on Reacher’s face. Cracks me UP. 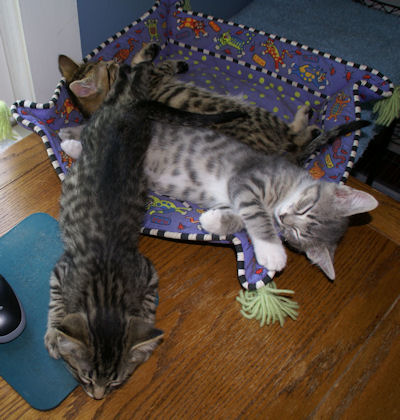 Rhyme, flopped across Reacher and Corbett. 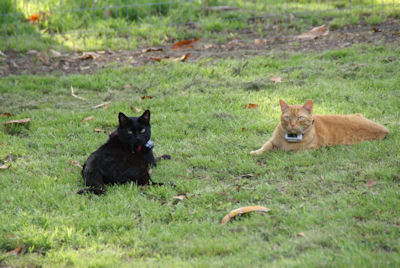 “What? WHAT YOU WANT?!” A Tommy and Sugarbutt confab in the back yard.