Who is that cutest sleepy black baby on the 2023 calendar? Mike? 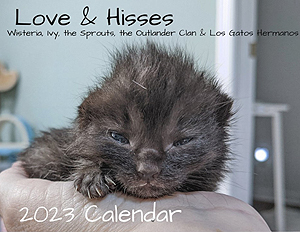 Yep, that’s sleepy baby Mike in my hand. I love his bedhead.

I’m wondering how you get shots like the one of Nacho with 3 feet in the air and have them not blurry. Do you use your phone or some special camera? I have to stop breathing to take non blurry photos so I’m amazed at how yours turn out so wonderfully. Thanks.

I have a very fancy camera (a Sony Alpha) that I get out of the closet when I remember (so, maybe once a year), and that’s where most of the jumping and leaping pictures come from. (It is honestly too much camera for me, and I don’t know what I’m doing with it, but every once in a while I get lucky! I’d say that about 99% of the pictures I take are taken with my phone, which is a Pixel.)

Yikes, never vote on Election Day if I can help it. Hope the lines weren’t too bad.

Like the sticker, love how they’re getting individualized. Though they don’t have to be this crazy.

Also, that sticker is AWESOME!

Update: Rocco (the black and white tuxie boy who was mentioned in last Friday’s post as one of our “porch cats” – ie, belongs to a neighbor but has adopted us – was neutered yesterday at the spay/neuter clinic in Huntsville (I had to make the appointment a month ago because they’re booked out that far). We have big hopes that being neutered will stop him from spraying the front door. Fingers crossed! (That boy didn’t meow at all during the 45 minute drive to the spay/neuter clinic, and as long as I kept his carrier covered, he was calm.)

Oh, and while I’m updating on cats: Charlie had his yearly exam yesterday, and now weighs 18 pounds (the vet and vet tech both were amazed at how large-framed that boy is (if you missed it earlier this year, we had his DNA tested and the results are on his page). Fred also took Trixie for a quick exam, and she’s healthy (the vet agreed with our assessment of her as being 2 – 3 years old, so we’re calling her 2 years old and we’ve given her November 7, 2020 as her date of birth.) She weighs 9 pounds. 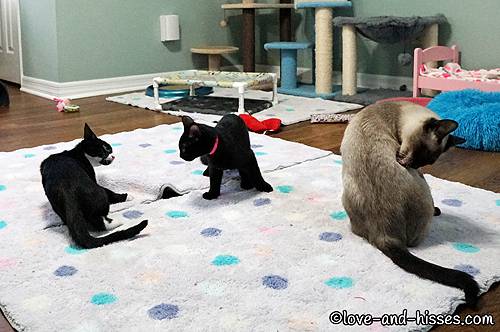 I love how Francesca and Saul are thisclose to getting into a tussle, and Kim is totally ignoring them. 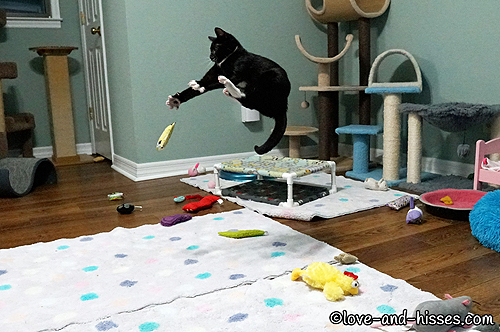 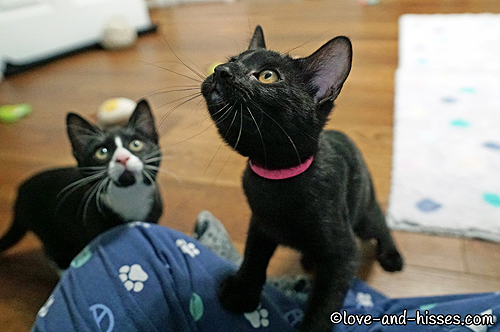 Francesca and Saul are all “Whatcha got there, lady? You gonna throw more toys for us?” 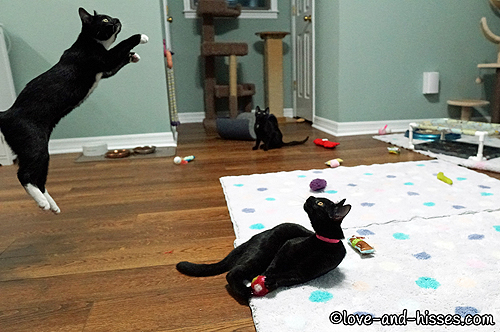 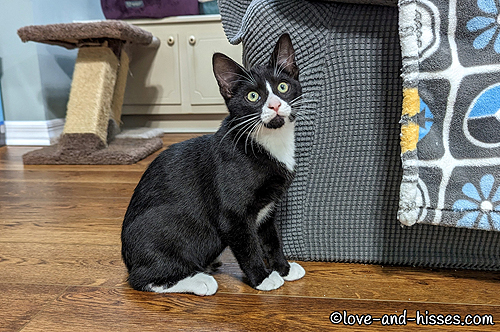 Saul’s keeping an eye on me. 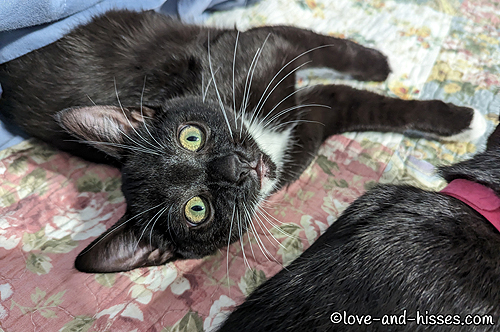 Nacho, done flying for now, thinks a nap is just the thing. 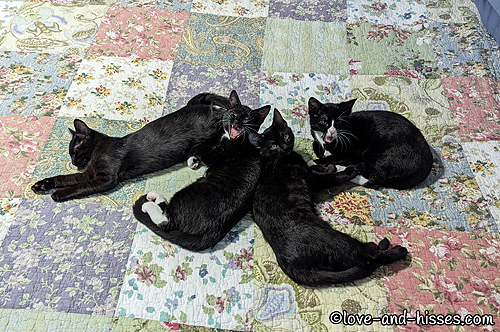 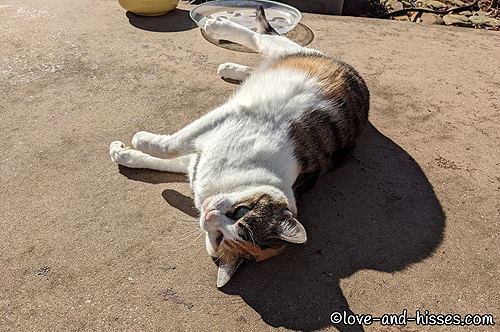 Alice really enjoys the sun, can you tell?

YouTube link
It is time for breakfast – the kittens (and Mama) say so! 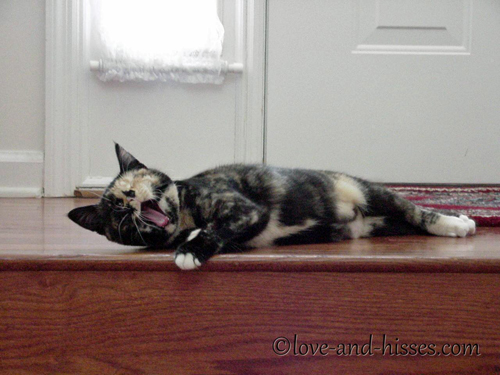 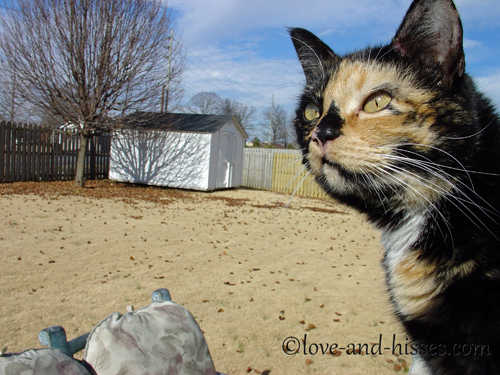 Throw Back Thursday: two of my favorite pictures of (permanent resident) Miz Poo, who was with us from 1999 until she died in 2015. She was the absolute best, sweetest girl and loved everyone she saw (unless they were cats, in which case she had no use for them.) Her “official” name was Scrappy (we were going with an “S” theme for our cats back then), but she became Miz Poo pretty quickly (I’d tell you why, but I have no idea how she got the nickname, only know that it wasn’t poop related) and when the vet would call to talk about “Scrappy”, I always had to stop and think about who they were talking about. ❤️ 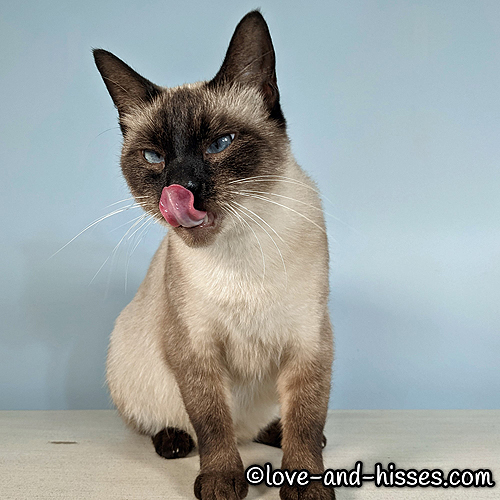 That’s right – it’s Thlurrrpsday, and does anyone have a better thlurrrping form than our girl Kim Wexler? She’s the best! 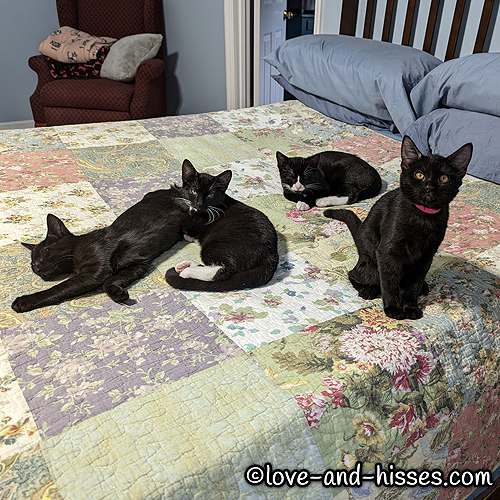 People have asked whether the kittens (and Kim) act like they’re missing Gus and Lalo. The answer? Nope, they’re just going along, business as usual. They all saw the boys leave, and I think they – at least on some level – understand.

YouTube link
It’s play time in the kitten room – and everyone’s playing! I don’t know if I’ve really captured it, but I’ve noticed that Kim is happy to play on her own, but if the kittens start playing with her (jumping on her, swatting at her tail), she’s happy to play with them, too. 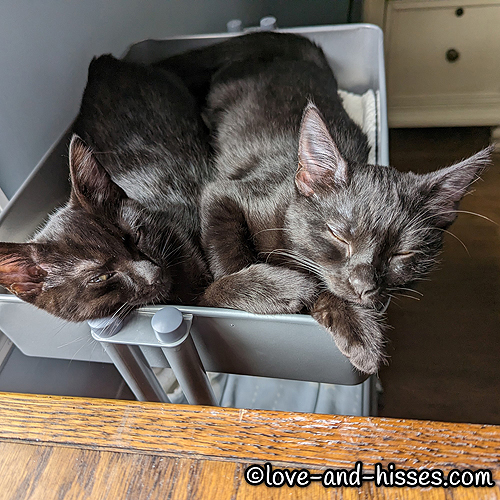