What has happened to Charlie? We don’t see nearly enough of him. And will he ever be allowed to meet the babies, or his mama too protective still?

Nothing’s happened, the weather’s been so nice lately that he spends 99% of his (day) time outside, and I tend to not bring my phone outside with me. So I’ve missed out on a lot of really good pictures, is what I’m saying!

I haven’t shared this story before because I felt so bad for Charlie when it happened, but we actually let Charlie in the room with Molly and the kittens when they’d been with us for about 2 weeks. Molly is SUCH a mild-mannered cat that I thought a supervised introduction would be okay, and for the first few minutes it was fine. Then one of the kittens spotted Charlie and floofed and hissed, and Molly went after Charlie. It was mostly noise and a few hard slaps from her, but it was scary (for Charlie AND for us), and since then he won’t go near the kitten room. He is interested in the kittens, and I’ve started letting the kittens out for short periods of time, but the issue is that if all the kittens are out roaming around, Molly wants to be out of the room as well and I worry about how Charlie would deal with her out and about. (That said, Fred is finishing up something that blocks the railing across the upstairs and that will block the stairs so that Molly AND the kittens can have the run of the upstairs at least. I’ll take pictures when it’s all done.)

(Side note: one year ago was the entry where I posted that the kitten known as Aramis was adopted by us, and would be known as Charlie. I should do a post wherein I talk about how the last year has been (it’s been great and weird and hectic and wonderful), and I will intend to do that, but let’s be honest – I won’t actually write that post. Just pretend I did, okay?)

I’m sure they’ll get adopted, but in your experience, has the transition from large rooms with tons of stimulative toys and trees to the cubes at Petsmart been difficult at all for kitties? So hard to understand why there has been no interest. They’re beautiful, healthy, socialized kitties. Will we still get occasional updates?

It depends on the kitties – usually they’re scared at first, but adapt pretty quickly. My prediction is that Molly will handle it with a shrug and the kittens will be scared at first but then relax after a few days (at least they’ll have each other for comfort.) I will share any updates I can (the volunteers who clean and scoop at Petsmart often share pictures and updates on how things went.)

(Note: I don’t actually know when Molly and the boys will go to Petsmart – I think we’re waiting for room to open up.)

Love your home and your plans for it. Just curious, do you take your cats with you when you have to go to the storm shelter?

If we ever have to go to the storm shelter, we will take the cats (including fosters) with us.

What I’ve been wondering is, with the bottom of the door so high off the floor, do you lose lots of toys under the door? None of your pics or vids hint at it, just wondering how you could get so lucky?

They knock toys under the door pretty often, but I have a draft stopper on the other side of the door. I actually put it there to block any sights and sounds of the permanent residents (so as not to stress out Molly – or any future mamas), but it actually catches the toys pretty well and the kittens can reach under the door and grab the toys. (I am actually considering replacing it with something like this, because the kittens can (and sometimes do) push the draft blocker way out away from the door. And honestly, sometimes I trip over the stupid thing on my way into the kitten room. 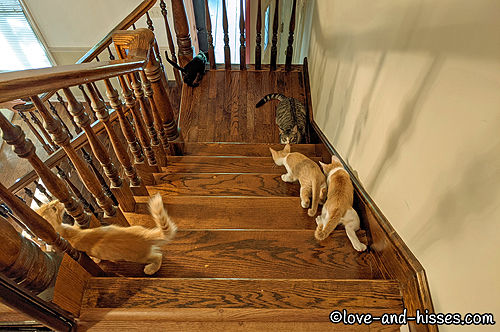 Kittens on the move (they rarely go past the landing), Charlie snoopervising. 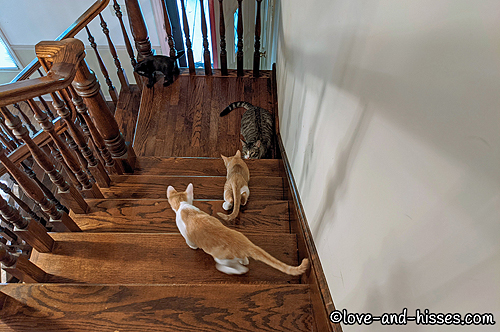 The moment after I took this picture, the kitten closest to Charlie hissed. RUDE. 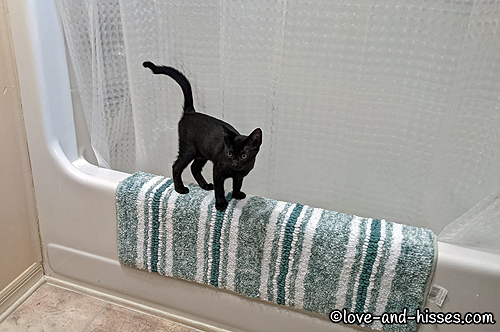 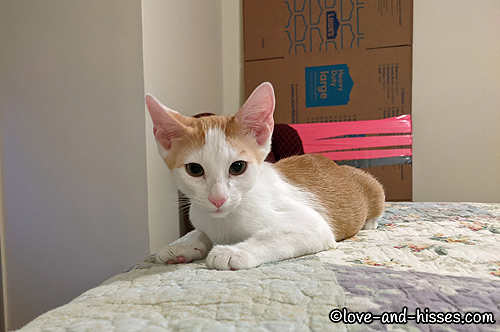 Christopher Chutney on my bed. 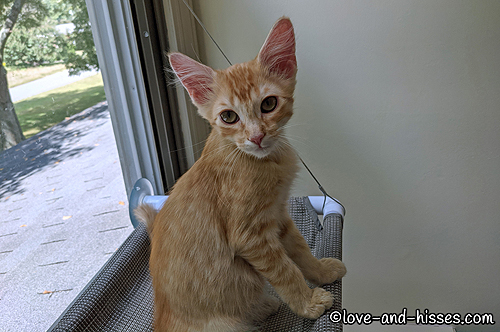 I think Theo Pesto could use a nap. 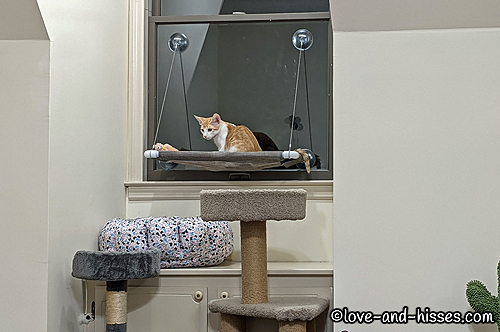 That window hammock – this is the one we have – has been a big hit in the kitten room. I can report to you that since I put it there, it hasn’t moved at all, and Molly likes to sleep there at night (usually with a kitten or three.) I haven’t had an issue with the suction cups sticking (some people in my FB comments have had that issue), and it’s held up well so far. 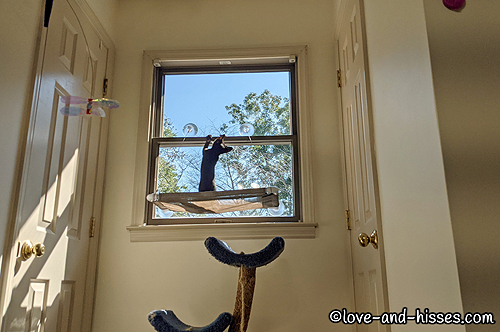 So naturally I put one up in the OTHER window. The one that gets all the morning sun. Sofia Soy Sauce was the first to notice it. 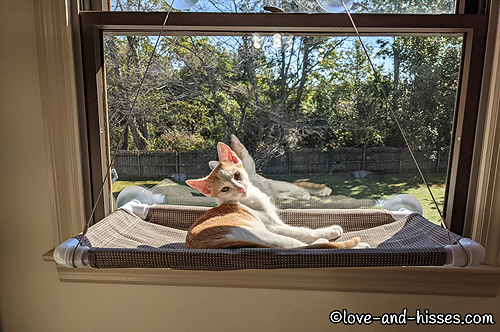 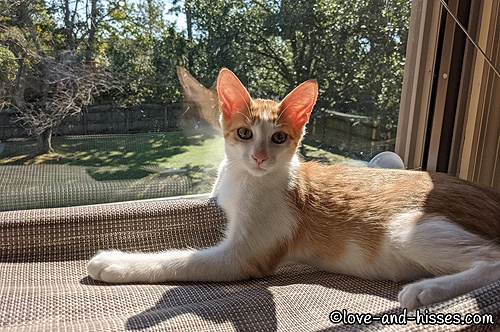 That window overlooks the back yard, and when I was out there watering plants the other morning I looked up to see a little orange and white face staring down at me. By the time I got my phone to take a picture he was gone – I’m sure he was astonished that I still exist when I’m not in the kitten room. 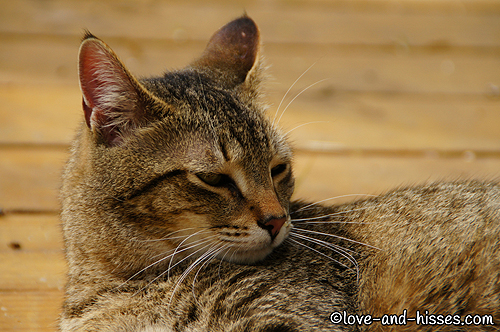 An old picture of Dewey, to remind you that (1) he exists, and (2) he’s gorrrrgeous.

(If you’re new to Love & Hisses, Dewey is our permanent resident who absolutely loathes the camera. He always knows when I’m about to take his picture, and he disappears into another dimension. So I’ve given up, and I have to say – I think he appreciates that I’ve abandoned the attempt to take his picture. He seems a bit more relaxed!) 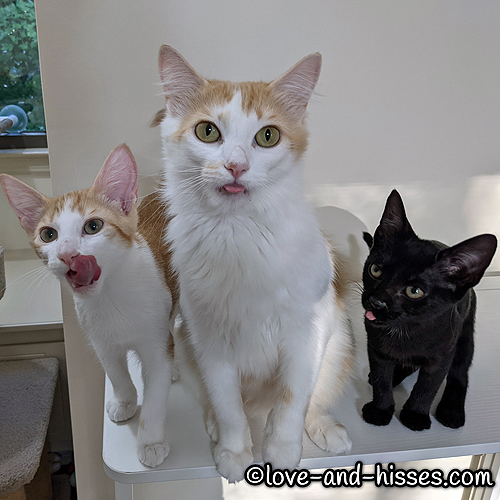 It is #thlurrrpsday, after all. (Left to right: Franco Fondue, Molly Marinara, Sofia Soy Sauce.) 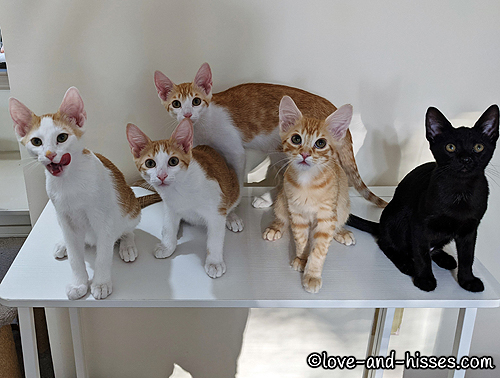 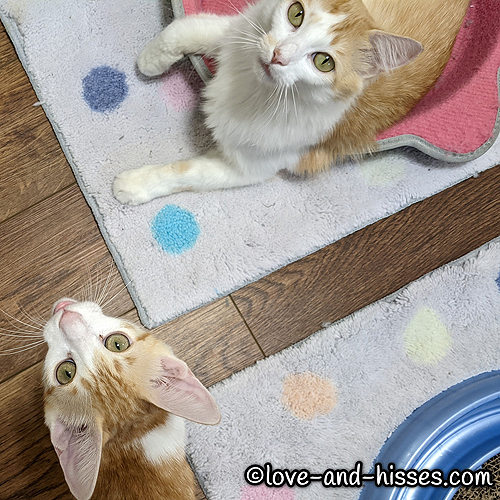 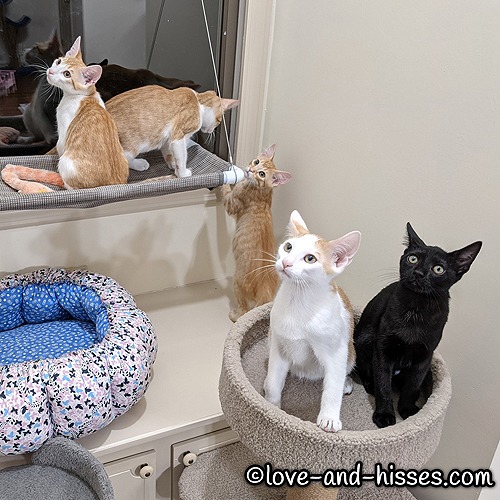 YouTube link
Who’s da BAYbee?! No clear answers, but we get a few halfhearted responses. 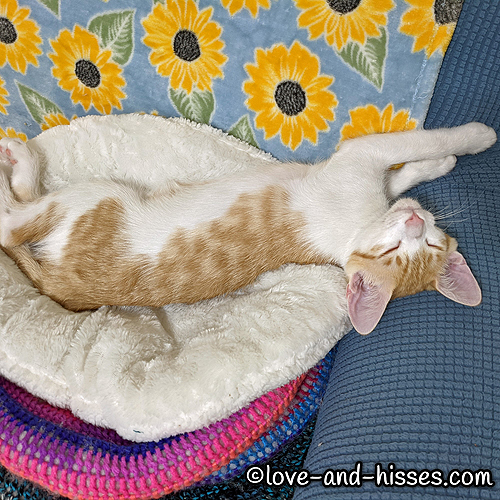