Thank you for taking such good care of little Mike and all the other kittens and their moms. I love all your posts, videos & commentary. I loved the throwback to past bottle babies. In the one of Pattypan it looked like she was wearing a cast or bandage on her right front arm…I mean leg. What had happened and how did things turn out for her?

She had an abscess on her leg when I got her and it required twice-daily warm compresses, dressing changes, and antibiotics. She healed up just fine eventually, but the couple of weeks trying to keep her wound covered gave me FITS. We had to use a combination of gauze covered by Vetrap the tape that sticks to itself, and then cover it in tape. And we had to carefully cut the whole mess off, do the compress, and re-dress everything twice a day. She was a little trouper for the most part, though! And like I said, she healed up just fine. She was a sweetheart (the whole litter was.) “Let’s get Mikey! He won’t try it! He hates everything!”

And the rest followed.

I LOVE this. I’m sure it’s exactly what happened! (We’ll have to see how it goes in the future. “You climb it, I’m not climbing it. Let’s get Mikey to climb it!”)

Maybe put the pie plate where only Mama can get to it?

Oh, there’s a second pie plate on the couch, but Mama appears to be a floor dweller. I’ve never seen her climb any of the cat trees, and only a few times has she been on the couch. (And update: the pie plate did indeed get peed in, and is currently drying after being treated with Odor Mute, which seems to have worked.)

Just out of curiosity, if you had to pick the absolutely softest kitten, who would it be?

They’re all pretty soft, but I would say Lalo or Mike would rank as the softest. 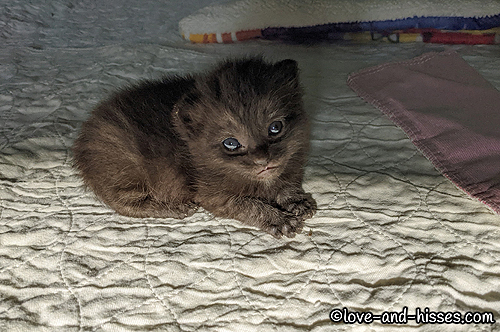 Mike is so over-the-top cute that it’s verging on offensive. 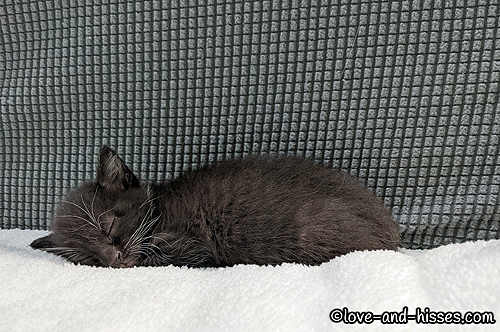 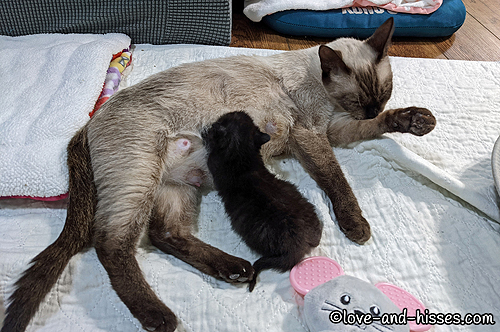 Mike at the milk bar. 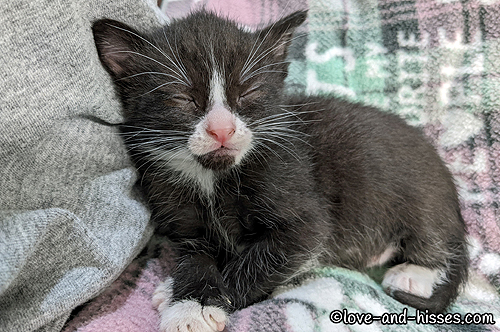 Saul has a snooze. I guess it’s a lazy day around here. 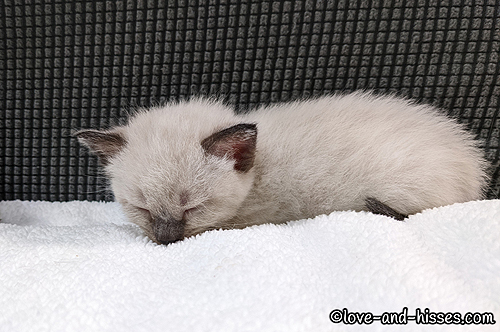 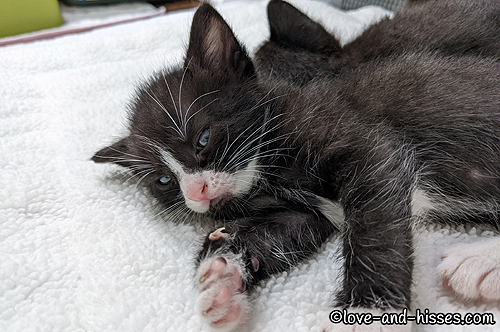 Saul wakes for a moment to show off his Claws of Doom. 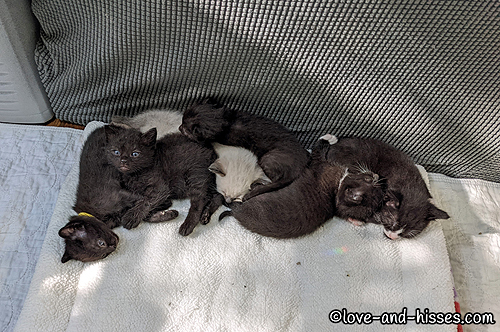 The whole bunch of slackers. From left: Gus, Francesca, Mike (back), Lalo, Nacho and Saul. 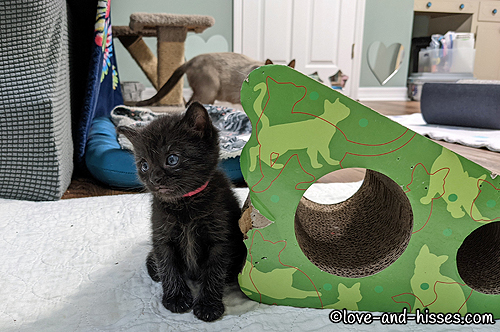 Francesca’s eyes might be open, but I don’t think she’s awake. 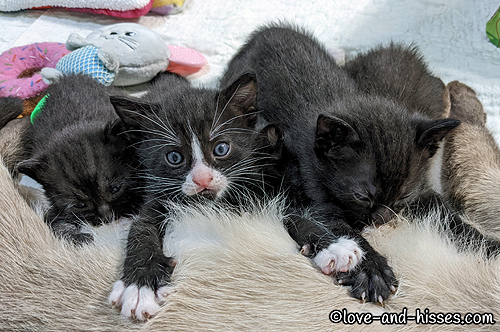 There we go, there are some wide-awake eyes from Saul. (That’s Mike to the left, Gus to the right.) 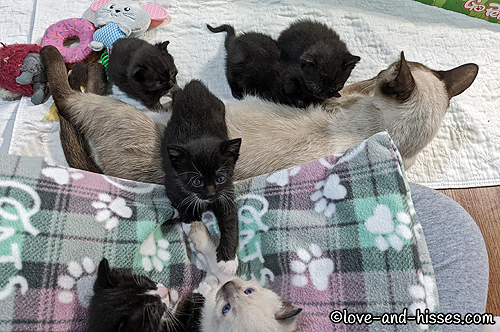 Nacho uses Kim as a step to get from the milk bar to my lap. RUDE. 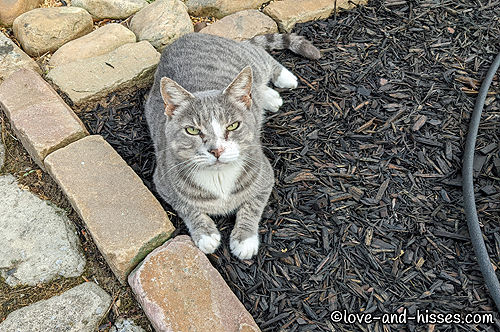 Archie in the back flower bed. That’s a hose next to him, not a snake – though I will note that earlier this week a very long snake (a rat snake, according to Fred. Or maybe it was a king snake. One of those, anyway.) went slithering through the back yard, and Archie just watched it go. If Stefan were still around, you know that thing would have ended up in the house. (Not that I’m complaining that it didn’t!) 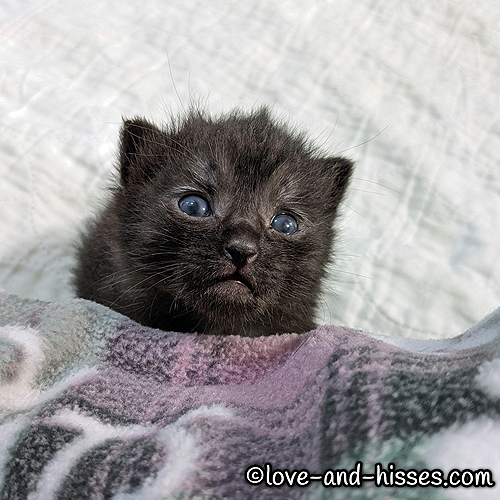 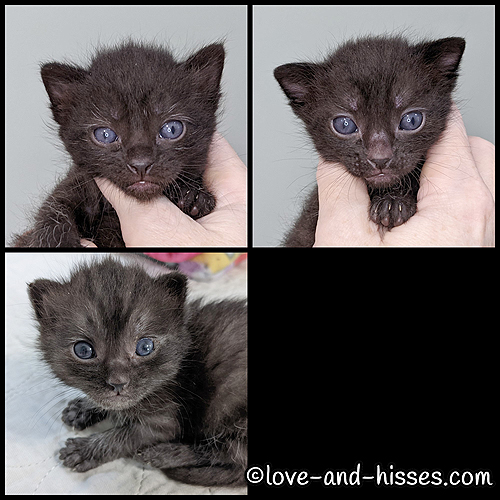 This is how I can tell the difference between the three black kittens when I can’t see their collars:⁠
⁠
Francesca, upper left: Has a big round head, a large forehead, and the white fur over her eyes looks like she used a white pencil to draw in some eyebrows. She’s also got scattered white fur on her cheeks. She’s got a healthy scattering of white fur on her body, too.⁠
⁠
Gus, upper right: the top of his head is flatter – his head is more an upside-down triangle than a circle. He has a smaller head, bigger eyes, and the fur on his nose and around his mouth is thinner, which in some lights makes it look like those areas are bare (they’re not – in person, you don’t really notice the thinner fur unless you’re looking for it.)⁠
⁠
And Mike, lower left. He looks nothing like the other two – for one, he’s smaller. His head is practically a perfectly round circle, and his fur is much lighter than Francesca’s and Gus’s. His eyes are smaller and more widely spaced. (Regarding his fur: I don’t think that’s a fever/stress coat, because with a fever coat the ends are silver and the fur underneath is black. With Mike, the fur underneath is silver, and the ends are black. Maybe he’ll be a black smoke? Or maybe his fur will turn darker as he gets older. Only time will tell!)⁠
⁠
(Side note: A fever/stress coat, if you’re not familiar with the term, is believed to happen when a pregnant cat is ill or under stress, causing her temperature to spike, and as a result she has kittens who are born with a smokey gray coat. Their fur usually darkens as they get older. Google “fever coat kitten” to see some very cool pictures of kittens with fever coats.) 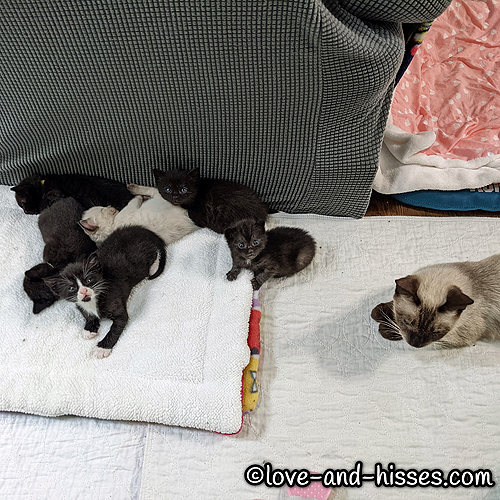 I love how half the kittens are out cold, the other half are looking directly at me (obviously checking to see if I’m holding a bottle), and mama is off in her own little world.

YouTube link
Mike is sleeping with his eyes open, and Nacho’s in the litter box telling us all about it! 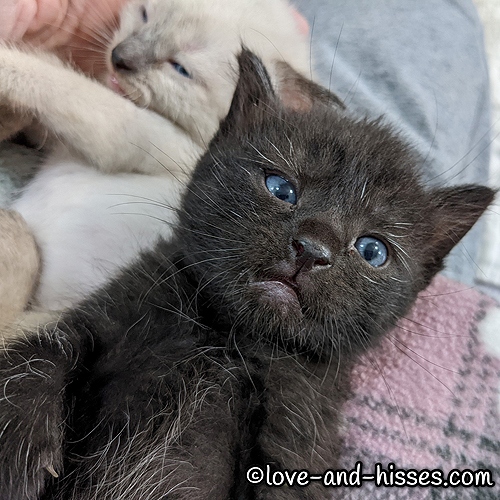 If you think I don’t kiss Francesca’s silly little face 1,000 times a day, then you know nothin’. (All the kittens get a LOT of kisses all day long. I can never resist kissing those cute little faces.) 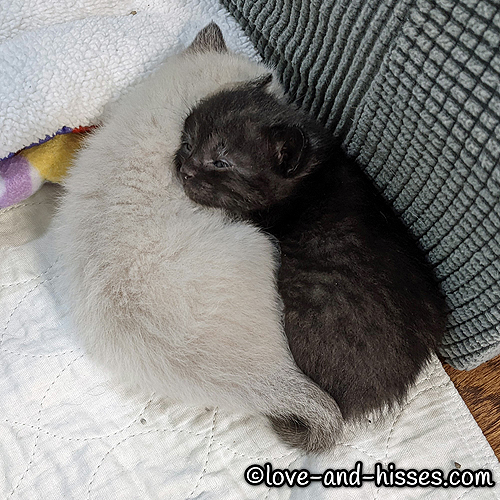