I love that little reddish spot on Margeaux’s head. Katriane and her little Mini-Me Amelie. “Excuse you, lady, we is havin’ a snuggle.” (Francois and Jacques, with Madeline in the background.) “Amelie, your BREATH!!!” (Amelie, Antoine (who thinks he’s so funny), and Madeline) Jacques and Antoine snuggle up for a nap. Growing those kittens takes a lot of rest. Esmee’s keeping an eye on you.

The kittens – and Katriane and Margeaux – met the vacuum cleaner yesterday. The kittens were a little interested, a lot wary, but not all that scared. They got up on the little cat tree and kept an eye on the situation. Margeaux retreated to her favorite spot – atop the cabinet, like where she is in that picture above – and kept an eye on me. Unfortunately, Katriane had a packed schedule and coincidentally needed to be on the opposite side of the room from wherever I was when the vacuum was running, so I’ll have to report on her in the future. 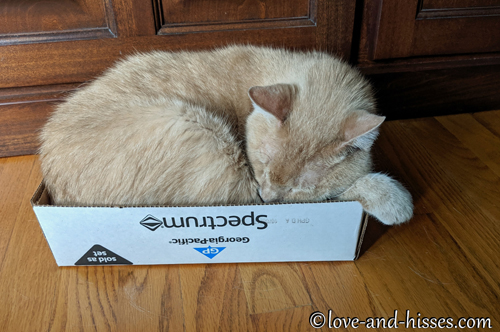