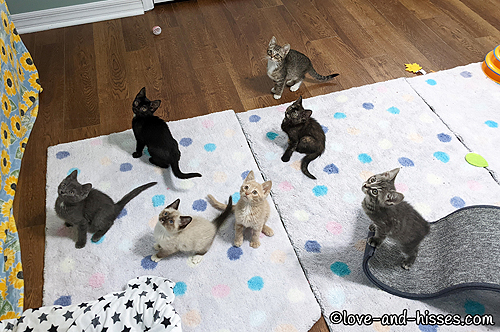 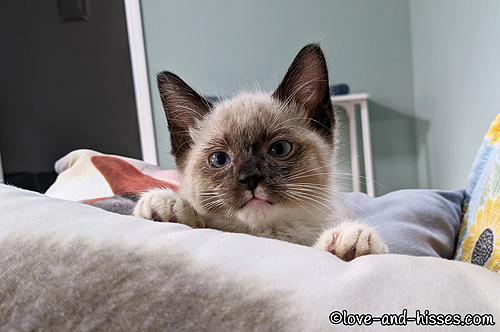 Fergus is all “I may be a bit overdramatic, but I am a cutie-cute-cute, so I get away with it.” He’s not wrong! 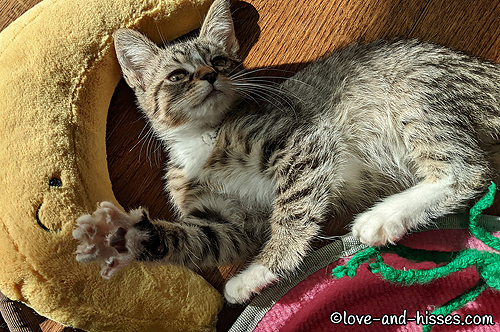 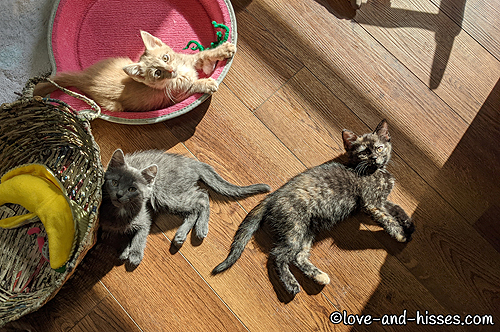 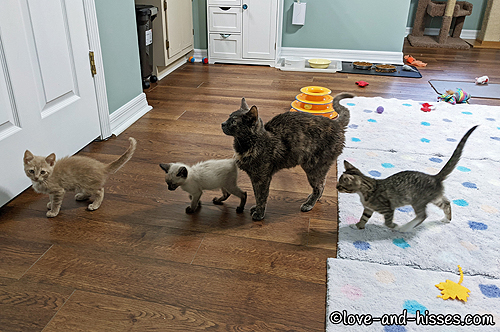 Like I said: Jocasta’s like Pigpen, only she’s surrounded by kittens instead of dust. She thinks if she stares at the door long enough, it’ll open and she can slide through. 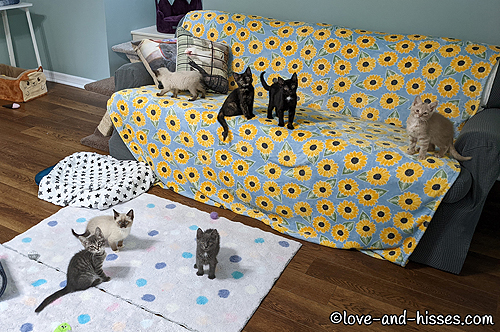 Another shot of 7 of the 10! On the couch: Ian, Jenny, Lizzie and Jamie. On the floor: Angus, Fergus, and Lord John Grey. 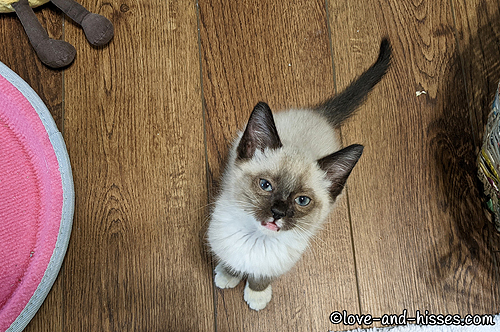 Fergus is judging me. 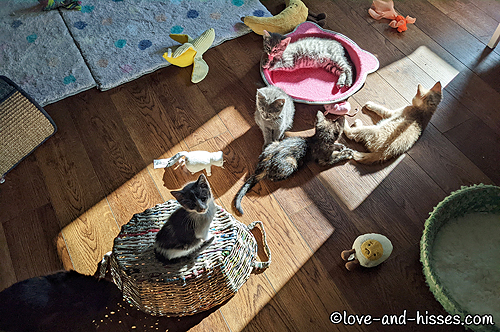 Brianna likes to sit on that upside-down basket and watch the other kittens play (and yes, sometimes she joins in.) 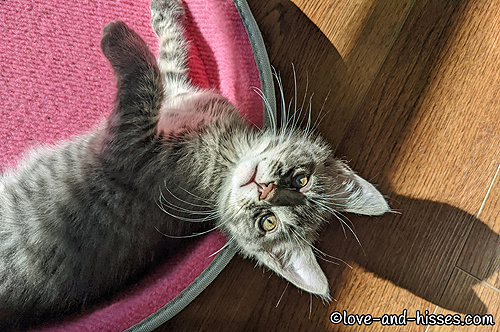 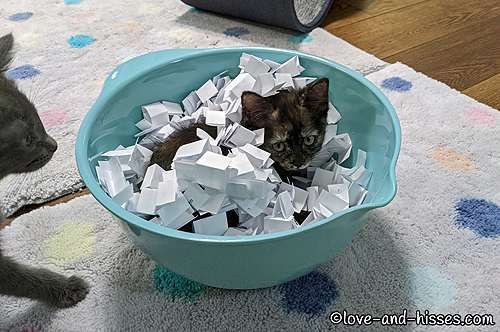 I did the drawing for the quilt raffle Saturday night, and had no idea just how enamored the kittens would be of the bowl of folded names. They thought it was the BEST thing ever! 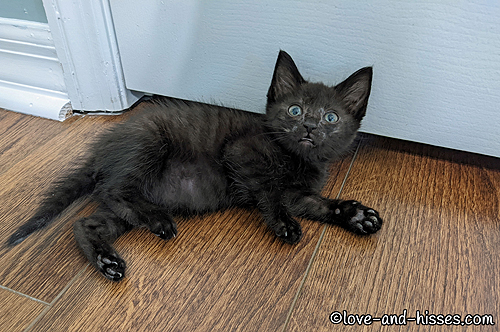 Roger the hot mess just kills me dead. He is the SWEETEST, sassiest little guy. I’ll be glad when the fur on his face fills back in. (When I got the kittens, he had a lot of gunk stuck to his face, and in the course of giving him a bath, even though I was VERY gentle, a lot of fur came off with the gunk. I think he’ll be a beautiful boy when his fur grows back in.)

(Regarding Roger: more than one of you have compared him to Tony Rocky Horror Pickle, and I do indeed see the resemblance. When I get a minute, I will whip up a comparative collage of the two.) 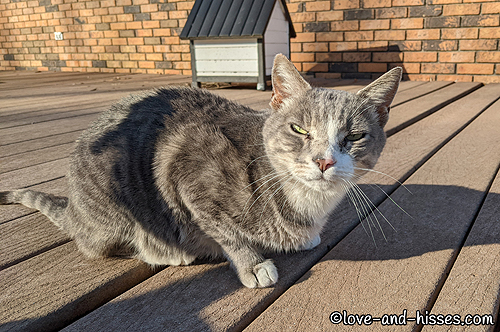 Archie’s enjoying the heat. (I, on the other hand, am ready for winter.) 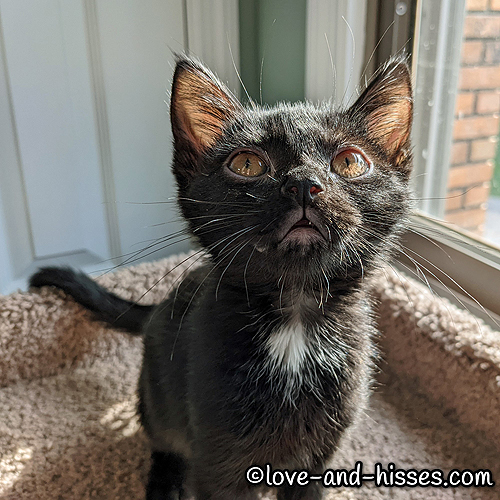 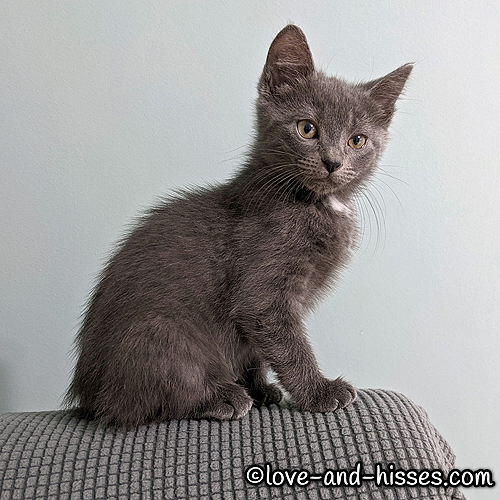 YouTube link
Clover was adopted yesterday and went home! (He’s staying local here in the Huntsville, Alabama area). Here he is in pictures from the day of his birth (March 2, 2022) to the day of his adoption (June 19, 2022), backed by a soundtrack of purring kittens. 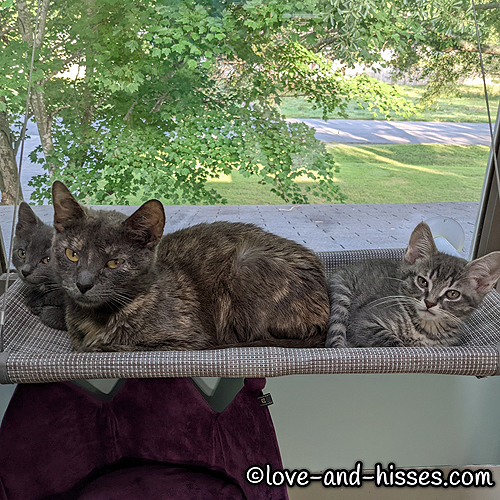 I’m sensing a lot of attitude from these three. (Lord John Grey, mama Jocasta, and Angus.)

YouTube link
It’s play time in the kitten room! If you watch closely, you’ll see a skitterbug or two. 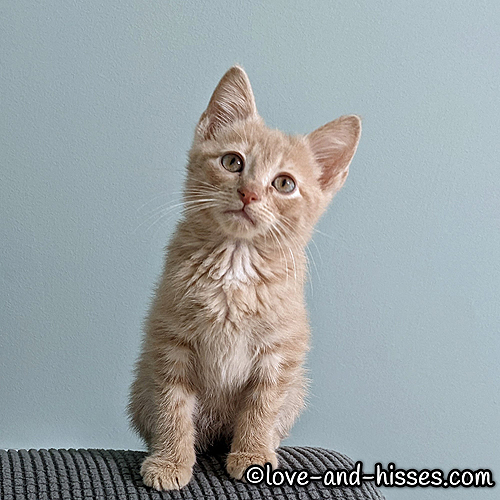 I can’t get over (1) how adorable Jamie is and (2) how blue this wall looks in pictures, when in real life it’s green. 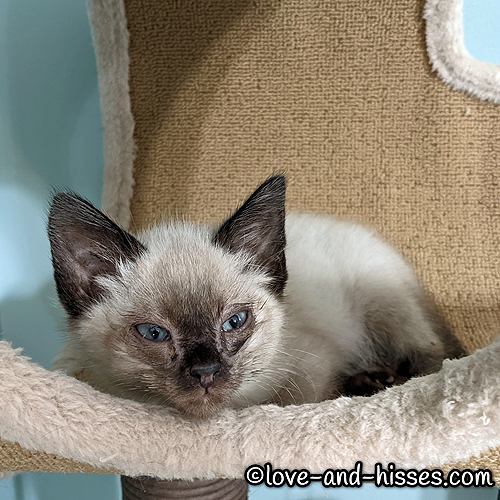 Good night innernets. (Ian)(Yes, his eyes look goopy. I had just put ointment in them.)