Thus far, none of the Noms have been adopted. Adoptions are really slow right now (I think they tend to slow down right before the 4th of July holiday), but hopefully they’ll pick up soon. I saw them Tuesday morning when I filled in for the usual Tuesday morning cleaner. They weren’t super happy about being in that cage, but I let them out and played with them, and they climbed in my lap and got lots of kisses.

If you’re in the Huntsville area, I’m going to be in a (hopefully very very short) news segment with a couple of the Noms tomorrow afternoon, on channel 31 (WAAY), at 4 in the afternoon. They do a segment promoting the North Alabama Spay Neuter Clinic every Friday, and wanted to feature some adoptable kittens since it’s Adopt a Cat Month.

The tough thing will be deciding which two Noms to bring – I’m thinking Logie and Newbery because they’re pretty fearless. But on the other hand, Razzie is tiny and cute with her crooked little puff of a tail, and Darwin is drop-dead gorgeous, so… Oh, I don’t know. I’ll decide when I get to Petsmart to pick them up!

So anyway, check it out if you’re in the area. I’ll be the one giggling nervously through the entire segment. If you’re not in the viewing area, I’ll link to it on their website, assuming they post it, so you non-locals can appreciate the horror as well.

I have zero Crooked Acres pictures for you again this week. The good news is that my camera is on the way back here from Sony (it just needed a good cleaning), so next Thursday I’ll have plenty of pics to share!

ALSO, Kelly got her blog up and running, so go check it out!! 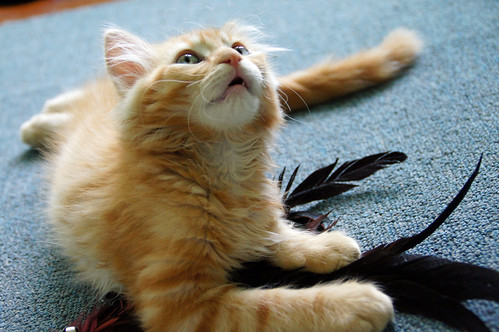 Close your mouth, Cap’n Floof. (I posted in the comments yesterday that the Cap’n had been promoted to Major, but due to a biting incident on his part, he’s back at Cap’n. Also, I possibly like the sound of Cap’n Floof better than Major Floof, even though he DOES have some major floof going on.) 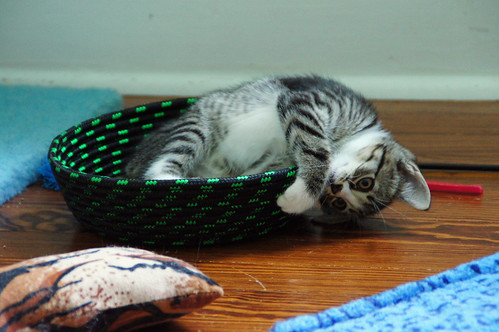 Fianna loves her basket so. 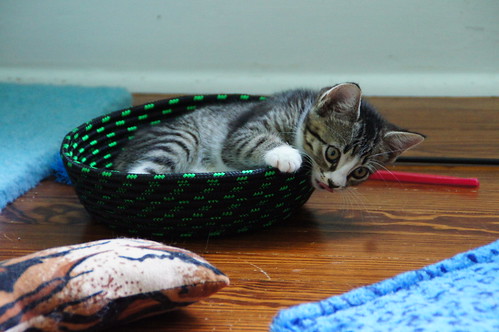 And it fits her perfectly! 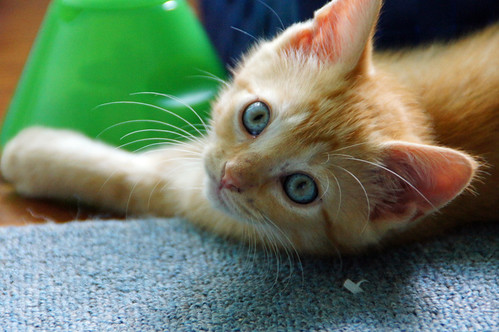 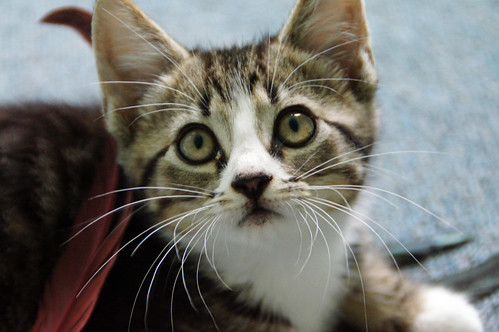 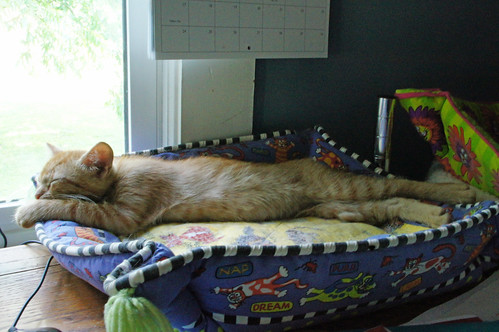 Norland, also known as General Grumpy. (He may look kind of grumpy, but he’s a total sweetheart, through and through.) 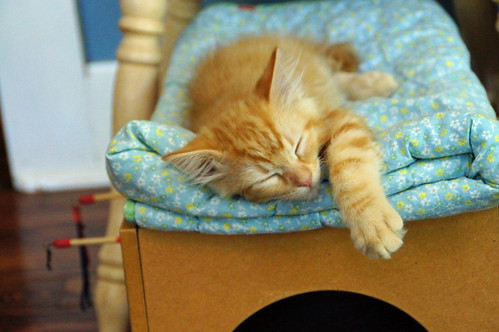 The Cap’n takes a snooze. 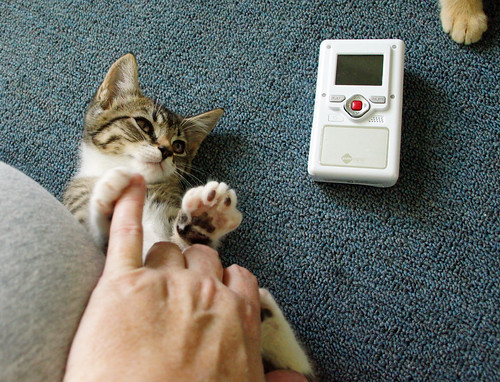 “Please, lady. Your belly rubbing is starting to bore me. You need to brush up on your technique.” 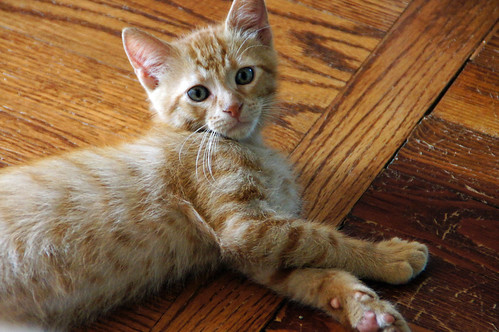 “General Grumpy gonna make you go scrub the toilets if you don’t shape up and gimme some snackin’.” 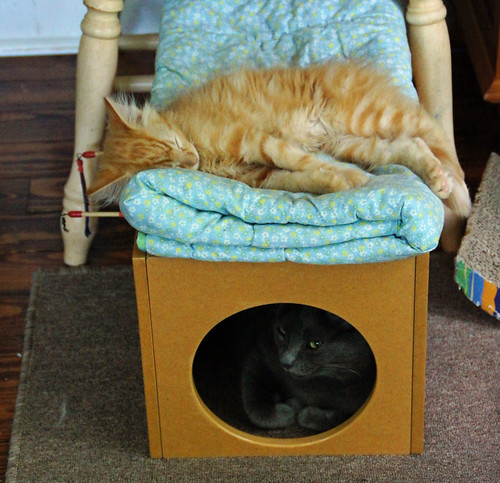 Cap’n Floof has his own loony one-cat security detail. 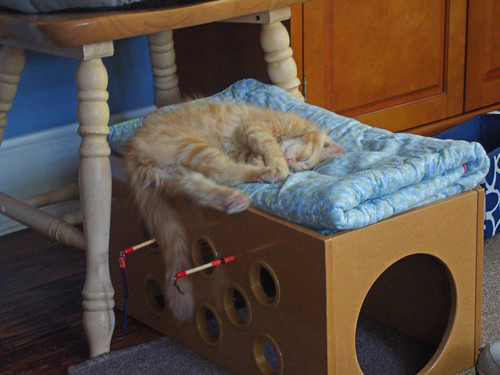 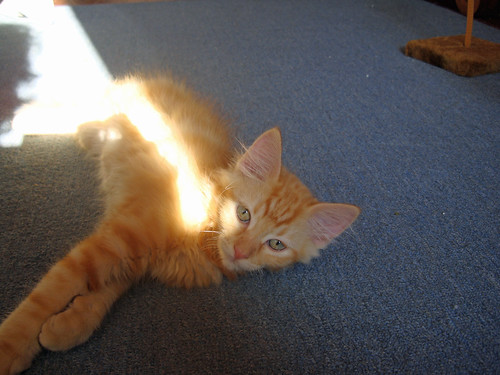 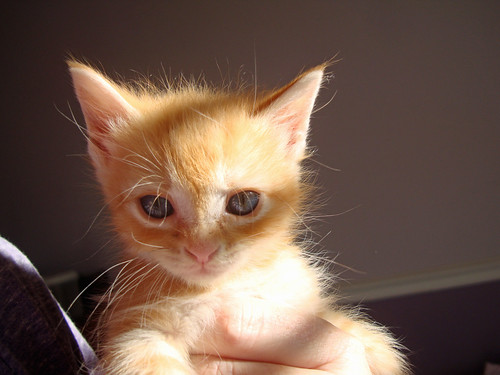 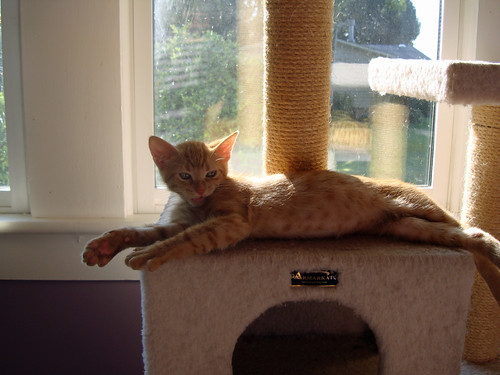 One thing that gets me about Grumpypants is how long his toes are. I think he’s going to be a long-limbed boy. 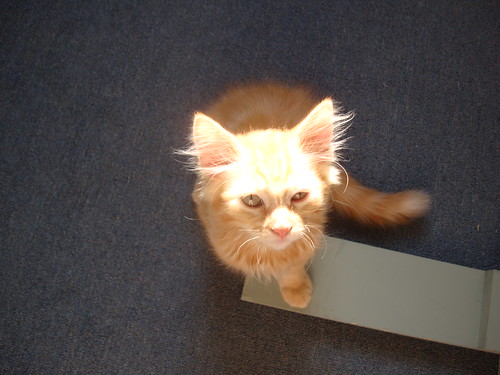 Brandywine and the ‘Maters are doing well. Did I mention that these babies are just wild little things? They totally are. The good thing is that they are just a bit too small to climb up on the “steps” to the wall basket, so Brandywine gets many snacks a day where they can’t stick their little noses in and steal some of the food.

I should have told y’all the other day, when I mentioned the wounds on her back, that they don’t seem to bother her. If Fred or I accidentally brush them with our hands while we’re petting her, she doesn’t react at all. They look nasty, but they’re healing very well, and she doesn’t mess with them very much. 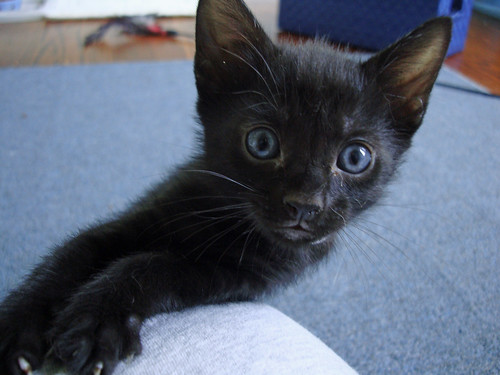 I don’t know who this is – Caspian or Wellington. I finally got the brightly-colored collars I ordered for them, I just need to get them put on. 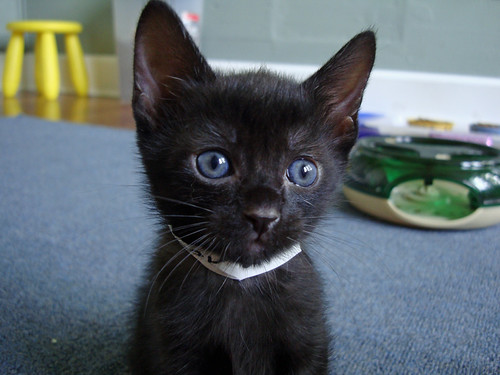 Wellington or Caspian. I so love the look of those gorgeous blue eyes against the black fur. Why o why can’t they stay blue? 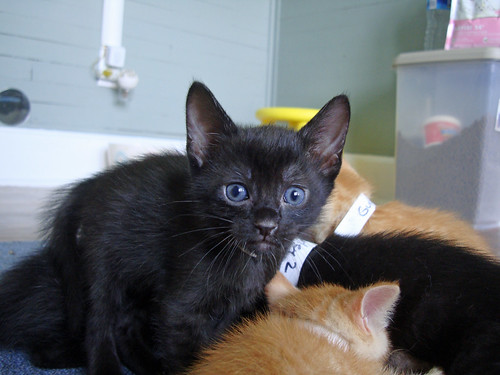 She certainly does put up with an awful lot from those boys. 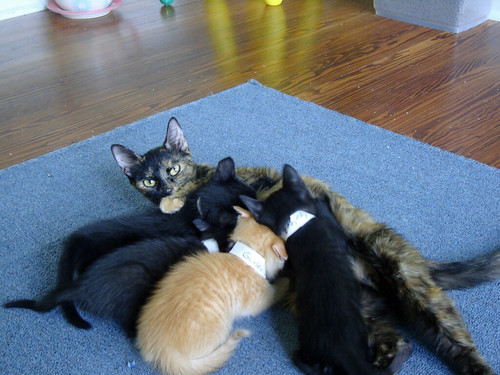 And yes, her ears really are as big as they look – they’re huge!

We’re probably going to start giving Brandywine a little time on her own this weekend. We’ll move her into Fred’s room during the day for a few hours at first, and see how that goes. I imagine she’ll like having a little time to herself without her own personal screaming entourage following her around constantly. 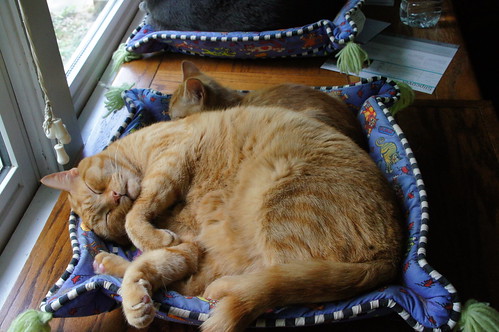 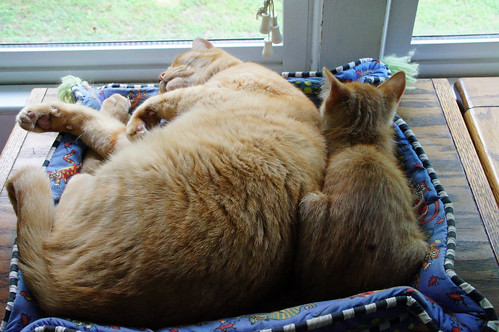 You KNOW Sugarbutt had to be deeply asleep to not realize that that little upstart had climbed in with him!