Do any of your cats chew things? My cat is always chewing the corners of paper and books in my room – and rubbing her face against furniture that leaves brown marks. It’s really annoying – everything is getting ragged. She seems to not do it if she’s eaten recently, but putting food down doesn’t always work – it’s like she doesn’t know it’s there, and if this is her way of showing hunger, she’s hungry all the time! Do you know of something cheapish I could buy for her to rub her face against and chew? It can’t be anything small enough for her to pick up, because then she’ll take it into the lounge room where the dog is and the dog will claim it.

Rebecca said this: My cat doesn’t chew, but she does rub her face on everything. She’s scent marking, and I also think it just feels good. We call it “making nice” and it’s adorable! I would recommend Feliway, either the spray or the diffuser, for items that you don’t want her to mark (they’ll already smell like her), and also put out a box or something that is ok for her to gnaw on. You can find a rubber bristled item that you can put on the corners of doors or walls, and she might end up loving that.

By the way, cleaning the markings is easiest with a water-based cleanser (ie not Windex). We just accept that they are part of owning a happy cat!

Thanks for chiming in, Rebecca – you answered it pretty much the way I would have! I don’t notice the cats chewing on much around here – except cardboard boxes – but they certainly rub their faces on just about every corner they see. I’m thinking of getting one of those corner groomers for the doorway between the hallway and front room.

I bet you didn’t know how avant garde you are there with your kitten scratcher wiggle made of cardboardy stuff. I saw these at the Dallas Museum of Art store and thought, how cute that they sell cat stuff. Till I saw the price. Frank Gehry indeed.

Now THAT is one heck of a cat scratcher!

I wonder if this applies at all to people who obsessively watch cats on the internet.

I think it does!

You’re always saying how you kiss the kittens – check this out!

Even though this video has more d*g video than cat, it made me laugh

(You can fast-forward through the puppy bits if you are not a d*g fan – you get the idea in 10 seconds, which is about the length of the entire cat portion. Cats do it faster!) …Or is it a definitive (and affirmative) answer to the “Ruth: Tri-Color Or Not?” question?

I know you know this already, but just in case someone else was wondering – that’s Ember underneath Ruth. I stand by my statement that Ruth is a brown tabby – and Cydney, who is another Challenger’s House fosterer who has actually seen Ruth in person agrees that what insists on being photographed as orange on Ruth’s head is actually a caramel-ish brown.

(Whatever colors Ruth is, she is certainly one adorable girl, isn’t she?)

By the way, not sure if you saw this or I missed it when you posted it… Cats Beavers and Ducks has Jareth…. (this may be old news and (again) I’m late to the party!!!

Isn’t that awesome? Cats, Beavers & Ducks is a great site – when I’m stressed out and need a few minutes to just chill and be happy, that’s where I go. 🙂

I’m surprised your house isn’t littered with boxes for the kittens and cats!

The number of boxes in the house waxes and wanes. I usually have at least one box in the kitchen, and sometimes another couple in the front room. But someone likes to spray the side of boxes (and it’s ALWAYS after I’ve thought to myself “Oh, no one’s sprayed that box. Maybe no one will!”), so I keep the number at a minimum. But when I’ve gotten a lot of stuff in the mail and don’t feel like carting the boxes out to the garage, I let them pile up in the kitchen. The cats think they’re great at first, but after a few days they start ignoring them, and that’s when I break them down and put them in the garage (which is the resting point before I visit the recycling center).

And that picture of Sugarbutt wishing he could teleport outside is so perfect. What kind of birds do you usually get that drive the cats so crazy? 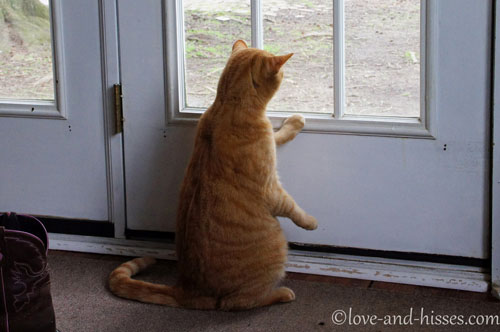 We get all kinds of birds, but right now it’s mostly Blue Jays. There are also Robins and Woodpeckers and Mockingbirds, and in the winter we get a ton of Chickadees. We’ll get a bunch of hummingbirds in August, which I’m really looking forward to!

I started following you a little over a year ago, in time for the announcement of the Noms… my first view was Emmy’s “Aliens in There” video. I realized that Mr. Stompers arrived about a year ago so every day, yes don’t miss one, I check out that little ‘Monkey’ as you fondly called him! Can you remind me the post date recently of his 1 year old picture? Thanks!

The most recent picture of Stompers was on March 11th – the third picture down in this entry. It just kills me dead that he’s still got that same sweet Stompers face! I love this picture so, so very much. You can see that Scorch’s eyes are changing color from the pupil outward (so are Puff’s, for that matter.) “Am trying to eat, here, lady.” Ruth, Ember, and the Norbs, crammed into the cat tree condo. Khaleesi, hangin’ out with her boy. She cracks me up because she looks so PUZZLED here. “Is he… biting my belly? How very odd!” She’s a tiny girl, but she knows how to stand up for herself! Cap’n Puff, sailing that scratcher across the floor. “Ahoy!” Ember doesn’t miss a thing that’s going on. I think she’s got a secret blog somewhere, where she reports how many times her brothers bit her on the butt and how Khaleesi is so mean for not letting them nurse 24/7. Ruth, showing that baby sock monkey who the boss is. Norbert pondered whether he could make the jump from the cheese scratcher to the bucket o’ toys. In the end, he opted to turn around and walk down the scratcher. That poor sock monkey, he certainly takes some abuse.

Yesterday I took the Dragons to the vet. We knew that Puff, Scorch, Ruth, and Ember were negative for Feline Leukemia and FIV since Khaleesi was, but I wanted to make sure that Norbert was, too. As expected, all the tests came back negative. Yay!

They were so quiet and well-behaved on the trip to and from the vet. I heard the occasional quiet meow, but for the most part they curled up together and fell asleep. This toy is hanging off the closet in my room and every now and then someone rediscovers it and thinks it’s AWESOME. The spotted belly, before the spaying. I guess she was snoring. Here’s a closeup of the spay scar and the tattoo that the spay/neuter clinic does on (I think) all the cats and dogs they spay and neuter. Both the tattoo and the spay scar are really quite small. “Aslan’s laying ON TOP OF meeeee, make him stooooooop!”

The Royals will be with us for most of the day – I’m taking them to Petsmart this evening, at the beginning of adoption hours. I suspect they’ll be a little freaked out, but I also suspect they’ll adjust pretty quickly. They’re very friendly kittens; in fact, we had an inspector at the house yesterday (checking our new air unit, which we had installed in April) and they followed him around and howled for attention. I wouldn’t be terribly surprised if half of them go tonight and tomorrow! What doin’, Corbs?
“Just reflecting on the fact that I continue to be the MOST beautiful cat at Crooked Acres and always will be.”
So true.