Have the Permanent Residents figured out that something is going on?

They know SOMEthing is going on, but have no idea what. Archie and Charlie like that the foster room is empty and available to them and Jake wanders through every once in a while, but I’m not even sure Newt, Dewey, Alice and Khal have been upstairs since the fosters left.

Should we start thinking of names for the new place or do you already have one? Is the house bigger or smaller than this one?

I have a name in mind, but I want to wait ’til we actually live there so I can decide if it fits!

The new house is slightly smaller than this one – we won’t have a guest bedroom, but we weren’t using the guest bedroom here very much anyway (and when people come to visit, we can certainly make room!)

Will there be some new chickens too?

Will there be chickens? (Just kidding.)

There WILL be chickens – but not as many as we had at Crooked Acres, probably around a dozen. (Famous last words, right?)

Oh that’s great news! Congratulations!! I for one, (being the weirdo that I am) LOVE packing and organizing. Like Monica Geller level love. (Remember when Rachel was moving out and hadn’t packed her stuff, so she made it look like she was saving the packing for Monica to do as a going away present? And Monica was so excited? Yup! That’s me!)

Well you come right on over here and sit next to me!

What will you be doing with the extra land, though? More room for cats? Or?

You better get those permanent residents to work packing their things! Cats are such good helpers! 😉

So far they’re mostly ignoring me, though Charlie comes and watches me for a minute then runs away. (This makes me think of our dear departed Tom Cullen who haaated it when I used tape. He always chattered at me and then ran from me when I was pulling tape off the roll.)

Sounds wonderful but the new owners may want to keep the cat fence, if I’d have known about it, I would’ve gotten it. And it’s already installed, bonus.

The house won’t go on the market ’til after we and the cat fence have moved out, so I don’t know how they’d know that there was a cat fence that they could have had.

I feel you on the “we’ll do this next year” and starting to lay groundwork immediately and suddenly things roll much faster than you planned. I may or may not do that all the time myself!

We did that exact thing when we were at Crooked Acres – our initial plan was to start thinking about putting the house on the market in 2018, but we immediately started looking, we happened to drive by a house that was for sale while an open house was going on, we went in and talked to the realtor, and then things started rolling from there. (That isn’t the house we bought, but that’s the realtor we used!)

Is this your most far-flung litter (Seattle, Arizona, West Virginia)?

I think so! We’ve had kittens go to Oregon, but Seattle’s as far as you can get from Huntsville without leaving the contiguous United States. (Note: it is my goal, during this foster-free time, to get a clickable map up and running so we can see just where Love & Hisses kittens have gone!)

Here are a very few pictures of the new house – all taken by Fred. There aren’t more pictures because the owners are still living there and I didn’t want to post anything that felt intrusive. Once we’ve closed on the house, there will be more pictures! 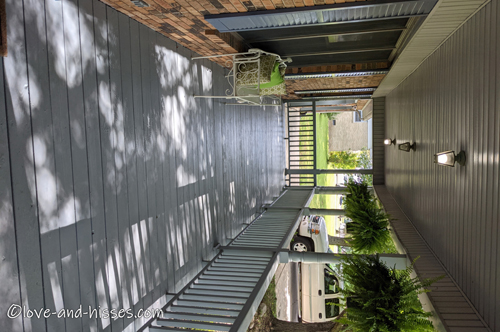 The front porch. Lovely, huge… and I’m already pushing to screen it in so that the cats can go out there. 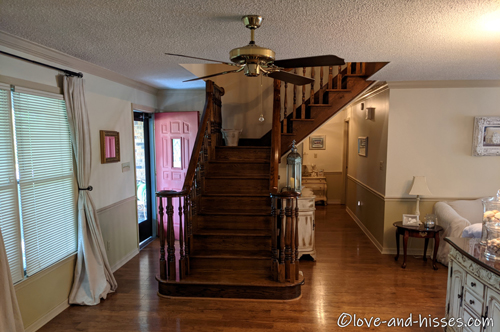 The great room – front door to the left, dining room (which will be the computer room) behind where Fred was standing, to the right is the living room, and further to the right is the screened porch. Down that hall is the master bedroom and a small bedroom (that will be Fred’s office; he works from home if you didn’t know that). Also, may I point out that amazing staircase? I can’t wait to go up and down those stairs 75 million times with boxes once we’ve moved. 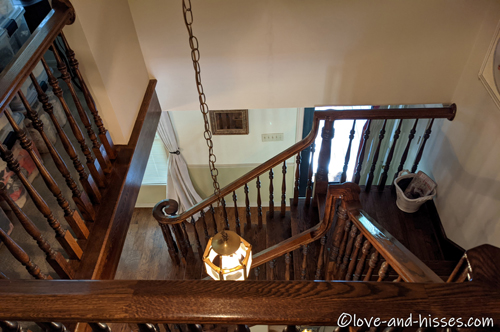 Another shot of the stairs. 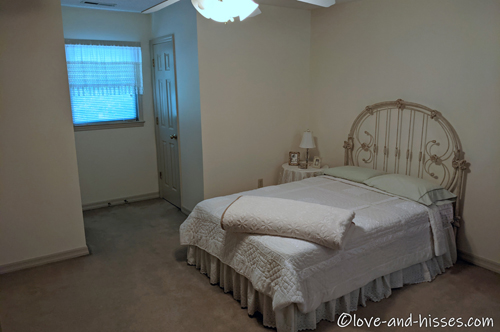 This is the room that will be the foster room. There are TWO closets over by that window. 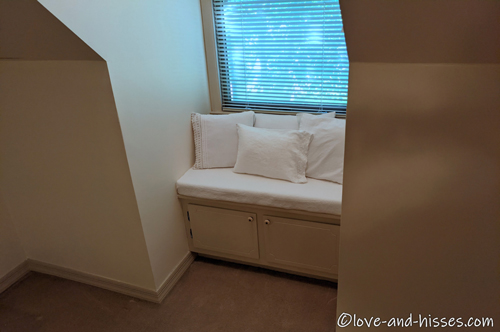 Love the built-in seat (so will the fosters!) 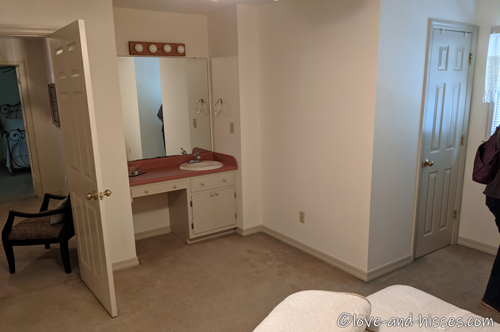 There’s the sink/vanity! 1 million kitten butts will be washed in that sink, I’m sure.

Yes, there’s carpet in the foster room. We will be replacing that – in a perfect world, before we move in. We’ve ordered the flooring and are waiting for it to reach the store so that we can schedule the installation. We have about a week between closing on the house and moving in, and are hoping and praying it works out right. (If they have to do it after we’ve moved in that’ll be a pain, but it has to happen – I’m not doing carpeting in a foster room.) There’s also carpet downstairs (in the master bedroom and Fred’s office) that will need to be replaced with laminate also, but that will happen later on. (Also depending on how that week goes, I may try to paint the foster room a color that’s a bit less neutral.) 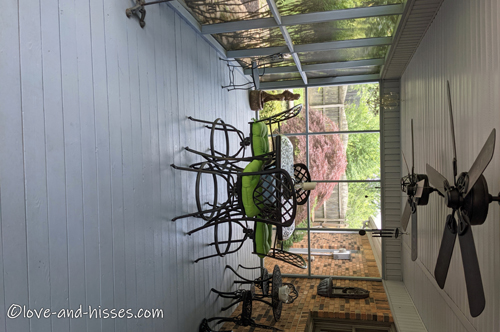 The screened porch in the back. 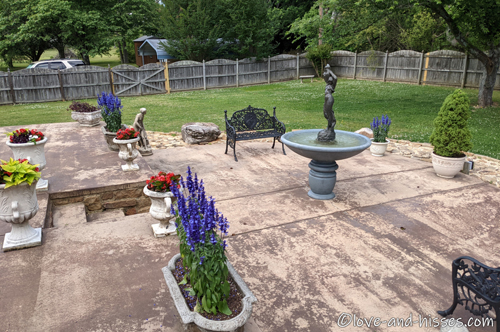 The back yard! That fountain is leaving with the owners – I assume the concrete planters will be going with them as well, but I’m not sure. Beyond the fence, where that vehicle is parked, is the other half of our property. It’s not fenced in currently, but the fence around the entire back yard will need to be replaced in the next few years (it’s in rough shape), so I’m hoping Fred can be convinced that we need to extend the fence. I’d like to see it around that entire side yard, personally. 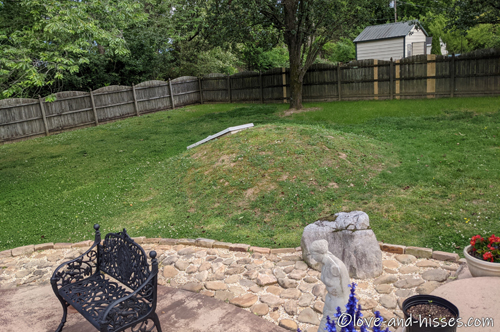 That’s an in-ground tornado shelter, which Fred is thrilled about. I don’t know WHY he’s so thrilled about it, I’d like to remind y’all that when the EF5 tornado crossed by about a mile south of Crooked Acres in April 2011, I was hiding in the hall closet and Fred was standing on the front porch yelling “Come look at this!” 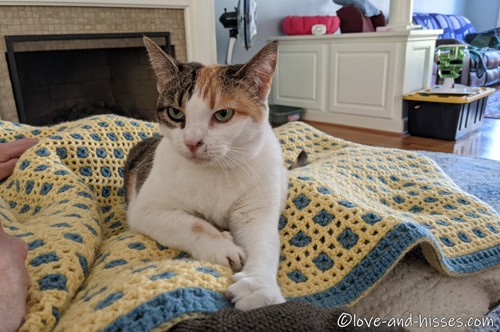 Alice Mo the calico will go wherever her Daddy is, yo.