Wednesday evening, I was going around the house gathering up trash (Thursdays are garbage day here – mark your calendars with that fascinating bit of info!) and Fred came rushing into the house.

“In the culvert under the road!”

I dropped the bag of trash I was holding and went out the door. He was behind me a moment later with two flashlights in hand. As we approached the ditch at the side of our property I could hear the very loud meows of a scared kitten. Fred went to the mouth of the culvert, leaned down, and looked in.

“No, the culvert kind of bends. I’m going to go to the other side of the road.”

As he headed across the road, I fought my way down to the mouth of the culvert.

(That thing is so overgrown. SOMEONE ought to do something about that, don’t you think? I took MY turn three years ago, I think it’s Fred’s turn!)

I got onto my knees and looked in, and as I did, Fred leaned down at the other end of the culvert and we both shone our flashlights into the culvert to see one scared looking little kitten. Every time a car went over the culvert, the poor thing howled louder. And then he’d occasionally howl just to let us know he was scared.

He had one loud voice, that kitten.

I called, but the kitten just sat there and howled.

Fred tossed pebbles at the kitten in an attempt to scare him into running out my end of the culvert. The kitten just sat there and howled.

I was starting to worry that he’d been hit by a car and dragged himself into the culvert and was laying there, paralyzed.

“Would water work?” Fred suggested. I told him I thought it couldn’t hurt, so he went to the house, and I stayed and talked and called to the kitten. I wanted and was willing to crawl in to get him if need be, but I had a mental image of getting to the kitten, grabbing him, and then getting stuck. The fire department would have to come out and tie something to my feet to drag me out.

Ten bucks says I would have made the news if that had happened.

He came back with a bucket of water, and dumped it into the culvert. The kitten gave me a look like “Really? My life’s not hard enough, now you’re going to drown me?”, howled even louder, and then finally ran toward me. 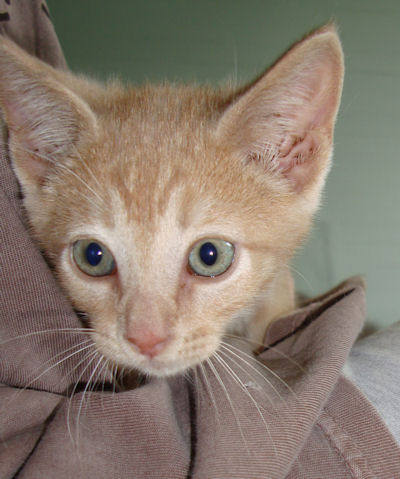 (“Lieu” is short for “Lieutenant” – we couldn’t think of a better “Rescue Me” name, although Fred suggested “Probie.”)

I’m guesstimating him to be around the age of the Rescuees, and since he tested negative yesterday morning at the vet (THANK GOD), he’s joining the Rescuee litter. I introduced him to the rest of the litter, and there’s been some hissing and smacking, but overall it’s going well.

He’s a perfectly healthy kitten. He had a couple of fleas on him, but otherwise he’s fine. He wasn’t starving, not skin and bones.

What I’m saying is that there is NO WAY this kitten wandered off from a feral litter. He’s scared and a little skittish, but he’s not feral. Fred talked to some neighbors, and learned that the corner across the street from our house is a place where cats and dogs are often dropped off. There’s a big field across the street, and I’m sure idiots believe the animal they’re abandoning will run free and happy and live long lives. Instead of, you know, wandering out in the road to be hit or out into the field to starve to death or be attacked and killed by predators.

I won’t go off into a rant, though (too late!), I’ll just tell you that Lieu and the rest of the Rescuees are off to be spayed and neutered next Thursday! 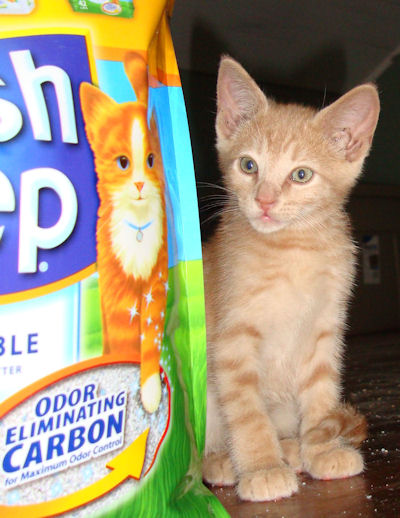 Mocking the Fresh Step cat. “Do I look vapid enough?” 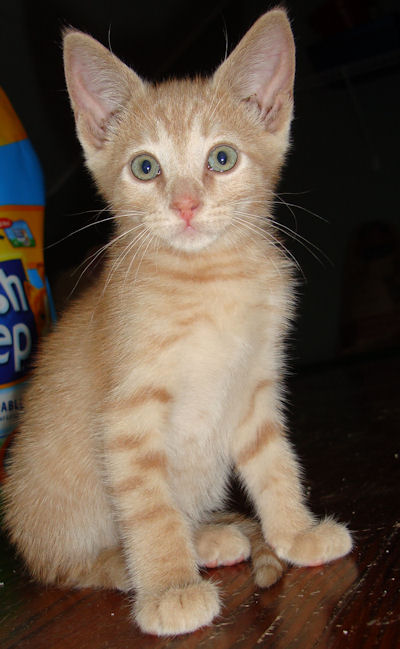 Now if you’ll pardon me, I’m back on hiatus ’til Monday. I have kittens to snuggle, y’know!