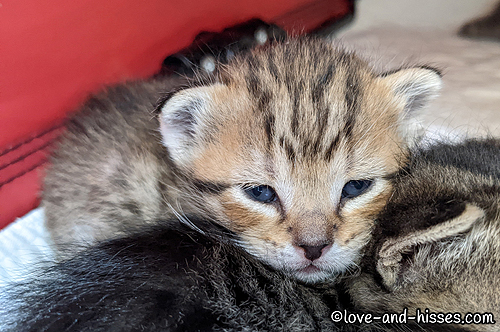 Clover’s got both eyes on me. 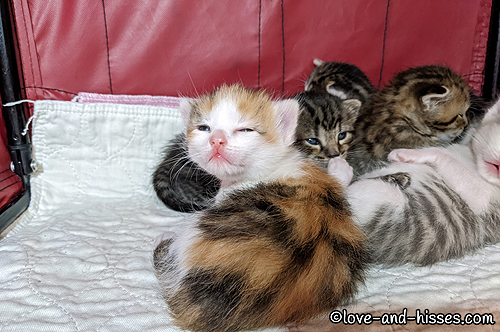 I love Hollyhock’s “How YOU doin’?” face. Also, Mondo in the background sniffing Kudzu’s foot is killing me. 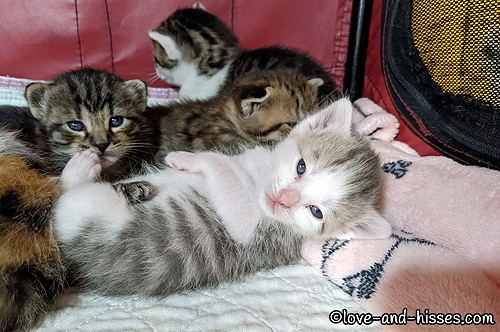 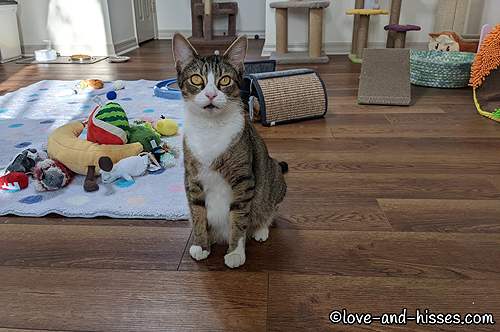 Mimosa’s all “You’re watching them, right?” Yes ma’am I am!

Did you notice the change in location? Saturday afternoon I moved the kittens into the crate. Although the doors to the cabinet stayed closed unless I was in the room, I could just imagine a kitten following Mimosa out the cabinet door and tumbling the 3 inches to the thick layer of towels and blankets there. There, of course, are ways to deal with that (I considered putting a piece of wood across the bottom of the cabinet so that they would have to climb over it, and believe me they’re not coordinated enough to climb just yet), but I thought I’d move them and see if Mimosa would be okay with the move.

I half expected to find the kittens moved back to the cabinet yesterday morning, but nope. Mimosa just shrugged and said “Whatever.”

The kittens pretty well took it in stride, too. I covered the crate with a blanket to keep it dark, but when I go into the room I move the blanket out of the way so I can see them, and they’ve all made trips to the front of the crate to see what’s what. 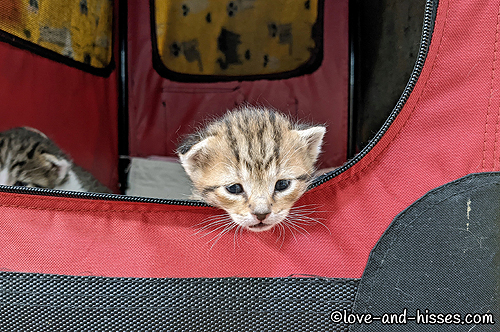 Clover took a look at the floor. 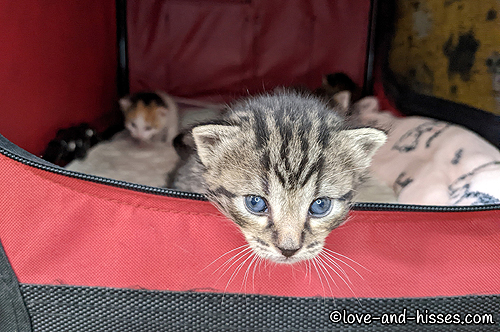 Mondo took a look at me. 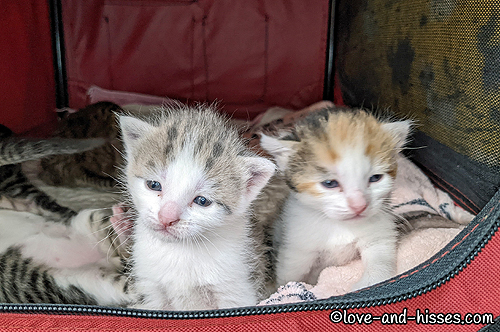 Kudzu and Hollyhock said “Hmph. There’s nothing out there worth seeing!” 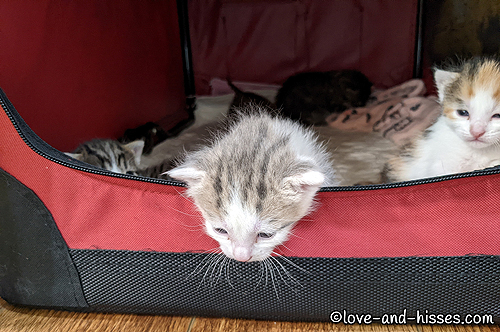 Kudzu said “Plus, it’s a long way down!” 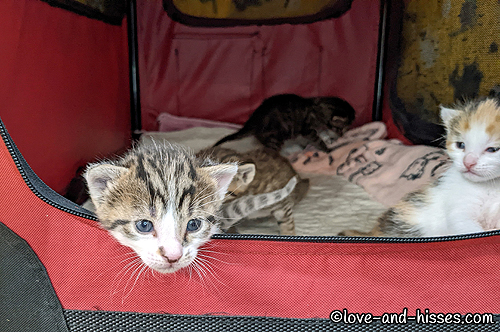 And Bramble said “Okay, cool view. But I’ll stay in here.” (I love how in the last picture and this one, Hollyhock is keeping an eye on her brothers.)

It probably won’t be a SUPER long amount of time before the kittens figure out how to escape the crate, but I think we’ve got a little time yet. They’re only 2 1/2 weeks old, after all. (A quick look back to last year’s litter shows that the Cardsharks started leaving the crate at about 3 1/2 weeks.) 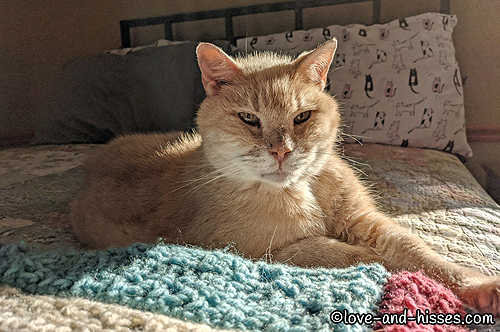 Newt is enjoying the sunshine. 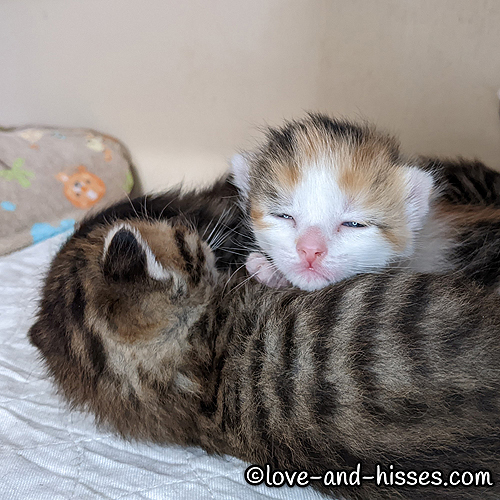 Hollyhock’s all “Go away, we is sleepin’ in, lady.” 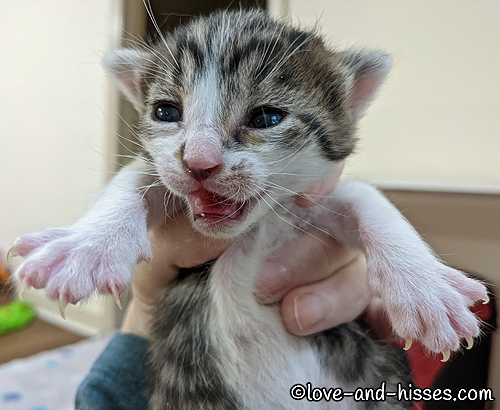 Did you know that kittens are not able to retract their claws until they’re about 4 weeks old? So when they’re waving their little razors around, they’re not threatening us, they just can’t sheathe those weapons. It’s believed that the claws aid in stimulating milk production. (I usually start trimming claws once they can retract them, and try to trim them regularly, though I’m not as consistent with it as I should be.)

YouTube link
These kittens are just sleepy little muffins. So many YAWNS. It’s a rough life, is what it is. 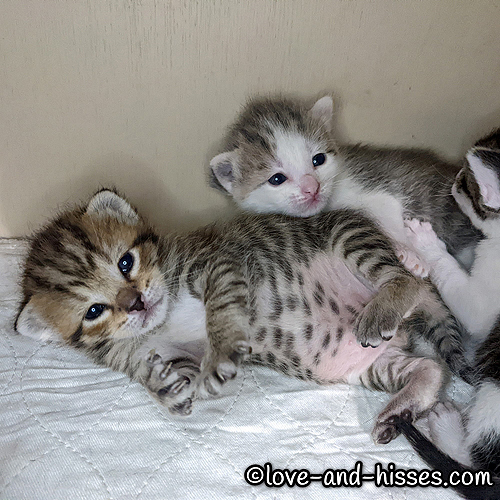 Oh dear, would you LOOK at the delightful spots on Clover’s belly??

YouTube link
Look at how excited they get when they hear/see her! 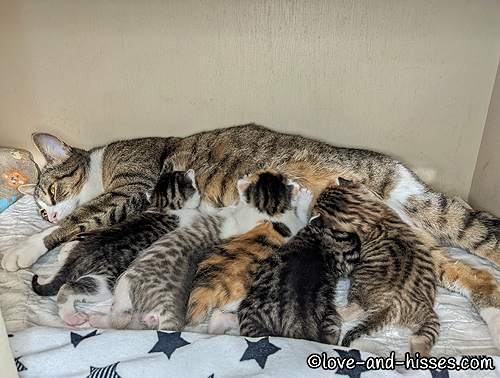 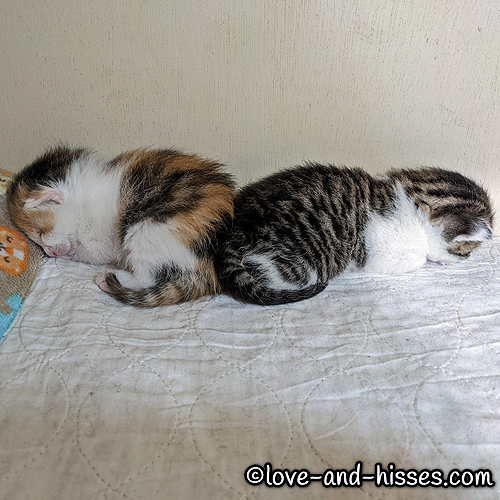 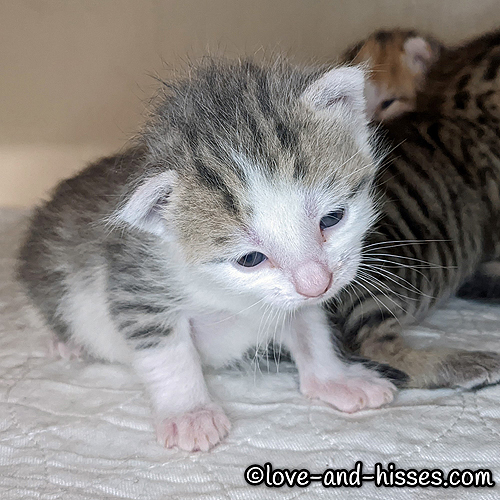 Kudzu is thinking real hard about something!

YouTube link
Everyone else is at the milk bar, but Hollyhock is rolling around on her back feelin’ good. She is just SO SO CUTE. 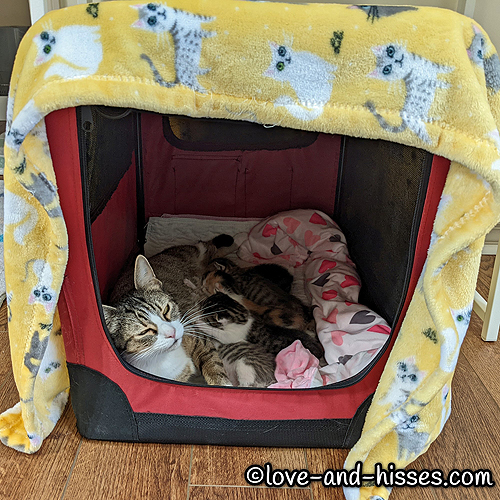 Good night innernets. (Mimosa doesn’t seem to mind the move to the crate at all.) 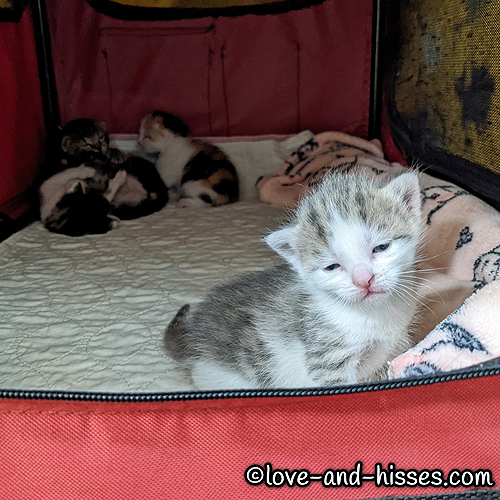 I am just totally shocked (NOT) that Kudzu was the first kitten to toddle to the front of the crate and take a look at what’s out here. (He found it lacking and toddled back to the back of the crate to join his siblings. That will change over the next week or so… BOY will it change!)

YouTube link
A closeup view of the milk bar. (I moved the kittens to the crate yesterday because I thought it was time. I half expected Mimosa to move them back to the cabinet overnight, but Mimosa just shrugged and said “I guess we live here now, kids.”) 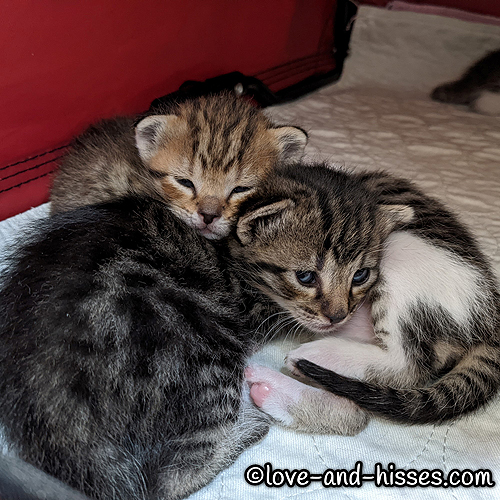 I love how you can see the difference in Clover’s red-brown coloring compared to Mondo’s dark-brown. (Also, that is Bramble’s brown tabby and white body; his head is somewhere under Mondo, I think.)

YouTube link
The kittens have reached the stage where they like to roll around on their backs and kick their little legs in the air and just plain look adorable. Seriously, they are the CUTEST. 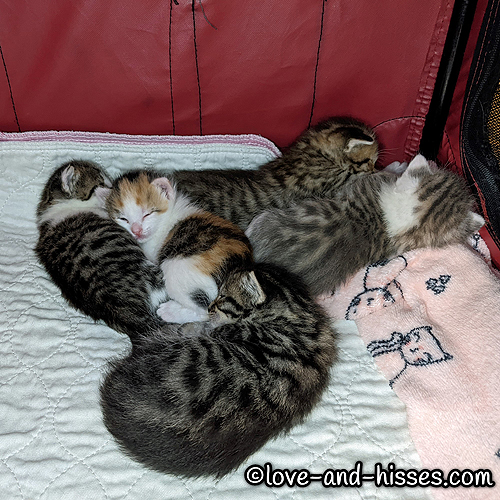