Can you recommend any plushy toys that are not Squeaky/electric and do NOT HAVE CATNIP? We had a nice snake that the girls loved and it got shredded!

I told Julie the only kind of toy that immediately came to mind was this pack of long-tailed mice I got from Amazon last year – they don’t have catnip in them, and Jake LOVES them. I’m certain there are other plush-type toys that don’t have catnip, but my mind is blank at the moment – anyone out there got suggestions? Please chime in!

I know you know what you are doing, but please spend extra time with Carli & Ruthy if they are skittish. I have a 3 year old that to this day will not let me hold her. I got her at 8 weeks and she loves me to death. Follows me around the house to the point of almost being annoying. Loves belly rubs and she has to be brushed everyday. If I don’t she can be quite vocal. She just won’t let me pick her up or hold her. Last time she had to go to the vet I was a bloody mess. I wouldn’t trade her for a million dollars, but some people wouldn’t like that.

Yep, they’re getting extra time and attention; we’re handling them as much as we can. Carli is definitely coming around (she climbed into my lap yesterday); I may have to step it up a bit with Ruthy, though.

Is Ozzy the exception to the typical ornj laid-back surfer dude, or has he just seemed more zoomy because in contrast, his particular set of siblings has been (understandably) more reticent than foster-room-born kittens?

Oh, he’s actually pretty laid-back and SO very confident. They still have so much energy at this age; I think he’ll chill out as he gets older (when he’s not zooming around, he does chill out in my lap; he’s going to make a good lapcat for someone, for sure.)

Has a name formed for the new digs, yet? The Breezy Bunker?

I’ve been calling it Crooked Acre (no “s”) since it’s definitely crooked (the floors are a bit uneven) and it’s just the one acre!

Every time you post a picture of the elusive Dewey, I repeat in my head the old joke, “The law firm of Dewey, Cheatem and Howe.”

That would be an excellent naming theme for a trio of kittens! 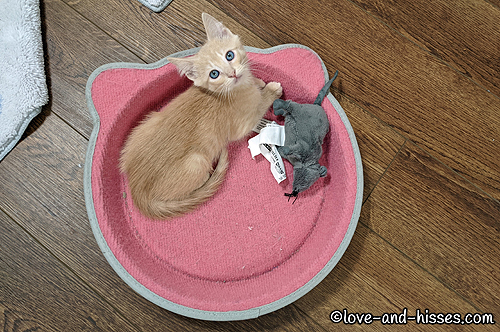 It’s a Sammy pie. With an Ikea Rattie garnish! 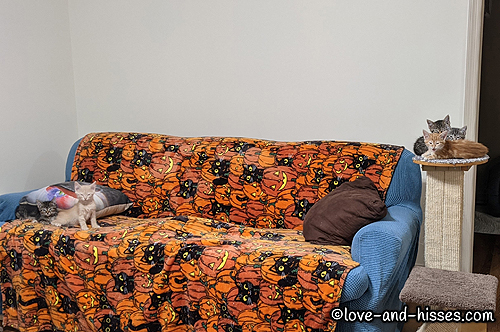 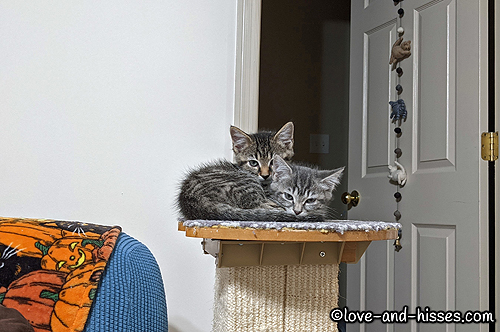 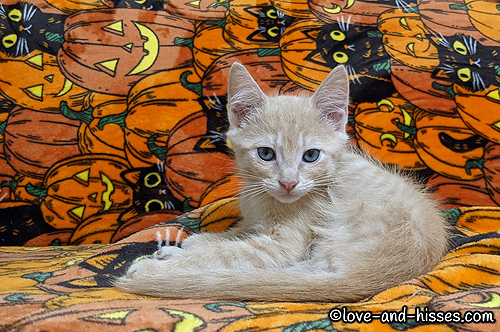 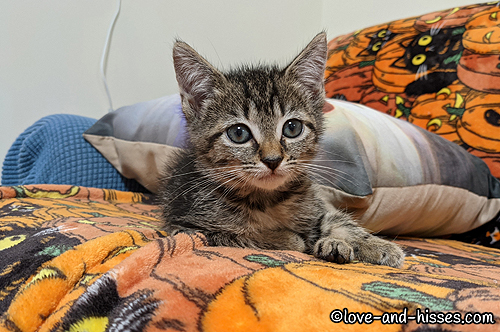 Nikki’s eyes are a gorgeous shade of blue-green right now (and no, I don’t think they’re done changing.) 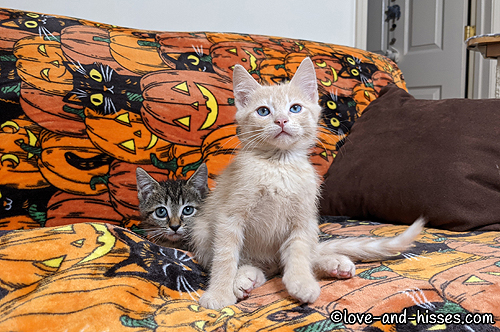 Sammy’s all “What you want, lady?” 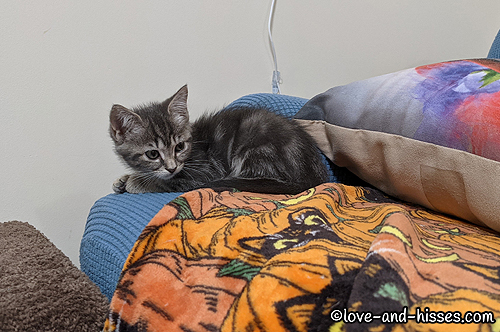 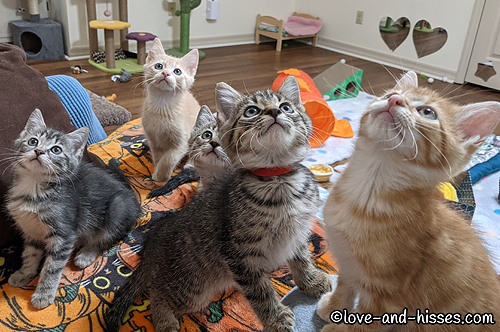 There might’ve been a feather teaser up there. 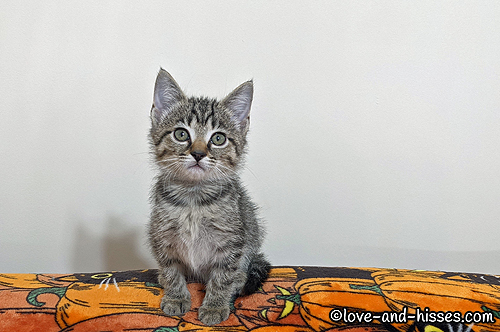 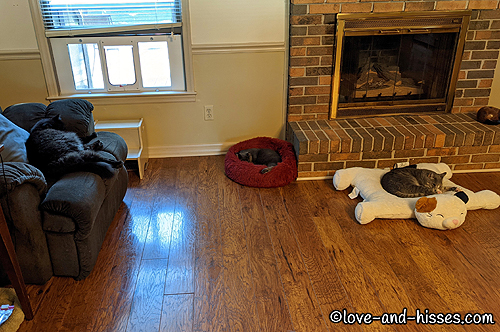 The weather has (FINALLY) turned cooler and so Khal (left, on the recliner), Jake (in the red bed on the floor) and Archie (on the cat pillow in front of the fireplace) are staying warm inside. 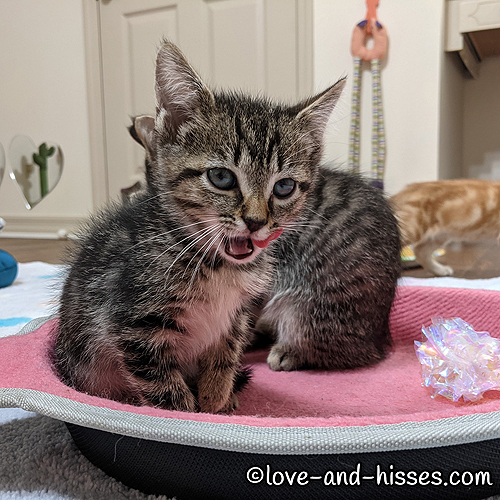 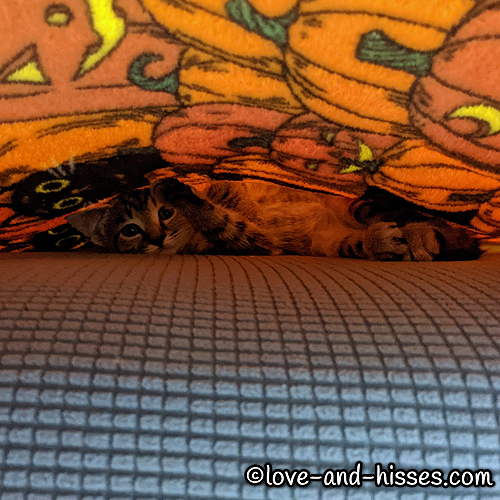 Nope, no Ruthy under THIS blanket!

YouTube link
Throw Back Thursday: this video is from February of this year, when Canasta was still pregnant (we had another 10 days or so before she gave birth). I had no idea I was even making a video (I was taking pictures.) The end, where I lift her down off the shelf CRACKS ME UP. Her calm, curious little face as I lift her down – CAREFUL NOT TO PUT PRESSURE ON HER BELLY – and her little feet and that big ol’ belly and my GROAN as I lift her entire weight is killing me. So much that I had to add it in again in slow motion at the end.

YouTube link
Franco Fondue – Molly Marinara’s kitten, orange and white with a narrow strip of white up his forehead – was adopted a few days ago and joined a home that includes kitty sister Miso. He’ll be known as Fondue in his new home. Here’s the video where you can see him grow while we fostered him. 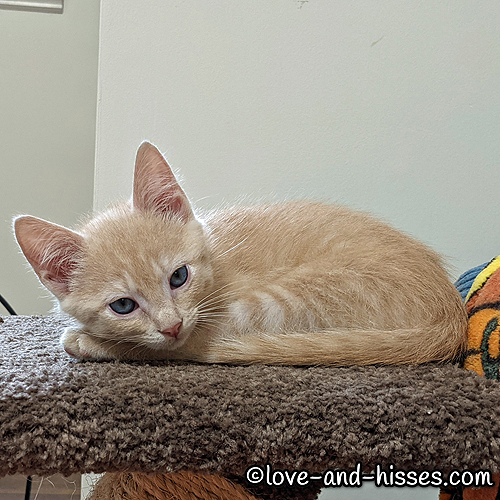 Previously
2020: Have I mentioned that Davy Crockett’s intense little face kills me? It really does.
2019: Then mid-morning Beauregard came trotting downstairs with the toy stick of butter in his mouth, dropped it on the floor, and settled in on the bed.
2018: Innernets, would you please give a warm welcome to LoJack?
2017: Breakfast at the Milk Bar Cafe.
2016: Chesnee approved the durability of these clumps.
2015: Stefan and the terrible, horrible, no-good, very rough life.
2014: Ralph, practicing his Crazy Eyes.
2013: “I don’t NEED to be tutored, because I am already the smartest boy ever!”
2012: You wish you had my glamorous life.
2011: No entry.
2010:I love the way Reacher and Corbett are basically the same pattern, in different colors.
2009: My poor babies.
2008: And if not, I can always buy their love with a plate of chicken baby food.
2007: Best. Picture. EVER.
2006: No entry.
2005: No entry.