Catnip is in the mint family of plants and it’s really hardy and prolific! Another plant it’s closely related to is Catmint (Nepeta), which get beautiful purple flowers if you’re looking for something pretty to plant. My stray cat “backyard buddies” love the catmint as much as catnip!

I have actually been thinking about catmint! We’re getting our new fence next week, which means that once the weather warms up (and dries out) a bit, I’m going to start planting things along the fence line, and catmint’s at the top of the list.

Looks like 9 seats at the milk bar in the belly moving video? She seems wider every day 🙂

Yep, there are 9 seats at the milk bar (which does not indicate that there will be 9 kittens!)

I see that back in 2012, there was also a case of pictures doing “no justice to the size of the belleh” — Emmy!

Pictures doing no justice to the size of the belly is definitely a recurring theme here!

When I first saw the picture with the avocado next to Mimosa, I thought you were insinuating something about her shape! =^..^= 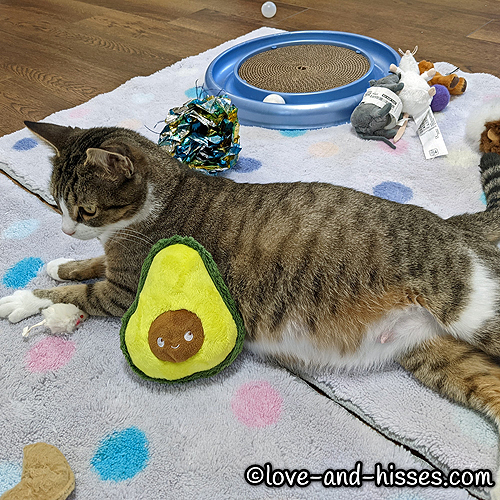 At one point last week I looked at Mimosa and thought “That girl looks like a potato with legs.” You have no idea how much time I spent searching for a potato toy that I could use to point out the similarities! (The only reason I didn’t buy one is because I was sure she’d have those kittens annnnnnyyyyyy time, HA HA.)

When will you be doing another of the side-by-side baby bump comparisons again?

Scroll down to the social media section, there’s a new comparison picture. I do it once a week (and I am telling you… I really hope there are kittens before it’s time for another belly pic!) 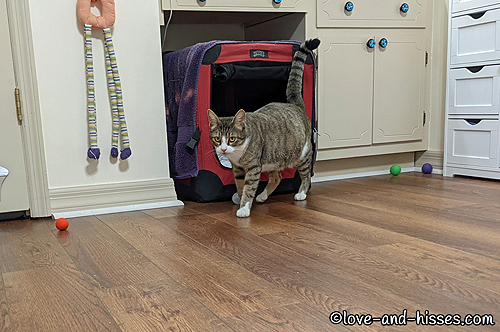 She went over to look into the crate and then walked away. She likes to get me all excited that she might be “nesting.” (Which is silly, because I’ve had cats who never once even looked at the crate before they went into labor.) 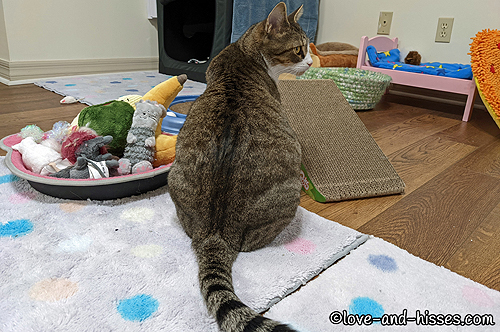 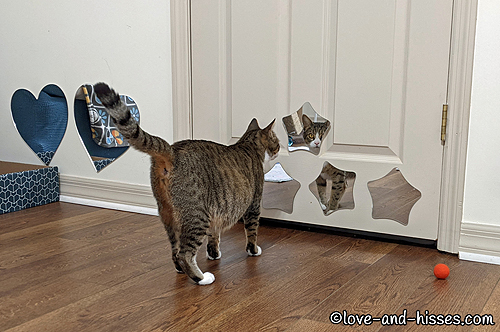 Are we gonna get kittens TODAY? Tomorrow? This weekend? EVER? Who knows?! Not me!

(I will keep you updated, of course.) 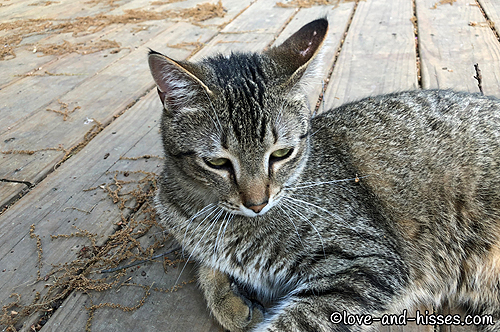 An old picture of Dewey so y’all don’t forget what a pretty boy he is. 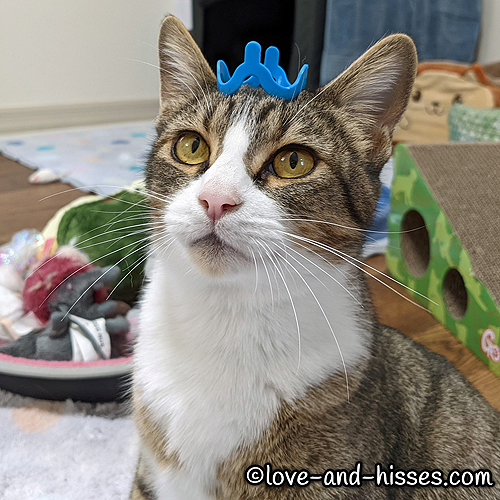 Queen Mimosa decrees: “No kittens for you!” 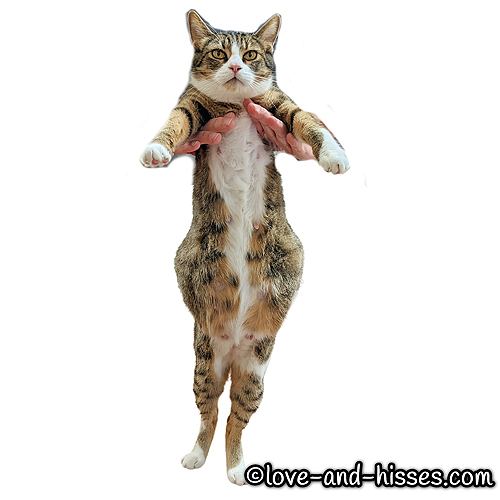 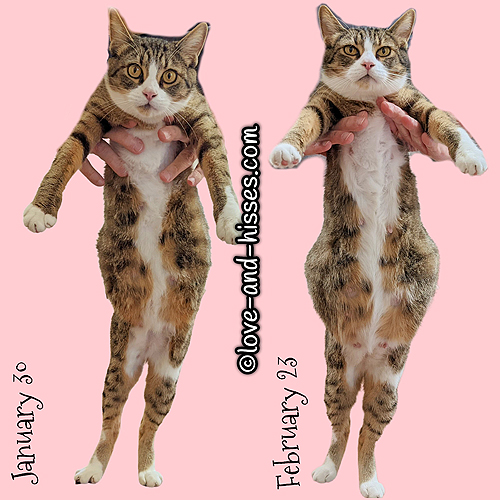 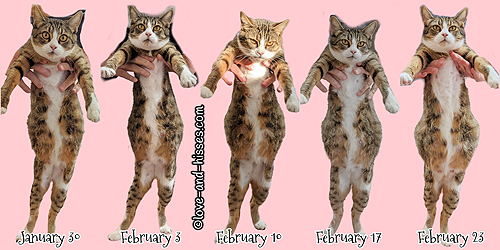 Mimosa belly pics! First pic: what the belly looks like now. Second pic: the belly on January 30th next to the belly on February 23rd. Third pic: the weekly progression. I would say those babies have dropped. I would also say I AM READY FOR KITTENS. (Also: no, I am not worried. No, I am not taking her for another ultrasound. She’s fine, the kittens will come when they’re ready.) 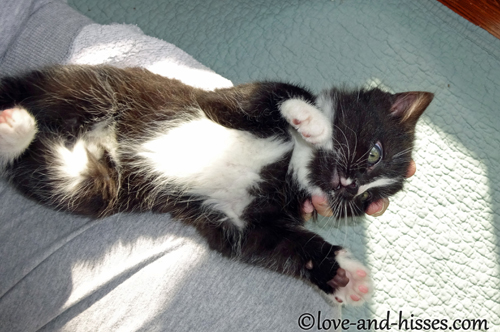 Throw Back Thursday: Paul from 2015. I proclaimed that I’d never had a “rare diamond-bellied tuxie” before, and a surprising number of people were unsure whether I was joking (I was.)

YouTube link
Mimosa and the belly rub and the biscuits. She is one happy, happy girl. 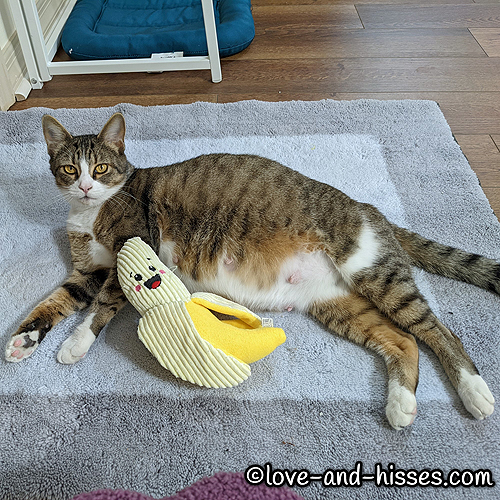 Note: Keep in mind that although she’s gotten big and we’re anxious for kittens, the bottom line is that we’ve had her for 28 days, the vet could only say for certain that she was 30 days along, and that means she could be just 58 days along. A cat’s gestation period is 58 – 67 days (says Wikipedia), so it could be any day now, and it could also be another week. (I don’t want it to be another week, of course, but we all know I don’t get a say in the matter!)(PS: Fred says “She doesn’t look miserable enough yet.”) 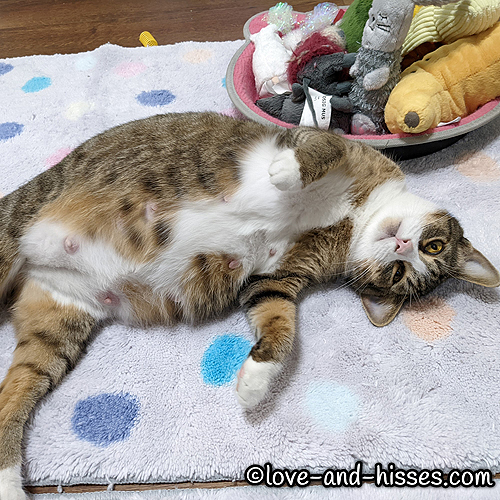