I have learned a lot watching your groups of babies this year. I had no idea a dad would help raise babies, for example, or that batches of kittens and their two different mothers/aunts would work. I always thought the mother and her babies would be totally separate from other cats. Maybe it’s the babies that make this work? I have had from 2-4 cats in my house over the years and it’s been rare when even 2 of them would get along.

I’m learning as I go along, honestly. I worried about Charles and Caroline (because you hear so many horror stories about what male cats might do to kittens) and I worried about whether Margeaux and Katriane would get along. It’s all worked out well, and I wish I knew why – as far as I know, Katriane and Margeaux didn’t know each other before this – but I think I’ve just flat-out been lucky. With kittens, you just kind of toss them together and let them work it out. I wouldn’t necessarily do the same with adults, but like I said – I’ve been lucky with these two!

In at least two different recent videos, if not three, someone has been trilling in the background. It’s this super adorable, high-pitched, happy, musical ascending purrrrow?! Who is that? Is it the same kitty every time? The trilly chirper makes me squee whenever I hear them!

It’s Katriane. She’s got a lot to say, and she says it a lot (and she is very very sweet!) When she’s going into heat (or is IN heat), she gets even more vocal.

Makes me wonder if the older kids nursing on Margeaux, helped stimulate her into labor?

I wondered that myself!

Can the little ones deplete Margeaux to a point where she wouldn’t have enough for the newbies to come? I hope not, but her bodily fluids are finite.

I worried about that too, and kept pulling the kittens away from Margeaux and checking, but I think she wasn’t actually producing anything until after her kittens were born (or maybe started producing colostrum when she was giving birth? I’m not entirely sure how that works.) Since her kittens were born, I’ve been keeping an eye on the crate, and her kittens nurse frequently – and the big kittens aren’t trying to muscle their way up to the milk bar, which I was concerned about. Since Margeaux was with us for 6 weeks before she gave birth, and was eating a LOT for the past couple of weeks, she’s got some stores to draw from, so I expect her kittens to chunk up pretty quickly.

Amelie is still so tiny…is she doing okay?

She’s doing great. She’s 1 3/4 pounds now, the same weight as Madeline. She plays like a normal kitten, she’s growing into her belly (or her belly is stretching out), she’s using the litter box without issue. She looks a look runt-y still, with the big head and eyes and skinny legs, but I expect her to continue growing out of that.

Is that an orange spot I see on Margeaux’s back? Is she a torbie?

She does have some orange spots, and yep – she’s a torbie.

Has Katriane stopped calling for her itch to be scratched?

She stopped for about a week, and now she’s back at it. She is now scheduled for her spay next Wednesday, which can’t come soon enough for me!

What is Esmee, a lynx point?

She and Antoine are both lynx points. With Margeaux off eating, I set her kittens on this blanket so I could weigh them and change out the soiled bedding. They started complaining, and Katriane came over to soothe them. 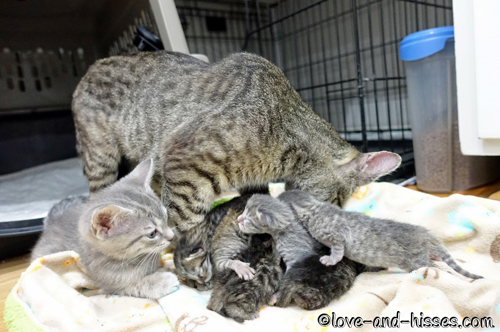 Francois said “What are YOU complaining about? I’m Da BAYbee!” 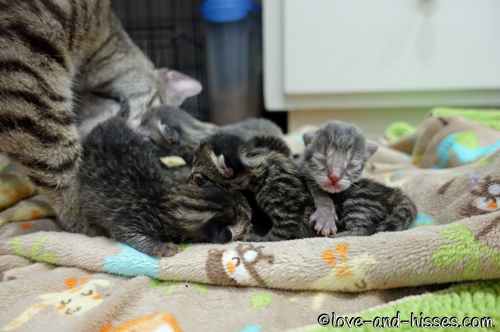 And little Gray said “Boy, have I got news for him!” 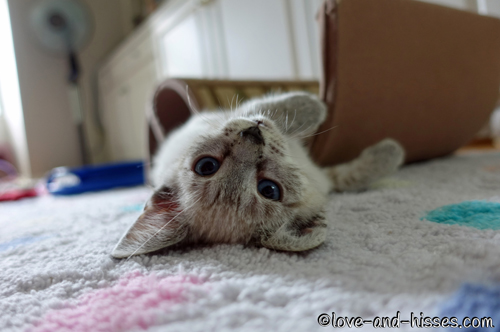 “Those kittens are annoying,” declared Esmee. 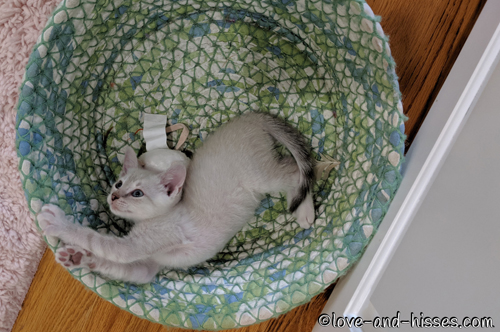 Antoine stretched in his basket and had a think. 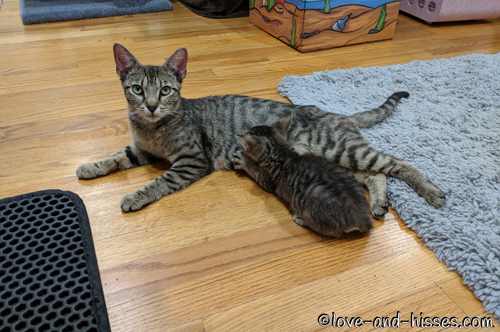 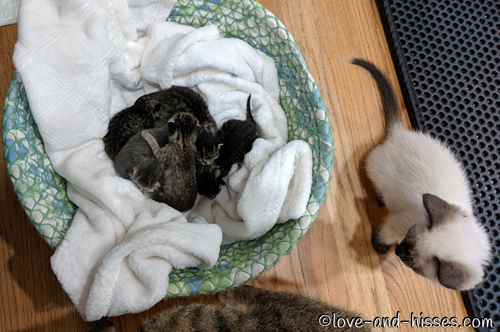 During the evening weigh-in, Jacques came over to see what was going on. 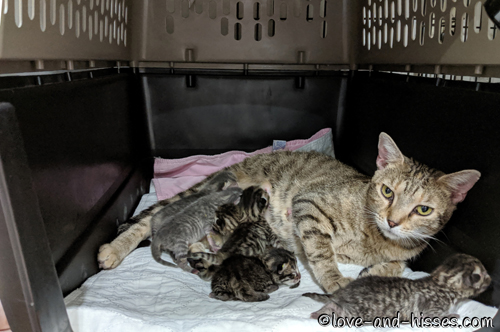 “I don’t like it when you make the babies cry, lady. Do whatever you want to them, just don’t make them CRY.” 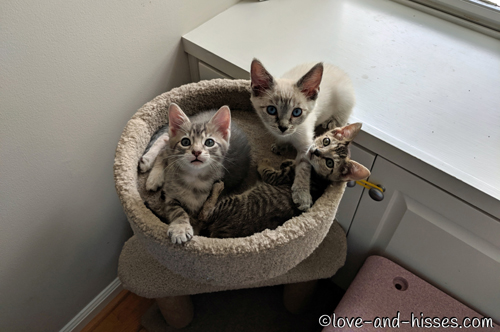 Francois, Esmee and Amelie. They LOVE the top of that little cat tree. 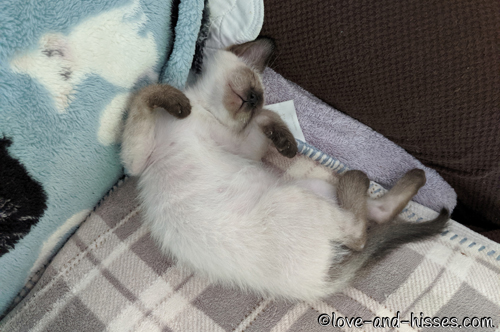 Jacques loves sleeping on the couch. 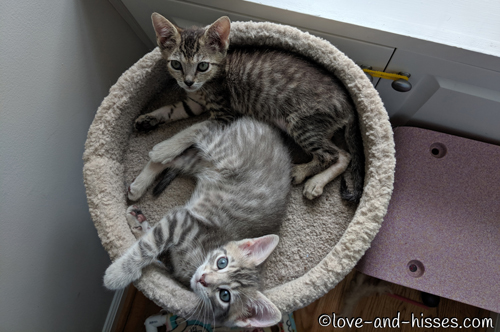 Francois and Amelie in the top of the aforementioned cat tree. 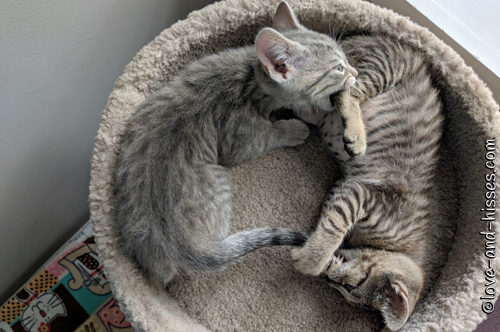 You bite me, I bite you! 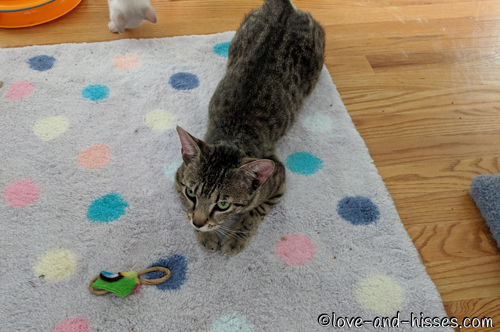 Katriane in heat. It’s gonna be a lonnnng weekend. 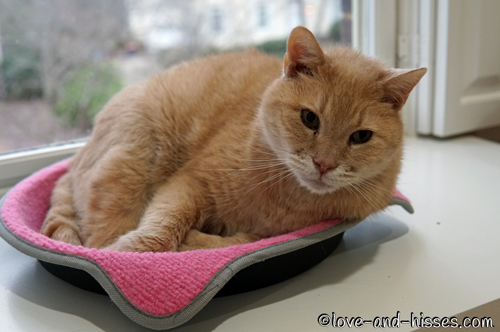 Newt: not a fan of kittens OR cats in heat. Or Archie. It’s a rough life, is what I’m saying.