I saw you had a laptop sitting on the table in the “Nosy Scorch” picture. Do the kittens ever nap on it if it’s been on for a while and all warmed up?

The kittens actually don’t mess with the laptop at all! Of course, now that I said that, it’ll be their #1 favorite place to hang out, right?

What is it about those track ball toys that makes kittens want to sit in the middle? I can’t tell you how many pictures I have with them sitting in there or snoozing in there.

It must be because they fit so perfectly in the center. And now that I’ve said that, I feel duty-bound to repost a couple of my favorite kitten-in-track-ball pictures!

That’s Beulah, from The Seven. And of course Dandelion (now Pearl), one of the Weeds girls.

My favorite thing about the new site design is that the icon for Love and Hisses on my toolbar is a teeny weeny picture of Stompy.

Isn’t that great? I wondered if anyone would notice! That’s a teeny version of this picture: 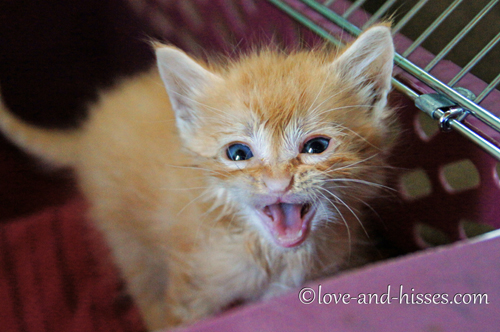 For anyone who hadn’t noticed, I don’t know if it shows up in all browsers – it does in Chrome, that’s all I can say for sure – but up in the toolbar, there should be a tiny picture. Currently it’s that picture of Stompers. I may change it from time to time as the spirit moves me…

Oh, who am I kidding? We all know I’ll never get around to changing it again! 🙂

Oh…I just noticed we can’t read the comments on past posts anymore. Was I the only geek who was reading the past comments, too? 🙁

(I know I already told you this, Amy, but I’ll post the answer again, on the off chance that someone who wants to read comments on old entries didn’t see your comment and my response.)

Comments on posts close after 21 days (to prevent any spam from sneaking through), but if you want to see the comments on an old post, just click on the post title at the top (usually it’s just the date for that post), and the comments should show up at the bottom of the page. I need to figure out how to make it so that the “comments” link still shows up even if the comments are closed, but I think I’m going to have to actually ask someone!

We love the idea of a whole row of those houses, in different colors of course. May we ask where you find those houses? We’re thinking of adding one to our outside kitty area. Thanks in advance!

I’m not 100% positive, but I think I got it online at Overstock.com. This is the one we have, though they have different sizes. We stuff it with straw, and the cats love it.

Whenever I see a photo of one of the cats in that house, all I can think of is black widow convention! How do you keep something like that free of them?

I spend inordinate amounts of time hunting for and disposing of them. I hate those things.

I check inside the house pretty often, and haven’t seen any Black Widows – or any other spiders, surprisingly. I think maybe with the cats constantly coming and going, the spiders decided to seek less furry places to be.

This is really a question for Oldcat. A friend of mine has a fiber CSA and has gotten two kittens to help offset her older barn cat’s duties.

The male Francis is white, blue eyes, tabby rings of orange on his tail, and almost flame points on ears and face. The first pic on the blog shows his back which is tabby/speckled/I don’t know what. You don’t see it much from the sides. What do call the markings on his back?

The other, Clare, is a black tuxie girl, more spider monkey than cat 😀

Any help you can give would be appreciated.

I, personally, would call that a spotted back, but I suspect there’s a better (more technical?) term.

um.. you no longer seem to have the ‘random’ button..

It’s there, in the sidebar under the “archives” link. It’s just a different color than it used to be.

I kept thinking that first picture, with Maxi glaring through the window, reminded me of something. It finally came to me. 🙂 He certainly seems to be headed in that direction!

What do you do with those egg shells?

When I have a bowl full of them, I run them through the food processor until they’re ground up fine, and then we feed them back to the chickens. The calcium helps to keep the shells hard on the eggs they have yet to lay.

Hm, so will my little boys begin to purr and cuddle if they are separated from their mom? I hate to try to send Honey off, she’s so comfortable – but the boys are way too busy playing to bother purring for a human… which might affect their ability to charm an adopter…and they are all neutered now and approaching 3 pounds.

Since they’re neutered, I think it’s fine to separate them from their mother. It might take a day or two, but eventually they’ll decide that the humans are a good source for love, snuggling, and FOOD. 🙂

Almost looks like you need gloves to protect from all those puncture holes in your hands! Seriously makes you feel for all the momma cats out there..

Robyn, have you considered wearing a glove of some type (leather or gardening)?

I have worn gloves in the past, but I found that the pain of having little claws sunk into my skin was less painful than the annoyance of wearing gloves, so I’ve learned to put up with it. I’ve gotten used to it – but I certainly have sympathy for mama cats. I don’t know that I could put up with THAT kind of pain!

Would you mind going over to Catonsville Cats and reading the review I posted today of the new kitten care ebook by the dailykitten people? I was horrified when I read the contents of the Amazon preview, and I wrote a review there and also put it on my blog. The rescue community needs to be sure to put the word out about this book. It’s shocking. Did you know kittens from breeders are more likely to be healthy and friendly? Sigh. I hope to see more people expressing unhappiness about this book. Thanks…

That is absolutely appalling! Thank you for the heads up on this book, I’m just speechless! (I did click over to Amazon to look at the book, and found the reviews there very well said!) Scorch has turned into the lovebug of the Dragons. He’s not totally comfortable coming downstairs all the time, but he’ll come if coaxed. Yesterday, he was all OVER Fred, who was sitting on the couch in the front room trying to write. “Hey. Puff frenly. When Puff wanna be. You gots food?” “Somebody need to clean this window, lady. I nominate YOU.” It’s a sad, sad thing when the sun melts all those kittens. This is the cage the Starks are in. It’s plenty big enough for them, at least for now. I don’t think they’ll need to be confined for too long. (They get plenty of time to run around and get snuggles after they eat.) Close up, so you can see the pretty blue eyes. Jon Snow, always the first to climb into my lap and demand a belly rub. Brandon demands a belly rub AND that I admire his toes. I wiped her face off, but you can still see her canned-food mustache. Thinking about the best way to get over that wall. Brandon, first to discover the scratcher. Oh, Arya. (This is actually (so far) the only time she’s peed outside of the litter box. And yes, rather than grab her up and put her in the litter box to finish, I took a picture. You’d expect nothing else from me! And I’m sorry, but come on. She’s SO CUTE, squatting there like that!)

Speaking of peeing kittens, I have washable pee pads in three different sizes; I ordered them off Amazon, and they have come in SO handy. I use the 17×24 size in cat beds (we were having an issue with the cat beds being peed on last year, grrrr), under water dishes, and lately as liners for the bathtub when the Starks were in the tub, to make cleanup easier. I use the 34 x 36 size under litter boxes, and now as a liner for the cage that the Starks are in. I think I also used them in the corners of the foster room when the Dragons were small and prone to peeing in corners. I use the 35×80 size on the backs and seats of our couches, have put them on the footboard of my bed (when we were having a spraying issue) and right now I’ve got two of them on the floor of the foster room where the Starks are, instead of rugs. In that picture of Arya peeing, that’s what she’s peeing on. I’d WAY rather she pee on that than on the floor. (I mean, I’d REALLY rather she pee in the litter box but, you know. That wasn’t apparently an option for her at that point in time. She’s a bayyyyyyybeeeeeee.)

They aren’t cheap, especially when you consider that the big ones aren’t Prime shipping eligible from Amazon, so you have to pay extra for shipping, but they’ve come in super handy, and they wash easily. I’ve actually dyed them all (the big ones and small ones are blue and purple, and the 34 x 36 are green) because I didn’t like the white.

Just thought I’d mention that, because they are probably one of the best ideas I’ve had. And, hey – when I get old and incontinent, I’ll be good to go! Oh, Corbs. No one holds a candle to you, you know that?