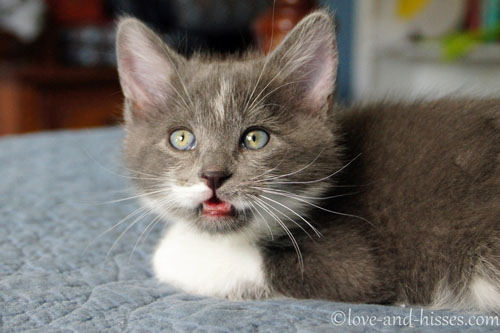 “I HAZ A COMPLAINT AND MY COMPLAINT IS THAT YOU ARE OVER THERE AND NOT PETTING ME!” 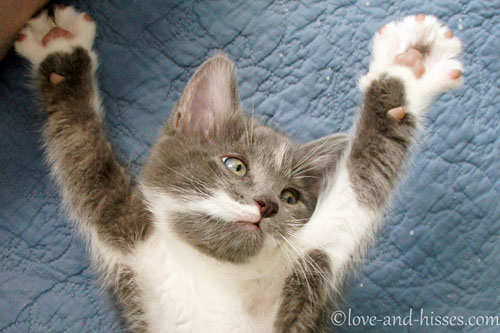 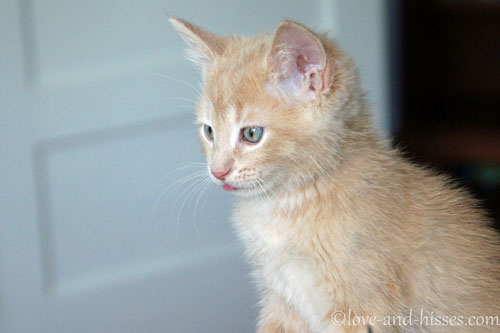 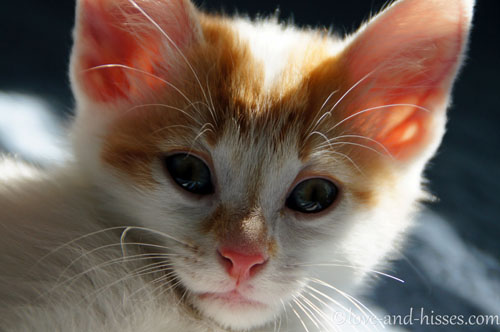 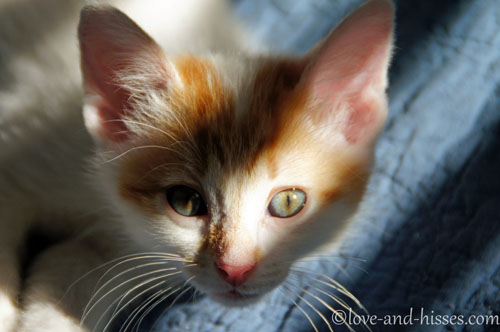 Ember, Puff, and Scorch all look like they may end up with gold eyes – they’re starting to turn gold in the centers, at least. 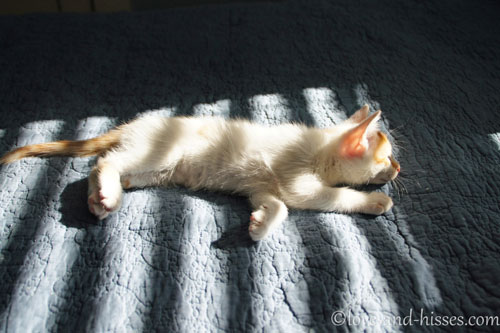 They love laying on Fred’s bed when the morning sun is coming through the window. 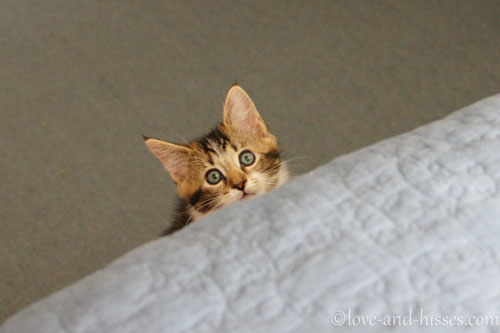 Ruth, considering jumping up on the bed. But she saw me and paused as if to say “Oh. I didn’t know YOU were up there.” 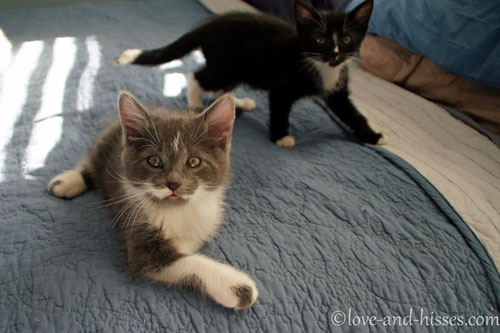 Puff and Norbert, keeping an eye on me. 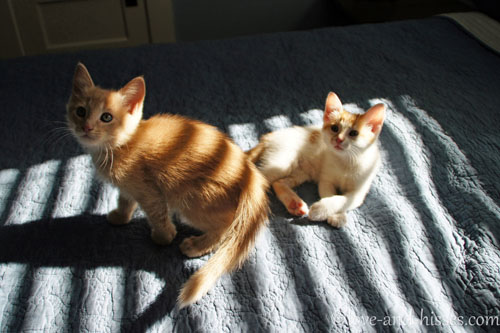 Scorch and Ember, doing the same.

The Dragons seem to be doing okay without Khaleesi. Like kittens tend to do, as soon as their mother isn’t around, they turn friendlier toward the humans. I guess they know that if they want some of that yummy canned food, they’d better be charming to the provider! They haven’t come downstairs at all – I assume that spending three days in a row confined to the foster room reset them, so they’ll take a while to start coming down. Every time I checked on them yesterday, they were all five in the foster room, sleeping on the cat tree. 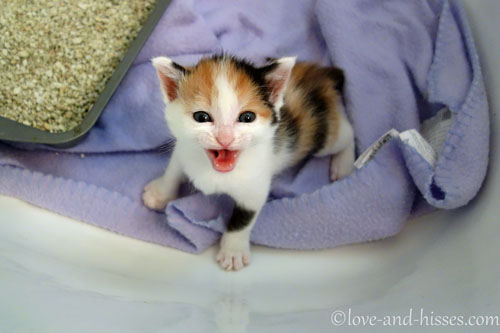 “I HAZ A COMPLAINT AND MY COMPLAINT IS THAT YOU ARE TAKING MY PICTURE AND NOT FEEDING ME AND I YAM STARVING!” 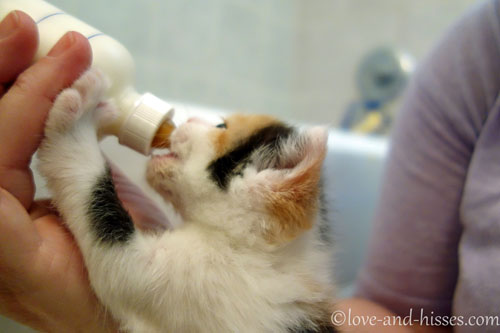 I just love those bottle babies so much. 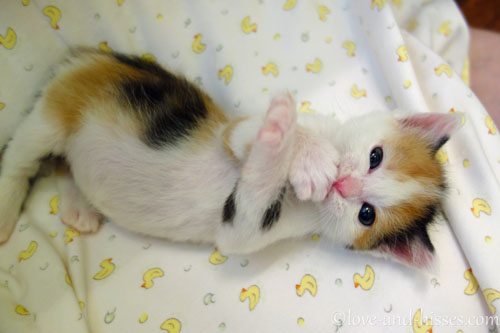 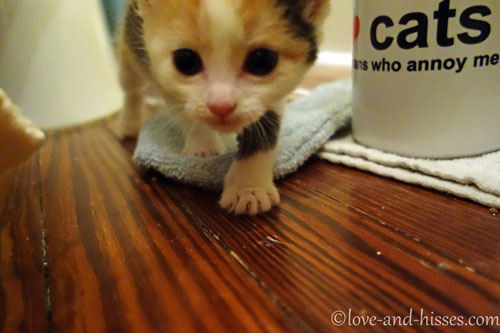 I thought this picture was funny – it looks like the mug says “Cats who annoy Me”, but it’s actually my “I (heart) cats it’s humans who annoy me” mug. I fill it with warm water to keep the bottle warm; I thought that was an appropriate use. 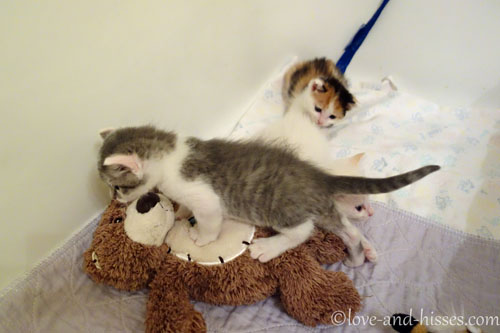 Brandon checks out Mr. Bear. For the record, I’m pretty sure that’s the same bear as in this picture with Terry from 2009:

It’s held up pretty well considering it’s gone through the washer and dryer a LOT, hasn’t it? 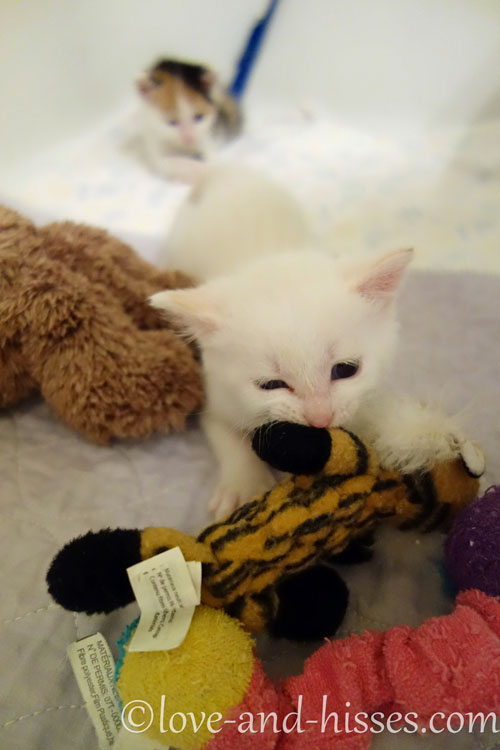 I put a couple of toys in the tub, and Jon Snow lost no time in examining them with his teeth. 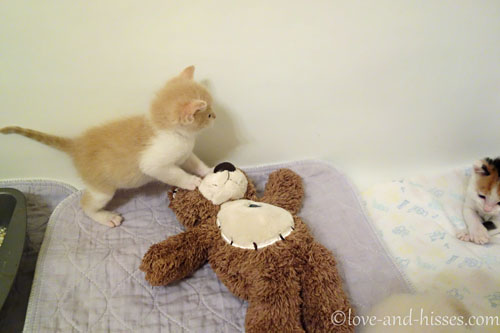 They are just so freakin’ adorable. The little round bellies are killing me. 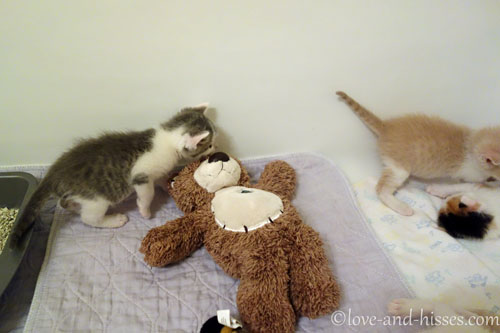 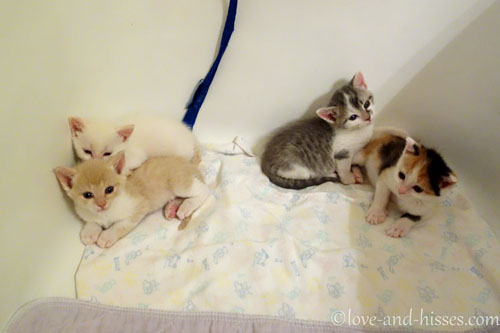 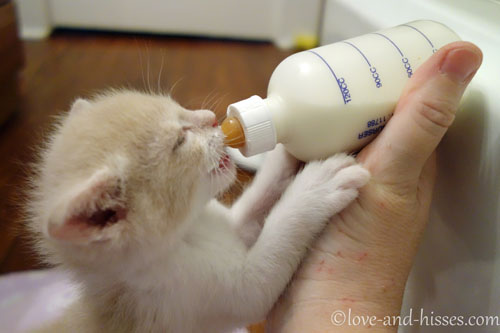 The older they get, the taller they want to be while they have their bottle. They all started out on their tummies, and now they want to stand on their tippy toes while holding my hand in a death grip. 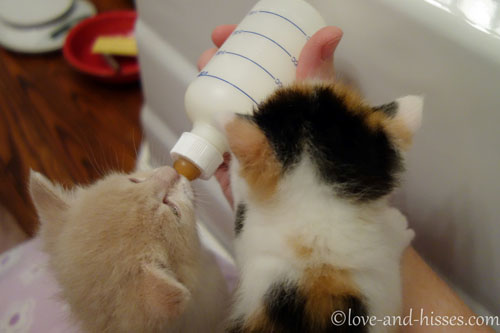 Arya’s always the first one to eat because if she isn’t, she gets pretty hysterical. So she eats, then she goes off to explore, and then she comes back for some more bottle. Imagine her dismay when she saw that THIS was going on. She was all “HEY! Get away from that, that’s MY bottle!” 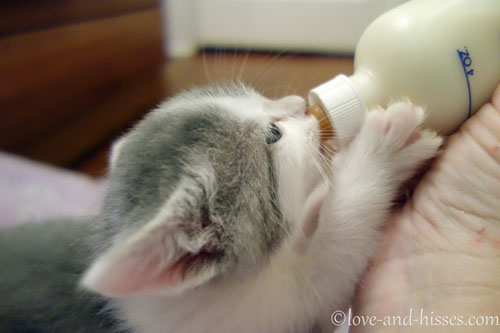 Brandon’s the best eater, but he eats slowwwwly. I tend to feed him last, so the other kittens don’t starve while they’re waiting for him to finish his leisurely turn at the bottle.

Yesterday I not only moved the Starks to the cage in the small foster room upstairs, I also tried getting them interested in canned food again. None of the boys were interested in the canned food (which was mixed with baby food and a little formula), but Arya dove into it and ate and ate and ate. Then she came to me for a turn at the bottle, explored the room, walked past three litter boxes, and then peed on the floor. Whatcha gonna do? She’s still a baby, after all. 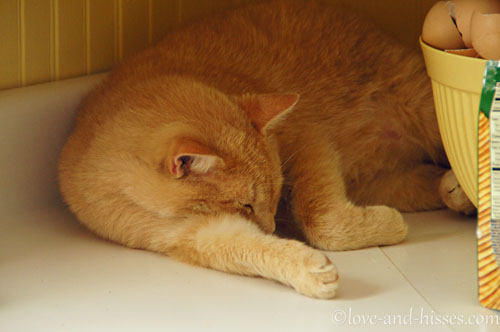 On those long, hot summer days, Newt has determined that the best place in the house is in the corner of the kitchen, on the counter by the bowl of egg shells. He’s so quiet that very often I don’t realize he’s there. His other favorite place to sleep – usually at night – is in the sink.