Can you recommend a feral cat house. I live in Louisiana and have been following you for some time now. I love all the pictures you post of the fosters and permanent residents. Any suggestions would be greatly appreciated

We have this house on the front porch for Trixie and Rocco, and they use it all the time – they sleep on top of it, and occasionally Trixie likes to curl up inside. I like that the door on the bottom level (which they can get to from the middle level) only opens outward – so that they can be safe from any wandering animals (though all we ever see on the front porch other than Trixie and Rocco is the occasional raccoon and a couple of possums. However, I am not entirely sure how that tower would hold up in the elements – it’s on a porch and sheltered from the worst of the rain and wind – so it might not be the other solution.

The other kind of house we have – which of course is no longer available – is this house. We have several of those, and have had them since 2015. They hold up well in the weather, and we like to keep them stuffed with straw. They’re not actually used by ferals here – we have one on the front porch and a couple in the back yard for our cats – but the cats like them quite a bit. This house looks pretty similar. Lastly – and much less expensive – is making a feral shelter out of storage containers. There are instructions on this page. Depending on just how cold it gets in Louisiana, you might just cut a hole in the side of a storage container and stuff it with straw and call it good enough. (We did that when we lived at Crooked Acres – we had a straw-stuffed container under our porch that the occasional passing cat would use. Also, a raccoon would sometimes use it, too.

Now that I’ve said all that – if anyone has suggestions for good feral houses, please feel free to chime in!

How do you get them all to thlurrrp at once? I’m sure there’s Churu involved, but doesn’t the first one finish thlurrrping by the time the last one gets there Churu? (BTW, my Allie is not at all interested in Churu!) 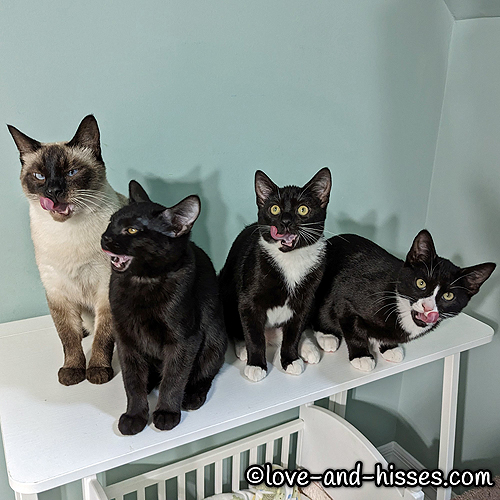 You know, they just kinda do it on their own. I give each of them a slurp of Churu, then stand back and wave my arm around, and they sit there and thlurrrp while I take pictures as fast as I can. Sometimes I get nothin’, and sometimes I get a good one!

Did Newt get a special something after Trixie claimed the entire clean-up for herself? Poor old man.

Oh, believe me, Newt did NOT go without. As I recall, Fred went into the kitchen and got him a few treats to soothe his hurt feelings!

Not that I’m in ANY hurry to say farewell, but it seems like the remaining Gatos have been with you somewhat longer than usual? Will they be going to Petsmart, or are they going to stay at Casa RobynAndFred for the holidays?

I think they’re going to end up having to go to Petsmart, though I don’t know that it’ll be before Christmas. I don’t think there’s room for them yet (and maybe we’ll have a Christmas miracle and they’ll get adopted before room opens up? A girl can dream!)

Nacho does indeed has a purrrrrr. 🙂 Is that a second kitty with a purrrrr I hear in there as well, or is that all her?

I believe Francesca was lying next to me, so she was likely purring too (though I can’t remember for sure!)

I was wondering if you noticed a timeline trend with kittens – at 1-2-3 age they do xyz. We recently pulled a (now) ten week old kitten from the strays we have been sheltering. Sumatra (her daddy is most likely Espresso, momma Wee Babe, two siblings – Breve and Kona) has seemed to hit the hiss and spit age along with the practice of a floof suit. I never noticed her doing these outside before now, so I was curious if maybe age had something to do with when she has started these.

I don’t think I could sit down and write a list of when they do what, but I think that the hiss-spit-floof stage usually starts a bit sooner than 10 weeks – I want to say 6 weeks or so? But it really all depends on the kitten – different kittens do things at different ages. Depending on how long you’ve had Sumatra inside, it could just be her coming to terms with her new environment and learning how to best utilize her defense responses. (PS: I love the names!)

A couple of times a week, I do a thorough vacuuming of the foster room (the other days I sweep what needs sweepin’.) Before I vacuum, I get as much stuff up off the floor to make it easier. Usually when the kittens see the vacuum cleaner they vamoose into another dimension. But yesterday, while I was in the process of picking up the room, I turned around to see Saul on top of the Nacho’s Fish Market house, which was on top of the taco truck, which was on top of the desk. That doesn’t look dangerous at ALL. 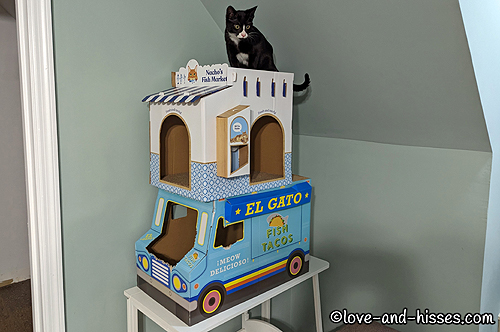 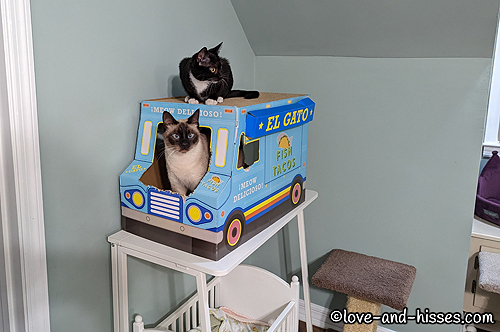 Then while I was moving the Fish Market scratcher, Kim and Nacho took up residence in and on the taco truck. 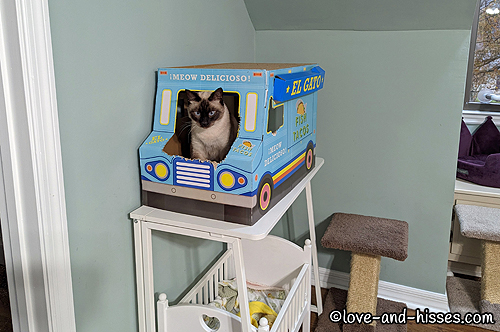 Nacho took off to play, and Kim was left pondering just how the customers were going to get to the taco truck. 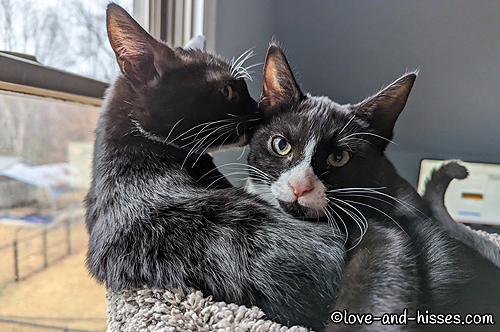 Tuxies (Nacho on the left, Saul on the right) tellin’ secrets. 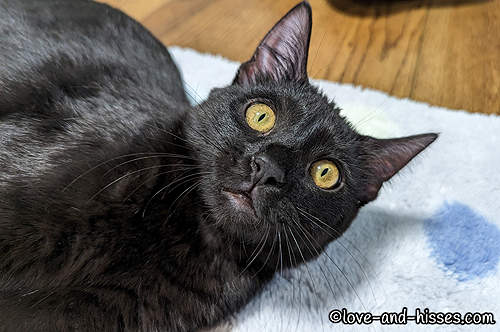 Francesca and those beautiful eyes. 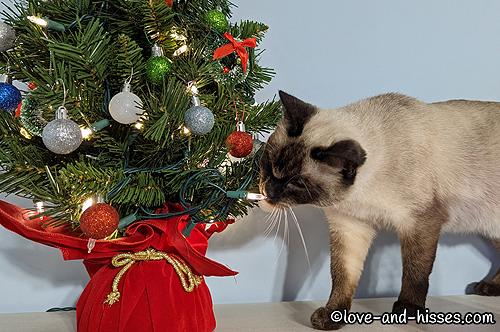 I tried to get a nice picture of Kim sitting next to the little Christmas tree, and she was too interested in checking out the tree to pose for me. 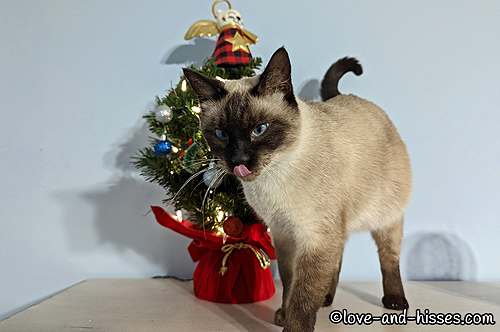 “That tree is kinda tasty, lady.” 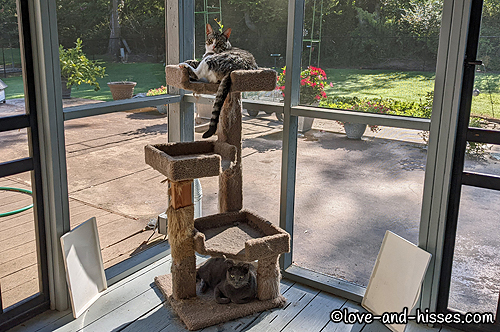 Charlie (top of the cat tree) and Jake (on the bottom), from back in August when the sun was shining and my Mandevilla were in bloom. They LOVE that cat tree (which is why it’s such a hot mess.) 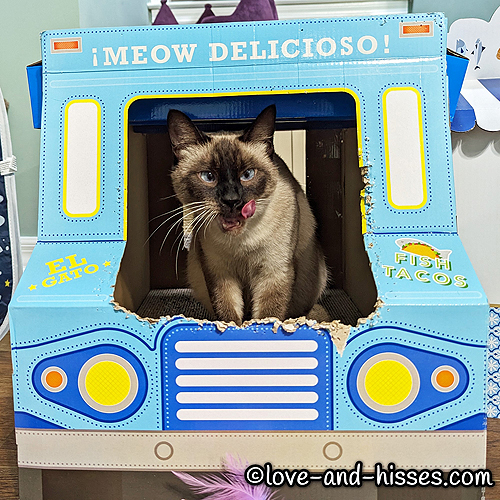 It’s Thlurrrpsday, and who better to start it off than the Queen of Thlurrrping? Kim always has excellent form. 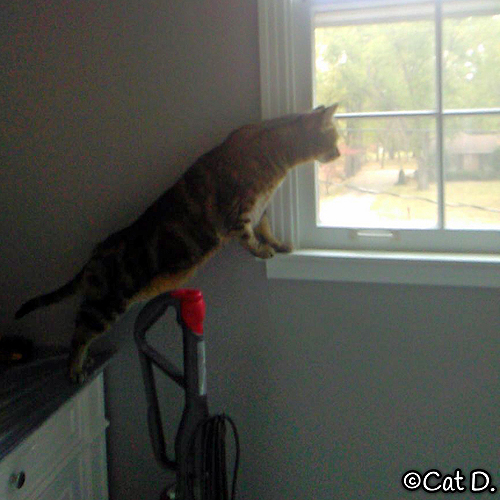 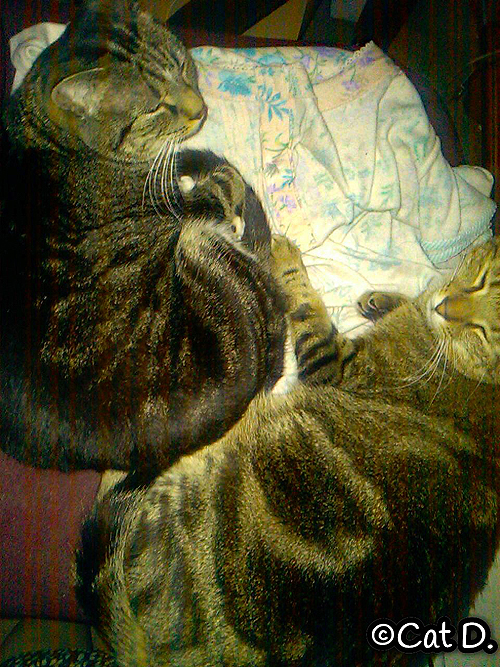 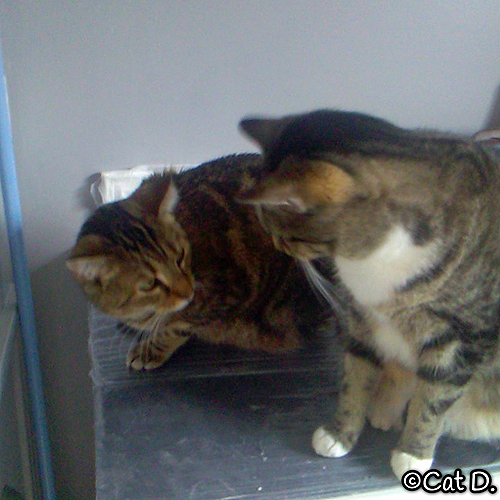 Look who it is! It’s those sweet babies Rhus and Oleander (formerly Mewsketeers Rochefort and Constance, 2020) and they’re all grown up!⁠

Cat reports: “oleander and rhus continue to take their muffinjobs very seirusly. recently rhus has taken it upon himself to stand on a laundry basket and supervise the naborhood from the window. oleander snoopervises evry single step of the bathroom remodle and makes sure that her pawpaw is doing it all right. she also has to check to make all the screwdrivers roll across the counter to her satisfaction. they continue to have daily zooms around the house, and can often be found in the bay window telling those squirls whos boss.”⁠

YouTube link
Throw Back Thursday: From 2020, Lola Bunny had the crazies. Look at her go! (Also seen: gray and white Bugs Bunny, floofy orange and white Clyde Bunny, and black Benjamin Bunny. They were from the Fluffles litter, most of them kittens belonging to mama Bunny. Clyde (and his sister Cutey, not shown in this video) were add-ins. This whole litter went in pairs – Lola and Bugs together, Honey (not shown) and Benjamin together, and Clyde and Cutey together.) 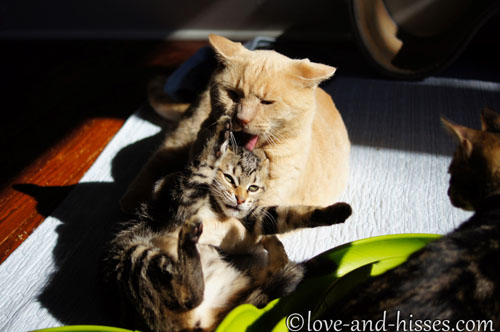 Throw Back Thursday: From 2016, Chesnee (from the Carolinas litter; kittens) got a bath from Uncle Stefan, and she did not appreciate it.

YouTube link
Tossing toys for kittens, but mama Kim Wexler is right in there too (except that she keeps getting distracted by the track toy!) 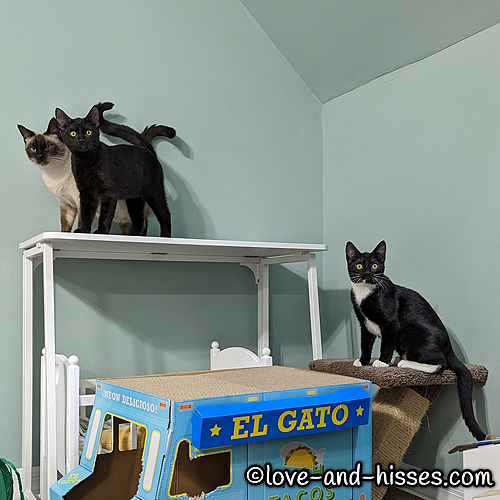 “DID SOMEONE SAY ‘CHURU’?!” (Kim, Francesca and Nacho are waiting (im)patiently.) 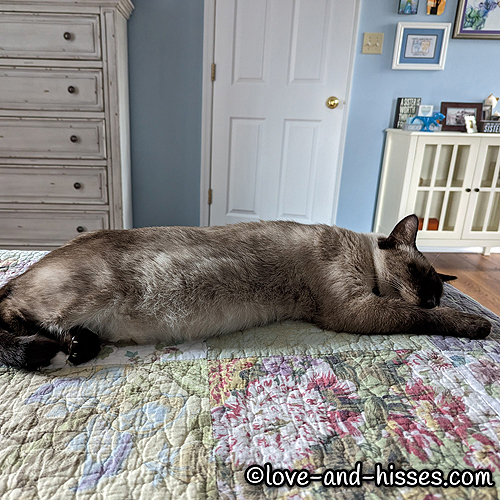