In case you missed it on social media, Mike – he is now Milo – was adopted yesterday and went home. He is now a resident of Arizona, and has new kitty siblings that include Rummy and Slapjack, Canasta’s kittens! They have a Facebook page and an Instagram page, and there have already been a few posts.

Mike decided to be a scaredy kitten when they showed up yesterday (to be fair, he’d only had a light breakfast a few hours earlier, and then I took the food away, so he was already suspicious.) By the time they needed to hit the road, they were able to touch and handle him, but he was still skittish (since it’s just Fred and I here, kittens tend to just see the two of us, so have a healthy Stranger Danger perspective. Kim was happy to get some love, and Saul played too, though Nacho mostly sat back and looked skeptical, as is her way). Judging by the pictures of him at home, it looks like he got over THAT. I can’t wait to see how the introduction to his new siblings goes!

Today’s post includes the last of my Mike pictures. 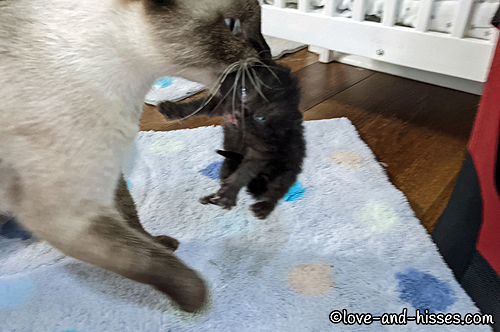 I haven’t shared this picture before because it’s not the greatest – so blurry! – but I took this picture when Mike was about a week old. I was weighing him, he yelled, and Kim said “I’ve had enough of this nonsense, I’m taking this baby back to the crate” and she picked him up and did so. That look on his face is just cracking me UP. 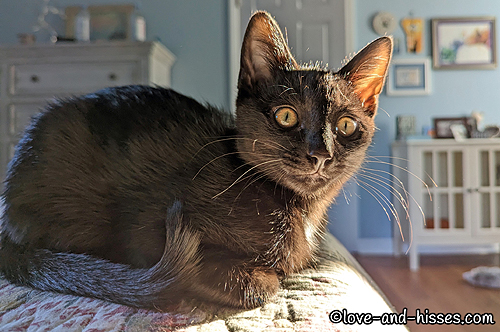 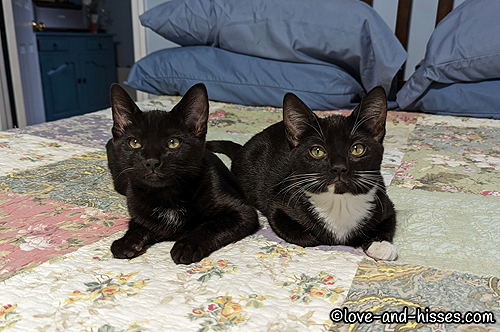 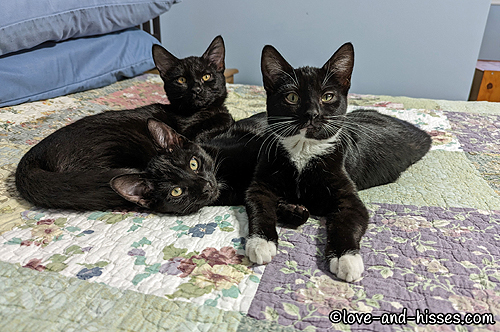 And snuggling with Francesca and Nacho. 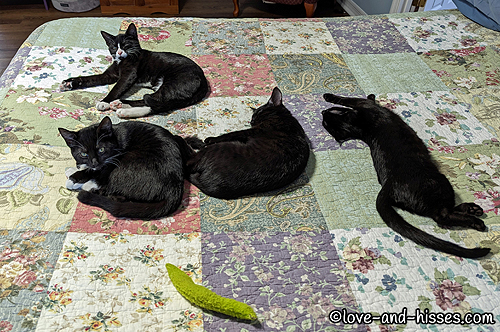 Nap time on the electric blanket (that’s him on the far right, stretched out.) 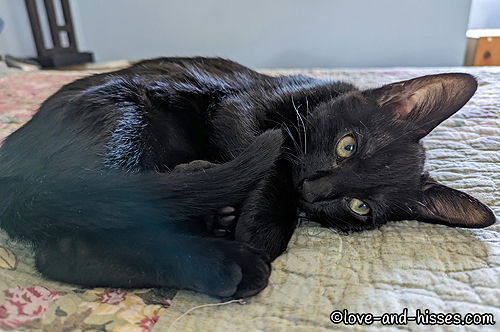 The look he gave me after I told him he was the perfect little muffin. 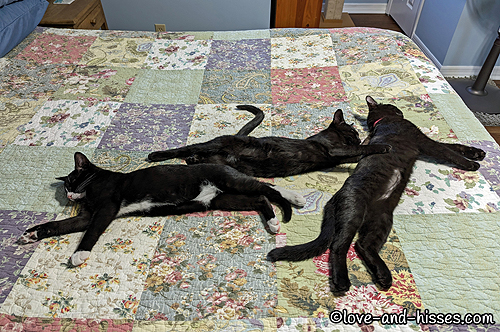 Snoozing with Nacho and Francesca again. 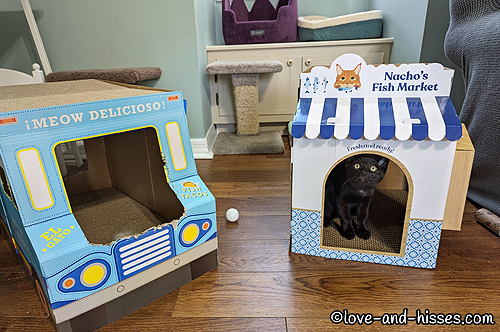 Checking it out. (Yes, that “Nacho’s Fish Market” house is brand new, it came from here. Someone mentioned it in the comments on Facebook (I think), and someone else decided we had to have it, and surprise to me! I mean, if you’re going to have a fish taco truck, you’ve gotta have a good supply source, and I think this is perfect. By the way, it wasn’t until I was putting the house together that I realized the Nacho in this instance happens to be Bobby Flay’s cat. Nor did I realize until just now when I was looking for the link that I discovered Bobby Flay sells cat food. Ya learn something new every day!) 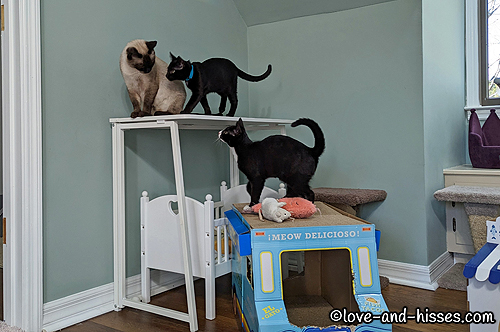 Mike lets Kim know that the fish market is well stocked, so she’s all set. (Mike wore a collar for a couple of days before he left, so he’d be used to wearing it. That bright blue looks good on him, doesn’t it?) 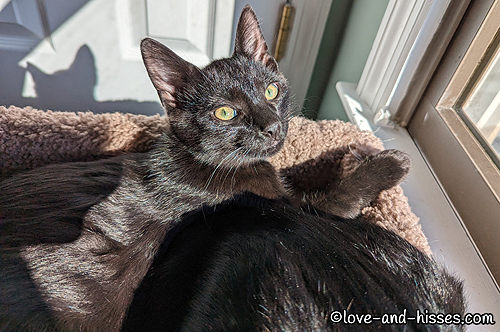 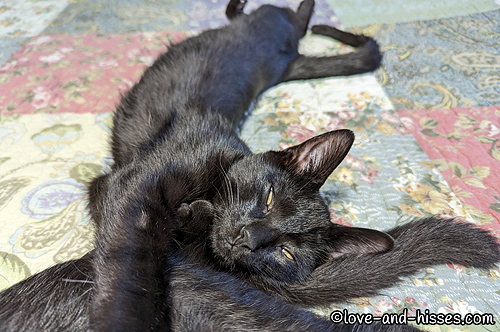 Another snooze (using Francesca’s butt as a pillow.) 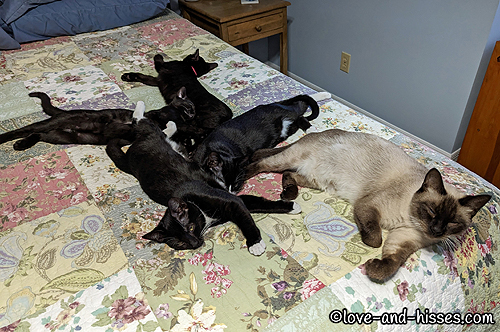 And one last sleepy family portrait wherein everyone enjoys the electric blanket. 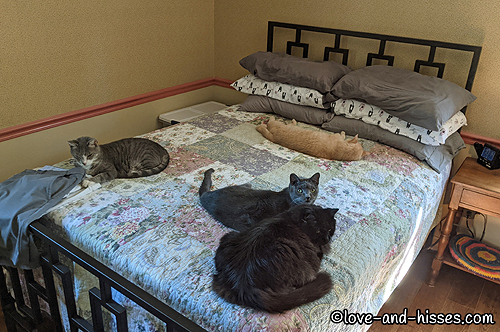 You know it’s cold outside when you see this many cats sharing the bed. That’s Archie on the left, Newt up by the pillows, Jake giving me the eyes of “What do YOU want?”, snuggled up to Khal. 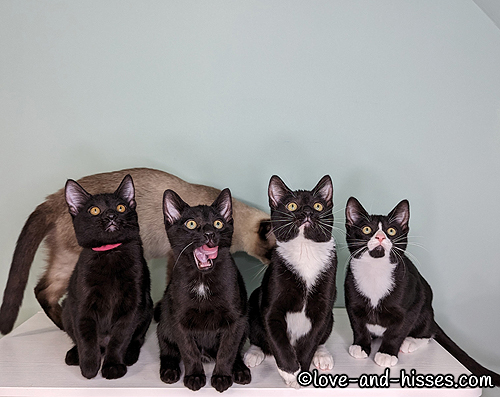 Family portrait, kinda. (Kim is present, even if you can’t see her face. That’s a win, right?) From left to right: Francesca, Mike, Nacho & Saul. 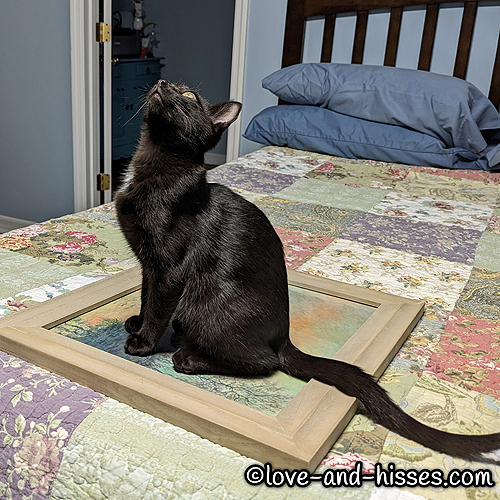 Just a guy, sitting on a framed picture, flirting with the ceiling fan. You know, the usual. (Mike)

YouTube link
Sleepy little slackers. Mike, Francesca and Saul are on my bed – and yes, I did turn the electric blanket on for them. Kim’s on the heated doll bed (there’s a heated pad under her), but Nacho prefers the cold, apparently. 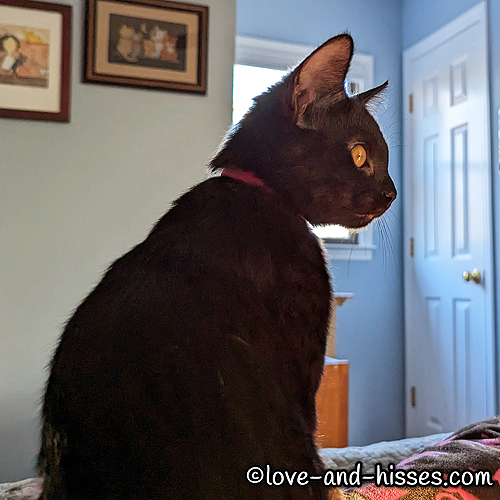 Francesca’s eyes are just so PRETTY. 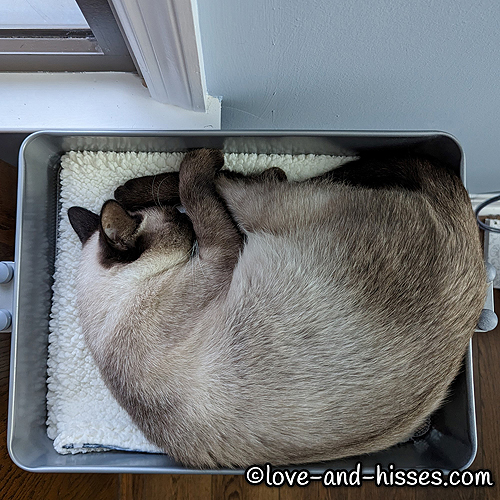 YouTube link
I’m tossing toys, the kittens are jumping… and Kim Wexler is watching it all from atop her ham-mick. 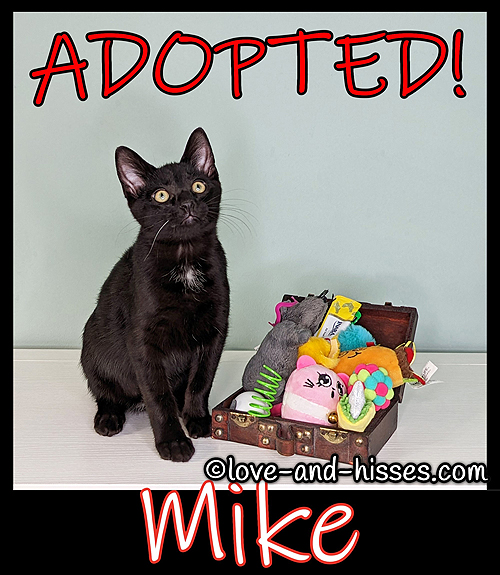 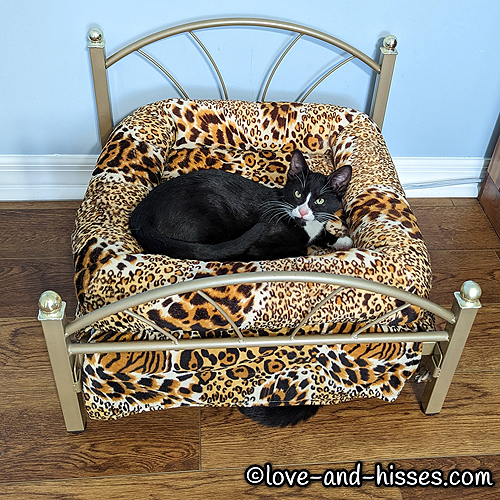 Good night innernets. (Saul… and Nacho’s playing the role of The Monster Under the Bed tonight.) 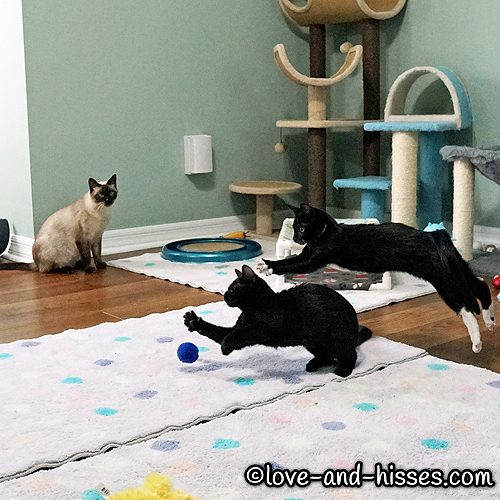 Nacho and Francesca are leapin’ into the day!

YouTube link
Yesterday Mike was adopted and went home to Arizona to join former fosters Rummy and Slapjack. Mike is now Milo – and here’s his video of pictures from the day we said hello to him (August 4th) to the day we sent him home (November 19th.) We know without a doubt that that boy is going to have one wonderful life. ❤

YouTube link
Mike (now Milo!) was adopted and went home to Arizona yesterday – you can follow him at @az_cardsharks ! I was going to do a video of his entire time with us, but that would have been a half hour video at least, so instead here’s a 3 minute video of him when he was tiny. (You can always go to my YouTube channel and click on the “Mike” playlist to see more!) 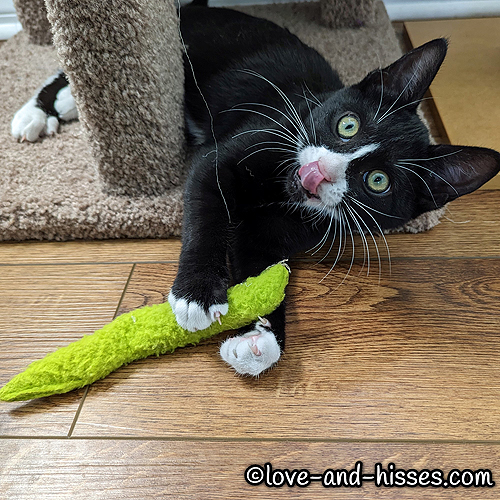 Have I mentioned that Saul loves that green bean toy (from CatLadyBox)? He does indeed! 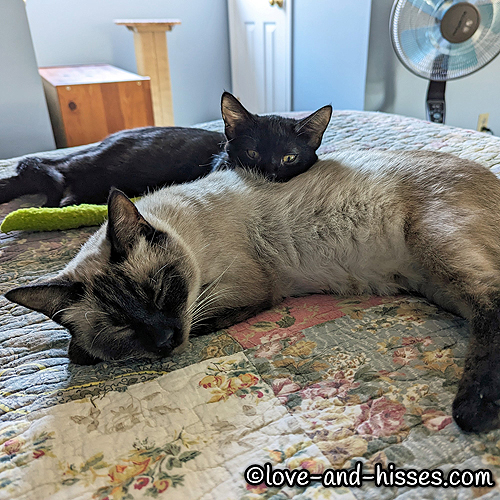