Note: You may (or may not) have noticed that the sidebar is shorter than it was. In an attempt to start a redesign on the site (because the WordPress theme I’ve been using hasn’t been supported by the creator for 7+ years, which means that I’ve spent the past 7+ years ignoring the fact that I need to redesign the site, because that’s just how I am) I accidentally deleted the entire sidebar, so am having to recreate it. I had hoped to get it mostly back to the way it was by this morning, but it was a busy weekend, so give me a few more days. 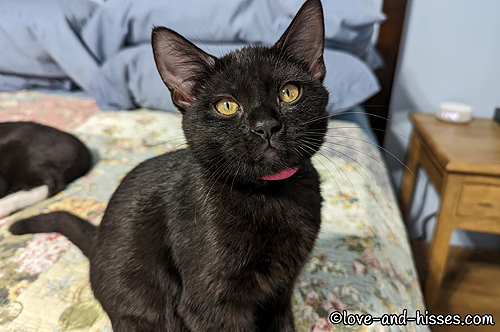 Francesca’s all “I could redesign your site, but you can’t afford my fee.” 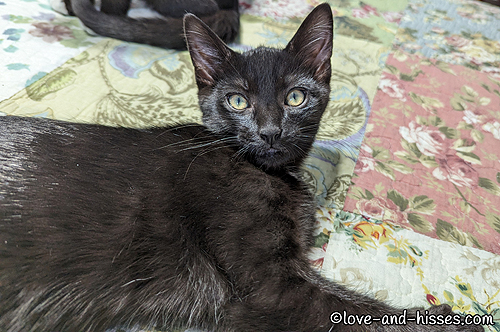 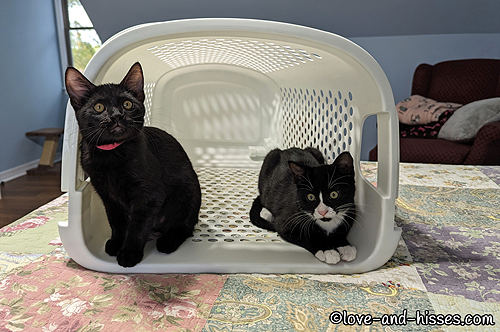 At least I had help with the laundry again. Francesca and Saul: the best laundry helpers ever! 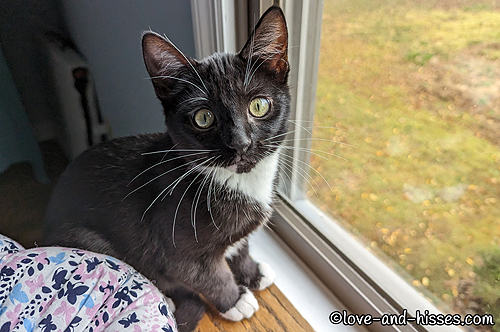 Nacho was busy watching the birds out the window. 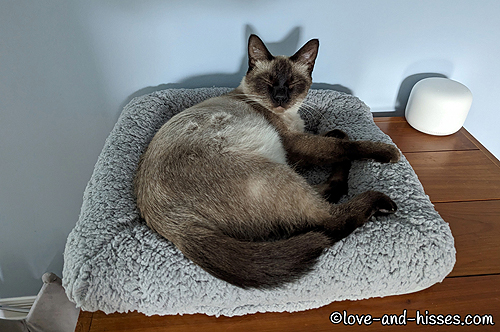 Kim was busy snoozing and was all “Besides, haven’t I done enough for you already, lady?” 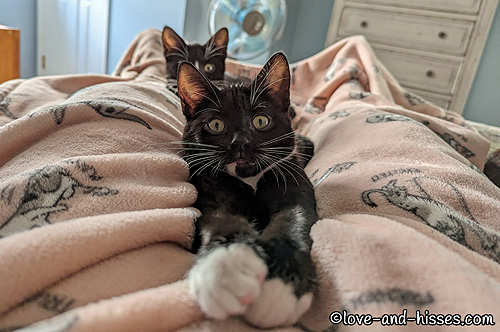 A quick nap with tuxies (Nacho front and Saul back) was just what my weekend needed. 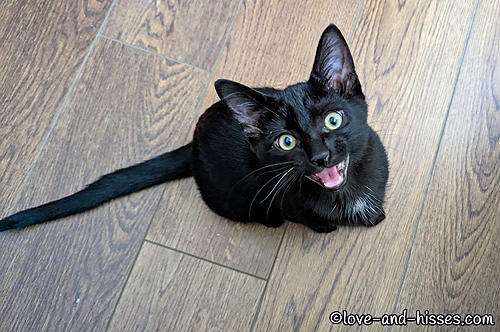 This is what Mike does when I’m at my desk: he sits at my feet and complains until I pick him up and put him in my lap. Then he stays there, sometimes dozes a bit, until I get distracted and then he is UP on my desk, stealin’ pens and trying to tromp all over my keyboard. He is one pen-stealing fool, that boy. And I can’t even get annoyed at him, he’s just TOO CUTE. 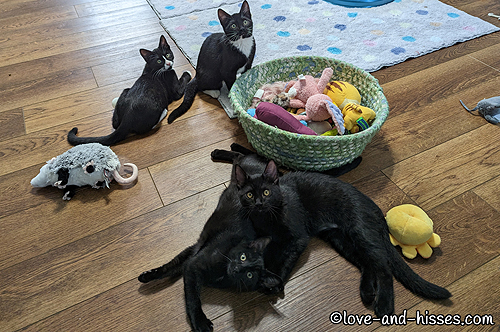 Tuxies in the back (Saul, left, and Nacho) and housepanthers in the front (Mike, left, and Francesca). 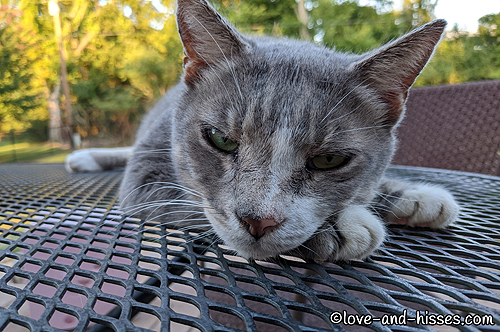 When I took this picture in August, Archie was sure it was going to be summer forever. Yesterday morning, he found out that winter is here (it was barely above freezing yesterday, and isn’t going to be much warmer this week.) 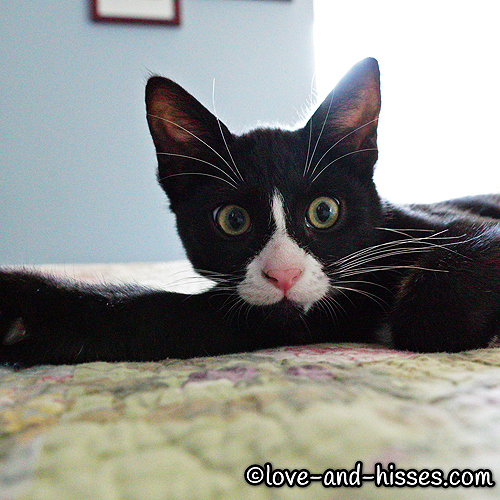 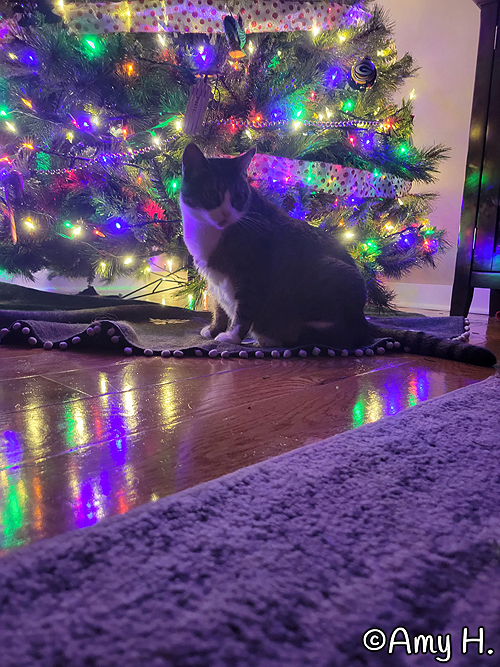 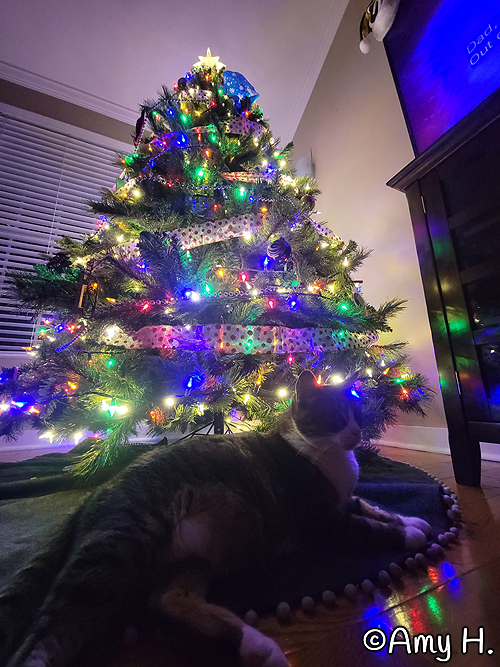 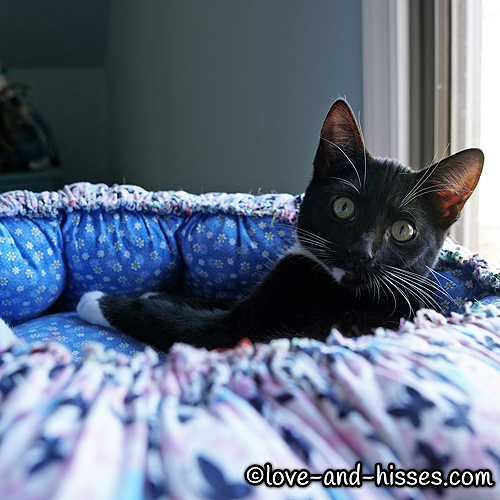 Nacho’s all “Excuse you, tryin’ to nap here.” 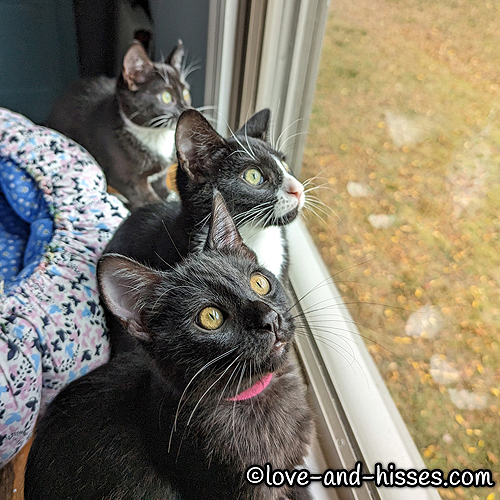 Nacho, Saul and Francesca, watchin’ the bugs fly around outside the window. So fascinating!

YouTube link
Permanent resident Archie, who has long protected us from sassy (and occasionally life-threatening) dish towels, recently learned that there’s a new threat in the house. Now not only does he keep the dish towels in line, he makes sure that the bath towels (and hand towels and washcloths) know who’s in charge as well! 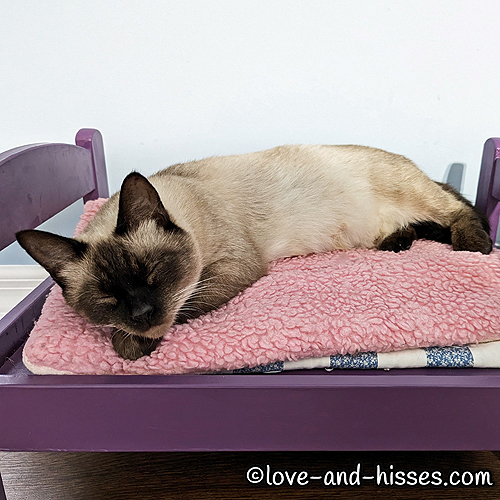 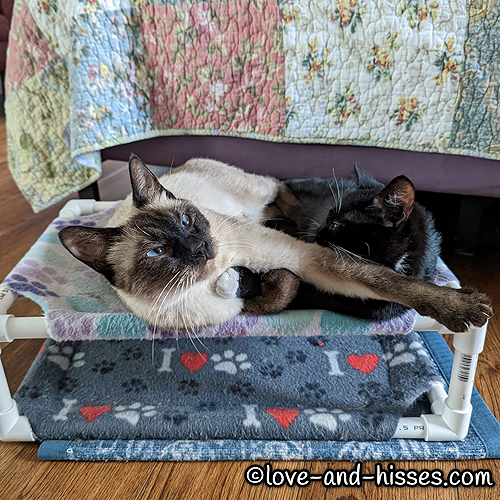 Kim (who is clearly thinking “WHEN are these children going to go off to college and leave me in peace?!”) and Nacho have a snuggle on the ham-mick.

YouTube link
I love watching Kim play (and then call to her kids to come eat what she’s “killed” for them.) 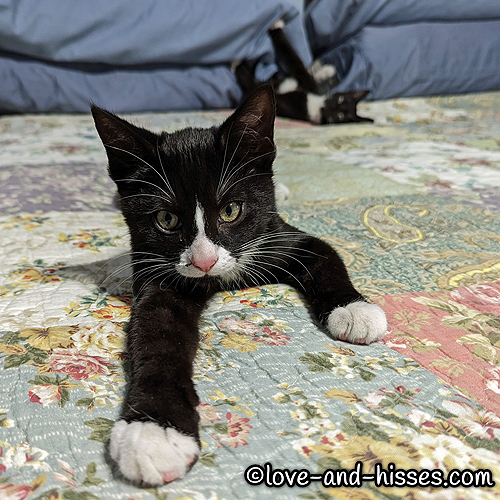 I think we’ve got a lights-on, no-one-home situation here with Saul. (And I love that I caught Nacho in the background wrestling with the pillows again!) 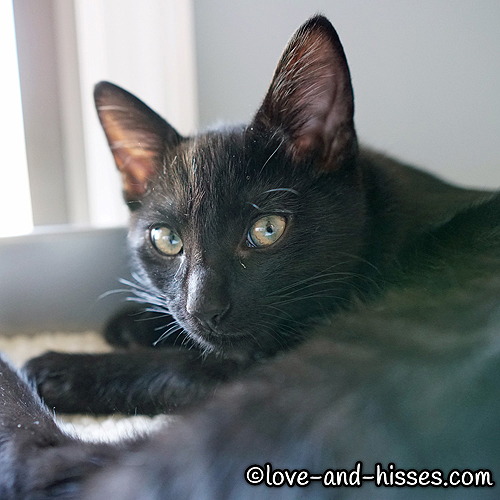 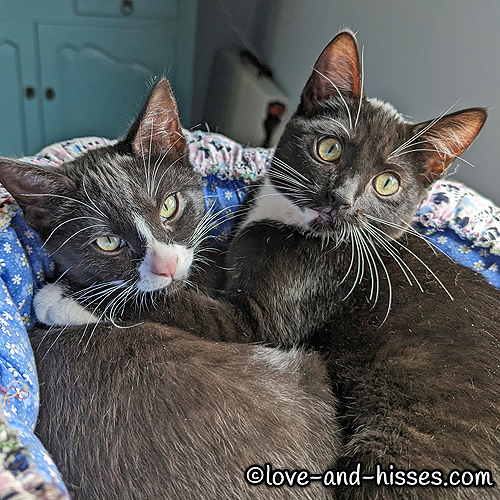 A bed full o’ tuxies is the best way to start the morning (Saul on the left, Nacho on the right.) 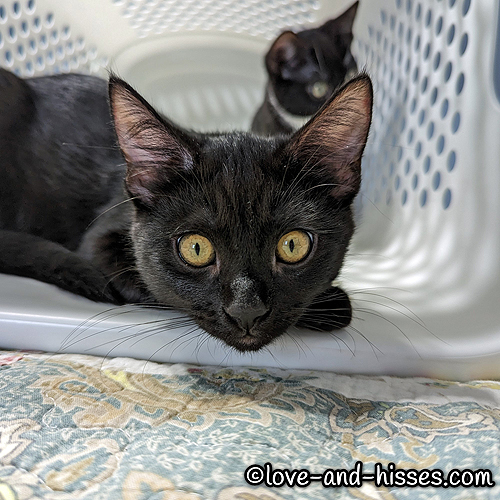 Francesca’s ready for more laundry to sleep on… Uh, I mean FOLD. She wants to fold the laundry, not sleep on it. (Suuuure.)

YouTube link
It’s always play time in the kitten room, and if you think I could sit here all day and watch ’em play, you are SO RIGHT. They’re so fun! 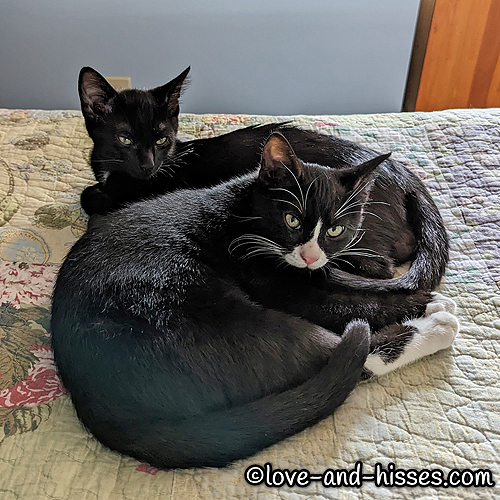 Mike and Saul have a snuggle. ❤️ 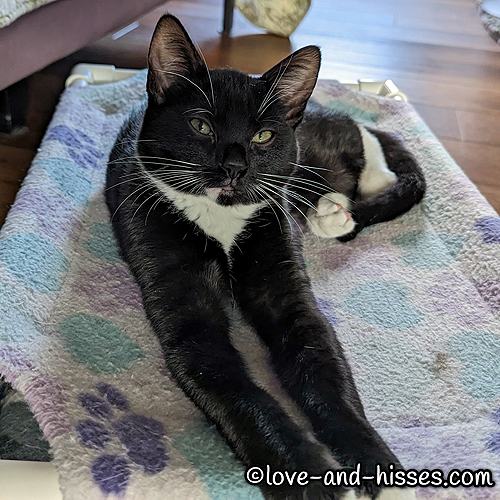